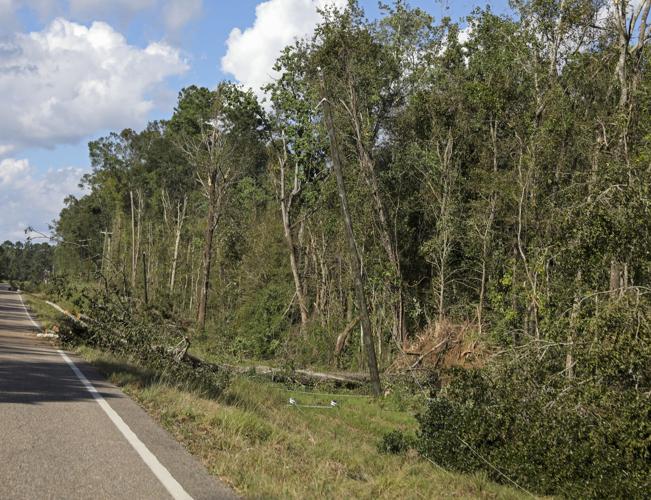 Fallen trees pull down power lines along a roadway in the aftermath of Hurricane Ida in St. Helena Parish, La., on Tuesday, August 31, 2021. 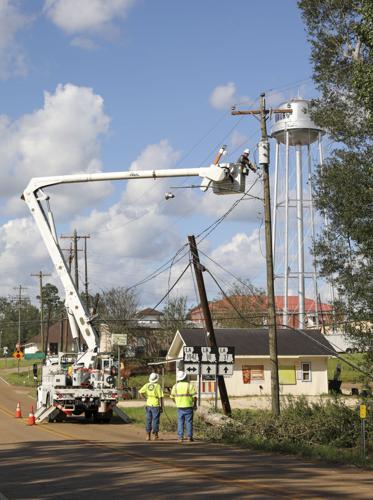 A crew works on restoring power in the aftermath of Hurricane Ida in Greensburg, La., on Tuesday, August 31, 2021.

Louisiana National Guard vehicles sit in the parking lot of the St. Helena College and Career Academy in the aftermath of Hurricane Ida in Greensburg, La., on Tuesday, August 31, 2021. 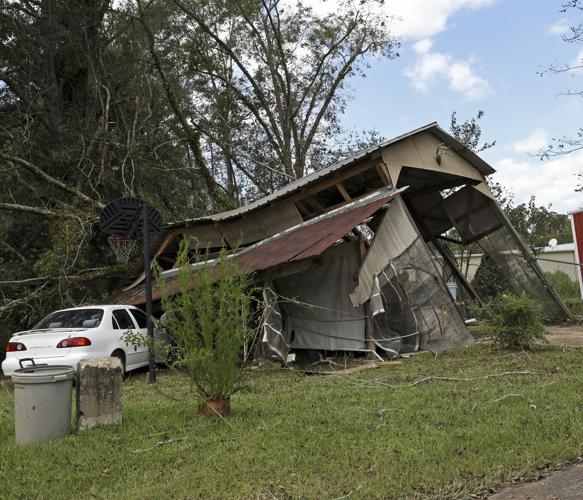 A fallen tree crushes a shed and a car in the aftermath of Hurricane Ida in Pine Grove, La., on Tuesday, August 31, 2021.

Two weeks after Hurricane Ida felled countless trees and electrical lines, nearly half of St. Helena Parish still lacked power. And the outages were expected to continue through the end of the month, leaving residents without air conditioning, refrigeration and other vital services.

Forty-eight percent of St. Helena’s 6,955 utility customers — 3,397 accounts, which could include a single person, a family or a businesses— still had no power on Friday, Louisiana Public Service Commission data show.

While DEMCO restored energy to customers in the Greensburg area last weekend, persistent outages left swaths of the parish’s southern band near Montpelier and Pine Grove without power.

“Honestly, what we’re really having to do is rebuild our electrical grid,” Louisiana Rep. Robby Carter, D-Greensburg, said. “What was left behind was hardly salvageable.”

Most of St. Helena’s 10,920 residents never imagined a hurricane coming so far north with such terrifying force. But in a particularly hot summer fueled by climate change, the warmth of Louisiana’s wetland coast allowed Ida’s winds to retain strength all the way to Mississippi.

St. Helena’s energy infrastructure was gutted in its wake.

How powerful was Hurricane Ida? Its hurricane-force winds didn't stop until it hit Mississippi.

Gusts tore thick black power lines off of their poles and left them strewn across roads. Some telephone poles were shattered in two. The storm uprooted pine trees — some whose roots extended more than 10 feet below ground — rupturing buried fiber cables that transmit internet signals.

Rebuilding the power grid has turned out to be a “massive undertaking” by state, parish and federal agencies in the two weeks since Ida touched down, Carter said.

A stream of Louisiana National Guard members who first arrived in the parish last week have cleared hundreds of downed trees from roads so linemen can access and repair splayed power lines and poles.

Meanwhile, a Federal Emergency Management Agency disaster recovery center has gone up in Greensburg, offering residents a place of relief from the September heat that many are battling without air conditioning.

For those who have generators, the costs of staying cool are beginning to stack up.

“It gets expensive if you’re constantly buying gas,” emergency director Roderick Matthews said. “This is already a low-income parish, and with people expending so many resources to stay cool, that’s going to have long-term effects.”

The St. Helena Parish School District said on Sept. 3 that it would call employees back to its three buildings next Monday. Classes are set to resume Sept. 27 — but only if 80% or more students across the district have power by that date.

Other parts of the parish’s infrastructure are steadily returning to normal. Lines at gas stations have shrunk. Mail has begun trickling back, albeit sporadically, residents said. While some residents’ water access was cut off in the storm’s immediate aftermath, those on public water systems have since seen access restored.

Marie Morgan, a Pine Grove resident and DEMCO customer, has gone without power since the weekend of the hurricane. She and her husband, Bobby Morgan, feel lucky to have a generator they've used to stay cool in their home.

Demand for gas has dipped in recent days; so keeping the cool air flowing hasn't been too difficult, she said. But the couple hasn't been able to do laundry or take warm showers for two weeks.

Morgan is steeling herself for up to three more weeks without electricity.

"It's just a matter of being patient, and being uncomfortable for a little while longer," she said. "We know this too won't last forever."

In a parish whose landscape is largely shaped by rolling hills and thick pine forests, removing toppled limbs from roads was the first step in refurbishing the power grid. The Louisiana National Guard has been key in clearing those arteries, said Carter.

“I don’t know what we would’ve done without ‘em,” Carter said. “Otherwise, it might have taken months to clear those roads. And without the roads cleared, there would’ve been no way to begin clearing power lines.”

He initially feared a halt in mailed paychecks could leave residents strapped for cash to buy necessities. But banks have reopened and resumed direct deposit payments, he said.

Matthews encouraged residents who need help to come to the emergency center located at 7067 La. 10 in Greensburg.

Mini-pods remain open at fire stations parish-wide where people can collect tarps, ice and ready-to-eat meals. And those who need shelter can report to 31676 La. 16 near Amite.

Homeowners in East Baton Rouge Parish and nine other parishes have been authorized to get free, temporary roofs in the wake of Hurricane Ida, …