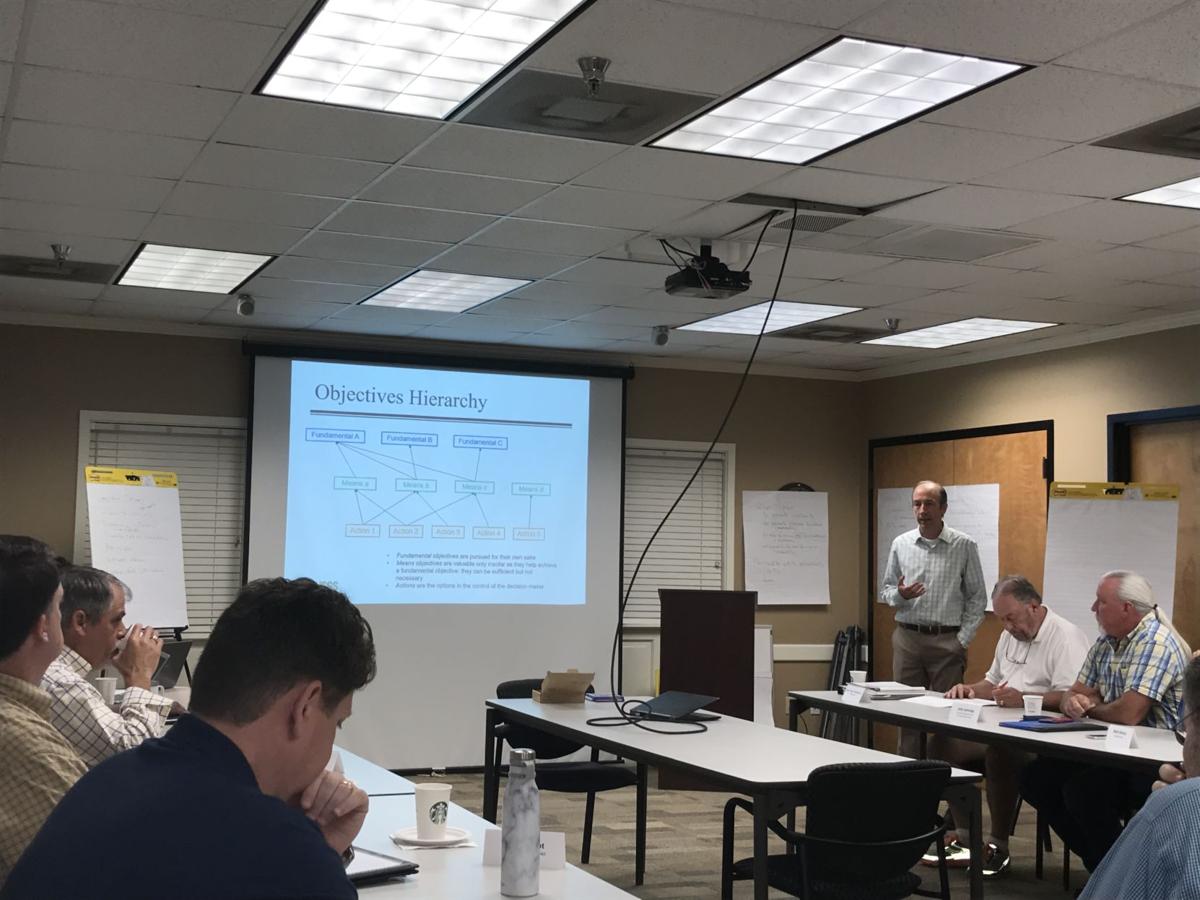 U.S. Geological Survey facilitator Michael Runge took to the drawing board after nearly an hour and a half of discussion by regional groundwater commissioners about long-term objectives for the Southern Hills aquifer.

Sketching a water tank on a large paper pad, and pipes carrying water and salt in and out of the tank, Runge was creating a simple metaphor of the multi-parish aquifer and the demands on its stressed supply for members of the Capital Area Groundwater Commission.

The aquifer is the Baton Rouge region's primary drinking water source and also a critical supply of clean water for major industries on the Mississippi River, but it threatened by salt water intrusion exacerbated by pumping from an array of users.

Coordinating an effort to develop a 50-year strategic plan for the commission's management of the aquifer, Runge's picture was an attempt to provoke thought about a bottom-line question commissioners must answer for the plan to proceed.

What water level in the tank, or the aquifer, is sustainable and builds in resiliency against droughts and other calamities over the next 50 years, Runge posed to the commissioners through an extended dialogue Friday.

Was it, Runge asked, an earlier, higher water level likely to ensure less salt water could enter through one of the pipes emptying into the metaphorical tank, or a lower water level that was still stable but might allow more salt through?

"It's a graphic illustration of where resilience fits in," Jens A. "J.A." Rummler, a Pointe Coupee Parish representative on the commission, said in a Friday workshop, "and that seems to be a big part of our discussions, making this where it lasts into the future for other generations of users, whoever they might be, and it's finding what the level is that is the answer to our sustainability question where we have enough resilience."

In earlier presentations from the Water Institute of the Gulf, the commissioners learned historic groundwater pumping had caused the water table to drop across the Baton Rouge area since 1953 — by 150 feet in Baton Rouge and by 85 feet in Denham Springs.

Researchers also suggested that groundwater pumping in the section of the aquifer between the Mississippi and Tangipahoa rivers was causing an annual deficit in supply. The amount of water being pulled from the aquifer annually is about 5.5% more than the aquifer's ability to recharge, the researchers said.

The shutdown of a major production area at the Georgia-Pacific plant in Port Hudson this year likely significantly cuts into that estimated shortfall, which didn't include the plant closure, but doesn't eliminate it, according to published pumping totals.

But after two days of trying to define the aquifer's problems and set long-term objectives, Runge's discussion around the water tank illustration was aimed at pushing the commissioners to refine their objectives and settle on concrete ways to reach those objectives. Researchers will eventually have to gather data on those alternatives and lay out the benefits and trade-offs for the commissioners to weigh.

"You gotta tell them what to evaluate those alternatives against," said Runge, who is research ecologist and decision analyst for USGS.

Some of the commissioners' broad objectives included having a sustainable aquifer with affordable water for all users that isn't polluted, better educating and encouraging the public to conserve, expanding the boundaries of the commission to other parishes using the aquifer and gaining a real-time understanding of what is being withdrawn from the aquifer.

The commission has the power to set priorities for water use and, thereby, control pumping. However, critics of the body, who claim it is too close to industry and point to a recent state audit that blasted its management of the aquifer, say big industrial users should be switched to river water to save groundwater for the households.

Throughout much of the discussion, though, Runge tried to steer the conversation toward more big picture ideas, without slipping into the disputes of the day, to allow, he said, the commissioners to agree on broad goals first before they have make hard decisions.

But hard realities ended up intruding Friday, as retired U.S. Army Lt. Gen. Russel Honore, an outspoken environmentalist who watched the workshop, urged the commissioners to address the need for industry to get off the aquifer and switch to the river. "At some point and time, we got to stare this elephant in the face," he said.

He bristled at the idea that residents could one day be urged to take "two-minute showers," while major industrial users continue to draw large amounts of water from the aquifer.

"I mean the ladies I run into at Albertsons and the retirees at Whole Foods (tell me), 'General, save our aquifer.' 'Well, that's not my job, but I understand what you're saying, folks,'" Honore said. "There's a groundswell of people in this area that's concerned about saving that aquifer. Now we've got to equitably come out of something here with a path to save it, and it's not saving water for industry. Industry has an option."

As Runge pressed them on those questions, divisions were apparent.

Commissioner Matthew Reonas, who works in groundwater education for the state Office of Conservation, said groundwater levels have rebounded somewhat since the 1980s and it could be argued are a stable level.

"But, being that they are so low at this point, that's inducing the salt water encroachment and it isn't sustainable into the future having that cone right where it's at," said Reonas, echoing earlier comments from Commissioner A. Hays Town Jr., an prominent voice in raising concerns about the intrusion.

The "cone" that Reonas referenced is what's known as the "cone of depression," which is how hydrologists describe a sinking water table.

But Reonas' comment drew quick retorts from Commissioners Ronnie Albritton, who represents Georgia Pacific on the body, and Mark Walton, a former Entergy employee. They argued any pumping north of the fault running through Baton Rouge will induce salt water to move across it farther into Baton Rouge.

"So you've got to manage it," Walton said.

Baton Rouge Water Co., the leading user of the aquifer, has a scavenger well to intercept the moving salt, but critics say it is a short-term fix that could bring in more salt over the long term. The commission is also testing in Baton Rouge for a scavenger well site.

The next rounds of workshops are set for Aug. 22 and 23 and Sept. 12 and 13, where the commissioners are expected to settle on alternatives to study.