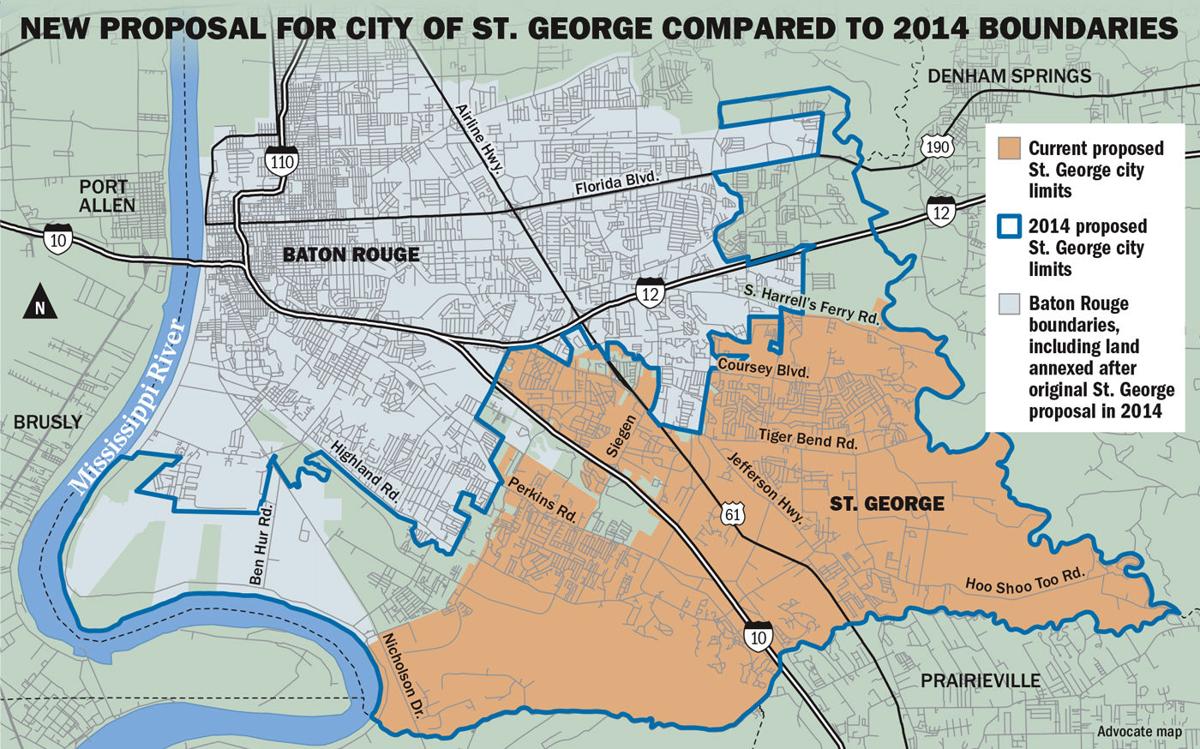 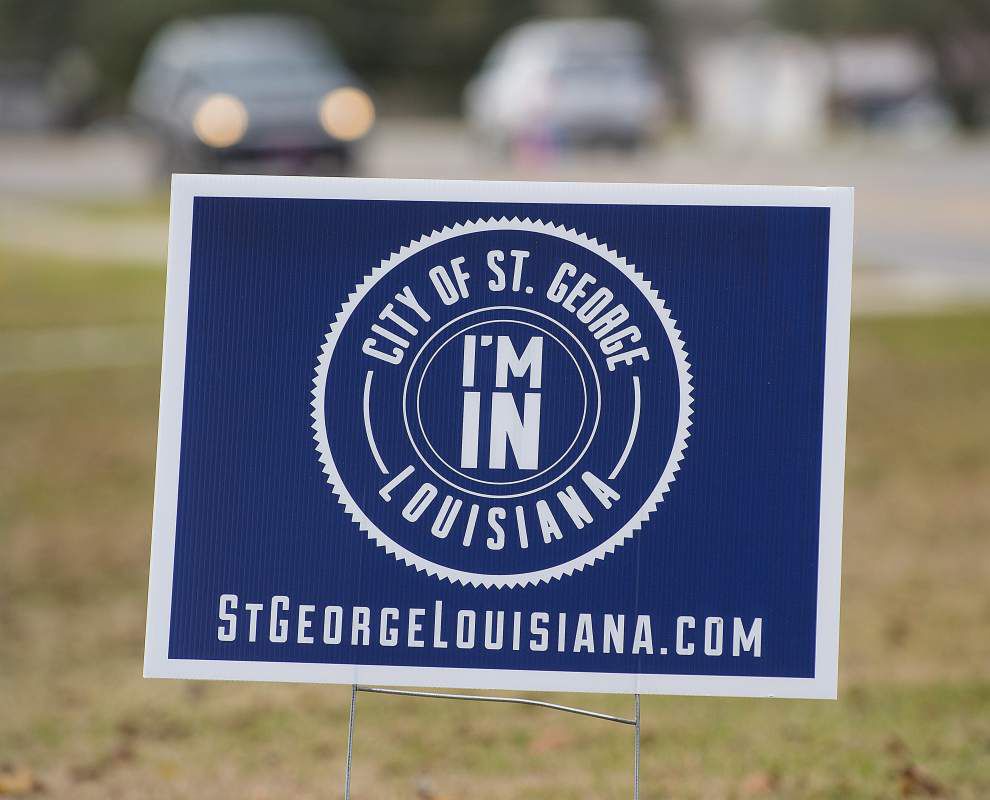 Advocate staff file photo by Travis Spradling -- A report from a CPA firm hired by St. George organizers, released on May 13, 2015, says the proposed new city in the southern part of the parish would not require new taxes to be levied to run the government.

The movement to create a new city in the southeastern part of East Baton Rouge Parish was resurrected Friday after a two year waiting period, bringing back both the passionate support and opposition from its previous attempt but also a new set of rules.

Few issues have been as high-interest in Baton Rouge as the effort to create the city of St. George, which if successful this time would span 60 square miles. The movement began in 2010 with a focus on creating a separate school district for the southeast corner of the parish, and turned into a quest for a new city in 2013.

A previous petition drive to put the question of creating the new city on the ballot fell 71 votes short in 2015, and forced those who backed it to spend two years on the sidelines. St. George organizers announced Friday that they were back with another petition, filing the required paperwork with the Louisiana Secretary of State’s Office.

Advocate staff file photo by Travis Spradling -- A report from a CPA firm hired by St. George organizers, released on May 13, 2015, says the p…

They now have nine months to collect 25 percent of registered voter’s signatures within the St. George boundaries. Last time, when the proposed city was bigger, they were required to get 17,859 signatures. If backers secure the necessary signatures, voters from within the boundaries of the city will decide whether the new municipality moves forward.

St. George, born out of a desire to create a new school district, evolved as supporters said they wanted to address complaints about government inefficiency and crime in Baton Rouge. Opponents said the city would redirect tax dollars away from the East Baton Rouge city-parish government, crippling the East Baton Rouge public school system and reducing dollars for government services including police officers and public works.

Supporters hailed St. George as “the one thing that can save this parish” in a video Friday.

“What the city of St. George offers is simple: historic self-determination, accountability and hope,” their video says.

But opponents who helped to defeat the movement last time had mixed reactions, with some saying they needed more time to digest the return of St. George and others vowing to fight it again.

Both Mayor-President Sharon Weston Broome and her predecessor, Kip Holden, have been vocal opponents of the creation of St. George. Holden’s past administration assembled a team of critics to help squash St. George between 2013 and 2015.

Broome said Friday that her goals to improve the whole of Baton Rouge match the goals that St. George supporters say they want for only their patch of the parish. But Broome hinted that her approach to fighting St. George may also differ from Holden’s, saying she does not like to “be reactionary.”

“Our work will speak toward why everybody needs to be a part of East Baton Rouge Parish and we don’t need any additional breakaways,” Broome said, adding that her focus will be to wow people with the efficiency and quality of government services.

For his part, East Baton Rouge Superintendent Warren Drake said he has worked since he became Superintendent in 2015 “to engage and serve every segment of this community.” The School Board also recently approved a list of construction projects for the next decade that includes $80 million to build two, perhaps three, new schools in south Baton Rouge. Several board members expressed hope that they would help improve opinion of public schools in a fast-growing but school-scare area of the parish, and possibly mollify potential St. George supporters.

The new schools will be built only if voters on April 28 renew a 1-cent sales tax earmarked for education.

The 2018 version of St. George is smaller and includes fewer big tax generators than the St. George that was proposed in 2013.

“I definitely will be a supporter of it and I’ll tell my friends it’s the right thing to do,” said Eddie Rispone, the founder and chairman of ISC Contractors. Rispone said he is not part of the St. George leadership, and declined to characterize his involvement in the previous petition drive.

“It’s the right thing for the parish, it’ll strengthen the parish,” Rispone said.

The original attempt called for a city that was 85 square miles with 107,000 people, which included Gardere and neighborhoods north of South Harrell’s Ferry Road. It also included 11 schools in total.

Mary Olive Pierson, who previously represented the city-parish in its legal fight against St. George last time, said the removal of the Gardere area will reinforce old optics that St. George represents "white flight." The neighborhoods that were cut out largely feed into Cedarcrest-Southmoor, Riveroaks and Wedgewood elementary schools, schools that have a predominantly black student population and, in the case of Riveroaks and Cedarcrest, increasingly more Hispanic students.

“They don’t want African Americans in this city, that’s what it looks like to me,” she said Friday.

St. George organizers and attorneys did not return phone calls and messages Friday. Their website references an accounting report and proposed budget, but the document is not included on the website.

Both sides of the debate last time feuded over the financial impact of St. George. LSU economist Jim Richardson estimated that Baton Rouge would suffer a $53 million budget shortfall from lost sales taxes if St. George incorporated. St. George officials said the loss would be closer to $14 million.

The Baton Rouge Area Chamber and Baton Rouge Area Foundation backed Richardson’s report in 2013, and the two groups hired an accounting firm in 2014 to evaluate the one-page budget St. George organizers released for their city.

BRAC released a statement Friday saying they would analyze the new St. George proposal and maps before bringing it to their board for a discussion. BRAF declined to comment.

State law has changed since the previous incorporation movement, including tweaks that will make it difficult for St. George opponents to use the same tactics as before.

A law passed in 2016 prohibits land from being annexed from a jurisdiction while a petition has been filed to incorporate the area. The Holden administration worked with landowners in 2014 to annex property into the city of Baton Rouge, which shrunk the St. George territory to 80 square miles and about 100,000 people. Baton Rouge annexed Celtic Studios, Costco, Our Lady of the Lake Regional Medical Center, the Mall of Louisiana, L ’Auberge Hotel and Casino, parts of LSU’s research farm land and other parcels of property that would have been part of St. George. Those annexations, St. George leaders said at the time, took at least a 20 percent chunk out of St. George’s projected revenues.

State law also now prevents the registrar of voters – who verifies the signatures on a petition – from removing names more than five days after the names have been submitted to their office.

Better Together, a grass roots offshoot of Together Baton Rouge, fought the incorporation last time by encouraging people who signed the petition to reconsider and to withdraw their name. They peeled 963 signatures off the past petition.

M.E. Cormier, one of the previous leaders of Better Together, said Friday that the methods her group used last time are not the only ways to challenge a petition, and that they will explore more as the St. George petition moves along. Dianne Hanley, another Better Together leader from last time, said she was interested in seeing St. George’s proposed finances this time around, as she continues to have concerns that “ they would destroy one city to build their own.”

“I am 100 percent committed to the city of Baton Rouge and its school system and its integrity and keeping it whole,” Cormier said Friday.

Creating a new city in Louisiana still does not guarantee a new public school district. Successfully opening a public school district with public funding requires amending the Louisiana Constitution. That would require not just a two-thirds vote of both chambers of the Legislature, but also the approval of voters statewide as well as voters in East Baton Rouge Parish.

A number of local leaders said Friday that they expected St. George to return based on murmurs and rumors, but that they hoped to prevent it. Broome said she met with St. George leadership last year. She also said her commitment to fund the Pecue Lane-Interstate 10 interchange, in which City Hall agreed to pony up more than $40 million if no other money became available, is evidence of her caring for the St. George community.

“You know where Pecue Lane is?” Broome said. “It’s out in that area. If I was insensitive or not concerned about every part of this parish, I could have ignored that request.”

Drake has also directed much effort at Woodlawn High School. Under his leadership, the system has expanded a popular robotics program, added career-and-technical training programs through Associated Builders & Contractors and, most recently, created a new magnet program at the high school. Nearby Jefferson Terrace elementary is also set to be rebuilt and expand into a K-8 school on 20-acres of long vacant school property in that area.

Metro Councilwoman Barbara Freiberg, a former School Board president, said it was discouraging to hear that St. George had resurfaced. She said one goal of pushing for more new schools in the southern part of the parish — which the proposed tax could fund — was to appease the concerns of the St. George backers.

“I don’t know if we ever would have been able resolve the differences and do the things they would like to see, but I wish we had pushed harder,” she said. 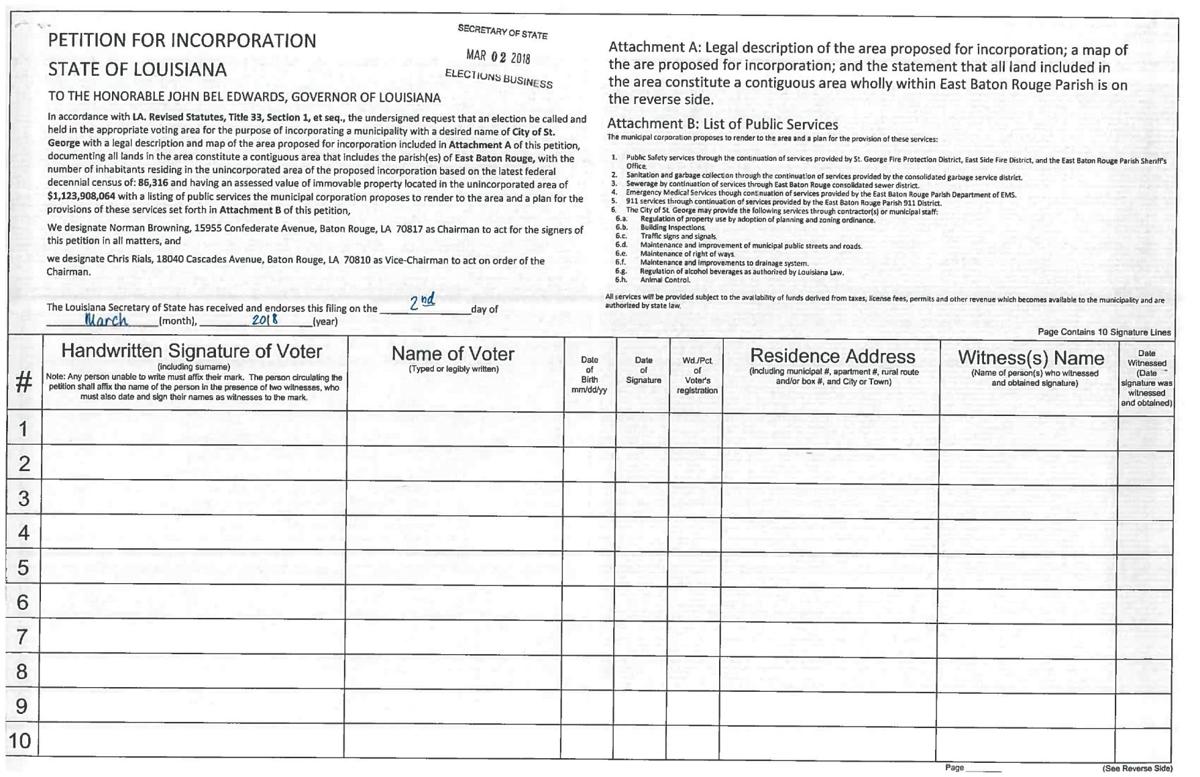 St. George supporters, Mayor Broome to sit down in search of 'tiny fleck of common ground'

Mayor-President Sharon Weston Broome plans to sit down in the near future with supporters of creating a city of St. George to see if there is …