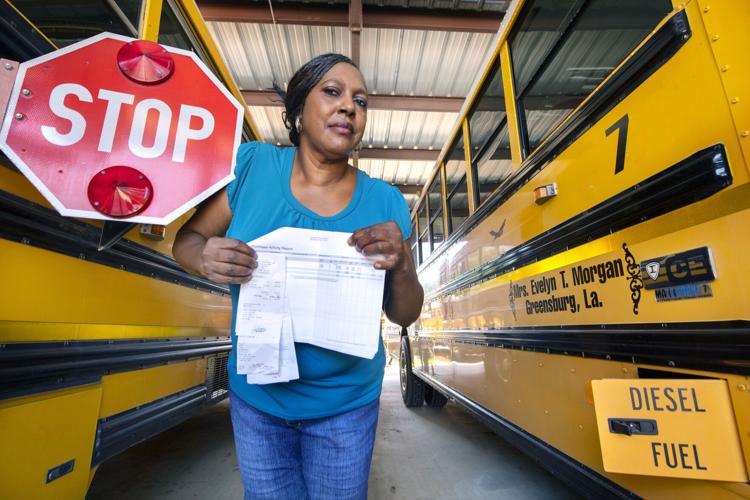 Greensburg's Evelyn Morgan, whose company Morgan Transportation, LLC is feeling hard impacts of rising fuel prices, stands next the fuel-filling door of one of the buses in her fleet, holding several receipts for diesel and printouts of her company's recent charges for fleet fuel, Thursday, June 16, 2022. Fuel prices in the area, which is off the beaten track, are high. 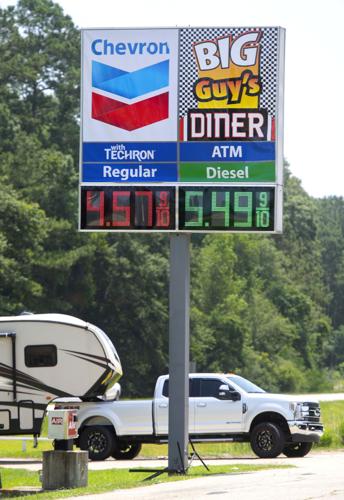 Fuels prices, like these at a station in Greensburg, which is well off Interstate highways, are high, seen Thursday, June 16, 2022.

Greensburg's Evelyn Morgan, whose company Morgan Transportation, LLC is feeling hard impacts of rising fuel prices, stands next the fuel-filling door of one of the buses in her fleet, holding several receipts for diesel and printouts of her company's recent charges for fleet fuel, Thursday, June 16, 2022. Fuel prices in the area, which is off the beaten track, are high.

Fuels prices, like these at a station in Greensburg, which is well off Interstate highways, are high, seen Thursday, June 16, 2022.

Bobby Morgan takes his wife to the doctor twice a month. The trips from their home in Pine Grove to her doctor’s office in Baton Rouge makes for an 80-mile round trip in his Chevrolet Impala, and after only two trips, and at times an outing for groceries, it's time to visit a gas station.

His most-recent fill-up cost him $64.

The average price of gasoline in St. Helena Parish has hovered around $4.45 per gallon, according to AAA, just below the state average of $4.54. But in this impoverished, rural area northeast of Louisiana’s capital, where many of the parish’s 10,000 residents rely on fuel to access basic services in neighboring parishes, gas tanks empty faster than those belonging to city dwellers.

State Rep. Robby Carter, who represents the area, said a recent trip for fuel was an eye-opener.

Adding to the financial pain are costs faced by the parish’s many residents who live in mobile homes or trailers. Often located down pine tree-lined dirt backroads, some of those homes require fuel-powered generators for air conditioning — a necessity in Louisiana’s scorching summer months — and other electric services.

But even for Morgan, who lives in a traditional house off of La. 16, the costs are beginning to pile up.

“We’re concerned,” he said. “We know it’s going to put a bearing on how far we can go with our fixed income and with prices where they are. Things aren’t going to be the same, that’s for sure.”

Morgan has reshaped his budget and schedule around conserving gasoline, scheduling his and his wife’s medical visits for the same day and traveling to buy groceries only once a month. The cost of gasoline has affected his pocketbook enough that, coupled with the ongoing COVID-19 pandemic, he recently decided to cancel a vacation to Colorado.

Her buses run on 65 gallons of diesel fuel and need to be refilled every other day. The current price of diesel in St. Helena means she’s spending about $1,000 on fuel per bus each week. The reimbursement rate in her contract with the parish is based on the much cheaper fuel prices of last year, so the costs mount on her.

Evelyn hopes to renegotiate fuel reimbursement with the school board when renewing her contract so she can make ends meet. As the school year came to a close in May, her monthly fuel bill topped $10,000.

“We’re not going to be able to make it,” Evelyn said. “[Costs are] going to exceed what we’re getting for the route. It’s just not going to be feasible for us, so we really need to get a game plan going before school starts back up.”

Bobby Morgan said he spends $20 on gas just to use his lawn mower equipment.

“Everything is centered around fuel,” Evelyn said.

Energy costs have been on the rise since 2021, though sanctions placed against Russia, a leading oil producer, following its invasion of Ukraine in February have caused the national average price to rise by about two dollars per gallon during the last year.

To make matters worse, investment bank Goldman Sachs predicted this month that these prices may not peak until later this summer. As hurricane season approaches, these costs could become crippling for residents needing to evacuate or power generators to survive.

Carter, D-Greensburg, said he considered asking the Legislature to temporarily pause or lower the gas tax to alleviate the financial burden on residents but said his parish needs the revenue to fix their roads too much. Some parts of the parish haven't had a road overlay in as many as 20 years, and debate over parish infrastructure has caused tension among officials in the past.

“Every time I’m at the pump, everyone around complains about the prices just like I do,” said Carter.

Lara Nicholson writes for The Advocate as a Report for America Corps Member. Email her at lnicholson@theadvocate.com or follow her on Twitter @LaraNicholson_.