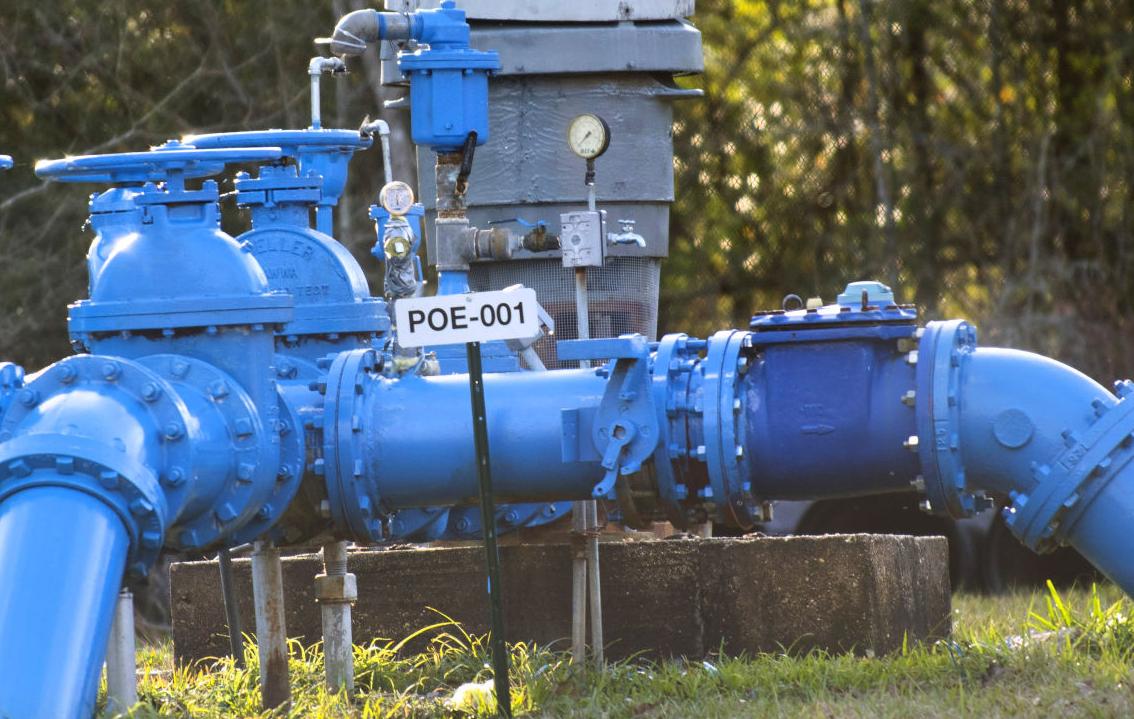 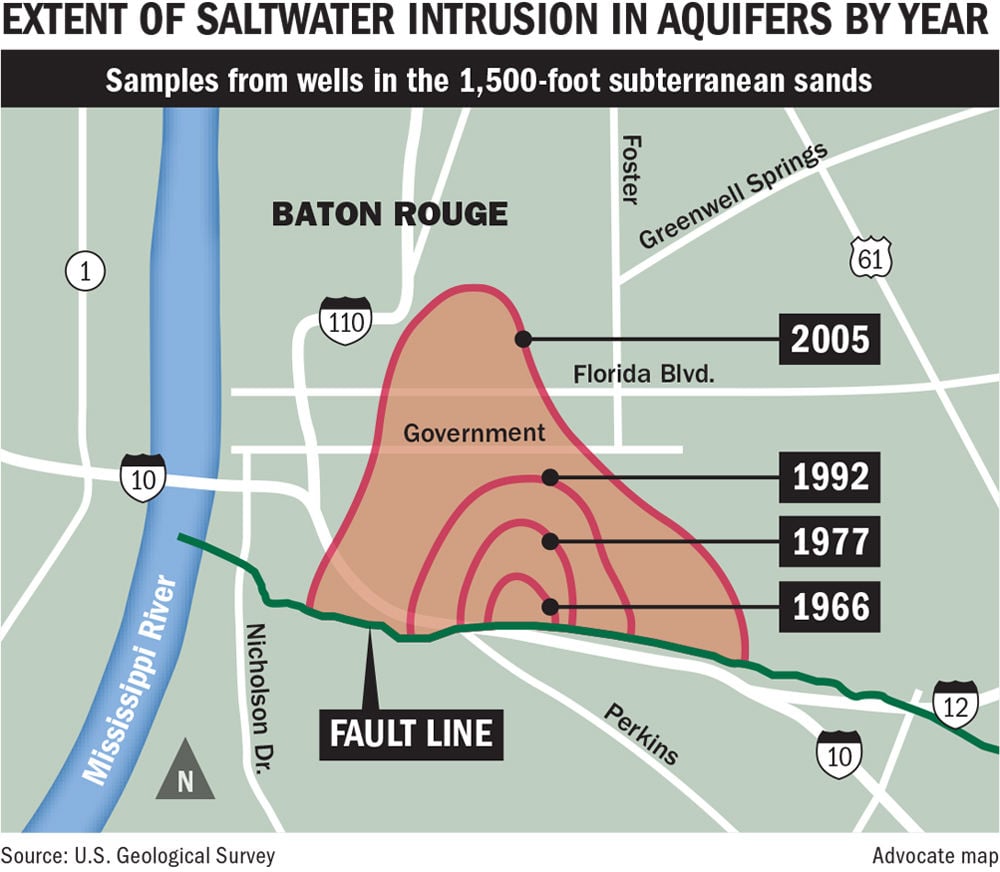 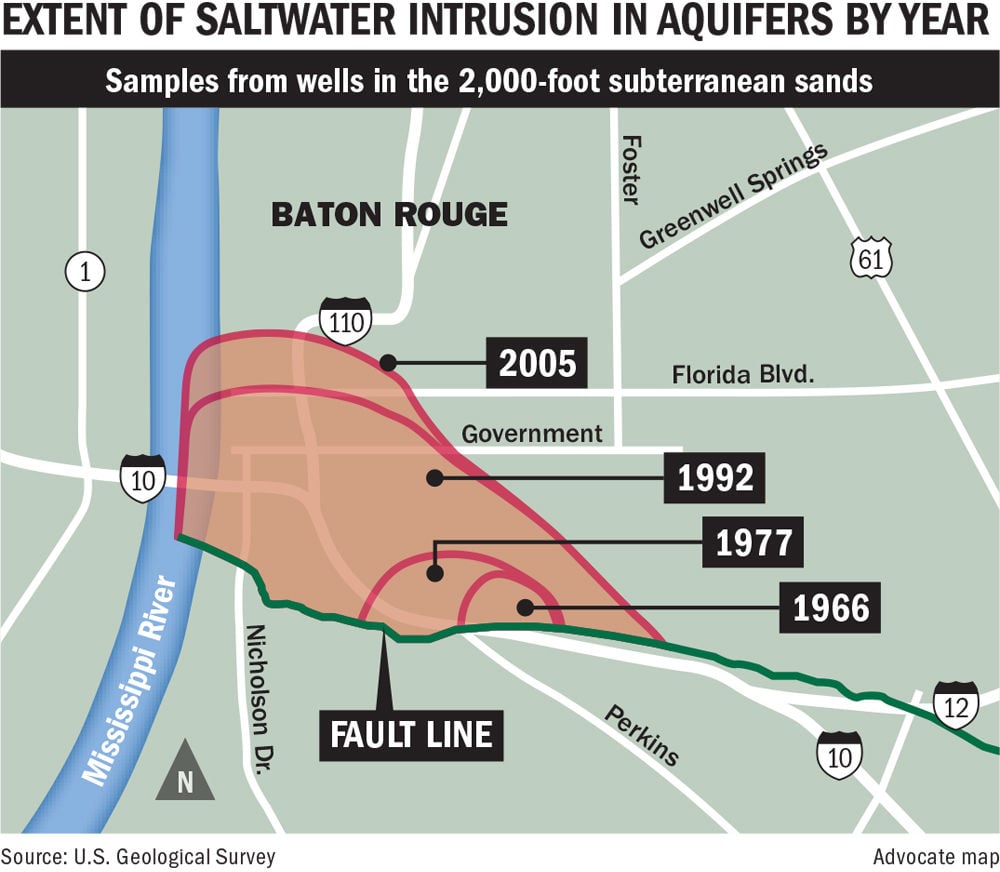 An internal push is afoot to find a new, full-time administrator for a leading regulator of the Baton Rouge region's endangered Southern Hills Aquifer, a drive the current, part-time director says is a campaign to pressure him to resign.

The 44-year-old Capital Area Ground Water Conservation Commission has been under fire from environmentalists, state auditors and some legislators over what they see as a failure to adequately limit pumping and better address growing saltwater intrusion into the water aquifer beneath the Baton Rouge region.

Critics and others say continued intensive pumping from the aquifer is pulling saltwater north across a fault into fresh water zones that supply the region. In 2018, nearly 63 billion gallons of water were drawn from the aquifer.

When it comes to Baton Rouge drinking water, the foxes are guarding the hen house, according to environmental groups that want to shake up the…

Almost 40% of that volume — some 25 billion gallons — was taken by Baton Rouge Water Co., the top user by far. Georgia Pacific was second at 13 billion gallons.

Yet a state performance audit released in May found the ground water commission doesn't know how much water the vast majority of the wells in its database are capable of using and had failed to cut down that use or slow the movement of salt into the aquifer.

In addition to the state audit, the Louisiana Environmental Acton Network has filed an ethics complaint over commissioners who are employed by large industries whose groundwater use they are also supposed to be overseeing.

Commissioner Matthew Reonas, an Office of Conservation employee who is its representative on the ground water commission, is among at least three commissioners who said they are interested in seeing the ground water body get a full-time director and perhaps more staffers so the two-person operation can better handle its responsibility to manage the aquifer across a five-parish region.

"It's pretty clear from the audit that the job's not getting done," Reonas said.

Commissioners Joey Normand, the former mayor of Brusly, and William Daniel, an Ascension Parish government official who represents East Baton Rouge Parish on the commission, agree a full-time director is needed but they aren't necessarily finding fault with the current part-time director, Tony Duplechin. Daniel said he'd like to see Duplechin stay on due to his experience.

But Commission Chairman Nelson Morvant, an industrial representative who is employed by Entergy, said the groundwater body has not yet decided even if it wants a full-time director and it would be up to all 18 members to make that call. Morvant said he has his doubts the votes are there.

Though the internal push for new leadership on the commission hasn't borne fruit, Louisiana Conservation Commissioner Richard Ieyoub, who is Reonas' boss, has already endorsed the pursuit and would like to see the commissioners meet soon on the matter.

"This is an encouraging development and one that my agency fully supports," Ieyoub wrote in a June 20 letter to the commission.

The state Legislature recently directed Ieyoub to take a look at the aquifer. His office is part of the Louisiana Department of Natural Resources and has statewide oversight in managing groundwater drilling and protecting the state's potable water supplies.

Under a resolution sponsored by state Rep. C. Denise Marcelle, D-Baton Rouge, Ieyoub has been asked to determine if he needs to declare that Baton Rouge has a critical area of groundwater concern, and, if so, make recommendations by February 2020 to the ground water commission about how to address it.

But Ieyoub wrote his letter endorsing the search for a full-time director to the commission apparently under the mistaken impression that Duplechin, the part-time director for the past eight years, had already agreed to step down a day earlier.

Duplechin, a geologist and retired state Conservation employee who once led that office's groundwater section, has since rejected that idea as a misinterpretation of his words during a commission meeting June 19. He said wants to stay on in some capacity to continue the improvements he has seen through.

"I think we've done a lot in the past eight years," he said.

The topic of his departure was brought to the fore in that meeting by Reonas during a discussion of the annual budget. Reonas argued the group to put aside $8,000 for a search committee.

According to an audio recording of the meeting and later interviews with some members, Reonas' request caught some members off guard and failed to garner a second as an improper and premature way to address the question of finding a full-time director.

Later in the same meeting, however, with prepared remarks for the final point in his director's address to the commission, Duplechin did appear to speak as if his days as the commission's administrator could be coming to a close.

"Finally, I've been giving a lot of thought to my work as the executive director and while I feel we've made great strides in the eight years that I've served, I think the district does indeed need the services of a full-time director," he said, according to the audio recording, acknowledging he's "stretched kind of thin."

In the statement, he explained how his retirement status with the state barred him from working full time but said he would want to say on as long as it took to find a new director and would like remain as the new leader's adviser.

"I've enjoyed serving you and am proud of what we've accomplished," Duplechin said.

In subsequent interviews, Duplechin said he was only trying to explain what the search for a full-time director would mean for him and that he doesn't want to resign.

Morvant, the commission chairman, said he wants to sit down with Ieyoub and try to open the lines of communication between the state office and the ground water commission.

Morvant, who said he doubts whether the June 20 letter to the ground water commission was actually sent by Ieyoub, sent him a response letter personally, to his home, a week ago but has not heard back yet.

Patrick Courreges, spokesman for the state office, said Ieyoub reads every letter with his signature on it before it is sent but has told staff that he hasn't seen Morvant's response letter. Still, Courreges said, the conservation commissioner has an open-door policy.

"That's how the commissioner runs his show. If anyone wants to meet with him on anything under his jurisdiction, he'll meet with them," Courreges said.

After a critical state audit, an ethics complaint and charges from environmentalists that the "foxes are guarding the hen house," the Capital …