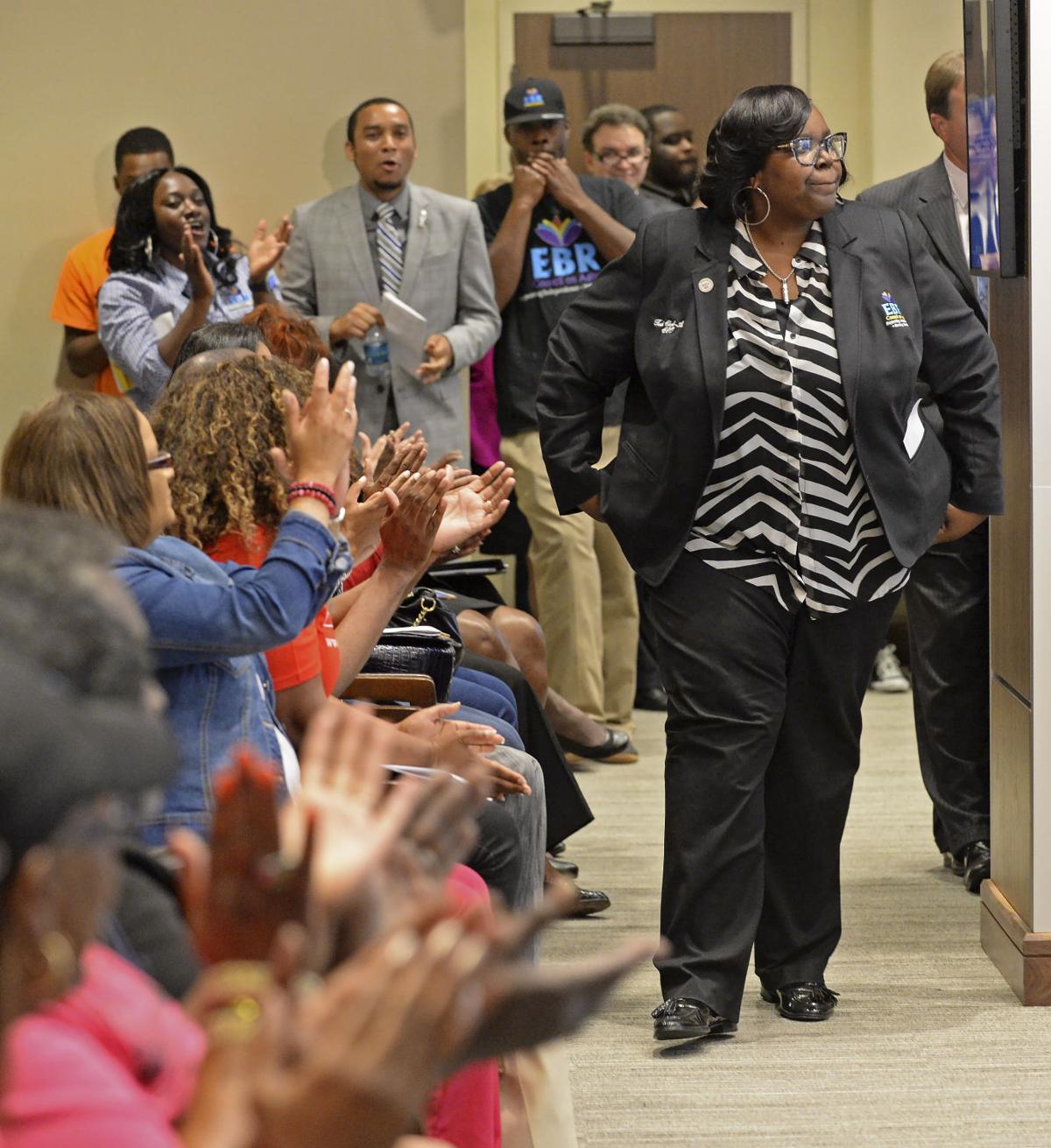 Supporters backing the Council on Aging applaud as embattled director Tasha Clark Amar takes to the podium during a meeting of the metro council where a proposed Council on Aging tax was discussed, Wednesday, April 12, 2017, at City Hall in downtown Baton Rouge, La. Democratic members of the council walked out on the meeting after a vote failed that would have immediately approved the tax without knowing the findings of a legislative audit of the Council on Aging. 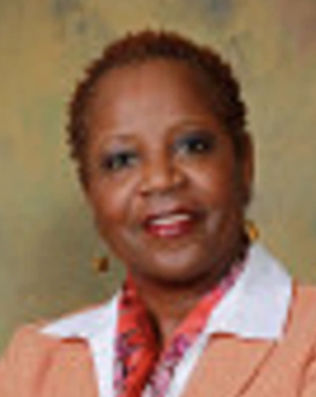 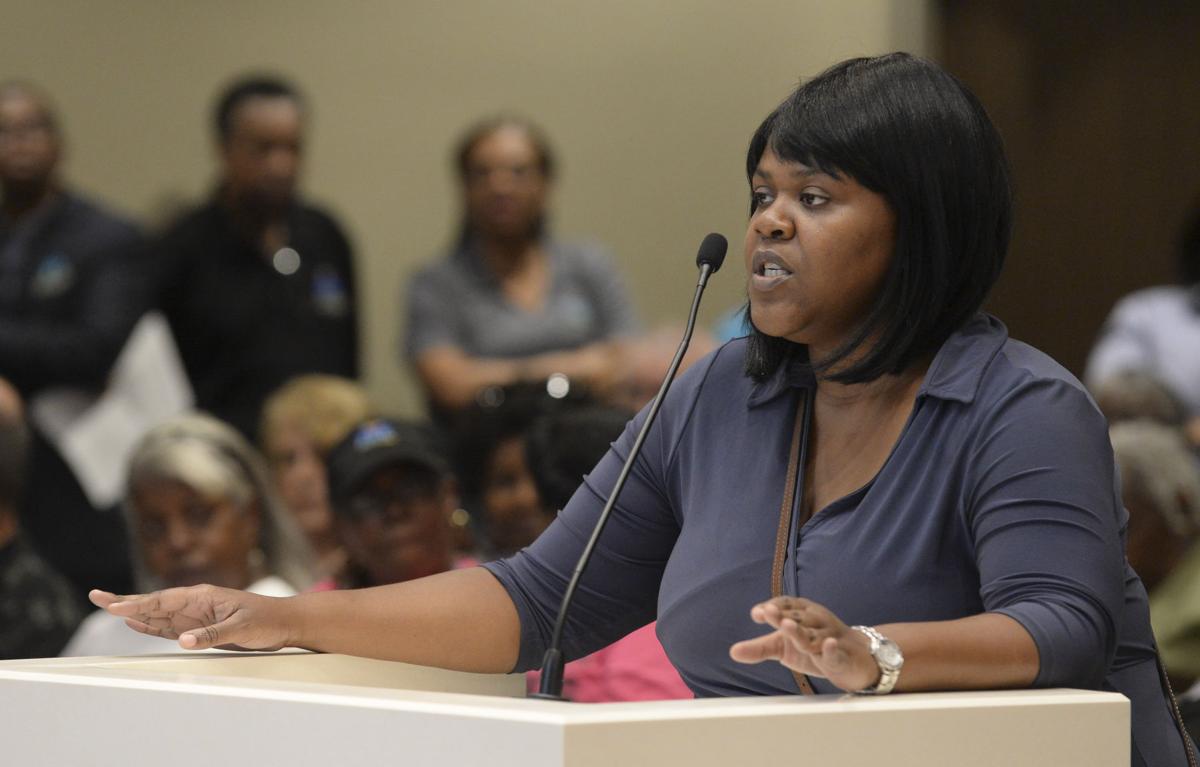 Tracie Davis, the granddaughter of the late Helen Plummer, discusses her concerns regarding money management before the metro council regarding a proposed tax benefitting the Council on Aging, Wednesday, April 12, 2017, at City Hall in downtown Baton Rouge, La. Democratic members of the council walked out on the meeting after a vote failed that would have immediately approved the tax without knowing the findings of a legislative audit of the Council on Aging.

Supporters backing the Council on Aging applaud as embattled director Tasha Clark Amar takes to the podium during a meeting of the metro council where a proposed Council on Aging tax was discussed, Wednesday, April 12, 2017, at City Hall in downtown Baton Rouge, La. Democratic members of the council walked out on the meeting after a vote failed that would have immediately approved the tax without knowing the findings of a legislative audit of the Council on Aging.

Tracie Davis, the granddaughter of the late Helen Plummer, discusses her concerns regarding money management before the metro council regarding a proposed tax benefitting the Council on Aging, Wednesday, April 12, 2017, at City Hall in downtown Baton Rouge, La. Democratic members of the council walked out on the meeting after a vote failed that would have immediately approved the tax without knowing the findings of a legislative audit of the Council on Aging.

The state Inspector General's office has issued at least five subpoenas in an investigation into the East Baton Rouge Council on Aging's executive director and a board member related to their possible influence over a will belonging to a now-deceased council client.

The family of one-time Council on Aging client Helen Plummer has accused Tasha Clark-Amar, the agency's director, of influencing the writing of a will at the end of Plummer's life.

The issue earned pointed criticism from several Metro Council members, prompting the council's board to rewrite parts of the by-laws governing conflicts of interest. The controversy also sparked an internal investigation at Southern University Law Center, as professor Dorothy Jackson, who ran the school's elder law clinic, was involved in the writing of the will. At that time, Jackson also served on the Council on Aging's board.

Subpoenas filed at the the 19th Judicial District Court's clerk's office show that the state inspector general's office began gathering documents through the court in June.

OIG investigations are usually secret, and Inspector General Stephen Street said Tuesday that he could not comment on any probe. But the subpoenas show that the OIG was requesting new evidence as recently as a month ago.

Each of the five subpoenas includes a paragraph explaining that OIG is investigating "an allegation that undue influence" was exerted by Clark-Amar and "a member of the board of directors of the EBRCOA" upon Helen Plummer.

Plummer died at age 95 in March. She left behind a will that Jackson drafted and that named Clark-Amar as trustee and executrix of Plummer's estate, which allowed Clark-Amar to pay herself $500 a month from the estate over 20 years.

After Plummer's family members publicly complained about the will, Clark-Amar and Jackson both removed themselves, while also denying any wrongdoing. Clark-Amar subsequently filed a defamation lawsuit against the family.

The inspector general's office subpoenaed Clark-Amar's phone records at the end of Sept. for outgoing and incoming phone calls and text messages starting in 2014 through present day. The subpoena for the phone records says Clark-Amar told investigators that she and Plummer had a close personal relationship.

The phone records may help investigators "determine the true relationships" among Clark-Amar, Jackson and Plummer, the subpoena says.

Clark-Amar referred all comments Tuesday to her attorney, Charlotte McGehee. McGehee said that she could not comment on anything related to the OIG investigation, given the confidential nature of the probes.

"Eventually, there's going to be some finding from the OIG but that's beyond the purview of me," McGehee said.

The inspector general also subpoenaed the Southern University Law Center's reports about Jackson, who was placed on administrative leave amid the controversy. The OIG filed the subpoena Aug. 15 for Southern's investigation into Jackson's role in Plummer's will.

The Advocate and WBRZ also filed a lawsuit that same month for access to the report, and State Judge Timothy Kelley ruled Aug. 21 that the report be released to the public.

Bill Aaron, an attorney for Jackson, said Tuesday that he had not heard that the inspector general was investigating. He added, though, that he had seen bank records of Plummer's that were incriminating about her family members. Aaron said bank records show that Plummer's granddaughter, Tracie Davis, added her name to her grandmother's bank account shortly before her death and withdrew money. He described it as "awfully suspicious."

Davis responded that she was added to the bank account at her grandmother's request, and that she used the money to pay for Plummer's funeral, hospital bills and other end-of-life expenses. Davis said she kept all of the receipts and that she also had a statement created showing how every withdrawal from the account was spent. She said she made all of the documents available to Jackson before the lawyer withdrew from the estate.

Aaron said Jackson is still on administrative leave from Southern and that the university has put together a board of faculty members who are expected to hold a hearing about the case. After the hearing, the board of faculty is expected to make a recommendation to the chancellor about any penalties Jackson could face, Aaron said. He has asserted that his client's work on the will was proper and that she would end up vindicated.

Southern Law Center administrators did not immediately respond Tuesday to requests for comment.

The OIG also issued subpoenas in June for three employees at the LES Federal Credit Union to be deposed under oath. Those subpoenas point out that Plummer's daughter, Jacquelyn Antoine, was removed as a joint account holder on Plummer's accounts in the summer of 2016 without Antoine's knowledge or consent.

Who raked in OT cash during floods? Council on Aging generous in paying high-level officials

The subpoenas say that the bank employees — who advised that they knew Plummer and personally assisted her at the credit union — needed to be deposed to explain Plummer's "banking needs and transactions and discussions concerning her accounts with LES Federal Credit Union."

Davis and Dan Freeman, Plummer's grandchildren, both said Tuesday that they voluntarily met in the spring with OIG investigators and turned over all of the bank records they had available.

"I'm hopeful that justice is served in the end and that they're held accountable," Freeman said.

"Accountable in the same way as everyday citizens," Davis added.

The friction over Plummer's will has spawned multiple legal disputes still playing out in court. Plummer's family appeared Tuesday morning before state Judge Don Johnson as they continue to try to settle the succession of Plummer's estate.

The attorneys for the family told the judge that the roadblock stopping Plummer's estate from being settled is a petition for tutorship filed seven months ago with Johnson's colleague, state Judge Janice Clark. Clark is the mother of Clark-Amar, the Council on Aging executive director.

Plummer left a portion of her estate to her great-granddaughter, who is still a minor. Davis, the girl's mother, has petitioned the court for tutorship of that portion of the estate until her daughter becomes an adult. The succession cannot be closed until Clark signs the petition, which was filed March 27.

Johnson is presiding over both the succession case and the defamation lawsuit that Clark-Amar filed against the family. On Tuesday, he suggested that there seemed to be questions swirling about his ability to be fair in the case. He was the only 19th JDC judge who did not recuse himself from the defamation case.

The judge said there should be no doubt he will be fair.

"If you are ever doubtful about the ability of the court to hold a fair session or a timely session, please alert the court," Johnson said. "No matter who is before the court, all people will be treated in a fair matter and in a timely matter."

Johnson then called the attorneys up to his bench and requested that they file a complaint with the judicial administrator about Clark's inaction on the tutorship. He said he would file the complaint himself if the attorneys did not.

"This has to end," Johnson said, pounding a first against his bench. Clark's office did not respond to a request for comment.

Eight months after she was first assigned the case, state District Court Judge Janice Clark has recused herself from a legal matter related to…