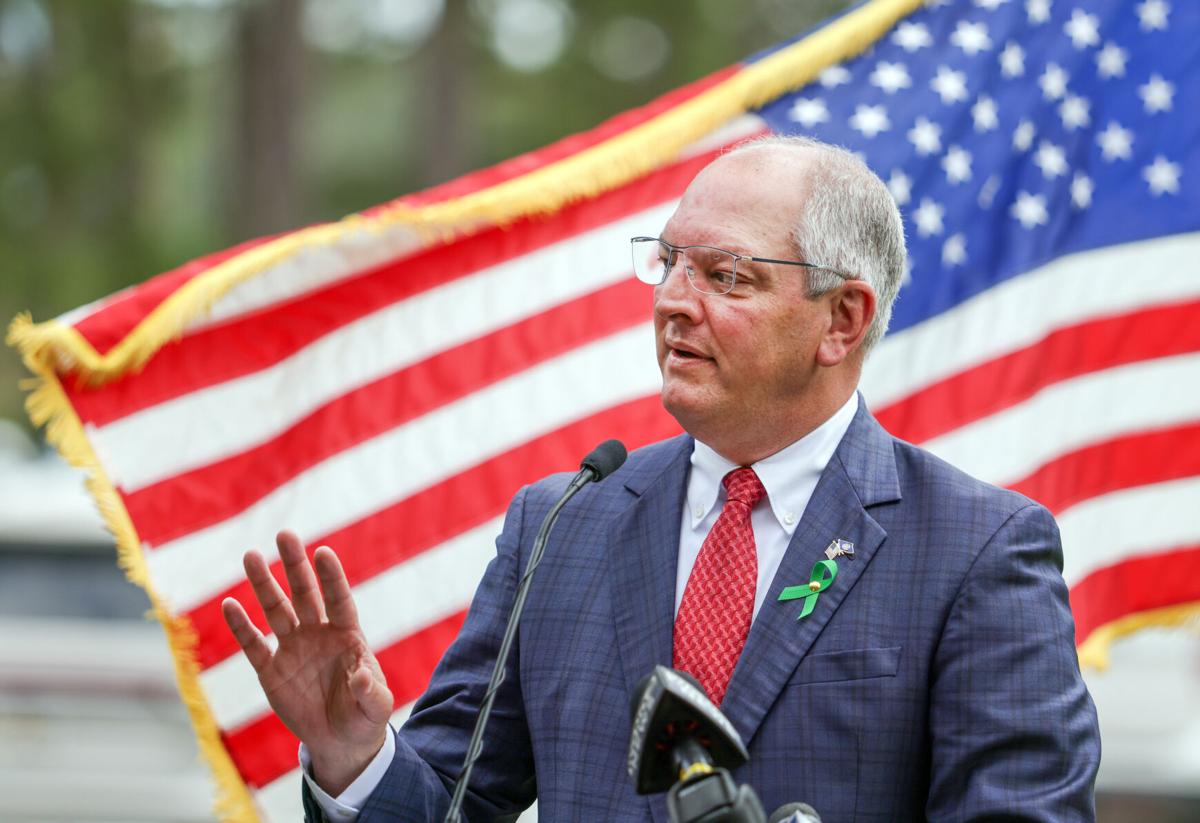 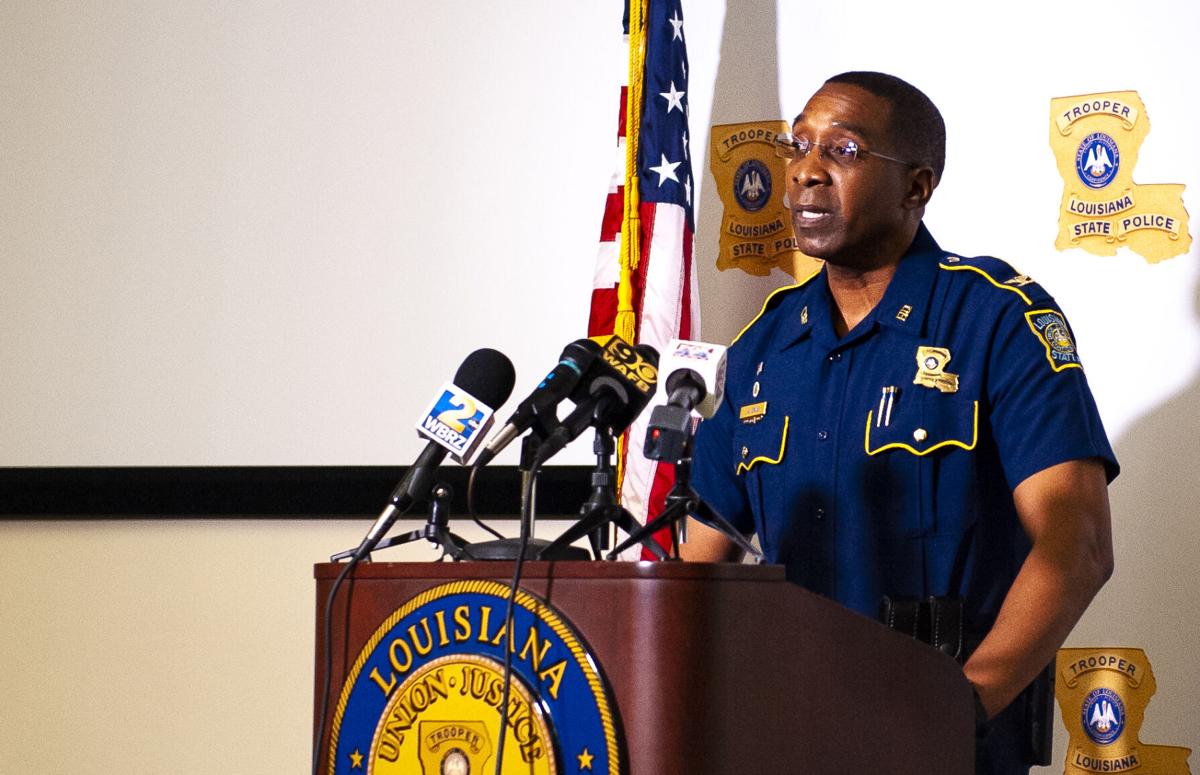 Louisiana State Police Col. Lamar Davis speaks about the death of Ronald Greene at a press conference. Greene died after traffic stop while being detained by Louisiana State Troopers in Northeast Louisiana near Monroe in 2019. ORG XMIT: BAT2105211845163181 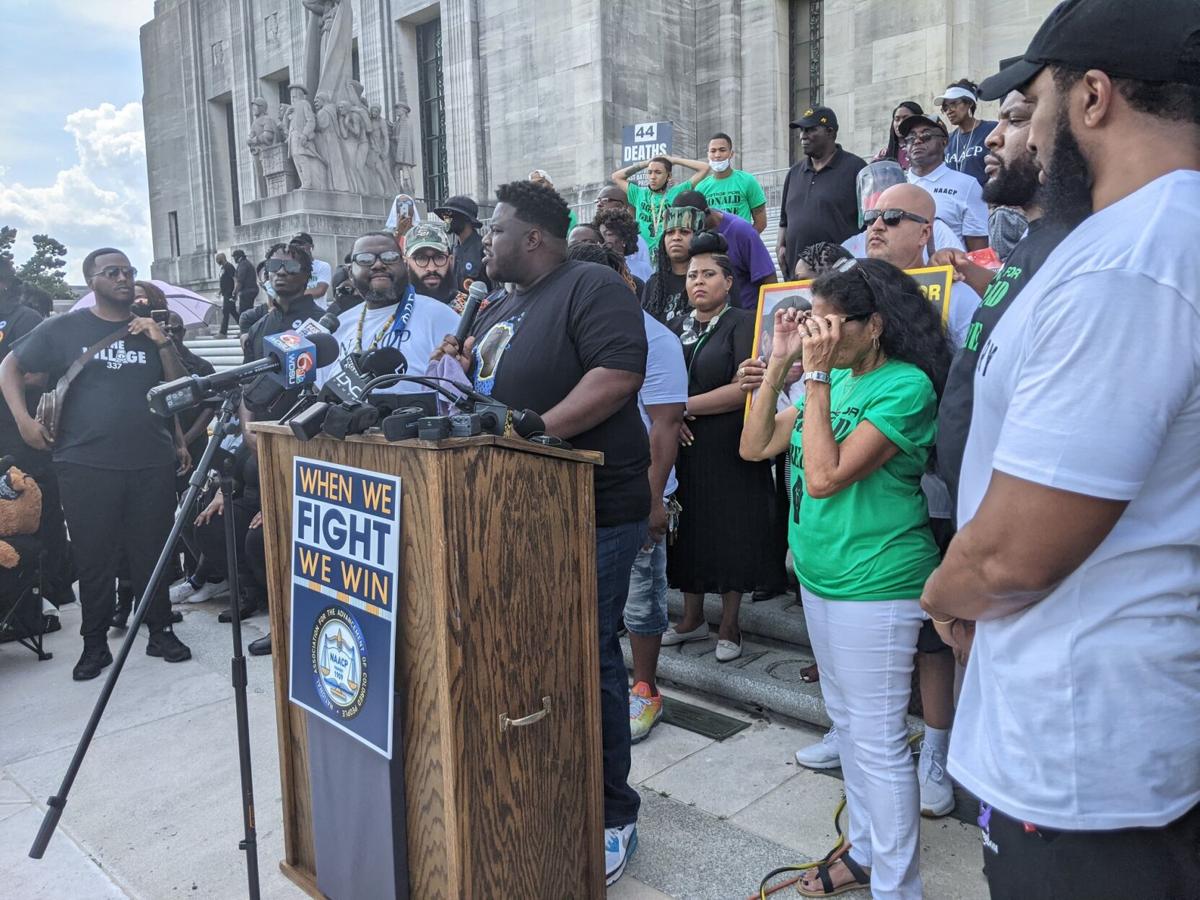 The family of Ronald Greene and Gary Chambers joined the May 21, 2021, rally for justice, where they criticized the way Gov.  John Bel Edwards handled the situation and called the troopers involved in the death "criminals with badges."
1 of 3

Louisiana State Police Col. Lamar Davis speaks about the death of Ronald Greene at a press conference. Greene died after traffic stop while being detained by Louisiana State Troopers in Northeast Louisiana near Monroe in 2019. ORG XMIT: BAT2105211845163181

The family of Ronald Greene and Gary Chambers joined the May 21, 2021, rally for justice, where they criticized the way Gov.  John Bel Edwards handled the situation and called the troopers involved in the death "criminals with badges."

As the focus of Ronald Greene’s death in a brutal 2019 encounter with Louisiana State Police turns from wrenching video images of his arrest in Union Parish to suspicions of a coverup in Baton Rouge, advocates for prosecuting the troopers who were involved have begun pointing fingers at Gov. John Bel Edwards.

The Democratic governor has said little about what he knew about the horrific incident — and when he realized its seriousness. Nor has he addressed claims from the Greene family that authorities first told them he died from a car crash.

Edwards also declined to address questions this week on what Louisiana State Police now describe as a failure to give state prosecutors graphic footage from the body-worn camera of a supervising trooper at the scene, Lt. John Clary. The Associated Press released that leaked video last week.

A State Police spokesman acknowledged the agency only recently provided Clary’s video to state prosecutors, but claimed the footage was previously given to federal investigators and that it figured into the discipline handed last year to Master Trooper Kory York for dragging Greene by his leg shackles.

Greene, a 49-year-old Black man, led troopers on a chase before crashing his car on a dark Union Parish road. Bodycam footage shows troopers pulling him out of the vehicle.

“I’m sorry, I’m scared! I’m just scared,” he howled as the officers began tasing him repeatedly and beat him bloody. Greene died after being pummeled, dragged and forced to stay prone on his belly. All of the troopers seen in the bodycam videos of the encounter are White.

The recent publication of the videos from Clary’s camera and those of other troopers who reached the scene early on May 10, 2019 has drawn a national spotlight on Louisiana’s premier policing agency.

NEW ORLEANS (AP) — In perhaps the strongest evidence yet of an attempted cover-up in the deadly 2019 arrest of Ronald Greene, the ranking Loui…

Edwards first saw the videos more than seven months ago. He has focused his public statements on his dismay at the conduct of the troopers seen in them, which he described Thursday as “deeply unprofessional and incredibly disturbing.”

Edwards, who grew up in a law enforcement family, the son of a Tangipahoa Parish sheriff, said in a statement that he was “disappointed in them and in any officer who stood by and did not intervene during the arrest.”

But on questions surrounding the agency’s handling of the incident, the governor has been silent. Edwards’ office declined to comment on whether he thinks evidence was withheld in the case and what if anything he did about it.

An autopsy report on Greene’s death, which found substantial cocaine and alcohol in his system, did not conclude whether it was a homicide, accident or something else. It said authorities failed to provide the coroner a written incident report, emergency services records or details on the vehicle collision.

The governor has been privy to the horrific contents of the videos since last October, when he viewed them in advance of his first meeting with Greene’s family members, after which the family viewed footage.

But after the AP published much of the footage last week, State Police released what officials described as the full catalogue of nine videos from the body-worn and dash cameras of troopers involved in Greene’s fatal arrest. Edwards said he supported the decision to release them.

Capt. Nick Manale, an agency spokesman, said Friday that all of the State Police videos were made available to the family last October. Greene’s relatives argue that they show the public incontrovertible evidence of a crime by the troopers, and that the officers should face immediate arrest and swift prosecution.

Mona Hardin, Greene’s mother, and the family’s attorneys met Thursday at the Capitol first with 3rd Judicial District Attorney John Belton, and then Edwards, pressing each for the arrest and prosecution of troopers. The meetings preceded a staged protest of about 200 people that evening in Baton Rouge.

Hardin said she had high hopes for her second meeting with the governor. She told reporters beforehand that she wanted Edwards to “show he had a heart," and to persuade him that he was among a select few who could bring her family justice.

But the meeting ended in disappointment, said family attorney Ron Haley. "It was just more of the same," he said afterward. "There was no firm commitment to anything."

It’s not for Edwards to arrest or prosecute, Haley acknowledged. But he argued that the governor should address why the ghastly details remained hidden for so long.

"You're telling me the governor didn't know State Police killed a Black man for no reason? When were you first made aware of this, and when did you make it your business to get to the bottom of this?" he asked. "It doesn't take long to figure out that what happened on those videos was criminal."

Two weeks after his first meeting with the family last October, Edwards accepted the resignation of Col. Kevin Reeves as superintendent of State Police.

Before Edwards appointed him in 2017 to replace Col. Mike Edmonson, Reeves rose through the ranks of Troop F, the northeast Louisiana unit at the heart of the scandal over Greene’s death and other recent allegations of excessive force, to become its commander.

On the same October day Reeves announced his resignation, he signed off on a 50-hour suspension for  York, who was seen dragging Greene across the ground in Clary’s bodycam video.

Col. Lamar Davis, who succeeded Reeves as superintendent, said last week he intends to fire Dakota DeMoss, one of the troopers involved in the encounter that ended with Greene's death.

Trooper Christopher Hollingsworth, who was captured on a recording saying he had “beat the ever-living f---” out of Greene, died in a single-car crash last year after learning he would be fired for his role in the incident

The AP reported that Clary told State Police investigators hours after Greene’s death that he had no body camera footage of Greene’s arrest. Haley said a report he viewed last year noted the footage but said that it lacked evidentiary value.

State Police say they are still reviewing why that video was omitted from the criminal file that investigators forwarded to Belton, the DA, who has said he first became aware of Clary’s bodycam video only recently.

Cliff Strider, a semi-retired prosecutor who worked in Belton’s office when the case got there, said in an interview he was the first to review the file on Greene’s arrest and death.

“I can assure you that some of the stuff I’ve read (about) in the paper the last couple weeks was not in there,” Strider said of the file he reviewed, though he declined to offer specifics of what was missing.

Strider said he met with Belton and State Police officials to discuss what to do with the case.

Belton, who did not return messages this week, has said he quickly requested a Justice Department review for the potentially thorny in-custody death case.

Moore said he recommended referring the case to federal investigators, expressing concern over the fact that State Police are the dominant law enforcement presence in Belton’s district.

“When you have a smaller town like that and State Police that are really the bigger agency in that parish are the ones alleged to have committed the violation, who do you turn to to do an investigation?” Moore asked.

“That’s when we discussed the FBI, the Department of Justice. That was the most appropriate decision to make.”

Belton, a longtime Union Parish prosecutor who was elected as the district’s first Black DA in 2014, thus far has declined to pursue state criminal charges against any of the troopers over Greene’s death.

Belton, though, has not ceded his authority to prosecute the troopers in state court.

Two Louisiana State Police troopers were fired last week, months after both were arrested and accused of using excessive force against Black s…