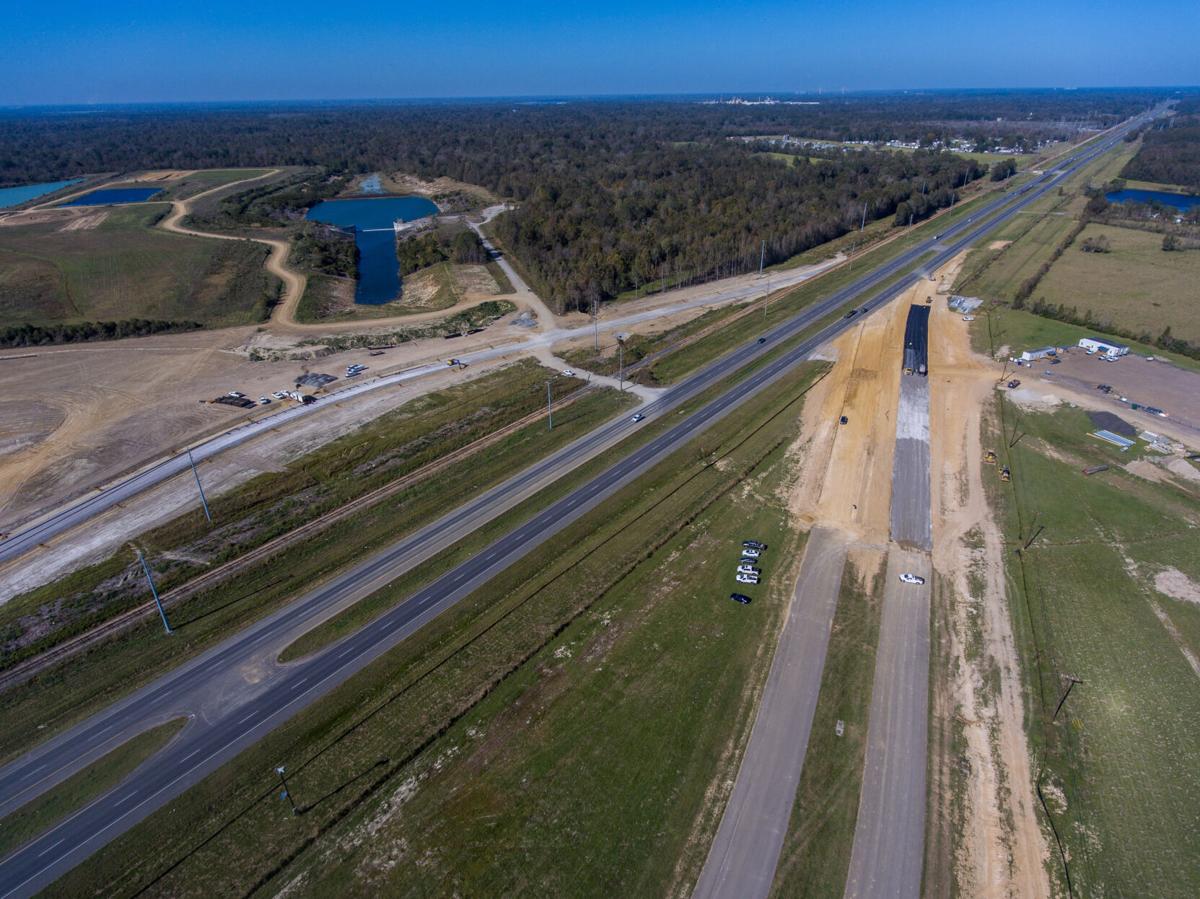 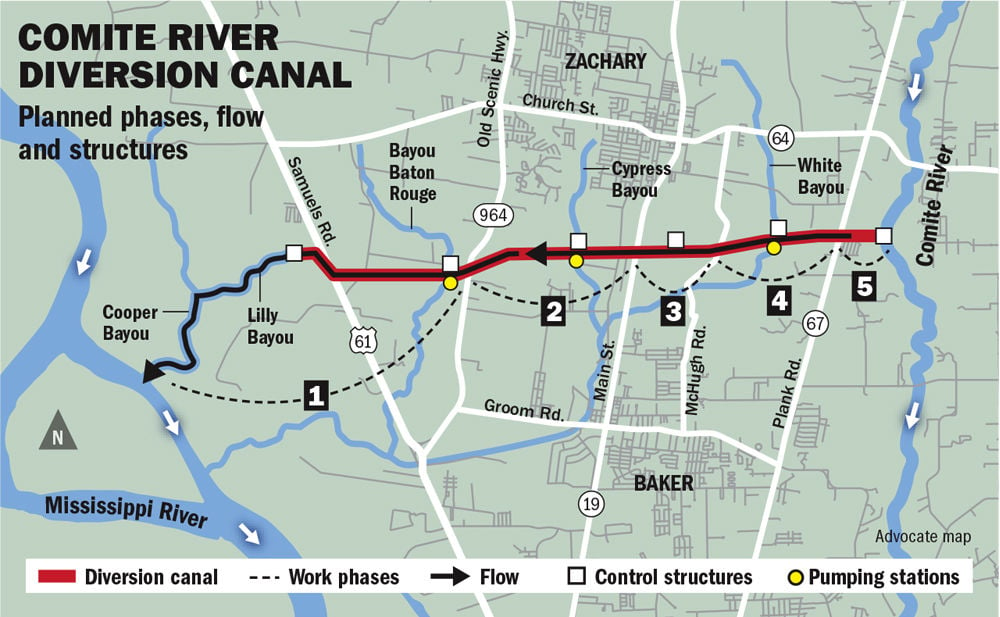 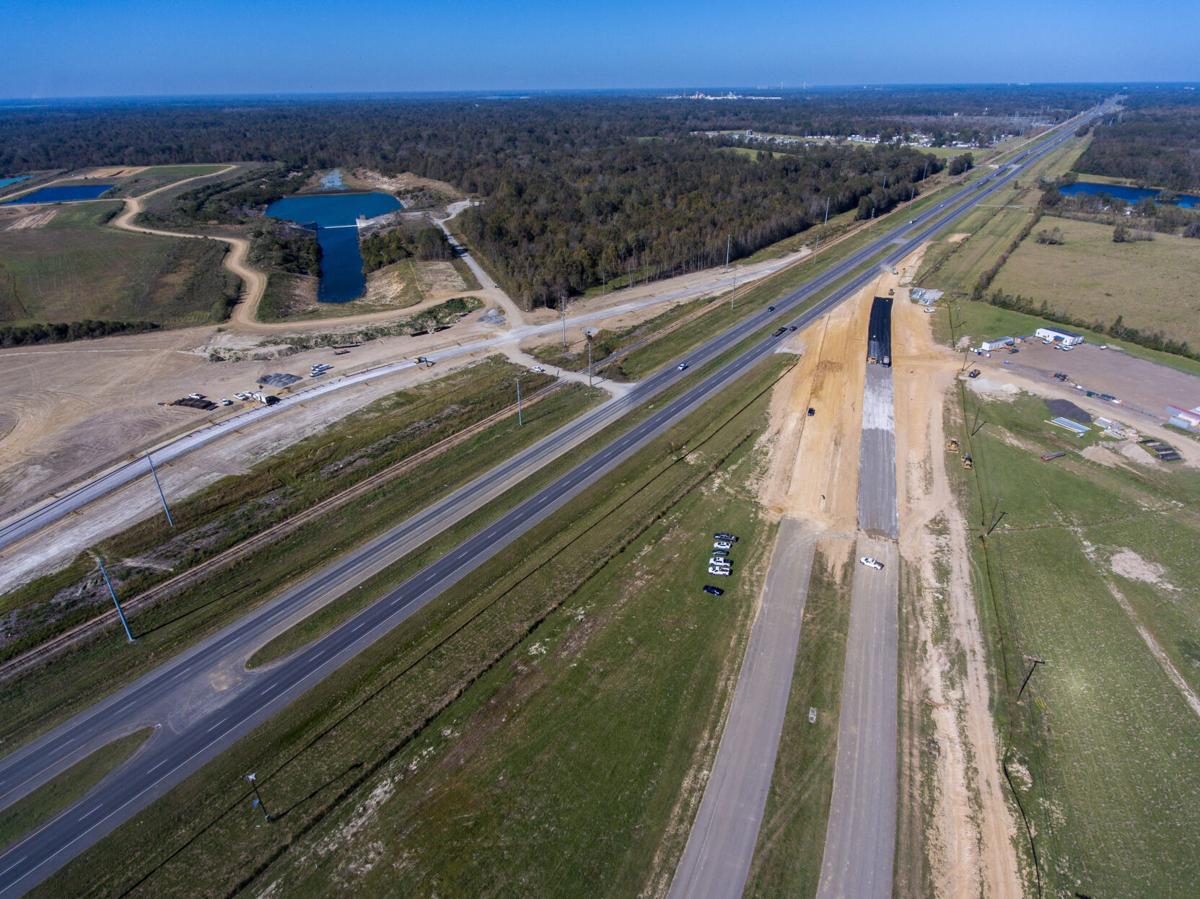 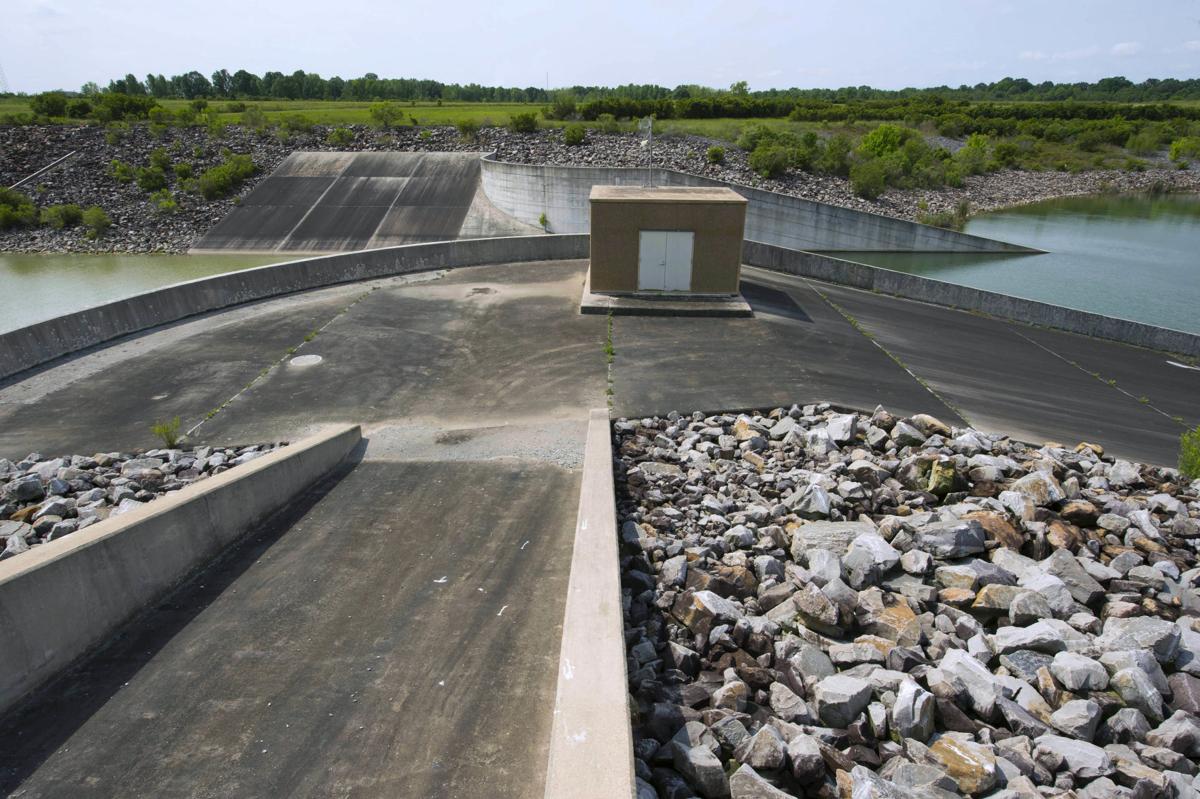 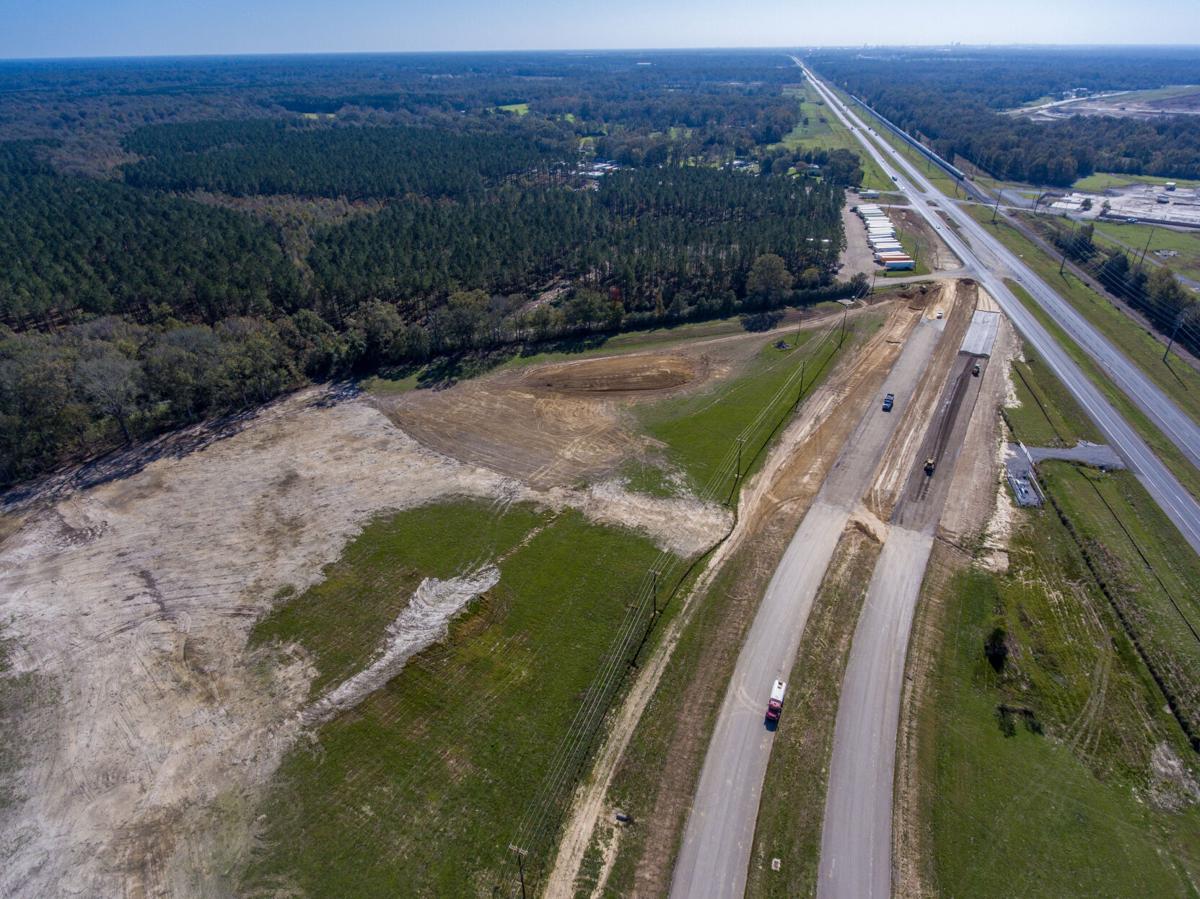 The construction on the Comite diversion continues on U.S. 61. The highway will have to be rerouted , so the canal can be put in and then an elevated portion of U.S. 61 will be installed over the canal.

The construction on the Comite diversion continues on U.S. 61. The highway will have to be rerouted , so the canal can be put in and then an elevated portion of U.S. 61 will be installed over the canal.

The U.S. Army Corps of Engineers expects to award a contract to dig out and build a 1.5-mile segment of the long-awaited Comite River Diversion Canal as early as the end of November, agency officials said.

The contract is one of three construction jobs, worth an estimated $80 million combined, to be awarded through mid-December for the East Baton Rouge Parish flood protection canal.

That means, including construction work already started in the U.S. 61 area, four different construction jobs for the channel could be underway by year's end, agency officials said.

Like a swiping cut across the landscape, the 12-mile long diversion canal will draw water from the Comite River and shunt it to the Mississippi River, lessening flood levels on the lower Amite River and related bayous, various analyses have shown.

For a link to Corps of Engineers drone footage of cleared section of future canal, click here.

The new canal segment between La. 67 and McHugh Road will be the first piece dedicated solely to digging a part of the drainage channel and is another measurable step toward bringing to reality an idea that had been discussed for generations as a way to lessen the area's flooding woes.

Once built, the rock-lined canal section will be 50 feet deep and between 280- and 370-feet wide, Corps officials said. For comparison, a football field, including its end zones, is 360 feet long.

Corps officials also recently told a legislative task force on the diversion that more land is needed following more refined design. They and state highway officials are still trying to figure out what that will mean for the overall project's completion target of the end of 2021.

"So what you're saying is this will impact the completion date," state Rep. Valarie Hodges, R-Denham Springs, asked a lead Corps official earlier this month in a task force meeting.

The U.S. Army Corps of Engineers wants to take 3½ additional years and spend an extra $6 million to study the proposed Darlington Dry Dam and …

"This will impact the completion," Bobby Duplantier, the Corps senior project manager, responded.

"By how much," Hodges asked.

"That's what they're meeting to try to determine," Duplantier said.

Earlier, less detailed design had previously called for 52 parcels of land but the finalized plans call for an additional 31 pieces, Corps and state highway officials said.

Fifty of those now 83 total parcels have already been purchased, some of that work done in the years previous through the Amite River Basin Commission. Of the remainder, one parcel is in closing, others are in negotiations and a remaining 12 are being appraised, a state highway official said.

"Even though that number (of parcels needed) almost doubled, we've been plugging and chugging, so as soon as we get a new one, we've stayed on top of it, so I just didn't want that 83 number to scare anybody," Christina Brignac, a DOTD project manager, told Hodges' committee.

DOTD is one of the project sponsors and is handling the design and construction of four of the channel's required bridges. Brignac said the final appraisals should be finished in a few weeks.

The Corps is also waiting on modeling of the effect of future drainage from the canal on the Brooks Lake area near the Mississippi River to see if the agency should pursue rights to flood the area or improve a bayou there. That isn't expected to generate delays.

In late October, U.S. Rep. Garret Graves, R-Baton Rouge, sent the Corps of Engineers and the state Department of Transportation and Development a letter already airing his worries about "slippage" in the project schedule and doubts the diversion would be finished at the end of 2021. He asked the agencies to find way to hold to the previous schedule for the fully funded canal.

"As you know, funds obligated through the Bipartisan Budget Act were meant to get proactive flood control solutions on the ground before the next storm," Graves wrote.

Talked about since the 1960s and studied intensely in the 1980s after the then-historic 1983 flood, the canal finally gained the dollars and political will that it needed to be built after another historic flood, in August 2016, devastated the region again.

Some property owners in Ascension, East Baton Rouge and Livingston parishes have paid property taxes to the Amite River Basin Commission to support of the project since 2001; the 2018 act that Graves and other Louisiana congressmen championed set aside $343 million to finish the project.

The channel's direct, downhill path from the Zachary and Baker areas to the Mississippi River means the canal will intercept highways, pipelines, railroad tracks, flowing bayous and swampland and cross steep changes in terrain, complicating the execution of a concept that Congress authorized in 1992.

Each of those impediments had to be mitigated for or will require construction of specialized "features."

For instance, the canal will cut through three major waterways, and each intersection will require a 1,000-foot long "drop structure" made with crumbled rock to funnel water down into the new channel. A low-flow pump will also draw some water from the canal so the waterways below the future diversion continue to flow.

One of the projects expected to be awarded next month is the drop structure for White Bayou. The other is a new bridge for McHugh Road, under which the canal will also pass.

In May, the Corps of Engineers issued its first contract for the diversion in 15 years: a $55 million job for Baton Rouge-based James Construction to build a new four-lane bridge for U.S. 61 and another for the Kansas City Southern railroad line that runs parallel to U.S. 61.

That work will require digging out a small section of the future canal, over which the new bridges will be built. That section of the canal will link it with the Lilly Bayou Control Structure, which was finished in 2011 and will help direct water to the Mississippi.

Corps officials said progress is happening on that U.S. 61 section of the construction job.

"So we're starting to get that traffic out of the way, so we can really begin construction in earnest in the center where the new (U.S. 61) bridge is going to be completed," he said.