The same Louisiana law that served as the signpost to create the new city of St. George is being used in an effort to stop the incorporation. Mayor-President Sharon Weston Broome and two East Baton Rouge Parish residents filed a lawsuit Monday, throwing the new municipality into a legal limbo.

Broome and others had threatened to sue even before voters decided Oct. 12 to turn unincorporated areas in the southeastern corner of the parish into a city of 86,000 people. A spokesman for the St. George organizers said their move Monday insults the 17,421 voters who turned out to vote for the new city.

“The city-parish is telling you that your vote didn’t matter,” spokesman Drew Murrell said. “They want to undermine a lawful election, and if they don’t like the results of that election they’re willing to litigate and bleed you dry to teach you a lesson.”

The lawsuit names St. George organizers Norman Browning and Chris Rials as defendants and stands to delay the creation of St. George for years to come. It essentially hinders the governor’s ability to appoint an interim mayor and five-member city council until after the litigation is resolved — not only in a state district court but through any appeals as well. 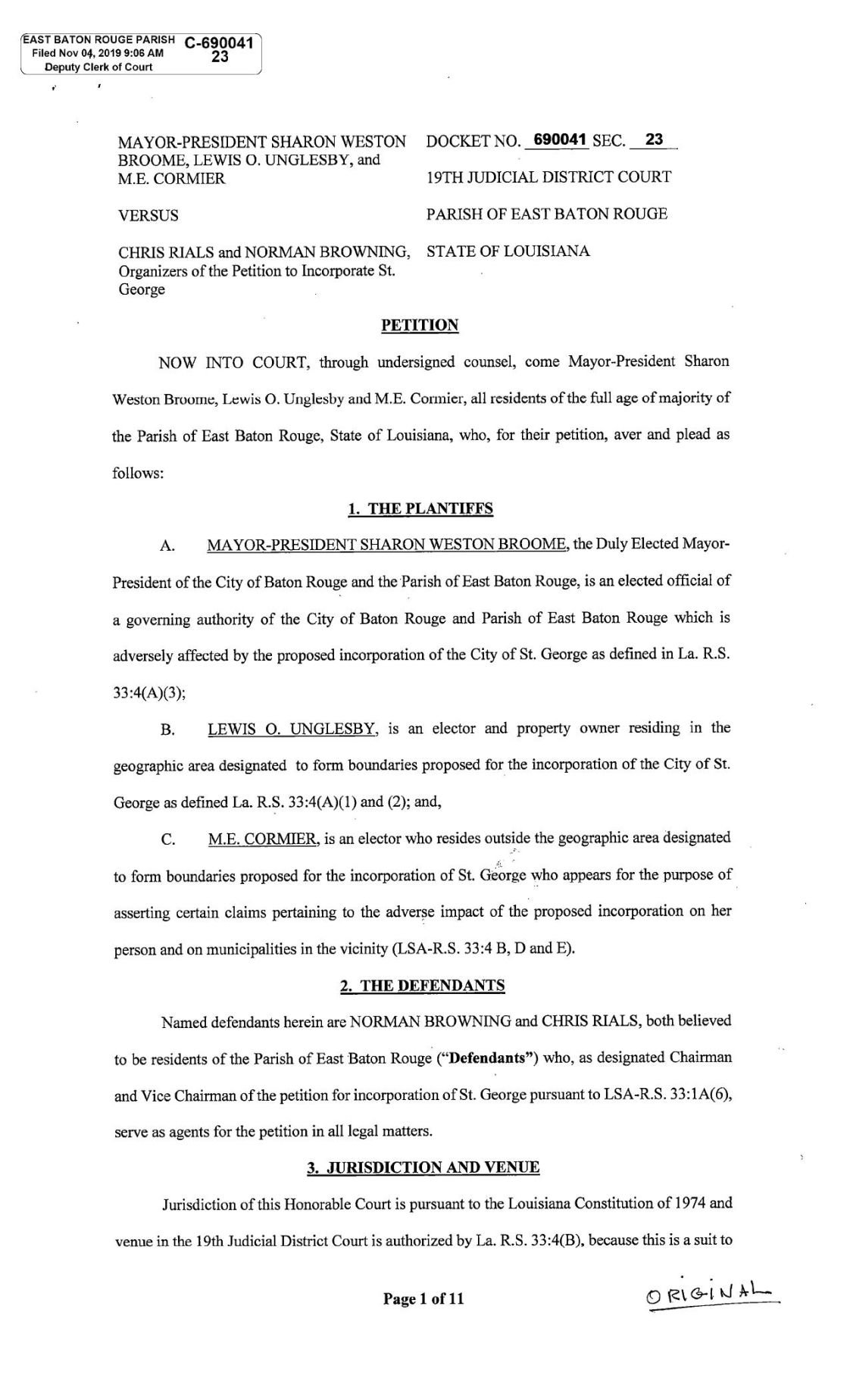 St. George would become Louisiana’s fifth largest city, and one that is predominantly white and well-to-do.

A 2014 attempt at incorporation failed to receive enough signatures to make the ballot. A St. George with a smaller footprint, after areas with large minority populations were carved out, easily made the general election ballot this year, and the incorporation question passed by a 54-46 margin.

As expected, the lawsuit was filed at the 19th Judicial District Court by Baton Rouge attorney Mary Olive Pierson, who is joined by attorneys Brett Furr and Larry Bankston. It was assigned to District Court Judge William Morvant.

Mark Armstrong, the mayor-president's spokesman, said private donors are financing the legal challenge against St. George, addressing worries that the city-parish would use taxpayer money to sue its own residents.

“This challenge is specifically provided for in the statutes which allow the incorporation of St. George and is for the purpose of testing the authenticity, credibility and feasibility of their numerous campaign promises to create, organize, finance and operate a city,” the team of attorneys said in a statement Monday. “The evidence will show that the organizers are ill-prepared to operate a city as well as the adverse impact on the City of Baton Rouge and citizens who live outside the arbitrary boundaries of the proposed city of St. George.”

Can legal fight to block St. George succeed where battle over Central failed?

Plaintiffs joining Broome are Baton Rouge attorney Lewis Unglesby, who lives within the proposed boundaries for St. George, and M.E. Cormier, a Baton Rouge resident and leader of Better Together/Residents Against the Breakaway — one of several opposition groups that came out against St. George.

While Cormier's group includes the phrase "Residents Against the Breakaway" in its title, St. George would not break away from anything. The effort to create a new city involved unincorporated areas, and the new city would remain a part of East Baton Rouge Parish.

The suit asserts a parishwide election would have to take place so the city-parish’s Plan of Government could be amended to recognize St. George as the fifth municipality in the parish. A current provision prohibits the recognition of any city other than the four that already exist – Baker, Baton Rouge, Central and Zachary. 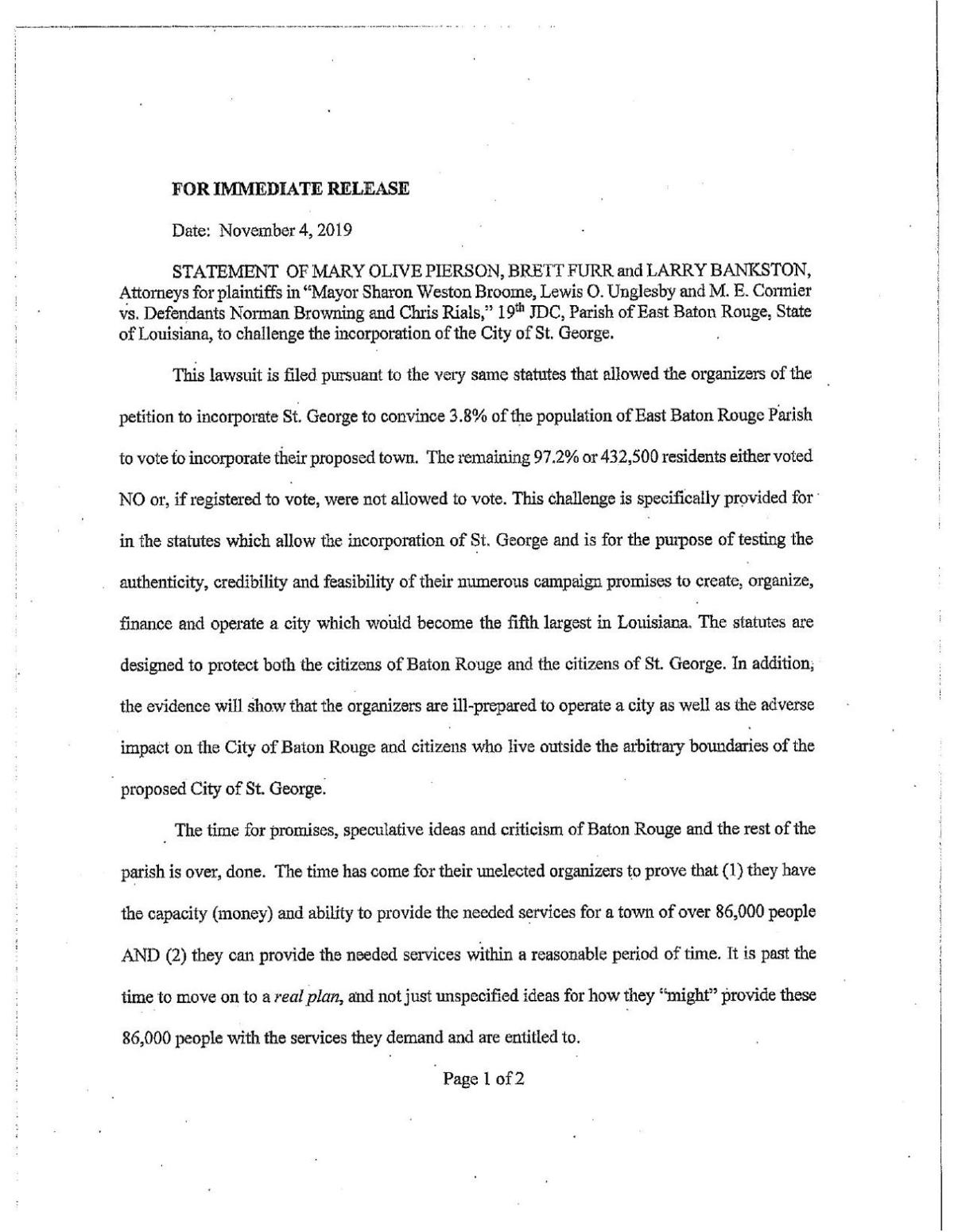 A group of residents tried to make a similar argument when it challenged the incorporation of Central 15 years ago. The 1st Circuit Court of Appeal ruled that Plan of Government provision was unconstitutional since it conflicted with a state law that prohibited limitations on the formation of municipalities.

Broome and others are contesting the incorporation under Louisiana Revised Statute 33:4.

The statute says a district court judge has to determine whether an "incorporation is reasonable" and if the proposed municipality, in this case St. George, can provide "public services within a reasonable period of time."

The statute also asks the court to consider the "possible adverse effects the incorporation may have on other municipalities in the vicinity."

The city-parish and opponents questioned before the election whether it was fair to let residents in a corner of the parish make a decision that could have a great financial impact on parish residents who do not live in St. George.

Opponents used the results from a 2018 study performed by LSU economist Jim Richardson and public administration professor Jared Llorens to support their arguments.

That study said St. George's organizers overestimated the city's potential revenues and underestimated its expenses, which would lead to a deficit for the new municipality.

St. George's supporters have repeatedly dismissed the study, in part because it was commissioned by One Baton Rouge, a group opposed to St. George's creation.

In May, Broome's administration released another study claiming the city-parish would lose $48.3 million annually if the St. George incorporation happened and that government agencies would need to make across-the-board cuts of at least 18%.

The lawsuit says the creation of the city would negatively impact Baton Rouge by leading to a substantial reduction and necessary cuts to all city-parish services, hinder the ongoing obligations the city-parish has to pensions and retirement benefits for present and future employees, impair the city-parish’s bond indebtedness and reduce the city-parish’s financing ability by reducing its credit rating.

The lawsuit even picks apart language in the petition organizers used to get the measure on the ballot, saying it violated aspects of the state statute because organizers failed to commit and develop a plan for the list of municipal services St. George would provide to its residents.

The petition simply says the city “may provide” certain services – like planning and zoning, building inspection, maintenance of right of ways and the city’s drainage system – once incorporated, instead of saying it “shall provide” those services.

During the campaign, proponents consistently claimed they would likely operate many of their municipal services through public/private partnerships like Central, but were never clear on exactly which services they intended to privatize and which ones they hoped to keep under the umbrella of the city-parish.

Murrell said the “may provide” language would allow the proposed city to “pick and choose” the best partners for providing services. St. George’s organizers have long said they plan to privatize a number of city services.

The lawsuit goes on to criticize organizers’ intentions to utilize the East Baton Rouge Parish Sheriff’s Office as the primary law enforcement for the proposed city, claiming state law requires cities with more than 13,000 residents to have their own regularly paid fulltime police and fire departments with civil service boards.

The lawsuit further dings organizers for only setting aside an additional $4 million, on top of the property taxes St. George residents will still have to pay to the Sheriff’s Office for service, for police protection.

Attorneys also argue St. George proponents intentionally diluted minority voting power within the proposed city when, after failing to get enough signatures during their first petition drive, they re-drew the boundaries and carved out nearly all the areas where large concentrations of minorities lived.

Lastly, they assert the awkward boundaries for the second map voters improperly split certain precincts making it harder to ensure the right people voted on the incorporation and opened a window for potential voter fraud.

Murrell said the mention of potential voter fraud is silly, adding that its indicative of the circus atmosphere that’s likely to follow the lawsuit.

“It’s a throwaway paragraph to hide the ball and distract from the reality that we had an election where a majority of the citizens voted to incorporate,” Murrell said.