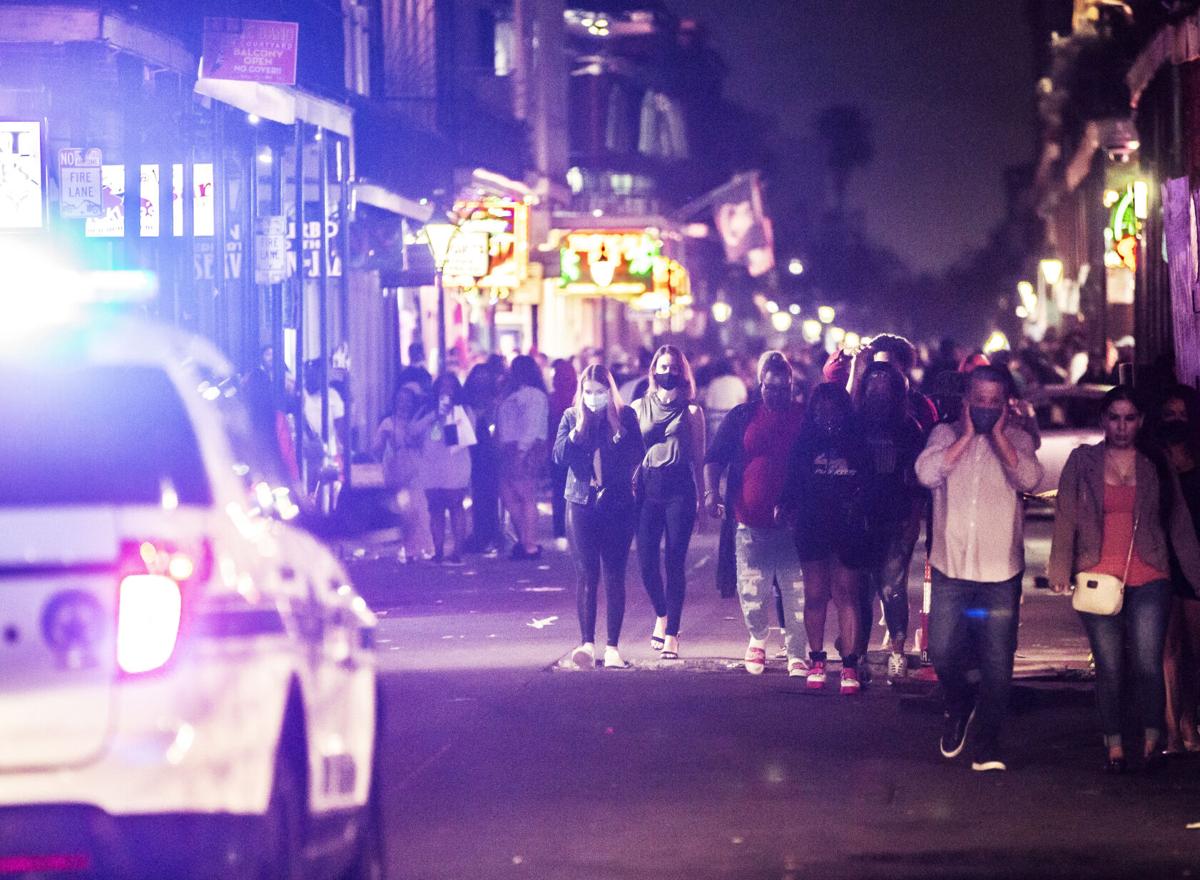 Pedestrians cover their ears as New Orleans Police Department vehicles use a siren as they travel down Bourbon street after the bars closed due to coronavirus restrictions in New Orleans, Saturday, March 13, 2021. On Wednesday, the city announced they will move into modified Phase 3 Friday which allows live music inside venues with restrictions. (Photo by Sophia Germer, NOLA.com, The Times-Picayune | The New Orleans Advocate) 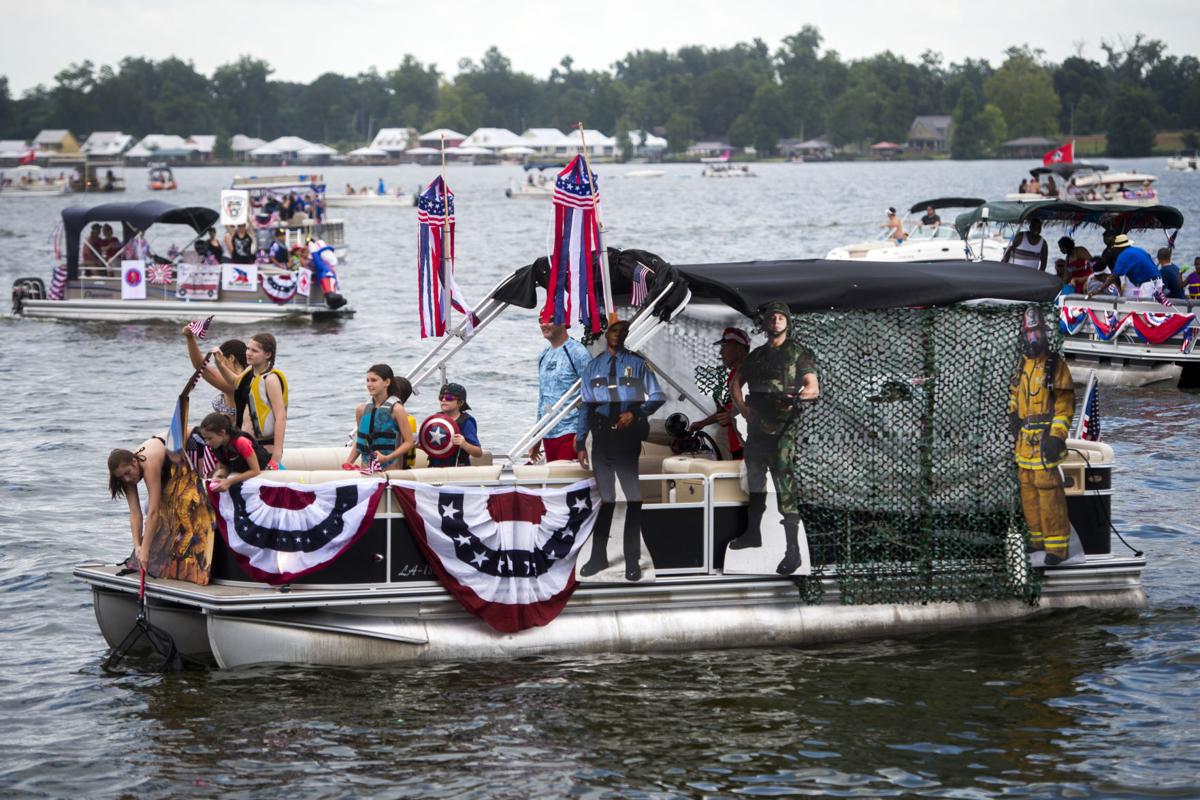 Pedestrians cover their ears as New Orleans Police Department vehicles use a siren as they travel down Bourbon street after the bars closed due to coronavirus restrictions in New Orleans, Saturday, March 13, 2021. On Wednesday, the city announced they will move into modified Phase 3 Friday which allows live music inside venues with restrictions. (Photo by Sophia Germer, NOLA.com, The Times-Picayune | The New Orleans Advocate)

It's another layer in a monthslong political dispute over Dukes' security details that has roiled the town and prompted a narrow majority of the five-member council to question whether it's appropriate for a mayor overseeing a city of about 4,400 people and a local government with a $12.1 million budget.

The new report also comes about three months after a still-pending criminal complaint accused the mayor of using his detail officer and city vehicle to ferry him around New Roads and Baton Rouge during pre-Fourth of July activities and then to bring him and his girlfriend to New Orleans' Bourbon Street for an overnight stay.

Filed in mid-July with the Pointe Coupee Sheriff's Office by a then-New Roads Police security detail officer, the complaint also accused the mayor, his girlfriend and another woman of smoking marijuana in his city-issued sport utility vehicle on Bourbon and visiting the strip club Rick's Cabaret for up to three hours while the officer was on the clock the evening and night of July 4.

The report says the mayor's girlfriend said he was "baked and drunk at the same time," and Dukes had smoked marijuana right in front of the officer's face.

"He's never done this in public this bad,'" the girlfriend added, the report says.

The security officer, a sergeant, was a 14-year veteran of the city department at the time.

His complaint adds that the other woman in the SUV told him not to worry about the mayor smoking marijuana because this kind of thing "happens all the time" and the other security officer who also drives the mayor around "does this stuff all the time."

The criminal complaint is being investigated by the Louisiana Attorney General's office and reviewed by the local district attorney. Dukes has not been cited or arrested in connection with its allegations, according to Brad Joffrion, Pointe Coupee Sheriff's chief deputy.

Dukes answered a phone call for comment Thursday. He would not immediately comment but said he would call back; he had not by Thursday evening.

The mayor, however, has previously denied he did anything illegal on Bourbon and has claimed he needs security because of threats that he has received as mayor.

In the new audit for 2020, auditors found taxpayer spending went to overtime for the city police officer on the mayor's detail, but timesheets and other reports offered no explanation about how the officer's paid time served city business.

Auditors say the failure to document the purpose of the overtime leaves open the possibility for misappropriation of public money "for non-city business."

"All reports examined reflected 'Mayor's Details' without any further explanation of events attended or reason for the security detail," the audit says.

The city auditors say that, under the current city ordinance, the use of the detail is predicated on what is "deemed necessary," but the city has no guidance on who determines what is "necessary" or how security money should be spent.

In February, the council adopted a resolution that would have required the mayor to request council authorization for security details, where he would have had to explain the nature of details. It would have also limited him to 50 hours of details per year.

But the mayor brushed off the resolution, saying it didn't have the force of law.

Weeks after the criminal complaint came to light, on Sept. 7, the council majority adopted, 3-2, an ordinance to bar the mayor's use of the security detail, minutes say.

But Dukes vetoed the ordinance and the five-member council failed to get the four-vote majority late last month to override his veto, city officials said.

Councilman Kirk White, a local barber who has led the effort to control the security detail, said he was skeptical of the mayor's claims of threats, instead saying the mayor was using the detail as his "designated driver" for bar and event hopping.

But White said that, at this point, he isn't sure what the council can do to address the audit findings given the current split on the council.

"I think where it leaves us, if he somehow skates by legally, then it's up to the court of public opinion to see whether not he keeps his job. That's the way I see it," White said. "If this behavior is condoned, it will continue to be made."

Councilman Vernell Davis, who has opposed limiting the security spending, said he believes the mayor has been threatened.

Davis noted that he and his family have also been threatened in recent months. He said he hasn't been shown anything yet that indicates the mayor has broken the law and the city ordinance gives the mayor the power to employ the details.

Davis said the continuing disputes over the details and the various reports that have come out, like the new audit, have made him question if deeper motives are at work against Dukes.

Davis said it's like someone is "trying to find something on him."

Along with the Louisiana Attorney General's Office, District Attorney Tony Clayton has been reviewing the July criminal complaint. Now the newly public audit findings will be added into the mix, Clayton said Thursday.

The 18th Judicial District prosecutor said investigators are still waiting on city credit card reports from the time Dukes was in New Orleans and other information. Clayton said he hasn't yet fully reviewed the audit.

"I would have to wait until the end of (the AG's) investigation to make whatever conclusions we're going to make. So, really, we're still at level until we get all the reports and everything back," Clayton said.