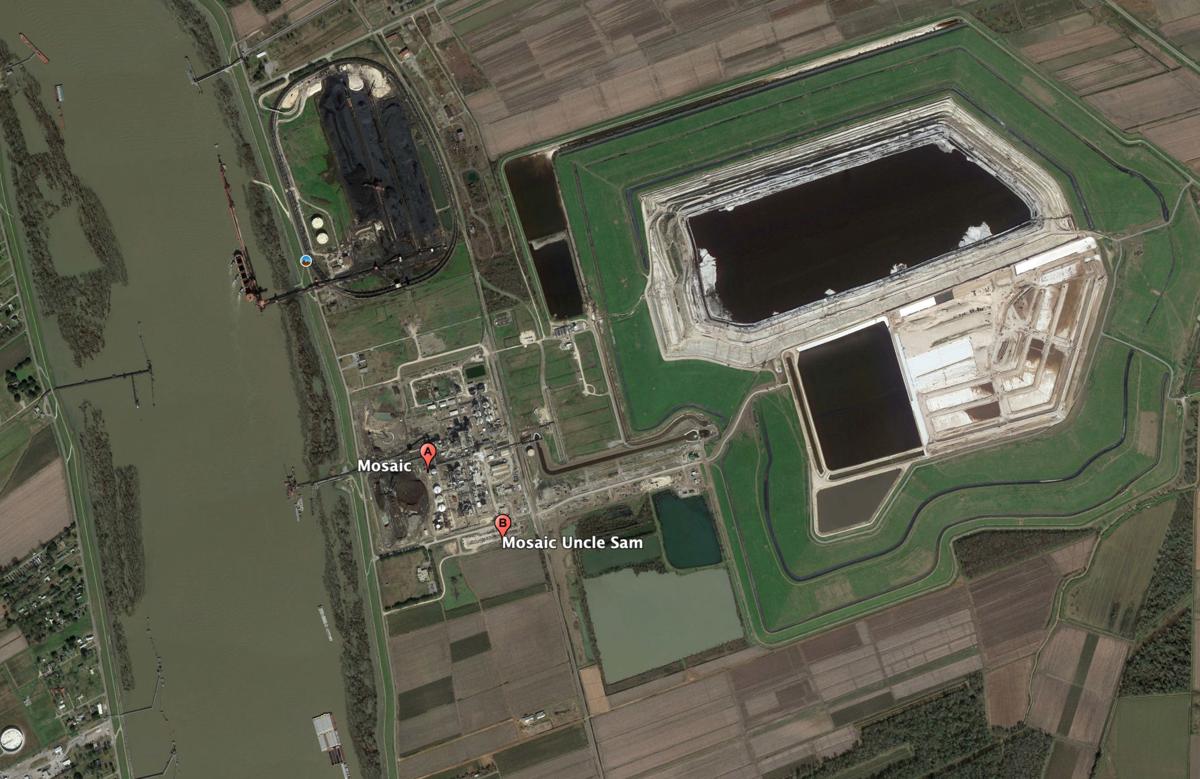 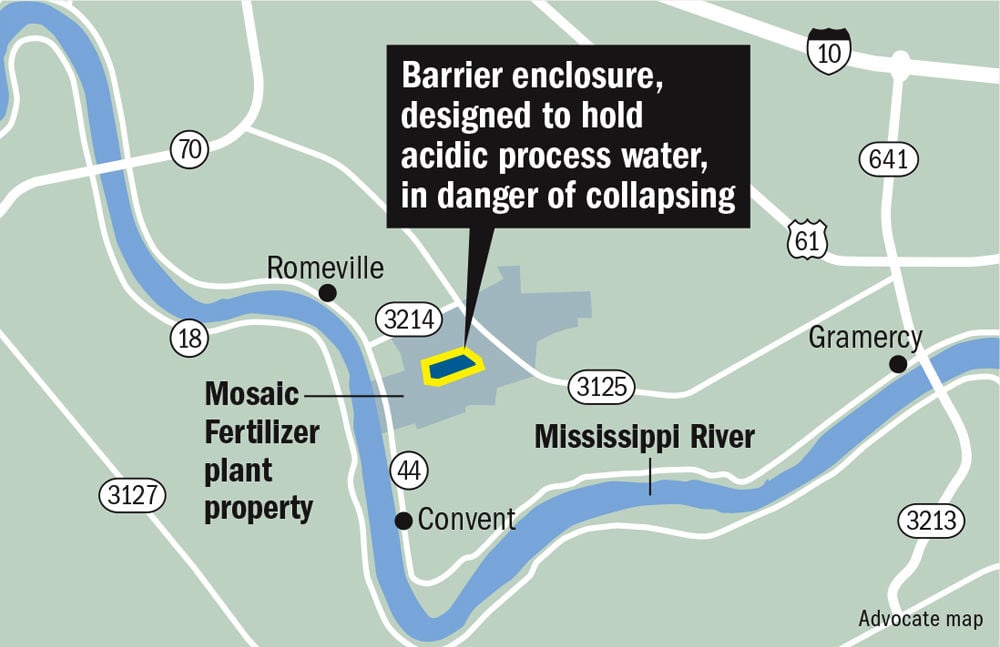 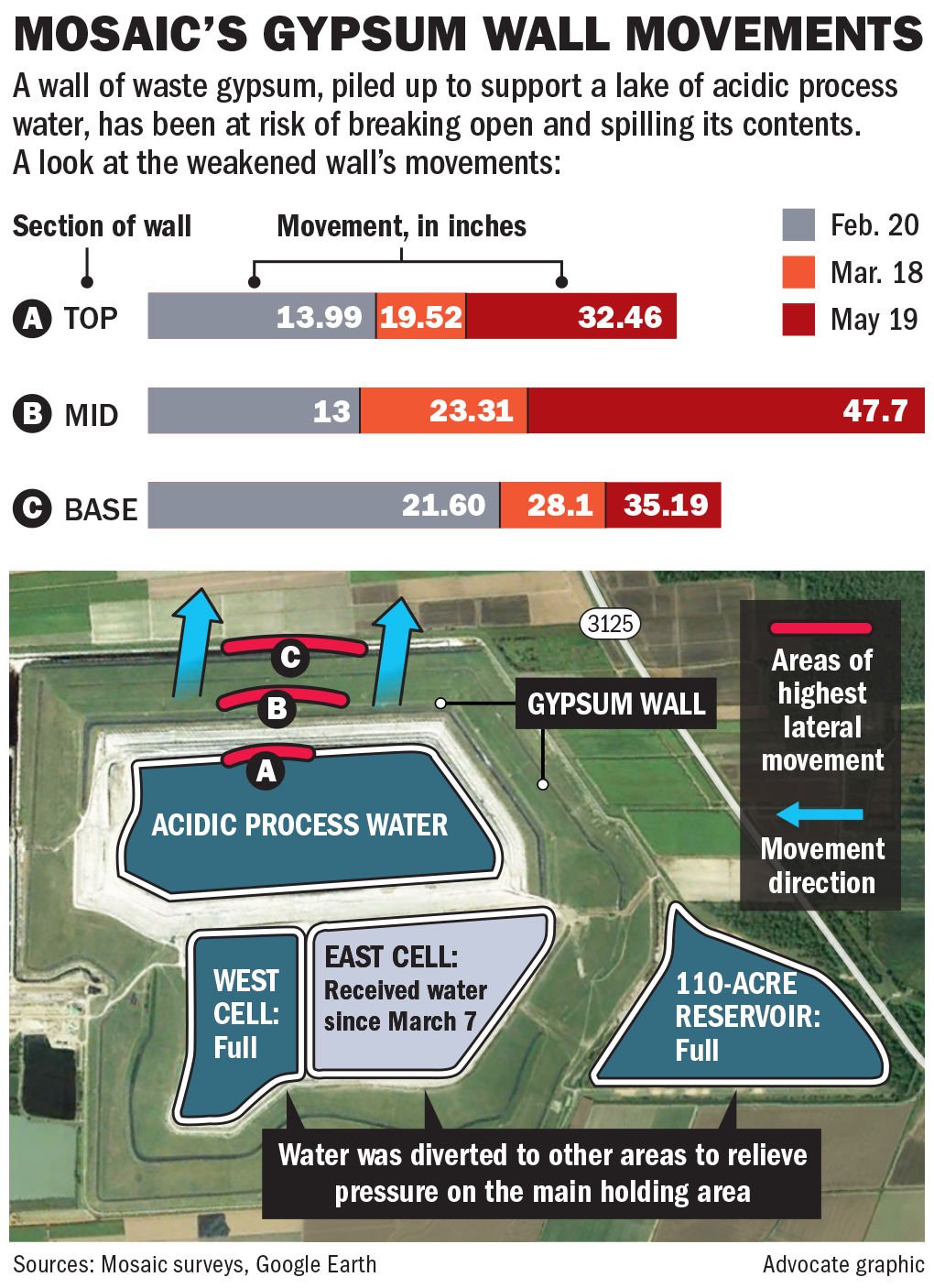 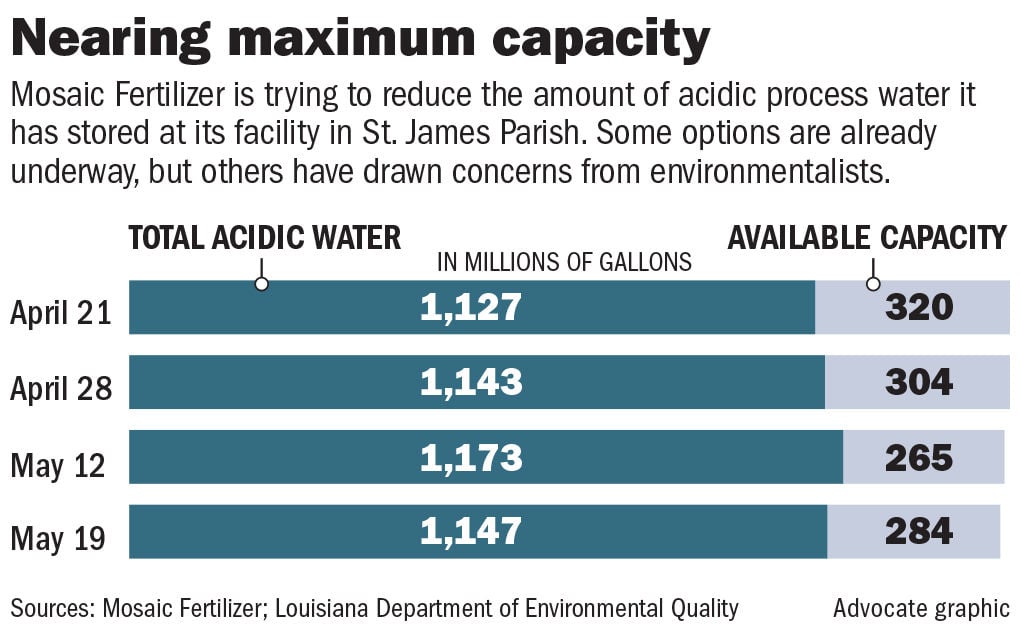 CONVENT — Mosaic Fertilizer wants to remove 300 million gallons of hazardous, contaminated water from its operations at the company's St. James Parish complex by Sept. 30 as regulators voice concerns that it's nearing the limits of containing the huge lake of acidic water.

But the option that Mosaic says can remove the most water the quickest — and without having to treat and discharge the acidic water into the Mississippi River — has drawn fire from environmentalists. They don't like it because, they say, it would mean spraying a mist of the water contaminated with radioactive and metallic elements into the air over workers and the nearby Convent community.

Heavier-than-normal rainfall over the past several years and the discovery of a slipping 2,000-foot-long wall of waste gypsum at the end of 2018 have cut into Mosaic's overall storage capacity.

With a key storage lake threatened by the moving wall, Mosaic shifted hundreds of millions of gallons of water from that 140-acre lake to others in recent months to slow the wall's slippage and prevent a catastrophic release of the water into nearby swamps.

"They continue to accumulate water out there, and at the rate they are accumulating it, there's a concern that, you know, we will reach a point where something's gonna happen," said Elliott Vega, the state Department of Environmental Quality's assistant secretary of permits.

He said DEQ is trying to work with the facility on a number of fronts "to come up with a workable plan to address the water balance out there."

The facility on the east bank of the Mississippi known as the "Uncle Sam" site has ponds carved inside the mountainous waste gypsum pile, like the 140-acre lake, and also elsewhere on the 3,300-acre site.

Working as both rainfall collection cisterns and discharge storage ponds, the ponds are links in a recycling loop that moves around the hazardous process water mixed with rainfall to make phosphoric acid for agricultural fertilizer. They help maintain what the company calls its "water balance."

Among the options to get rid of the excess water, the company has already increased its ongoing injection of the acidic water into underground wells and will start shipping some of the acidic water by barge across the Mississippi to the company's west bank Faustina plant. That option, which starts June 1, takes only 100,000 gallons per day but won't lead to any discharges into the river, a company spokeswoman said.

Evaporation of the acidic water holds more potential, the company says. Mosaic wants to install by July up to 12 huge fans from vendor Minetek and remove 223 million gallons of the acidic process water by the end of September, according to company presentations to regulators.

Mosaic officials say they are trying to make room for lots of rain this year as hurricane season resumes June 1. But, they say, the facility's ponds aren't at imminent risk of overtopping, despite the claims of environmentalists.

Callie Neslund, spokeswoman for Mosaic, said the company has capacity to manage an additional foot of rain even after an extreme rainfall year.

Wilma Subra, a chemist by training and a technical adviser for the Louisiana Environmental Action Network, said that in Louisiana's high humidity environment, chemical plants and refineries can have clouds of mist and chemicals hovering over them due to their emissions and the high water content already in the air.

Subra noted that despite regulators' early concern about not letting the acid water escape into the broader environment, Mosaic's evaporation plan would do something similar, just drop by drop through the air.

"They are going to be creating their own weather," Subra said of Mosaic's plans, "and they are going to be allowing those chemicals to be precipitated out on the land and in the environment and on the community surrounding the facility."

Prior testing of the water, which has an acidity akin to lemon juice or vinegar, has shown the liquid has heavy amounts of phosphorus, fluoride and sodium and trace amounts of heavy metals like cadmium, chromium, iron and lead, as well as the radioactive elements radium and uranium, according to company documents submitted to regulators.

Subra claims that based on her calculations from Mosaic's own reporting to DEQ, Mosaic would have to release hundreds to thousands of pounds of contaminants into the air to reach its Sept. 30 goal, threatening the environment and public health.

The DEQ's Vega said the state agency has not yet received a formal permit request to use the evaporator fans and is waiting on more data from Mosaic about what kind of air emissions the fans would create before the agency can even consider that as a viable option.

"We are obviously aware of everybody's concerns," Vega said.

The U.S. Environmental Protection Agency is also involved in sorting out the company's options to reduce water levels, an agency spokeswoman said.

In late 2015, Mosaic reached a $2 billion settlement with the EPA and DEQ over allegations the company mishandled some of the wastewater from its plants in Florida and Louisiana and improperly mixed it with normal process water in the gypsum stack.

Mosaic has plans to build a third injection well, but even without the third well, the company says it will reduce the acid water volumes, at current rates, by 134 million gallons through Sept. 30.

The company had also explored shipping the acidic water by 18-wheeler to the Faustina plant, where water would be treated and released into the Mississippi, a drinking water source for communities downstream like New Orleans. But company officials said that plan has been put on hold.

Regulators have also discussed treating the water at the Uncle Sam site with a different process. DEQ officials said any releases into the Mississippi would have to meet standard water discharge requirements.

The gypsum wall also continues move, though more slowly, daily reports show. The problem remains a concern for DEQ, though officials said the emergency of earlier this year has passed.