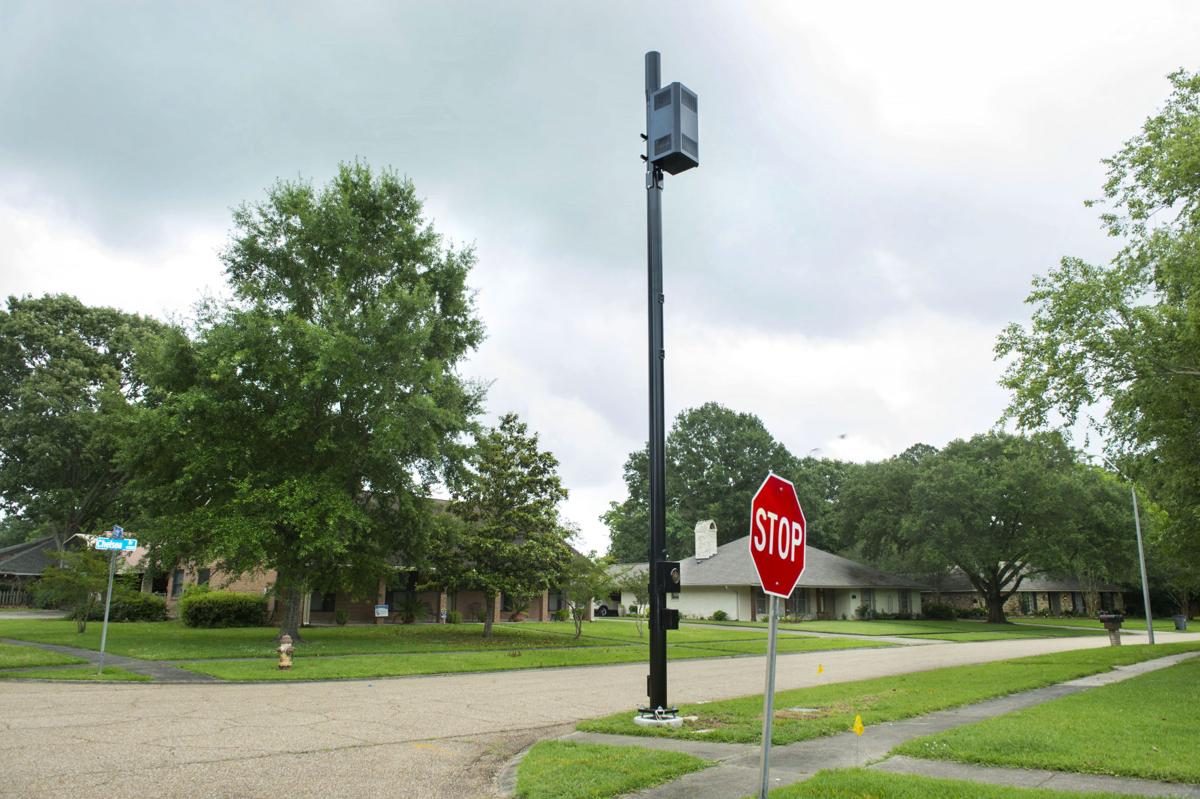 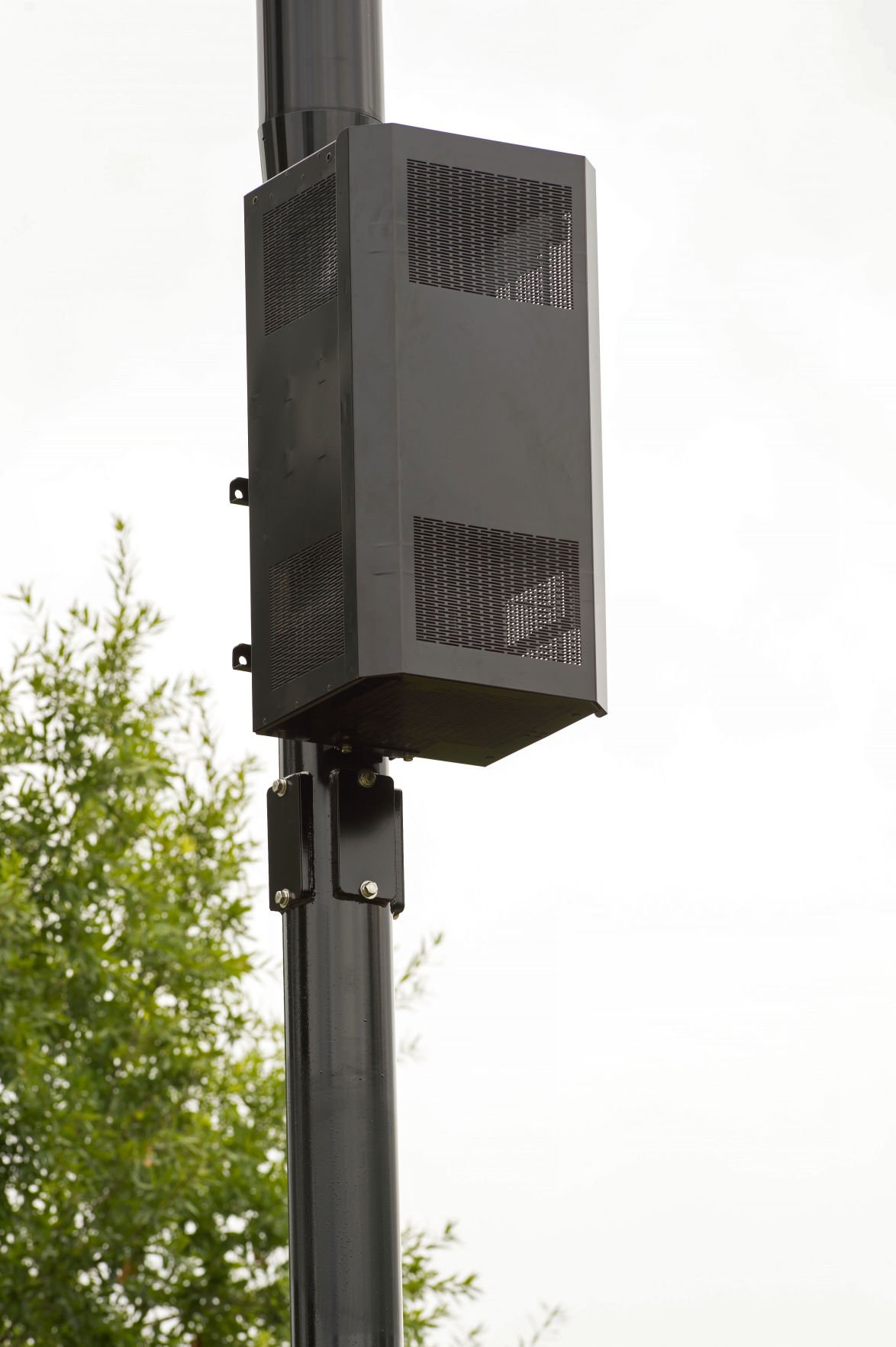 Top of neighborhood-located cell phone tower, at corner of Chelsea Drive and Blecker Drive, Saturday, May 11, 2019.

Top of neighborhood-located cell phone tower, at corner of Chelsea Drive and Blecker Drive, Saturday, May 11, 2019.

A telecommunications company has been installing new, smaller cell towers intended to boost signal strength around town and allow for the next generation of technology. But now that poles are beginning to show up in front of people's houses, neighborhood groups are crying foul.

Homeowners angry over the placement of the towers in rights-of-way outside their homes complain that they are "hideous" and devalue their property. But city-parish officials said the Federal Communications Commission restricts what say local governments have over their placement.

So-called "small cell equipment" supplements traditional, more massive cell phone towers. The gear provides an extra jolt when the network is busy but only has a short range. Companies install small cell equipment different ways, but in Baton Rouge AT&T has opted for small towers that look a bit like lamp posts but with a box on the side instead of a lighted arm.

Cox also has a small cell program but has not yet entered the Baton Rouge market with them, though their equipment, which is "about the size of a football" hooks onto existing infrastructure, said spokeswoman Sharon Truxillo.

"They can be mounted virtually anywhere: on cable strands, on light poles, street lights and or structures at the 35 feet height range," she wrote in an email to The Advocate.

The city-parish has already permitted dozens of AT&T units, many of which can be seen downtown or along major roads, mostly in south Baton Rouge. Recently, the company began forays into neighborhoods, where they're building small cell towers on the public rights of way in front of houses. Residents worry about the views from their houses and their property values.

As New Orleans makes 5G wireless push, some not fans of these 'monstrous' devices

Recently, two 8-foot-tall black cylinders popped up on a street corner about a block from Ken Caron's home, pushing the street signs that stoo…

One pole was installed in front of Todd Heston's Westminster home last week. At first, he didn't know what it was for, since he hadn't been notified. He's contacted his local Metro Councilman Matt Watson and is trying to figure out what can be done.

Baton Rouge-area civic associations scheduled a meeting last Thursday to talk over concerns about small cell towers, though it was canceled due to torrential rains that day. Still, individual neighborhoods are trying to sort out their next steps.

"These went up without any of us knowing about it. ... People are coming home, and these towers are sitting up in their yards," said Paula Kemp of the Westminster Crime Prevention District.

AT&T representatives did not respond to a request for comment last week. However, the company has published information on their small cell program online.

Is 5G technology coming to New Orleans? City Council approves framework that could make it happen

In addition to helping fix dead spots, the gear will allow for fifth-generation —or 5G — technology, AT&T has written. The average 4G user with a 56 megabits per second browsing speed could jump to 490 mps with 5G, telecommunications company Qualcomm estimated last year. The technology also allows smart cities to install digital infrastructure to help with traffic, irrigation and other concerns, AT&T has written.

As companies become more reliant on laptops, cell phones and other mobile devices to do business, and as individuals use more data to stream videos and the like, telecommunications networks must become denser, AT&T argued.

"This is why we are investing in and deploying small cells in states across the country. Small cells help us bolster network capacity, better meet surging consumer and business demand for more data and faster connectivity while preparing our network for the next generation of technologies and services—like 5G, the Internet of Things and smart cities," the company wrote.

Still, residents like Kemp are angry about the way AT&T has gone about installing the "hideous" poles in their neighborhoods.

Heston wonders why the company couldn't put the towers somewhere where they'd be less of an eyesore and a hit on somebody's property value. He suggested one of the lots still left vacant since the 2016 flood.

City-Parish Chief Administrative Officer Darryl Gissel passed along the response AT&T has given the city: the devices have a short range — AT&T claims its most powerful model has a 1,500-foot radius — so to keep from having any holes in the network, the towers must be built in certain areas. Once, city officials asked if a tower could be moved across a street, but even that was too great a distance, Gissel said.

Metro Councilman Matt Watson is still livid that AT&T does not appear to be advertising where they plan to build so residents have a chance to petition to see if there are other options. On the city-parish permit form is written "approved plans must be on job site," which he interprets to mean the work must be noticed in advance on the plot of right of way land where they intend to build.

Watson also remains frustrated that AT&T "wrote their own ticket" when the city-parish first passed the ordinance allowing small cell towers. The city-parish is allowed to charge up to $1,000 in application fees, plus a $250 annual rate for each device in the right of way.

A fight is brewing over how much companies should pay to use public property in Baton Rouge to deploy the next generation of wireless technology.

When the ordinance passed in 2017, Watson was the lone no vote, arguing that the rate was too low. The city-parish also didn't make insurance plans or put together any contingencies if the pole is abandoned and the public is on the hook for removing it, Watson said in a recent interview.

"Obviously we have an issue. ... Somebody's going to have to review the rules," said councilwoman Barbara Freiberg.

She said she's still trying to figure out exactly how much control the city-parish has in the permitting process.

Very little, according to city-parish staff. In 2018, the Federal Communications Commissions put restrictions on municipalities, Gissel said. The city-parish mostly checks to see if a unit will block a driveway or pose some kind of safety threat, he said.

"It's pretty straightforward. ... We can't just arbitrarily say 'we don't want it there,'" due to the FCC restrictions, he said.

Still, some residents are considering action.

"There will be political and legal next steps," said Gary Patureau of the Tara Civic Association, though he was not ready to speak in specifics.

"This person's home value has just been reduced dramatically."