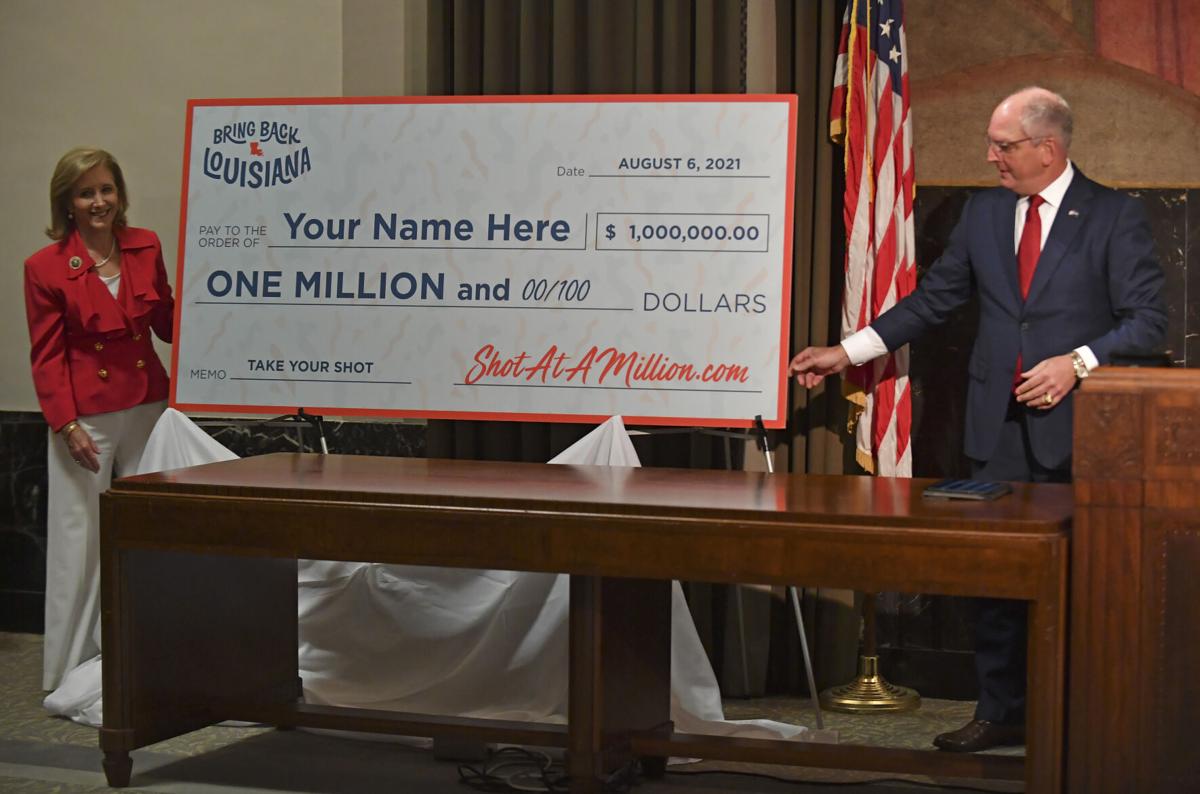 First Lady Donna Edwards, left, and Governor John Bel Edwards, right, unveil a giant check as it is announced that Louisiana will participate in a lottery, giving cash prizes and scholarships to residents who have been vaccinated against Coronavirus, Thursday, June 17, 2021, at the Louisiana State Capitol in Baton Rouge, La. 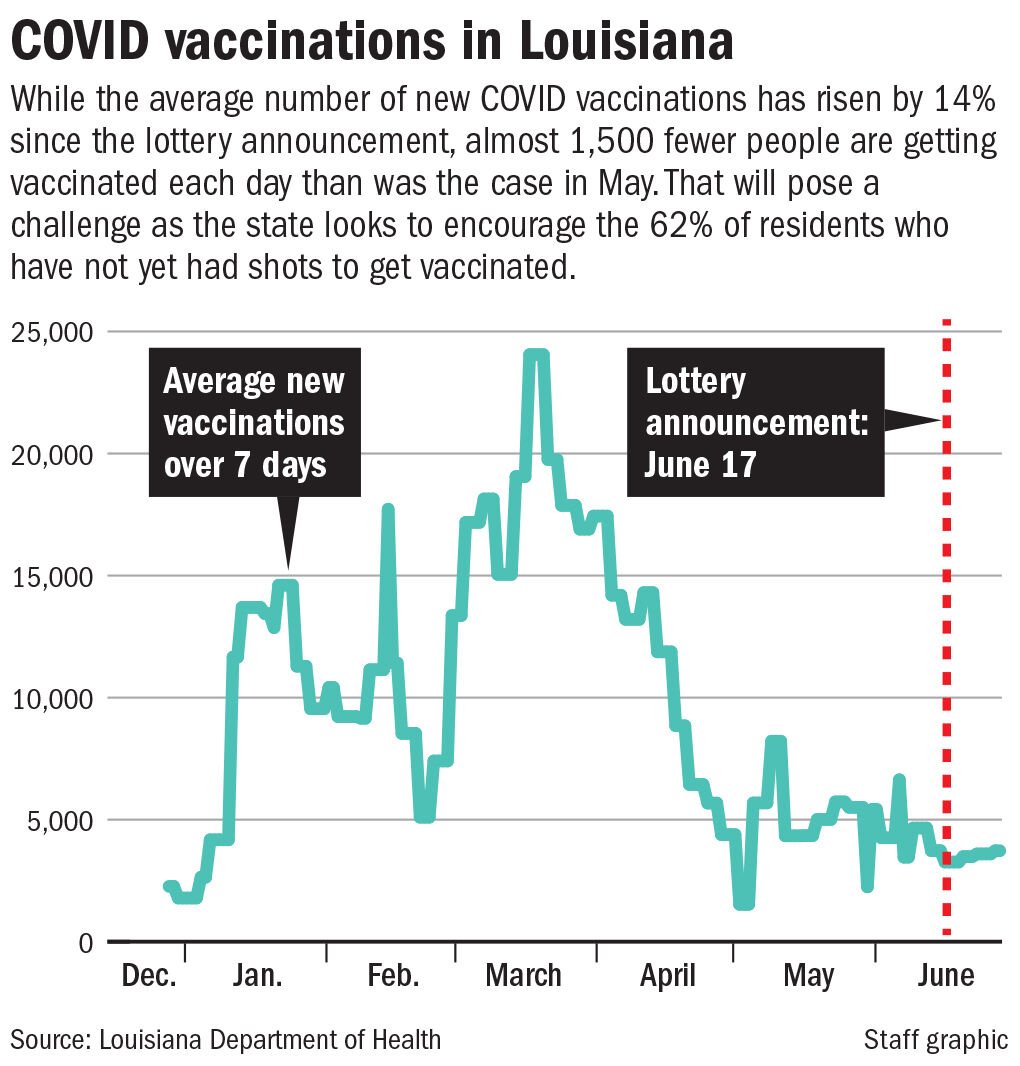 The number of people in Louisiana who received their initial COVID-19 vaccine increased by 14% in the week after the state opened registration for its $2.3 million lottery incentive, though even with the modest bump, vaccination rates remain at historic lows.

Over the seven-day period ending Monday, 26,086 people received either the one-dose Johnson and Johnson vaccine or the first part of the two-dose Pfizer or Moderna vaccination, according to Louisiana Department of Health data.

That’s an increase of more than 3,200 from the 22,842 people who received their first shot in the week leading up to June 17 when Gov. John Bel Edwards unveiled a collection of cash prizes and scholarship giveaways, including a $1 million jackpot.

The change evens out to an increase of roughly 460 new doses a day, according to an analysis by The Times-Picayune and The Advocate.

State officials cautioned against using the department's publicly available data to measure the impact the Shot At A Million campaign has had on vaccination rates. That’s because there’s sometimes a two- to- three-week delay between when a shot is administered and when the state’s online dashboard is updated, according to Kim Hood, an assistant health secretary.

“We don’t want to get over our skis,” Hood said. “When we’re looking for a trend and trying to tease out what the lottery has done, we want to make sure we’re not comparing apples to oranges.”

Hood said the state will have a better idea of the lottery’s impact next week, when data can be parsed to include shots given only after the incentives were unveiled. She expects there to be a “flurry of activity” leading up to July 9, the deadline to register for the first of five weekly drawings.

What are Louisiana COVID vaccine lottery prizes? Here's a list, including $1M jackpot

Louisiana’s experiment offering cash incentives to boost vaccination rates mirrors an initiative pioneered in Ohio, which recently wrapped up its lottery – with mixed results. When Ohio’s Republican Gov. Mike DeWine first announced the effort in May, weekly vaccinations there jumped 43%. But the effect was short-lived, and vaccinations soon fell off.

Hood said that Louisiana has had the “benefit of seeing what a couple of other states have done,” and expects the numbers here to follow a similar trajectory: a spike in vaccinations followed by a return to baseline.

New vaccinations in Louisiana have dropped off dramatically since peaking in March, when eligibility was expanded to include essential workers and those with one of a dozen, broadly defined medical conditions. At its peak, nearly 25,000 new vaccinations were administered daily.

It tapered off through April, as the supply of doses eclipsed demand. During that time, a federally-backed mass vaccination site opened in Baton Rouge with the capacity to deliver 3,000 jabs a day. In its first week, the site administered around 100 a day.

By May, the number of new vaccinations had settled into a relatively stable and low rate of about 5,185 vaccinations per day.

Louisiana residents who get a COVID-19 vaccine by the end of July will be eligible to enter to win a $1 million jackpot, Gov. John Bel Edwards…

But beginning in June, vaccination rates again began trending downward, even as Louisiana began doling out perks for vaccinated residents, including free admission to state parks and historic sites and complimentary drinks at certain bars and restaurants.

In the week leading up to the lottery announcement, the number of new vaccinations bottomed out at an average of 3,263 per day.

Since then, the trend line has slowly bent upwards, and the average number of new vaccinations is now at 3,726 doses per day. Still, that's 28% lower than the May daily average — representing about 1,500 fewer new shots in arms a day.

Meanwhile, the state has poured itself into a resource-intensive, grassroots campaign, with door-to-door canvassing and pop-up clinics, aimed at convincing the "moveable middle" to get vaccinated, Hood said.

"A lot of people have questions, but aren't necessarily opposed to the vaccine," Hood said. "We take all people's concerns seriously. We're not flippant about it. Our core responsibility is education."

Louisiana’s vaccination campaign has taken on added urgency in recent weeks as concerns mount that the new Delta variant could cause a surge in coronavirus cases among the unvaccinated come the fall — particularly in the Deep South, where inoculations have sputtered. The strain, first identified in India, is more transmissible and virulent than previous mutations, though the vaccines remain an effective defense.

United Nations Ambassador Linda Thomas-Greenfield pleaded with her fellow Louisianans Tuesday to get vaccinated against COVID-19, saying she "…

Louisiana ranks ahead of only Mississippi in its share of adults with at least one dose of the vaccine, at just over 48%, according to data from the U.S. Centers for Disease Control and Prevention. That's a stark contrast from states like Vermont and Massachusetts, where more than 80% of adults have been inoculated.

Since registration for the lottery opened, 486,661 people have signed up for a chance to win, according to a Health Department spokesperson. The deadline to register for the first of five weekly drawings is July 9 and signing up once enters you into all subsequent drawings. The first winners will be announced on July 16.

All Louisiana residents, ages 12 and up, who have received at least one dose of the Moderna or Pfizer vaccines or have received the single-shot Johnson and Johnson vaccine are eligible to enter the sweepstakes.

The vaccine lottery isn’t a “silver bullet,” Hood acknowledged, but as weekly winners are selected, she hopes the excitement that's generated will help keep vaccinations front-and-center in the public eye.

Our Views: A lottery, liquor shots, whatever it takes to get more vaccinations

Another grim milestone, more than 600,000 Americans are known to have died from COVID-19 and its often gruesome medical complications.