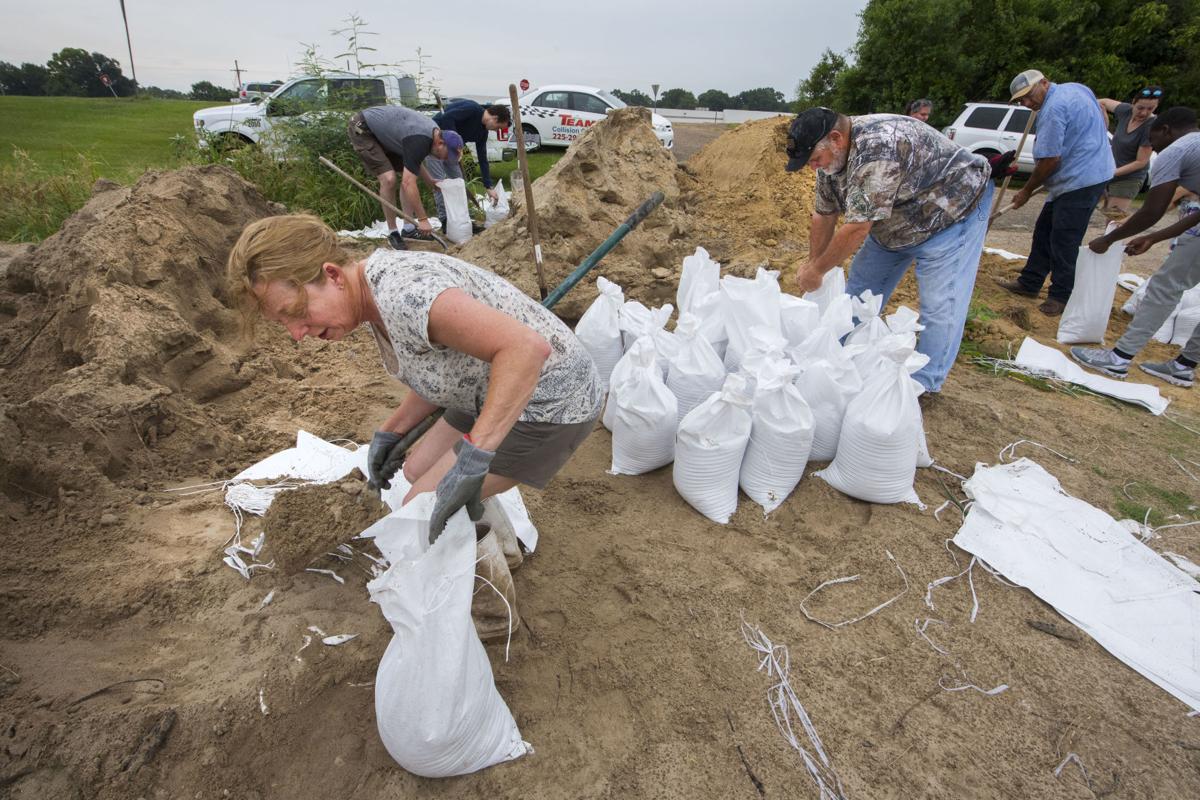 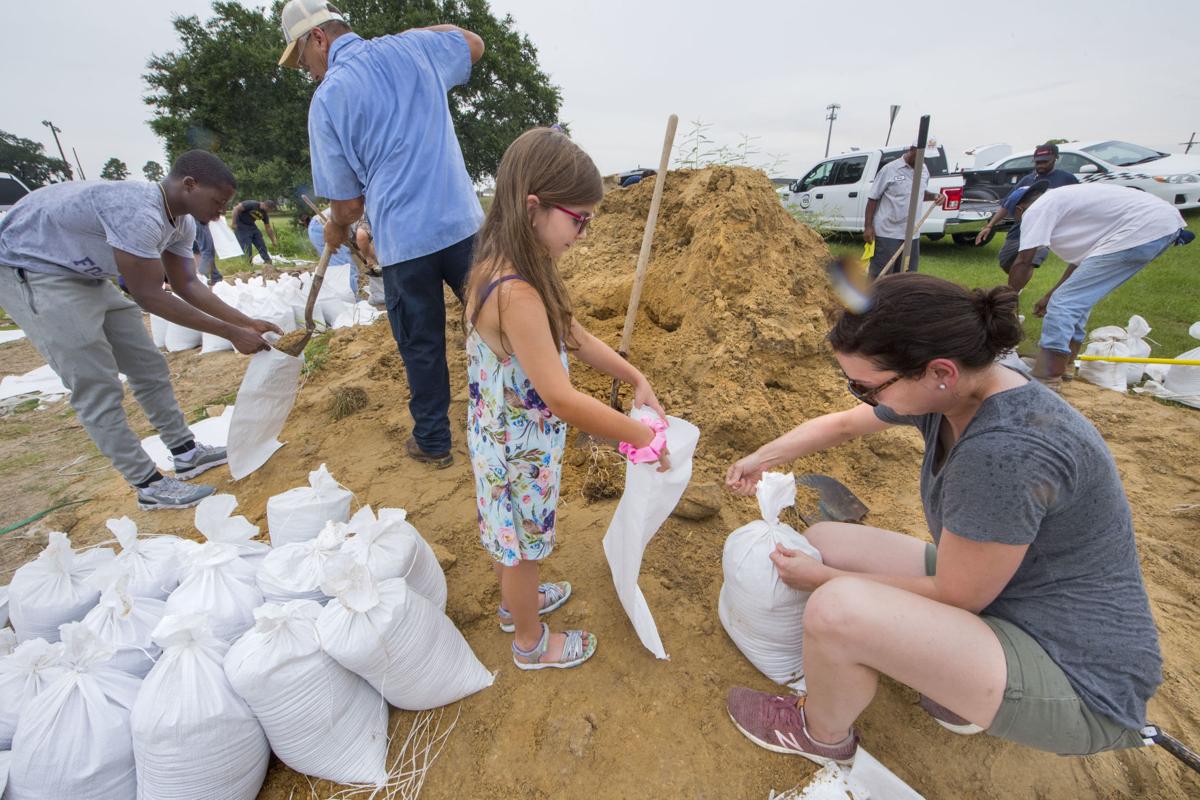 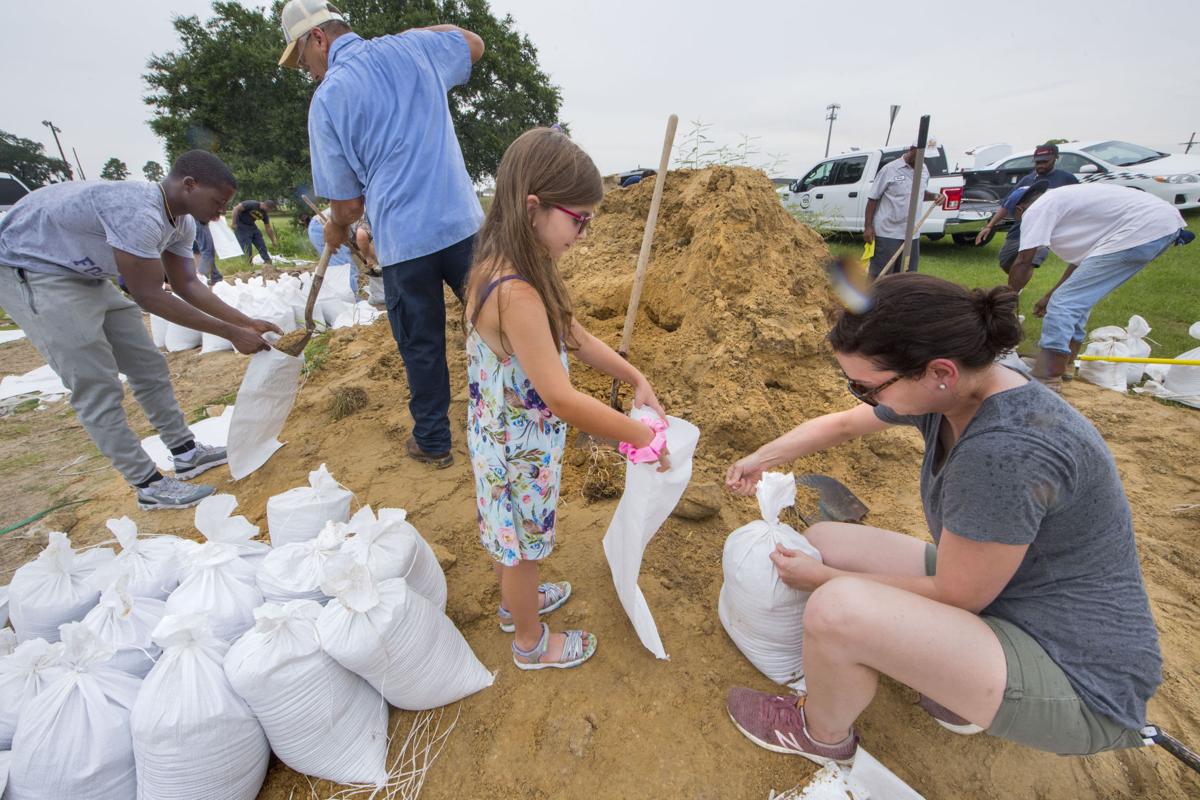 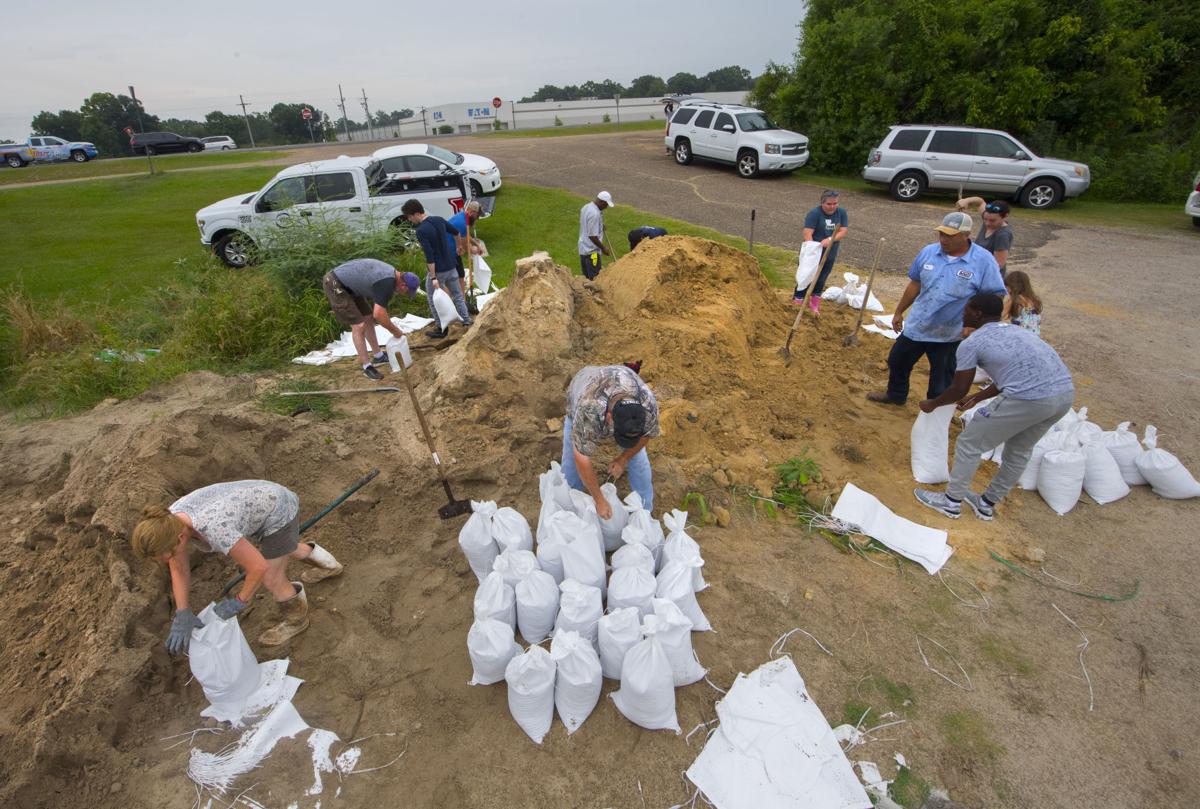 Area residents fill bags with sand in preparation for possible heavy rain event, at a sandbagging location at the BREC Fairgrounds at 16072 Airline Highway, Wednesday, July 10, 2019. 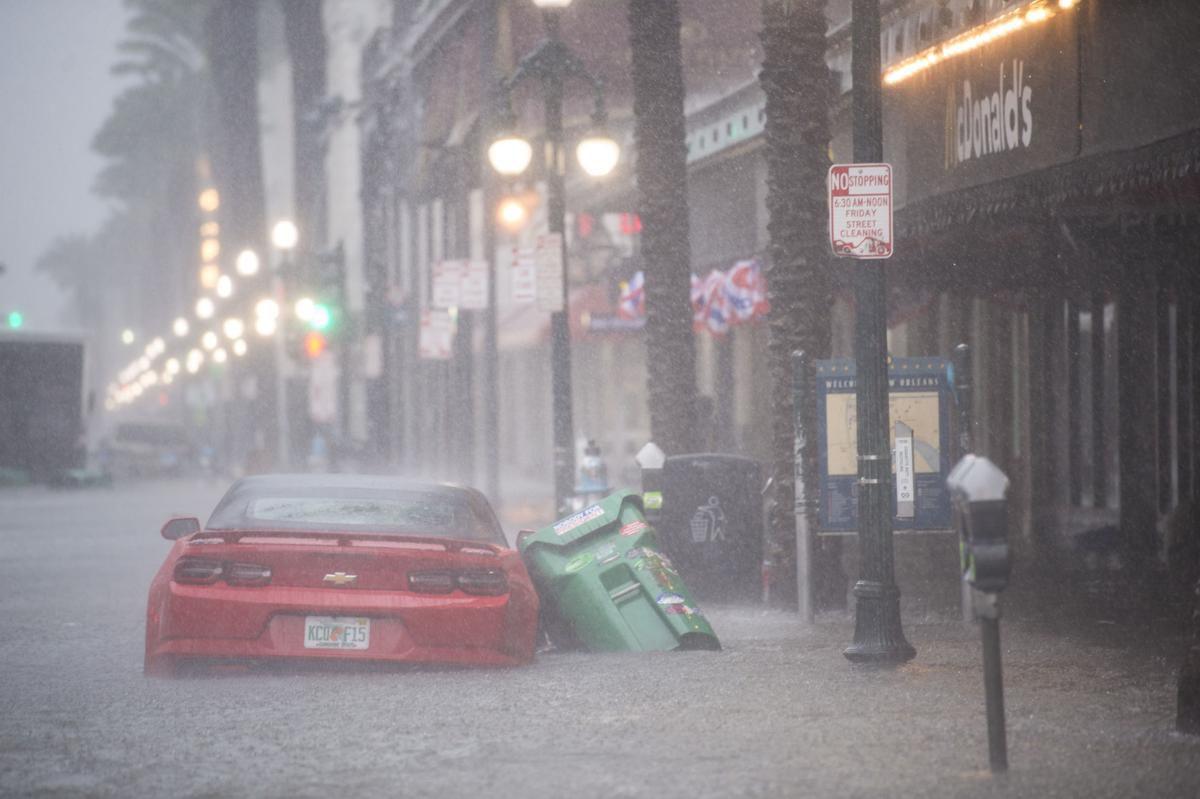 Area residents fill bags with sand in preparation for possible heavy rain event, at a sandbagging location at the BREC Fairgrounds at 16072 Airline Highway, Wednesday, July 10, 2019.

A potent weather system stirred in the Gulf of Mexico on Wednesday, developing into what's expected to be a Category 1 hurricane capable of dropping up to a foot or more of rain on the Baton Rouge area while passing through.

The National Hurricane Center will name the storm Barry if, as expected, its sustained winds reach 39 mph. Forecasters predict it will make landfall Saturday afternoon south of Lafayette, and raised a hurricane watch for the area between Cameron and the mouth of the Mississippi River.

“I am a nervous wreck because of this weather,” said Gayle Causey, who just this past winter returned to her Denham Springs home after backwater flooding inundated the region in 2016.

With the storm tracking west of Baton Rouge, the capital and river regions are on the stronger side of the storm — though no one is expecting a repeat from three years ago. There are concerns that a storm surge could force an already-high Mississippi River out of its banks south of New Orleans, but the river is low enough at Baton Rouge and Donaldsonville that levees should contain any surge this far north.

The National Weather Service also cautioned that tornadoes are possible in tropical systems near the coast. Several funnel clouds were reported Wednesday morning in New Orleans, and the city suffered through severe floods after more than 7 inches of rain fell in some areas.

Sherrie Mack is one of a group of people cautiously watching news updates, unsure how seriously to take the likely onslaught of a weather syst…

Gov. John Bel Edwards declared a state of emergency because of the approaching storm, as did Ascension Parish. Local governments and homeowners in the Baton Rouge region have gone into preparation mode from manning major pump stations for action and clearing culverts to setting up sand bag sites and barricades ahead of possible flooding as they watch for the storm's final path and rainfall intensity.

"From Watson north to Maurepas south, we're just all over the parish," said Sam Digirolamo, public works and planning and development director for Livingston Parish government.

The National Weather Service said Wednesday said the heaviest rainfall from the storm that would become Barry is expected to be south and west of Baton Rouge, yet lower-lying parts of the Baton Rouge area are often susceptible to backwater flooding in the days after the worst rain from a major storm. Much of the region's rainfall drains through the Amite River Basin, the region's major drainage outlet.

Ascension Parish Councilman Randy Clouatre, of St. Amant, said backwater flooding is always a worry in his parish, dealing first with the rain that falls in the parish's flood protection system and then the flooding that can follow from water draining out of the north. At times the parish sees a surge from Lake Maurepas to the south.

Whether backwater flooding ends up being a problem this time, as it was in August 2016, remains uncertain, some officials said.

"Any time you have storm surge and water backing up, there could be problems," said Fred Raiford, East Baton Rouge city-parish transportation and drainage director. "All of that will depend on how much storm surge there is, when it happens and how much rain falls. I just want people to be ready. That’s all we can expect at this point.”

As the forming storm sweeps northwest across the northern Gulf past southern Louisiana over the next few days, as much as 4 feet of surge water is expected to push up the Mississippi by Saturday in New Orleans.

With river levels in New Orleans at 16 feet after historically long high water on the river, the projected rise could mean some of the city's lowest protection levees and walls, which range between 20 feet and 22 feet, could be overcome.

"As you go farther north, the surge wave actually attenuates down, so it's not getting as much water as it would at New Orleans," Roth said.

During severe flooding in 2011, parish officials used sandbags, including giant HESCO baskets, on low sections of the river levee near Donaldsonville in the Aben area of Ascension Parish.

But Donald Henry, executive director of the Lafourche Basin Levee District, which manages the levees in that area, said river levels in Donaldsonville have hit 32 feet twice during the record high water already with no major problems. At the peak the National Weather Service is projecting, the levees will offer more 2.5 feet of protection in Donaldsonville.

For homeowners who made it through the August 2016 flood and the seemingly endless recovery that followed for many, the prospect of another flooding storm has prompted a mix of emotions and fears.

Causey left her home in 2016 on an inflatable air mattress that neighbors floated across a flooded parking lot and spent the next two years hopping from city to city as she tried to get home to her apartment.

She finally did so in February. But with the grim forecasts for the latest potential hurricane, Causey, who just had cataract surgery, was anxious Wednesday about what the future holds for her refurbished home in Denham Springs.

“If I were to have to leave this time, I’m not coming back,” Causey said. “I love living here, but I can’t deal with the anxiety anymore.”

Others have been worn down by recovery from the last flood and plan to just prepare for the worst.

Albany resident Sean Lutsch showed up at the town hall Monday night asking what was being done about ongoing drainage issues that leave his and many other homes flooded in heavy rains.

He flooded in 2016. This time he’s preparing important documents and go-bags if needed, but won’t be sandbagging.

“At this point, I am beyond hoping we don’t flood and am just expecting the next good rain to cause us to flood,” he said.

Now known as Potential Tropical Cyclone Two, the still-forming storm is projected to have a reasonable chance of bringing tropical storm force winds to New Orleans by Thursday night and the Baton Rouge and Lafayette areas Friday morning. The projection is used to identify a time by which people with a low tolerance for risk should have completed their storm preparations.

Michael Hill, a meteorologist with the National Weather Service in Slidell, said meteorologists believe 6-10 inches of rain will fall in the Baton Rouge area, though forecasts will be updated as the storm continues to form and move. He said the New Orleans area and much of the rest of southeast Louisiana are expected to see the same rainfall range. After the storm makes landfall, its center is expected to move north and pass east of Shreveport on Sunday afternoon.

In Ascension Parish, officials have manned pump stations that drain the east bank of the parish but have the system on standby awaiting the call to start. The parish government typically pumps down waterways in St. Amant, Gonzales and other lower reaches of eastern Ascension in advance of major storms to boost rainfall storage capacity.

In Sorrento, the pumps drain a large, man-made reservoir that collects rainfall from the town and push that water into a nearby bayou.

But parish officials said a prevailing winds out of the north and low water levels outside the parish protection system allowed them to drain area waterways naturally without have to run the pumps much at the Marvin J. Braud Pumping Station. The large seven-pump station in the McElroy Swamp can allow water to flow through it naturally when pumps are off and a key gate, designed to allow waterborne traffic to pass, is opened.

East Baton Rouge Parish emergency officials canceled an emergency preparedness event set for this weekend because of the risk that first responders would likely be working an actual emergency.

It's one of several public meetings that have been canceled because of the expected harsh weather.