Formosa Petrochemical Corp. announced in April 2018 that is has selected St. James Parish for a $9.4 billion chemical manufacturing complex. 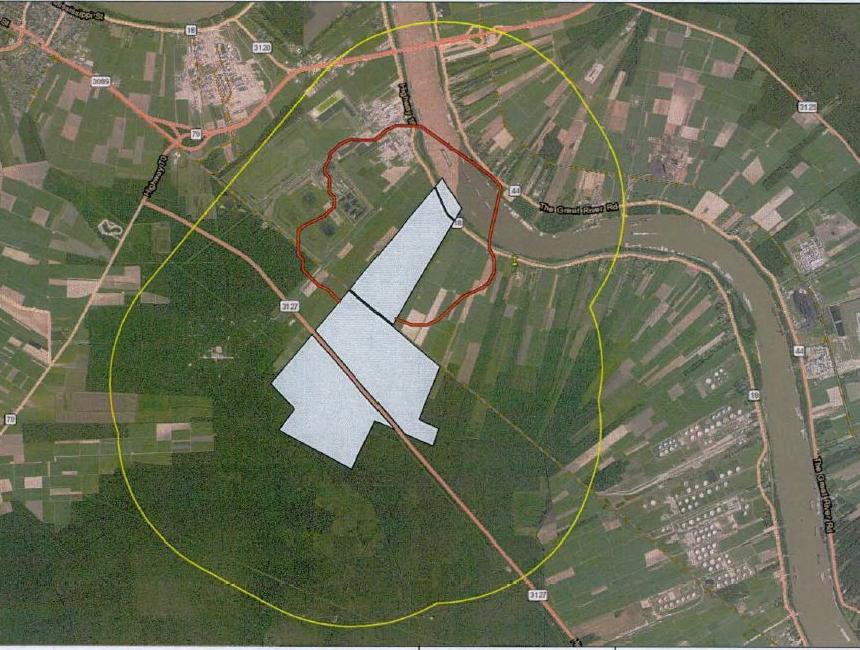 This air modeling map for a Formosa Plastics complex proposed in the Welcome area of St. James Parish shows carcinogenic ethylene oxide emissions would exceed a new federal guideline of 0.2 micrograms per meters cubed (inside red line) but not fall on populated areas. The east bank community of Union would be very close, however, to the line where air concentrations start to surpass the federal guideline. The U.S. Environmental Protection Agency said the new 0.2 guideline matches its minimum acceptable lifetime cancer risk level for air pollution, though state regulators dispute it. The yellow line marks a distance of two miles from Formosa's site. 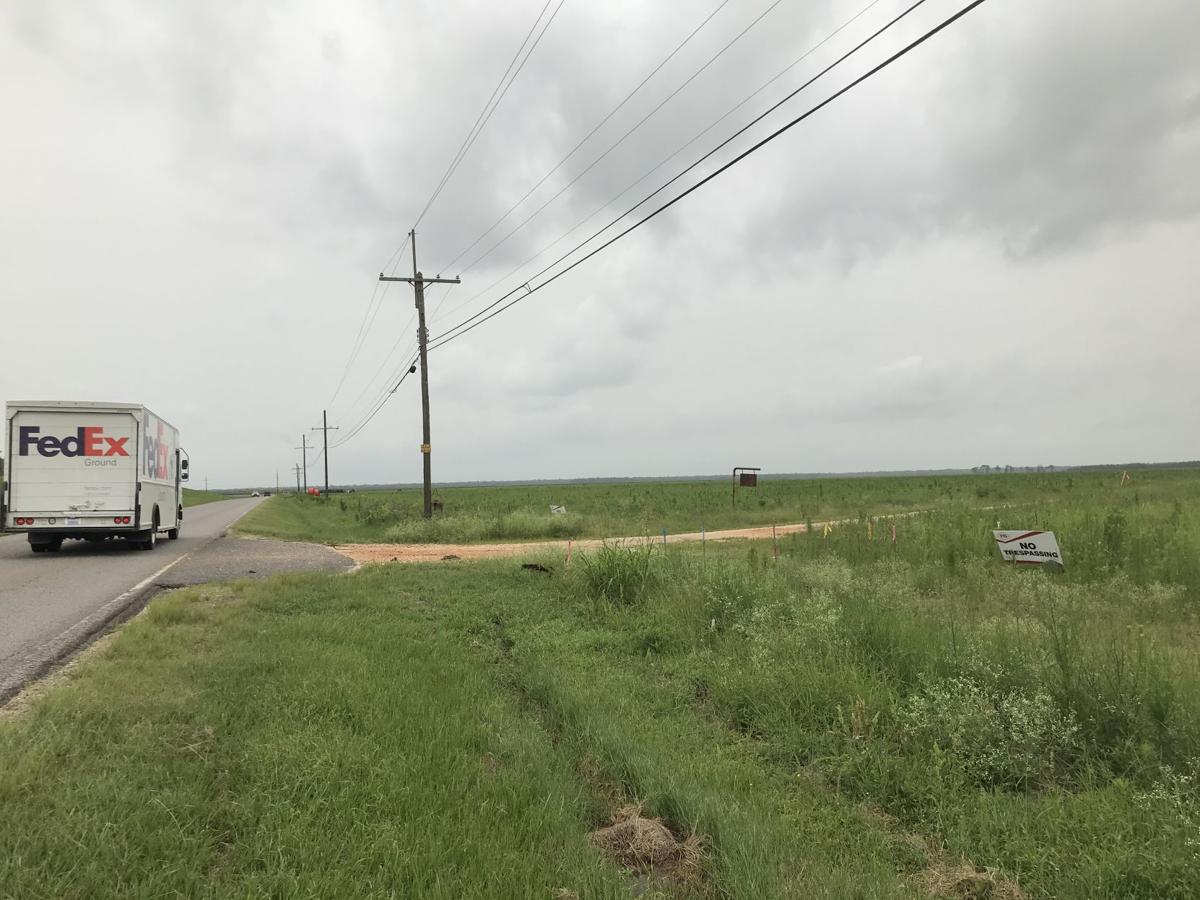 Formosa Petrochemical Corp. announced in April 2018 that is has selected St. James Parish for a $9.4 billion chemical manufacturing complex.

This air modeling map for a Formosa Plastics complex proposed in the Welcome area of St. James Parish shows carcinogenic ethylene oxide emissions would exceed a new federal guideline of 0.2 micrograms per meters cubed (inside red line) but not fall on populated areas. The east bank community of Union would be very close, however, to the line where air concentrations start to surpass the federal guideline. The U.S. Environmental Protection Agency said the new 0.2 guideline matches its minimum acceptable lifetime cancer risk level for air pollution, though state regulators dispute it. The yellow line marks a distance of two miles from Formosa's site.

United Nations observers said this week that further industrialization in the Mississippi River corridor between Baton Rouge and New Orleans is a form of "environmental racism" against the area's Black residents and must be stopped despite past failures by the state and federal governments to halt its continued expansion.

The communique from the UN's special rapporteur on contemporary racism and other officials specifically identifies, as an example, the $9.4 billion Formosa Plastics complex that would be built near the graves of suspected former slaves. The complex is proposed for northwestern St. James Parish near predominantly African American communities.

"This form of environmental racism poses serious and disproportionate threats to the enjoyment of several human rights of its largely African American residents, including the right to equality and non-discrimination, the right to life, the right to health, right to an adequate standard of living and cultural rights," E. Tendayi Achiume, the special rapporteur, and other U.N. staffers said in a joint statement issued Tuesday evening.

Formosa said it was building on land recommended to it by St. James Parish officials for industrial development. Activists have challenged the way the parish selected the site.

The UN panel — made up of people the organization deems to be experts on the environment, race and human rights — contend federal environmental regulations have failed to protect people residing in an area they called "Cancer Alley."

The UN statement also tried to tie the river region's pre-Civil War history, when enslaved Black people were used as the primary labor force for an agricultural economy, to the industrial operations that have slowly filled the lands near where those slaves' progeny now live.

"Originally called Plantation Country where enslaved Africans were forced to labour, the petrochemical corridor along the lower Mississippi River has not only polluted the surrounding water and air, but also subjected its mostly African American residents to cancer, respiratory diseases and other adverse health effects," the UN statement says.

The new UN statement came after law students in Loyola Law School's Human Rights Advocacy Project in New Orleans developed a nine-page appeal to Achiume for a human rights investigation during the fall semester. Achiume said visiting the site as part of a probe would require an invitation from the U.S. government.

Achiume, as a special rapporteur for the UN, is part of the Special Procedures for UN Human Rights system. It includes independent and voluntary fact-finders who are not employees of the UN.

Achiume, who is a law professor at UCLA, was not immediately available by email Wednesday.

A spokesperson for FG LA LLC, the Formosa subsidiary behind the proposed plastics complex, said the company located in the area because it was on a site the Parish Council had previously designated for industry and came after a rigorous selection process conducted with the Louisiana Department of Economic Development and parish government.

The facility design uses advanced emissions controls and other "extensive measures to protect the environment," and FG plans "to keep pace with technological advances that may enable the company to further strengthen those measures," said Janile Parks, a company spokesperson.

She and a state chemical industry trade group also pushed back against the concept of Cancer Alley, saying there "is no scientific proof that cancer rates" in the river corridor, in St. James Parish or the northwestern area of St. James where Formosa would be built, are higher due to industrial activity.

"In fact, cancer rates and deaths are lower than, or there is no significant difference from, the rest of the state," Parks said. "Reports issued by the Louisiana Tumor Registry, the state’s cancer data aggregator, clearly establish this point. There is no 'Cancer Alley.'"

Louisiana industry groups have often made this point through the years, citing the registry's data. But environmentalists have argued that incidences, which are subject to a variety of factors, not just air pollution, are not the same as cancer risk.

Louisiana petrochemical contractors look for 'the next wave' of construction boom

The broadside from the UN represents a direct challenge to one of Louisiana's bread-and-butter economic engines at a time when the Formosa project and state and federal regulators have faced backlash from local and environmental groups.

"We do not know if this group found evidence of such actions, and if they did, the statement they released does not share that information with the general public," he said.

Our Views: A new lawsuit against jobs in Louisiana's petrochemical complex

In a controversial “1619 Project,” writers from The New York Times did an extensive series of articles “reframing American history” based on t…

The Formosa complex would be built in two phases along the Mississippi River and has been seen as a big economic development win for the state, bringing 1,200 permanent jobs, thousands more temporary construction jobs and millions of dollars in sales and property tax revenue for local and state governments. Gov. John Bel Edwards and local officials support the project.

But environmental groups argue it would be major source of toxic air pollutants and greenhouse gas emissions in a region where questions about the fairness and justice of placing another new polluting complex near Black communities have often been raised.

The UN statement asserted that the Formosa complex would be one of the largest plastics facilities in the world. It claims the facility would double cancer risks for residents in the area and contribute to greenhouse gas emissions in St. James that would "exceed those of 113 countries."

The St. James Parish Council granted a key land use approval for the project at the end of 2018, but activists have challenged the complex's air permit in state court and wetlands permit in federal court.

Both challenges have, in part, raised environmental justice concerns that have forced delays.

A state district judge sent critical air permits for a $9.4 billion Formosa Plastics complex back to state environmental regulators so they ca…

The Formosa complex will produce the raw materials for a variety of plastics and has been permitted to emit more than 800 tons of toxic pollutants annually: nearly 6,500 tons of criteria pollutants known to cause ground-level ozone and respiratory ailments, and more than 13.6 million tons of greenhouse gases, DEQ says.

In 2019, a joint investigation by The Advocate, Times-Picayune and ProPublica using U.S. Environmental Protection Agency modeling data found Formosa and other new industrial proposals in St. James since 2015 posed an acute impact on predominantly poor and Black river communities, though white communities hardly escape it.

The U.S. Army Corps of Engineers plans to temporarily suspend a permit critical for the construction of a $9.4 billion chemical complex propos…

The investigation found that emissions from Formosa alone would mean that residents in Convent, across the river from Formosa, would face double the toxic levels of cancer-causing chemicals they currently do, while those in the west bank community of St. James would see those levels triple.

The UN officials made a similar point about the increase in toxic emissions expected from Formosa, though they cited different EPA risk data.

"The construction of the new petrochemical complexes will exacerbate the environmental pollution and the disproportionate adverse effect on the rights to life, to an adequate standard of living and the right to health of African American communities," they said.

In DEQ's air permit decision for Formosa, however, the agency challenged heavy reliance on federal modeling data used in the newspaper analysis, saying it was simplified and represented a worst-case scenario. DEQ says it did extra investigation, considered actual conditions and found the plant would not adversely affect human health or the environment.

DEQ plans to appeal White's ruling ordering DEQ to take a closer look at its own environmental justice analysis. A DEQ spokesperson declined to comment on the UN statement Wednesday, citing the Formosa litigation.

Parks, the FG spokesperson, said that "any claim that FG will greatly increase 'toxic emissions' in the area is a misrepresentation and inaccurate."

FG's own air modeling has found, she said, that ambient air emissions once the plant starts operating would "meet the lower health risk factor suggested by the National Air Toxics Assessment." That is a 1-in-10,000 chance that a person would get cancer from breathing air in the area over a lifetime.

Jeanne M. Woods, a now-retired Loyola law professor who led the law class project last semester that resulted in the appeal to Achiume, said her students for the past several years have looked at Louisiana and its environment. They decided last year to seek out the UN as a way to bring international attention to the region.

A federal judge in Washington, D.C., has thrown out a lawsuit challenging the wetlands permit for the $9.4 billion Formosa Plastics complex pr…