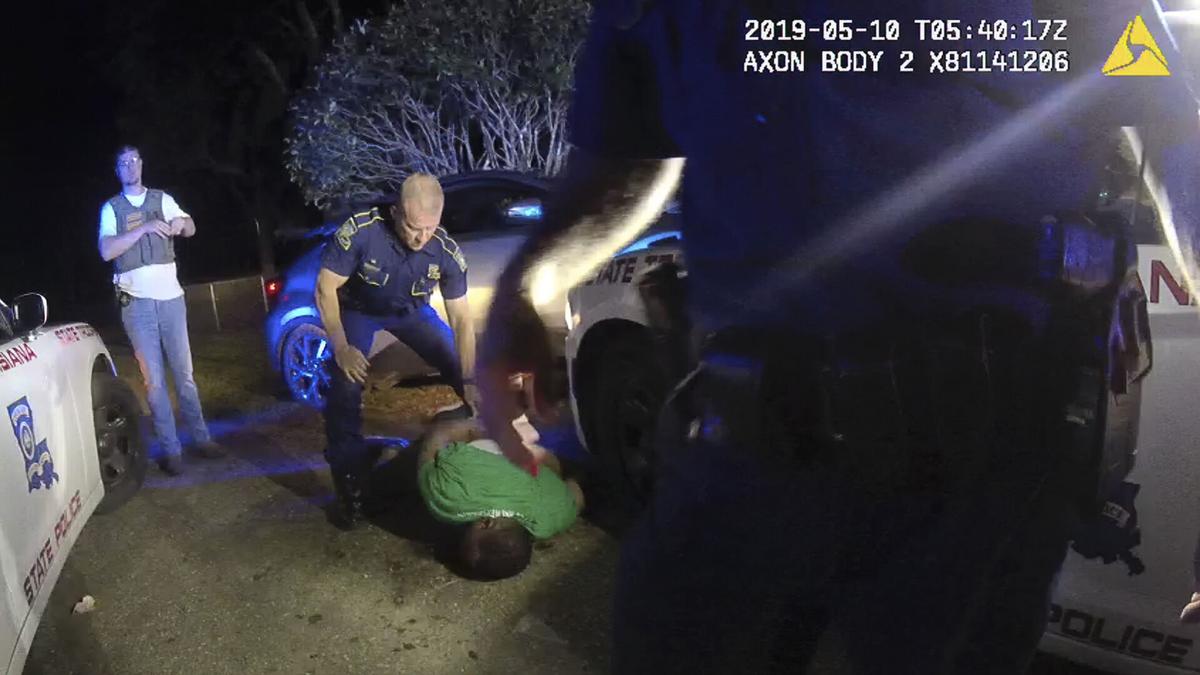 This image from video from Louisiana state trooper Lt. John Clary's body-worn camera shows trooper Kory York standing over Ronald Greene on his stomach on May 10, 2019, outside of Monroe, La. 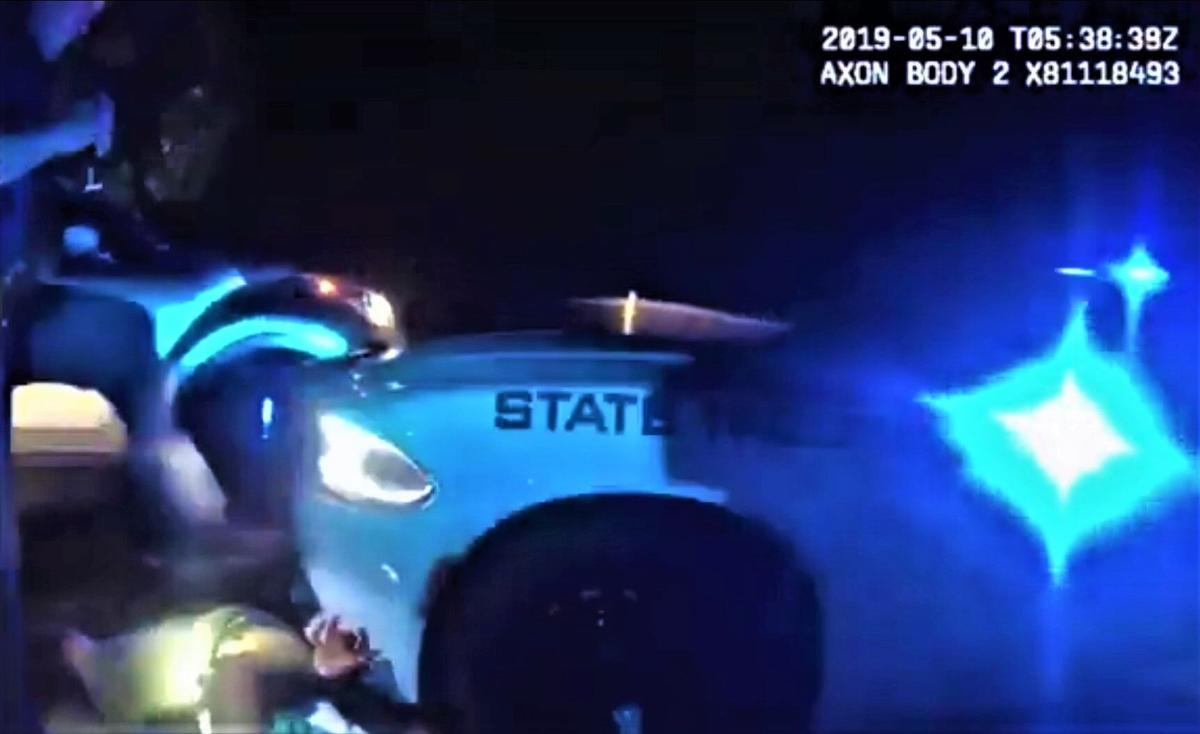 This image from video from Louisiana state trooper Lt. John Clary's body-worn camera shows trooper Kory York standing over Ronald Greene on his stomach on May 10, 2019, outside of Monroe, La.

As Ronald Greene lay gashed and spitting up blood on a dark Union Parish road, he took his last breaths surrounded by a group of Louisiana state troopers who looked nothing like him.

The troopers seen repeatedly tasing, beating and dragging a handcuffed Greene on May 10, 2019 — their actions shown in bodycam footage State Police released grudgingly on Friday after a leak to the Associated Press — were all White.

Odds of that racial composition are high in Troop F, the Monroe-based division at the center of a metastasizing scandal over the violent arrest that left Greene dead, followed by what his family calls a lengthy coverup. Greene's death has spawned accusations of racist policing, claims that have gained steam amid other controversial uses of force and broader questions about the diversity of Louisiana's premier police agency.

The Louisiana State Police is divided into nine units, known as troops. Of them, Troop F is among the whitest, though it patrols a diverse region of a dozen northeast Louisiana parishes.

Of the 66 Troop F members, just six are Black, records show. The area they patrol is about 40% African American.

The Troop F roster is 86% White and 9% Black. That ties it with Alexandria-based Troop E — which patrols a region with a much larger White population — for the lowest Black representation among the nine troops. The entire agency, meanwhile, has long come under fire for its lack of diversity: Only 17% of Louisiana State Police personnel assigned to the nine troops are Black, compared to about a third of the state population.

In addition to the Greene investigation, White troopers at Troop F are the subject of several other pending civil rights complaints that allege wanton violence against Black people. Some of the same troopers are named in multiple suits.

Col. Lamar Davis, who took over as State Police superintendent in October just as the scandal was intensifying, suggested at a news conference Friday that the allegations reflect a cultural problem years in the making inside Troop F, though he also aimed to limit responsibility to some "bad actors."

'This is God's plan:' New State Police head surprised and humbled to be leading agency

Davis, who is Black, said he's trying to diversify the troop.

"We didn't get there overnight," he said. "It's going to take some time for us to continue building that culture to where we want it — public service, courtesy and morals."

Davis said changing the Troop F commander marked an important first step. Eric Cuenca was appointed this year to lead the troop, according to the State Police website.

He replaced the previous commander, Capt. John Peters, a career state policeman whose tenure spanned the Greene incident and several others when troopers allegedly abused Black suspects during traffic stops.

"I think by changing that leadership," he said, "it's really helped us to identify the issues we had."

Like Peters, who arrived after the first troopers began to fight and tase Greene, most of the troopers identified at the scene of his death were Troop F veterans. Many signed on to State Police service after stretches at local law enforcement agencies in the Monroe area.

Chris Hollingsworth, who died at age 46 last September in a single-car crash shortly after learning he was being fired for his role in Greene's death, had been with State Police for 18 years, all while living in Ouachita Parish.

Master Trooper Kory York, seen briefly dragging Greene's shackled body across the ground, was a veteran, hired by the State Police in 2003 after nine years with the Ouachita Parish Sheriff's Office and West Monroe police.

Sgt. Floyd McElroy, who is Black but could not be identified in the videos released on Friday, started in 1992 with State Police after working for five years for the Monroe Police Department. State records show McElroy left State Police in June 2019, a month after Greene's death, but returned part-time last August.

Dakota DeMoss, whose body-worn camera captured much of the incident, was the newest among them, in his late 20s and hired to the force in 2016.

With his own ascent to lead State Police, Davis replaced Col. Kevin Reeves, who spent decades at Troop F, rising to troop commander before Gov. John Bel Edwards tapped him in 2017 to replace Mike Edmonson after a series of scandals at the agency.

Reeves' close ties to Troop F have raised questions about whether his administration was complicit in what Greene family attorney Ron Haley called a clear attempt to hide the true circumstances of the death.

Greene's family has said they were told he died from a car crash after a chase, while the agency withheld key records.

"They've hid everything," Haley said. "They had to get their directions from headquarters, and common sense can tell you that. They couldn't just cover it up without someone in headquarters knowing. The guys running headquarters were Troop F guys."

"For it only to be 9 percent, at some point in the history of Troop F, diversity was not important," said Jackson, who saw a culture problem statewide. "I believe that in every troop around this nation, whether it be state trooper or sheriff or local, we have some seriously bad actors. I don't think Troop F is immune from that."

Jackson said she eagerly awaited the results of a federal investigation into Greene's death, and discipline for those who sought to hide it. In her eyes, the videos showed inhumanity.

"Regardless of any violations he had, drugs in his system or not, once the public was not in harm's way, you still had an individual whose life is in your hands, sitting hurt, and you caused more damage letting him sit face down, shackled, like a dog in the dirt," she said. "And that is inexcusable."

Reeves stepped down as superintendent not long after news of the Greene investigation came to light last fall. His second-in-command, Bob Brown, whom he brought over from Troop F, retired around the same time.

Both Reeves and Brown had sons who worked in Troop F, though neither son is currently patrolling the northeast portion of the state.

Jacob Brown also worked in Troop F after four years at the Ouachita Parish Sheriff's Office — until he resigned from State Police in March after being arrested three times and accused of using excessive force during a series of encounters in 2019 and 2020.

A Louisiana state police trooper who was recently arrested in three separate excessive force incidents resigned from the agency this week.

Davis, who has no known ties to Troop F, represents another new chapter and changing course at State Police. He spent most of his career in the Baton Rouge area before becoming the fourth African American superintendent in the history of the agency.

In addition to changing the leadership at Troop F, Davis pledged to increase diversity among high-ranking troopers and ramp up diversity training throughout the agency. That includes implicit bias and "duty to intervene" training, Davis said during the Friday news conference.

He also said the agency has banned the use of chokeholds and "impact weapons" to the head except in situations where lethal force is authorized. The impact weapons ban likely applies to flashlights, which troopers were using to force suspects into compliance, according to attorneys representing the Greene family and another man alleging abuse.

While emphasizing the clear need for change, Davis also asked people to remember the many upstanding State Police troopers who serve the public every day, even in Troop F.

"We have some great troopers at Troop F," he said. "Oftentimes when we have events like this with some bad actors, we cast everybody into a net without taking into consideration the other troopers who are going out there and really affecting public service."

"These issues are so deeply ingrained — this culture of doing whatever the hell they wanted to without any regard for human life," he said. "People want to know how far the cover up goes."

James also called for additional policy changes, questioning why Troop F was allowed to investigate itself after Greene's death.

"It's not an overnight fix," he said. "I want to trust that Col. Davis is changing things. I want to give him the time to implement real reform."

NEW ORLEANS (AP) — In perhaps the strongest evidence yet of an attempted cover-up in the deadly 2019 arrest of Ronald Greene, the ranking Loui…