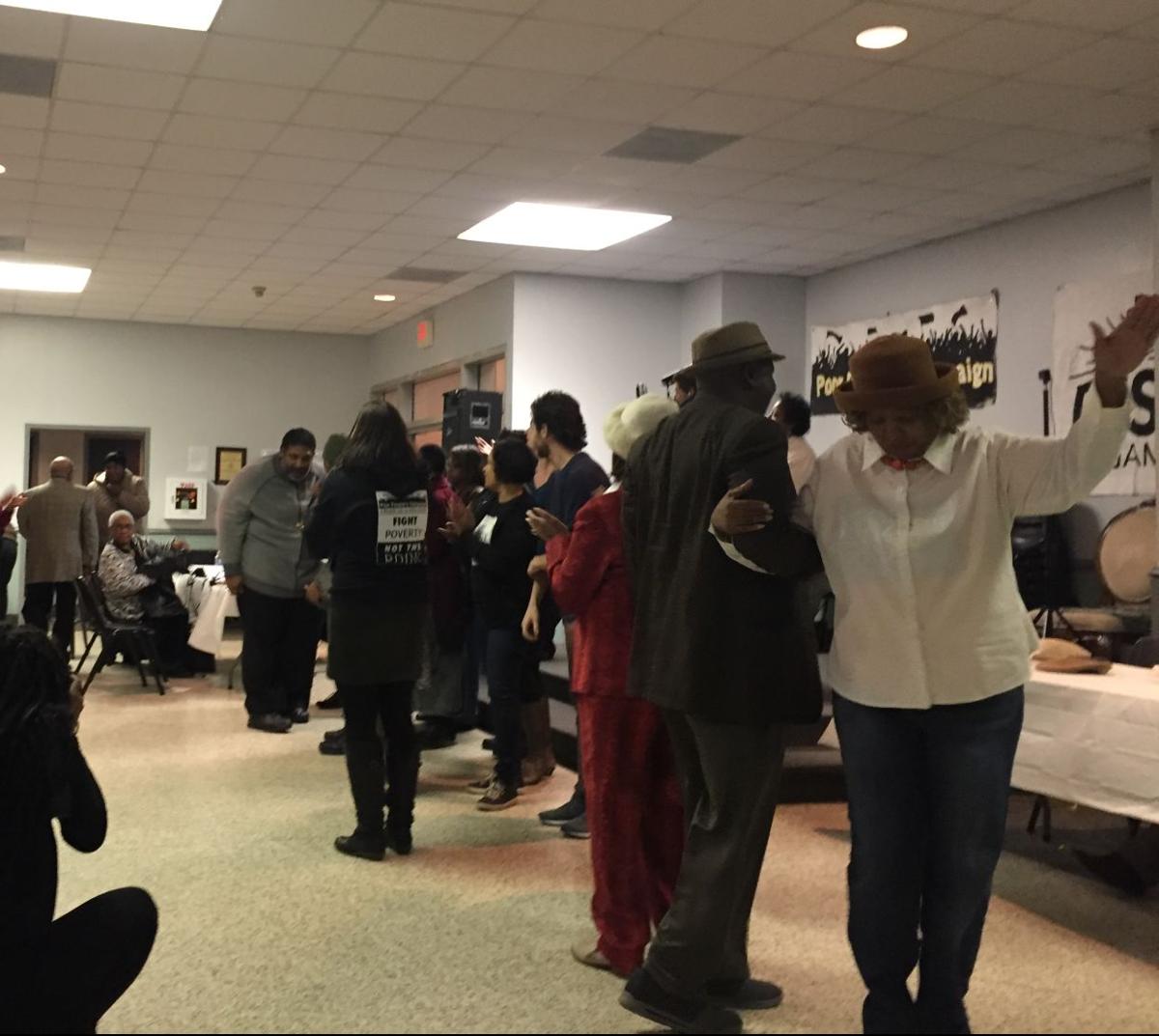 The Rev. Dr. William Barber, co-chair of the Poor People’s Campaign, background left, sings and dances with others Wednesday night at the St. James Parish West Bank Reception Hall in Vacherie during a rally over industrial growth in St. James Parish.

The Rev. Dr. William Barber, co-chair of the Poor People’s Campaign, background left, sings and dances with others Wednesday night at the St. James Parish West Bank Reception Hall in Vacherie during a rally over industrial growth in St. James Parish.

The pleas came a week after a huge Formosa Chemical complex planned for the Welcome area received important local backing and as state regulators remained on emergency footing over instability at an industrial waste pile in Convent.

Those attending the rally at the West Bank Reception Hall in Vacherie joined in Gospel songs, dined on jambalaya and listened to a string of fiery speeches demanding justice for the poor and an end to what they described as the petrochemical industry’s grip on the state.

He told the crowd the lives of their children are being threatened, and that "if you stand up, God's going to send you help" — remarks that drew shouts and applause.

The Poor People's Campaign showed up for the event organized by groups fighting the Formosa plant and other industrial projects in the region, such as the Bayou Bridge Pipeline being built through the west bank of St. James Parish.

The plastics facility proposed by an affiliate of Formosa would be built on 2,400 acres of cane field and wetlands in the Welcome area along River Road in the northwest corner of the parish.

VACHERIE — Formosa Chemical's plans for a $9.4 billion plant in a poor, rural section of St. James Parish has cleared a major hurdle although …

Seen as a major economic development boost by state and parish elected leaders, the Formosa facility would bring 1,200 permanent jobs, more than 8,000 construction jobs and hundreds of millions of dollars in local and state tax revenue, state and local authorities said.

The St. James Parish Council granted an important land use approval Jan. 23 that includes local training, hiring and other requirements.

Formosa officials have said its facility will have the latest in pollution controls and its air emissions won't worsen the parish's air quality below the state's air ambient standards.

VACHERIE — A $9.4 billion Formosa Petrochemical plant that economic development officials dubbed "the big one" earlier this year has won condi…

In addition to voice health and environmental concerns about the Formosa project and other industrial projects, several speakers at Wednesday's rally pointed to more recent news of the potential threat posed by a slowly shifting wall of  phosphogypsum that could send acidic water spilling out of Mosaic's Uncle Sam plant in Convent.

Sharon Lavigne, whose faith-based group Rise St. James has fought the Formosa project, said local officials didn't seek out west bank residents' views when the parish land use plan set her area aside for industry. She also criticized state regulators for not being tougher on industry.

"Our state agencies are rubber-stamping every permit that comes across their desk," Lavigne said. "When we call the Department of Environmental Quality about a terrible smell in the air, they come out three days later and tell us they don't smell anything."

The developer of a massive methanol production plant in St. James Parish that was announced in 2013 but not built said it is trying to partner…

St. James officials have said the land use plan was developed through a multiyear process that involved multiple public meetings.

Lavigne said she expects her group to pursue more rallies like the one Tuesday night and seek out more help from area churches.

"We're going to try to educate the people on what these chemical plants are doing to us," she said.

What is gypsum? What you should know about this giant wall, its possible collapse in St. James

A potential environmental disaster might be looming in St. James Parish.