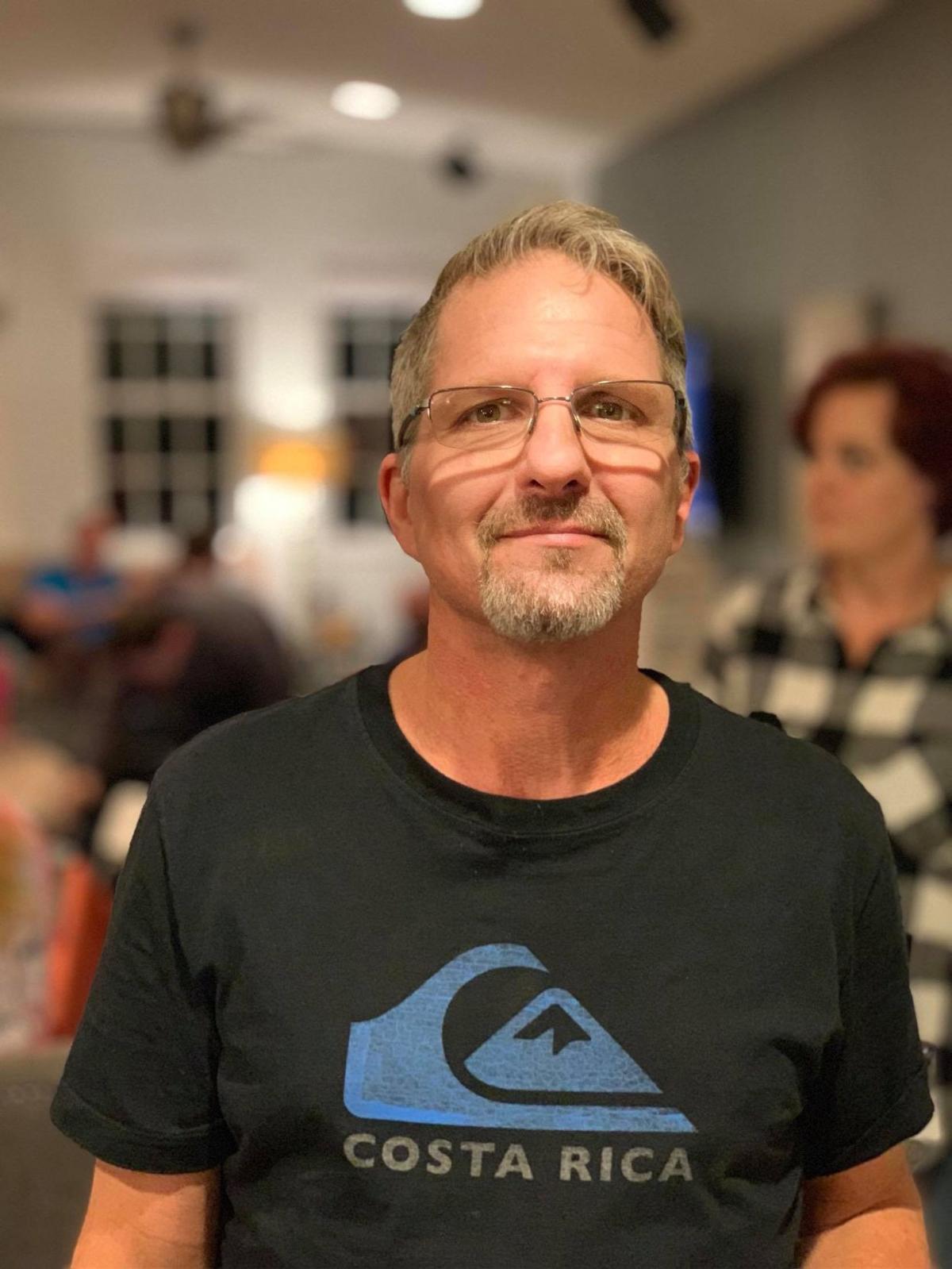 Charles Bishop is one of at least 30 people who say that a former Baton Rouge priest, Christopher Springer, sexually abused them growing up. Bishop, now 51, is soon headed to Costa Rica to work as a missionary after years of battling addiction that he said was triggered by the abuse. Springer is expected to be included when the Diocese of Baton Rouge soon releases a list of priests credibly accused of sexual abuse. 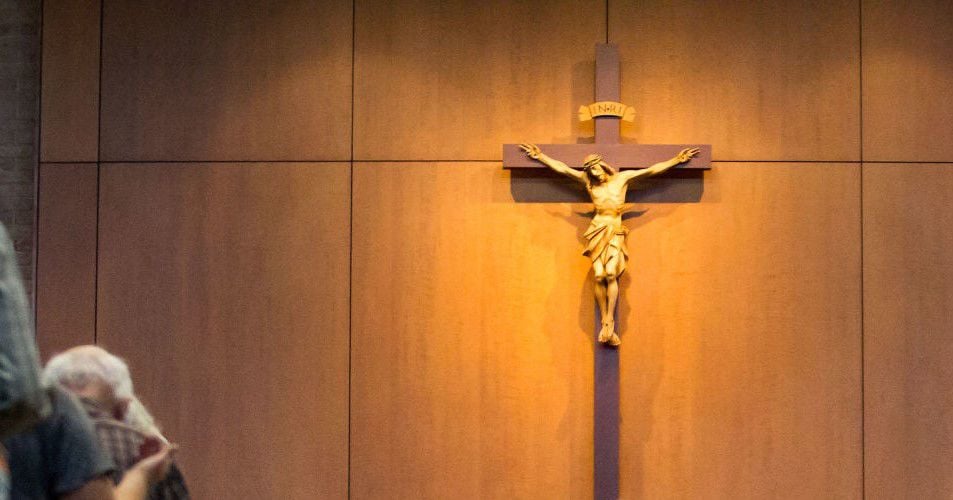 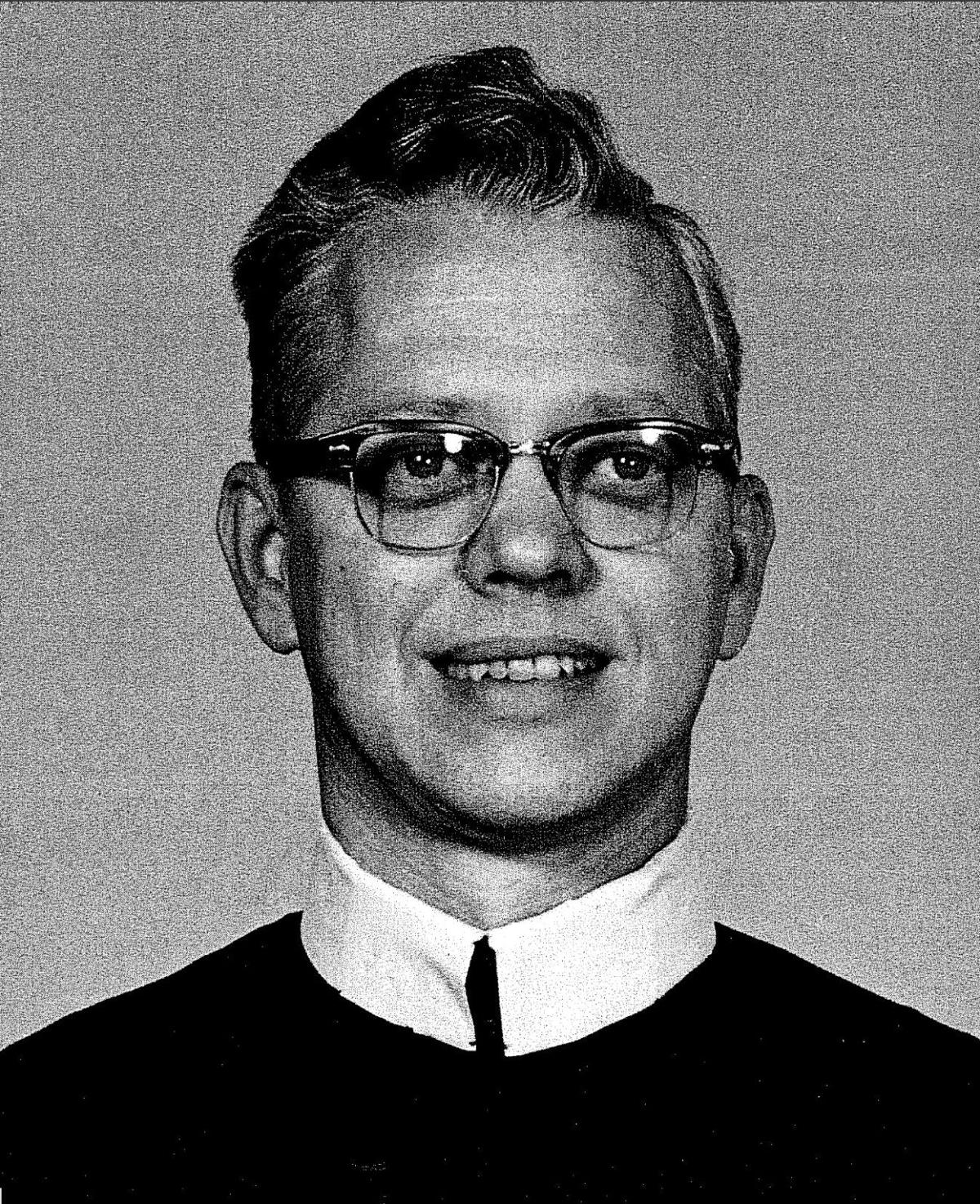 The Rev. Christopher Springer as a Redemptorists priest, circa 1960s. At least 30 people filed lawsuits that claimed Springer sexually abused them when he was a priest. He worked at churches across Baton Rouge in the 1970s, and he was removed from ministry in the mid-1980s.

Advocate file photo of the plate on the informational sign which was donated in 1982 by the ushers in front of St. Pius X Church in Baton Rouge. 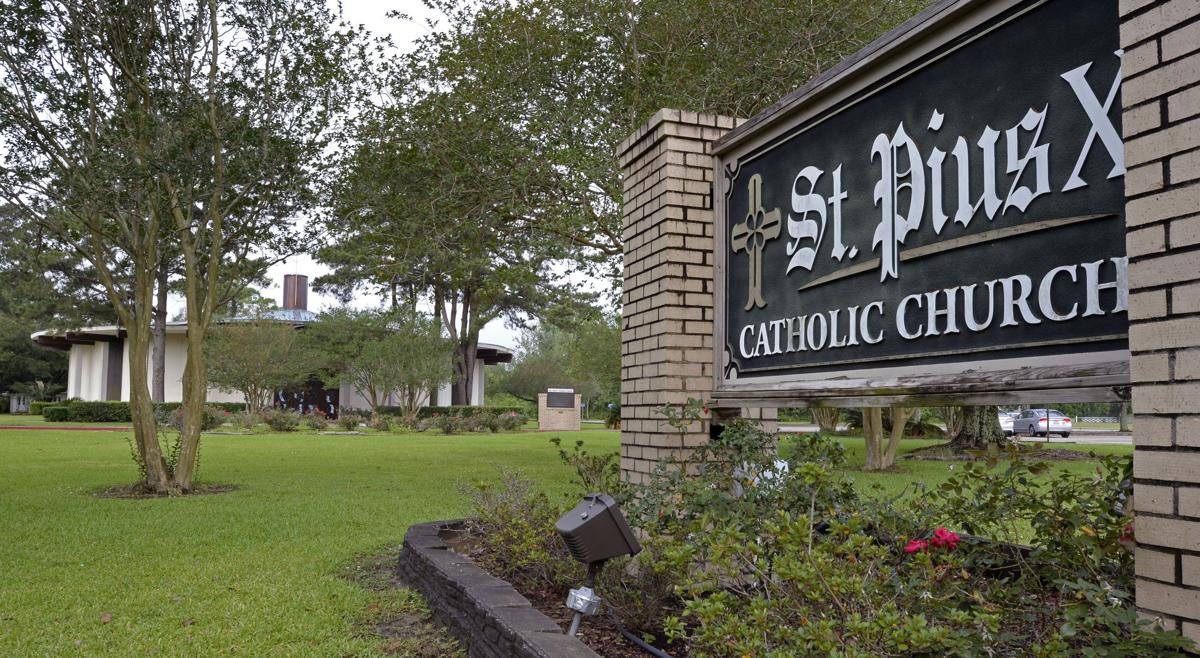 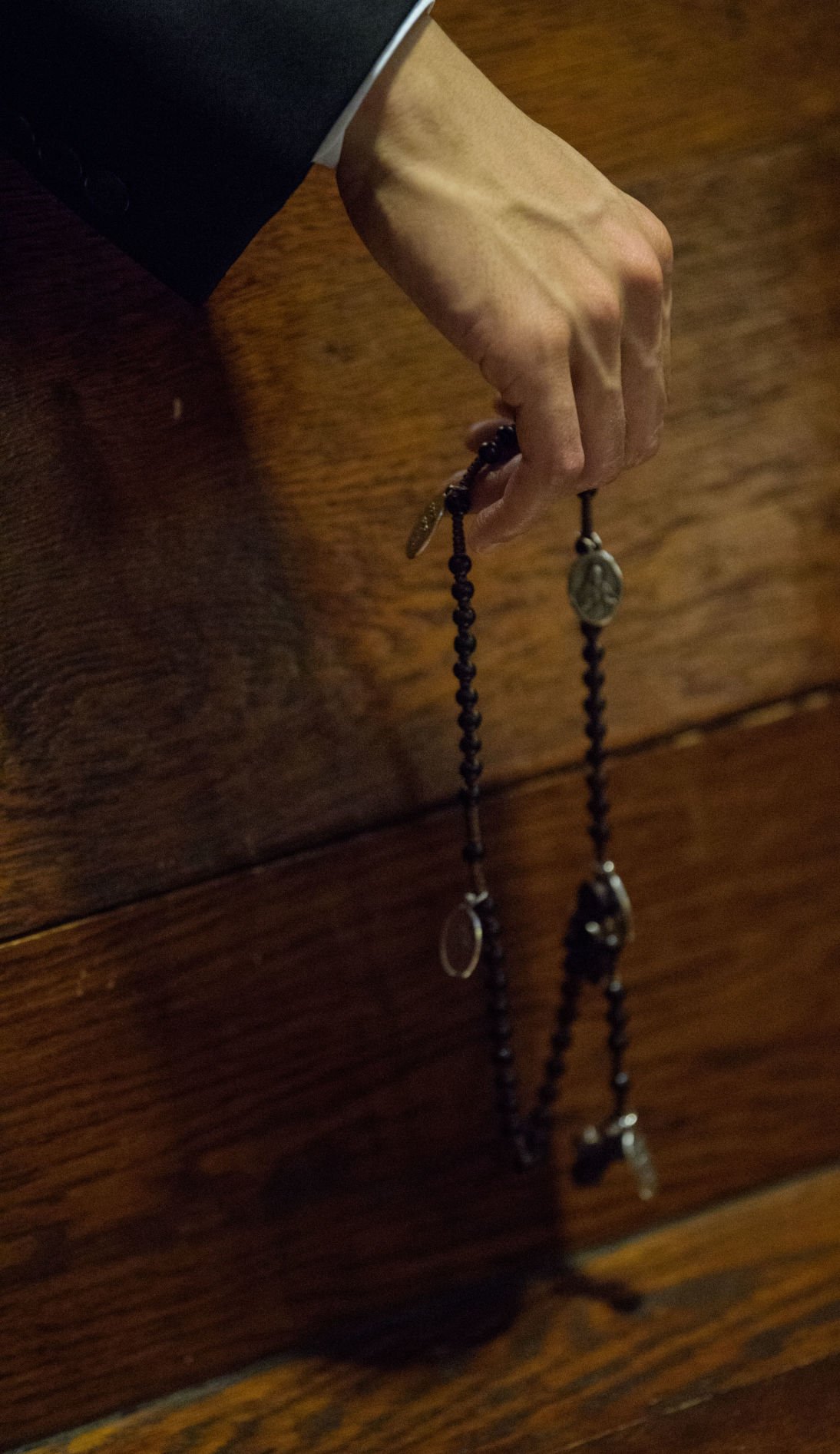 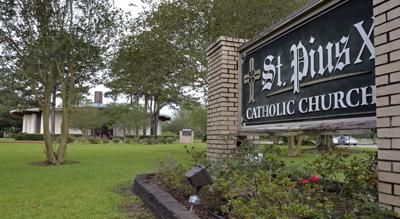 Charles Bishop is one of at least 30 people who say that a former Baton Rouge priest, Christopher Springer, sexually abused them growing up. Bishop, now 51, is soon headed to Costa Rica to work as a missionary after years of battling addiction that he said was triggered by the abuse. Springer is expected to be included when the Diocese of Baton Rouge soon releases a list of priests credibly accused of sexual abuse.

Advocate file photo of the plate on the informational sign which was donated in 1982 by the ushers in front of St. Pius X Church in Baton Rouge.

The second time Charles Bishop served as an altar boy at St. Pius X in Baton Rouge, he started to cry.

No older than 10 at the time, Bishop was worried because an older boy meant to show him the ropes was a no-show. But the kindly priest, Father Christopher Springer, who had white hair and glasses, stooped down and comforted him.

Springer promised to take him out to dinner after Mass, and, even better, told him he could bring a friend, too. Bishop perked up.

Later that day, Springer brought them to a trailer in Clinton.

So began a period of at least three years in the late 1970s and early 1980s when, Bishop says, Springer repeatedly molested him and other young boys. At least 30 people have filed lawsuits alleging abuse by Springer; their attorney said the ex-priest’s true victim count is likely far higher.

Springer is believed to still be alive, in his 90s, but The Advocate could not reach him for this story. When the Diocese of Baton Rouge on Thursday releases the names of priests who have been credibly accused of sexual abuse, Springer’s name is expected to be on it. He may have been the diocese’s most prolific abuser.

A Baton Rouge bishop who sexually abused young men while he threatened to excommunicate Catholics who disobeyed church doctrine.

"I am convinced that bringing more of the facts of this tragedy into the light will be a help to the victims of abuse and the beginning, I hope, of re-establishing trust where it has been lost," Baton Rouge Bishop Michael Duca wrote in a letter about releasing the list.

For Bishop, now 51, Springer’s abuse set off decades of addiction to sex and drugs. He credits God with turning his life around. And now, he wishes the same for Springer.

Bishop grew up in Baton Rouge. His parents divorced when he was young, and he said he was abused by a relative and a family friend as a child as well. Abuse by the priest became a regular occurrence in the St. Pius X church rectory and at Springer’s camp in Clinton.

The abuse stopped once Bishop reached his early teens, and he remembered Springer once telling his mother that after boys reached puberty, he no longer wanted them at his place. Bishop could not bear to tell his mom about the abuse, so he kept it a secret for years afterward.

He moved to Florida when he was 20, and after a divorce, he spiraled.

He started to use household chemicals, like PAM cooking spray, as inhalants, looking for any way to get high. He booked back-to-back sessions with a psychologist, got a doctor to prescribe him antidepressants. The spiral continued into his early 40s. He couldn’t forgive himself for allowing the abuse to happen.

Cristoff Joseph Springer, later identified as Christopher Springer, was ordained as a Redemptorist priest in 1952, in Wisconsin. He wrote in a 2009 affidavit that when he was 12 or 13, he had been molested by a Redemptorist priest who taught him Latin. That priest died in 1955, and a spokeswoman for the Redemptorist order said officials investigated Springer’s accusation, but they could find no other abuse allegations against the teacher.

Blakeview: How the Redemptorists came to New Orleans

The religious order was founded in 1732

Springer knew sign language, often worked in deaf communities and would even sign at Mass. In 1973, he left the Redemptorists and became a diocesan priest in Baton Rouge. It’s unclear why he made the switch.

Members of Springer’s religious community had not reported any sign that he might have been involved in sexual misconduct before he left the Redemptorists, said Kristine Stremel, the public and community affairs director for the order’s Denver province. Springer was affiliated with the Redemptorists’ New Orleans vice province, which was later consolidated with Denver. No allegations were made against him before he left, she said.

“In fact, his personnel file includes letters protesting his transfers from local communities,” she added.

Later lawsuits, though, allege abuse that overlapped with Springer’s time as a Redemptorist. For instance, one suit accuses Springer of abusing a young boy at Our Lady of Perpetual Help in Corpus Christi, Texas between 1969 and 1972.

How a priest accused of abuse preyed on the deaf community in Baton Rouge, New Orleans

“Everywhere he went, he left a trail of victims,” said Felecia Peavy, a Houston attorney who represented at least 30 plaintiffs against him.

Once Springer came to Baton Rouge, he had several assignments, including St. Pius X, St. Mary’s of False River, Immaculate Heart of Mary in Maringouin, Our Lady of Perpetual Help in Jackson, Our Lady of the Assumption in Clinton, and St. John the Evangelist in Plaquemine. St. Pius X closed in 2017.

Springer was eloquent and adept at getting parents to view him as an authority figure, lawsuits say. One Texas couple he befriended was even trying to help him to develop a boys camp in 1981 in the Baton Rouge area — until their son told them Springer had molested him a decade earlier.

“He was quite the friend of the family, the helper, the babysitter,” Peavy said. “He was whatever you needed him to be.”

Bishop said he decided to join the lawsuits because he wanted to get help. The diocese reached confidential settlements with him, and other court files about Springer's abuse are sealed. The Redemptorists also said they have provided Springer’s victims financial compensation, counseling and other assistance.

But Peavy said the settlements were an uphill battle, and that the Diocese of Baton Rouge wanted to prevail against the allegations “by any means necessary.”

“The Diocese of Baton Rouge was a monster,” Peavy said. “They were a bigger monster than Springer, in my opinion. They protected him from criminal prosecution; they protected themselves from civil retributions.”

The diocese declined to respond to Peavy's characterizations. Duca wrote in his letter that it is important to understand the depth of sadness and shame in the diocese's history for healing to take place.

Peavy said one victory came in 2009, when she and a victim visited Springer in Pearl River and had him sign an affidavit. In the sworn statement, Springer said he had met with then-Baton Rouge Bishop Stanley Ott in 1984, and Ott had recommended he go to a facility for troubled priests in Florida. Springer wrote that he wanted to have a clear conscience.

Springer was removed from ministry in 1985, amid abuse allegations. Five years later, he was formally laicized.

In a move aimed at restoring trust with parishioners amid a clergy abuse scandal that has engulfed the Catholic Church worldwide, the Jesuit o…

Bishop likened the diocese’s lack of action to someone letting a rabid dog loose. Though the dog may be doing the biting, the owner is also responsible, he said.

“There’s a lot of guys with Springer’s actions that need to ask God for forgiveness, aside from him,” Bishop said. “They really shouldn’t be in ministry. They should have to pay for their actions. God requires that of us. He might not condemn us if we’re his children, but he certainly does chastise us.”

Lost in a haze of addiction and depression, Bishop said, he finally found light, thanks to a pastor in Florida who refused to give up on him. Bishop’s favorite Bible verse and life motto is Genesis 50:20 — “You intended to harm me, but God intended it for good to accomplish what is now being done, the saving of many lives.”

“I credit Jesus Christ for my recovery and nothing else,” he said. “I tried for decades.”

Bishop said his faith in God remained despite the abuse, but that he became a Baptist for theological reasons. He has three grown daughters, five grandchildren and two more on the way. He has become increasingly public with his story, and even shared it one Sunday with his church. But telling his children about the abuse was the hardest of all, he said.

Bishop is headed to Costa Rica later this year to work as a missionary. He said he expects to minister to children who are sexual abuse victims.

He never saw Springer after the abuse stopped, not even through the lawsuit. But if he had the chance to talk to his former priest again, he said, he would not harangue Springer over the years of his life lost to drugs and depression.

As for Bishop, he would forgive the man who abused him.

The Diocese of Baton Rouge is expected on Thursday to release a list of priests who have been credibly accused of sexual abuse. Ahead of the r…