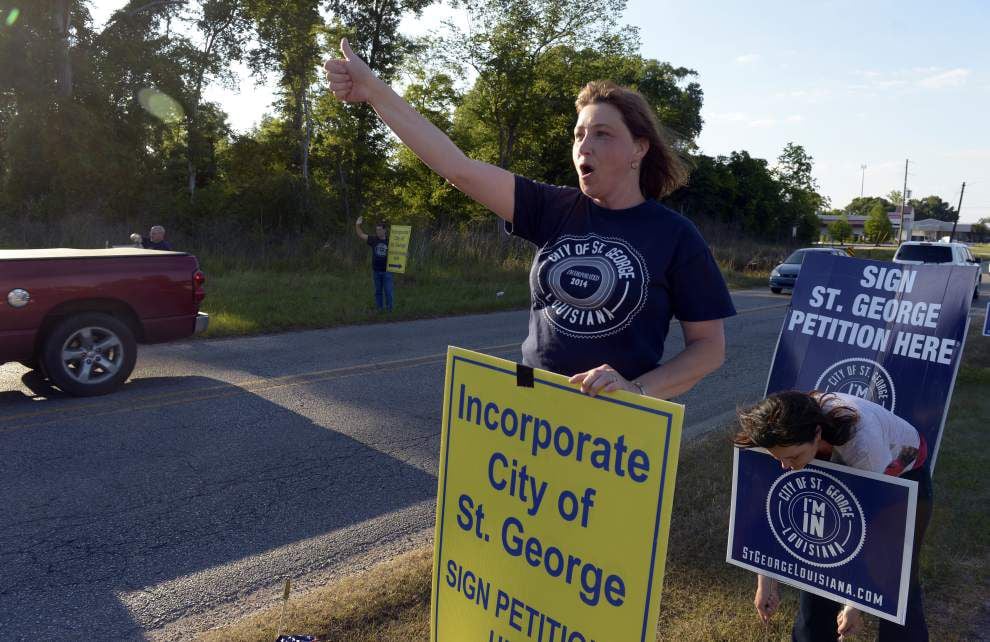 Pam Doran, center, gives a thumbs up to a honking driver as she and Darlene Turpin, right, both volunteers attempting to get signatures for the petition to incorporate St. George, work on March 20, 2015, outside Woodlawn Baptist Church in Baton Rouge. That petition drive failed by 71 signatures. 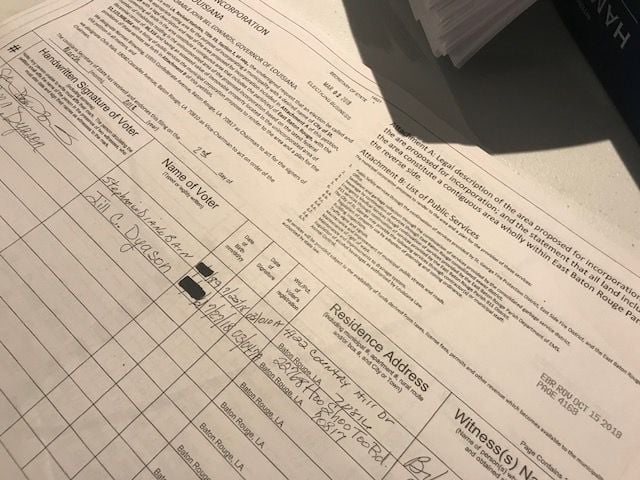 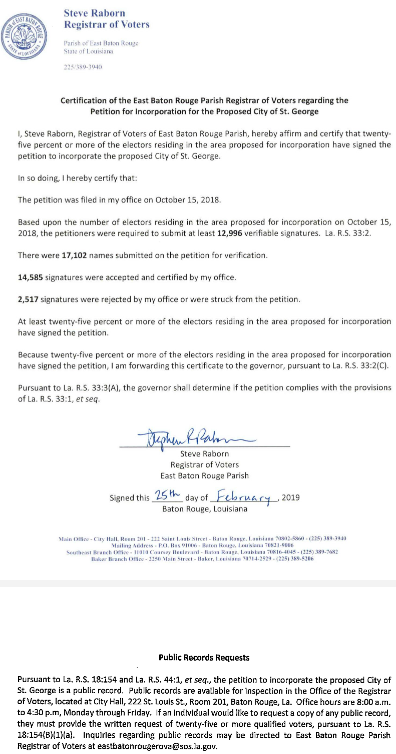 Pam Doran, center, gives a thumbs up to a honking driver as she and Darlene Turpin, right, both volunteers attempting to get signatures for the petition to incorporate St. George, work on March 20, 2015, outside Woodlawn Baptist Church in Baton Rouge. That petition drive failed by 71 signatures.

The robust effort to create a new city in southeast East Baton Rouge Parish cleared its first hurdle Monday with organizers securing enough signatures on a petition seeking to place the proposal on the ballot.

Now organizers of the proposed city of St. George must wait and see if Gov. John Bel Edwards will set an election for registered voters within the proposed city to decide whether to incorporate a fifth city in the parish. And, whether there will be any legal challenges to holding such an election.

The next question would be whether Edwards calls for the election on the May or fall regular ballots or sets a special election.

As of late Monday, officials with the Governor’s Office said they hadn’t yet received the petition certification documents from parish East Baton Rouge Parish Registrar of Voters Steve Raborn.

“Once we do and have adequate time to review it, we will move forward with the next steps,” Shauna Sanford, communications director for the Governor’s Office, said in an email Monday.

Sanford said the state has certain legal requirements —like legal descriptions of the proposed city’s boundaries, population data and statement of assessed value of the real property within the unincorporated area —for establishing new incorporated areas and the Governor’s Office has to ensure the petition is in compliance with those laws before making a decision.

The next question would be when to hold the election.

Mayor-President Sharon Weston Broome in a statement Monday echoed sentiments from the St. George opponents who are pushing for an election date in the fall when voter turnout would likely be higher.

Drew Murrell, an attorney and spokesman for the St. George campaign, said they just want to get the measure out to voters as quickly as possible.

“We’re just happy to get on the ballot,” Murrell said. “The sooner the better (but) we’ll take whatever ballot we can get on.”

Here's why St. George's effort in Baton Rouge will happen, leaders of a similar project say

The leaders of Central know what it’s like to create a new city in East Baton Rouge Parish, and they say they see the people trying to organiz…

Raborn announced St. George proponents had gathered the percentage of signatures they needed to push their effort forward through a release published by the state’s Attorney General’s Office, which he asked to step in as his office’s spokesman through the petition verification process.

When St. George proponents tried in 2015, organizers fell 71 signatures short of their goal.

The petition filed filed Oct. 15, 2018, needed valid signatures from 25 percent of the 51,804 active registered voters living within St. George’s proposed boundaries at the time the petition drive officially began. That pinned the proponents’ goal at 12,996 signatures.

In his statement Monday, Raborn said proponents submitted 17,102 signatures for verification. Raborn said 14,585 signatures were accepted and certified by his office and 2,517 were rejected and/or struck from the petition.

“The results from our independent vetting closely match that of the Registrar,” said M.E. Cormier, one of the leaders of Better Together/Residents Against the Breakaway. “At this point an election looks inevitable. We anticipate an October election as to get the largest amount of community input on the issue.”

Murrell said the governor could set the election as early as May or call a special election if he doesn’t choose one of the set election dates later this year.

There has been speculation legal challenges from the opposition and city-parish could delay any possible vote and/or incorporation of St. George, similar to what happened with past efforts in the now established cities of Baker and Central.

Cormier pointed out any resident in the parish has 30 days to “legally respond” to the Registrar’s results regarding the petition but neither she nor Broome would comment Monday on whether they intend to do so.

The window has closed: People who signed the latest petition to place the St. George proposal on the ballot can no longer remove their names, …

Michael Beychock, spokesman for One Baton Rouge, another group opposed to the St. George effort, has been working alongside Cormier and said Monday it’s premature to start talking about any legal challenges.

“Let’s see if there is an election called and we can cross that bridge when we get to it,” he said.

In her statement Monday, Broome reiterated her stance that keeping Baton Rouge together is the better option. But added that if an election is to take place, it needs to be when higher voter turnout is expected.

“I encourage not only those who reside inside the proposed city’s boundaries, but all residents of the parish, to closely evaluate the proposal prepared by St. George organizers as well as independent analyses that outline the proposed city’s impact on the city-parish and the services it claims it will provide,” Broome’s statement reads.

“Citizens across the parish deserve to have a clear understanding of how this proposed city would impact their personal finances,” the mayor stated. "Economists who have studied the proposal stated that St. George would operate in a deficit and would have no choice but to raise taxes to provide adquate services to its residents."

Much like the cities of Baker, Zachary and Central, St. George would rely on the city-parish for certain services it already provides in the unincorporated area while contracting out other municipal services, according to the proposal posted on the proposed city’s official website.

St. George petition is signed and delivered, but is effort to vote on breakaway city sealed?

That proposal also says fire protection would be provided by the St. George Fire Department and the East Baton Rouge Parish Sheriff's Office will police streets.

The proposed city's year-one budget outlines $33 million in expenditures and approximately $58 million in revenues — a significant portion, an estimated $53 million, of which would come from sales tax revenues within the boundaries.

But two LSU professors who analyzed the numbers for the Better Together group say St. George proponents have overestimated revenues and underestimated expenses, which would likely lead to tax increases not only in the new city but across the parish, to make up for revenues lost the the city-parish from the incorporation.

Murrell on Monday stood by their financial outlook for St. George and double downed on previous statements their incorporation wouldn’t lead to tax increases for residents in the proposed city.

“We’re going to be good stewards of tax dollars by making public/private partnerships that make sense,” he said. “Their studies are flawed. They’re the ones that aren’t being honest with how they compile their results.”

“We’re going to have plenty of money and not spend it needlessly or in a wasteful manner,” Murrell said.

The organizers behind incorporating the new proposed city of St. George cleared a major hurdle last week in gathering enough signatures to for…