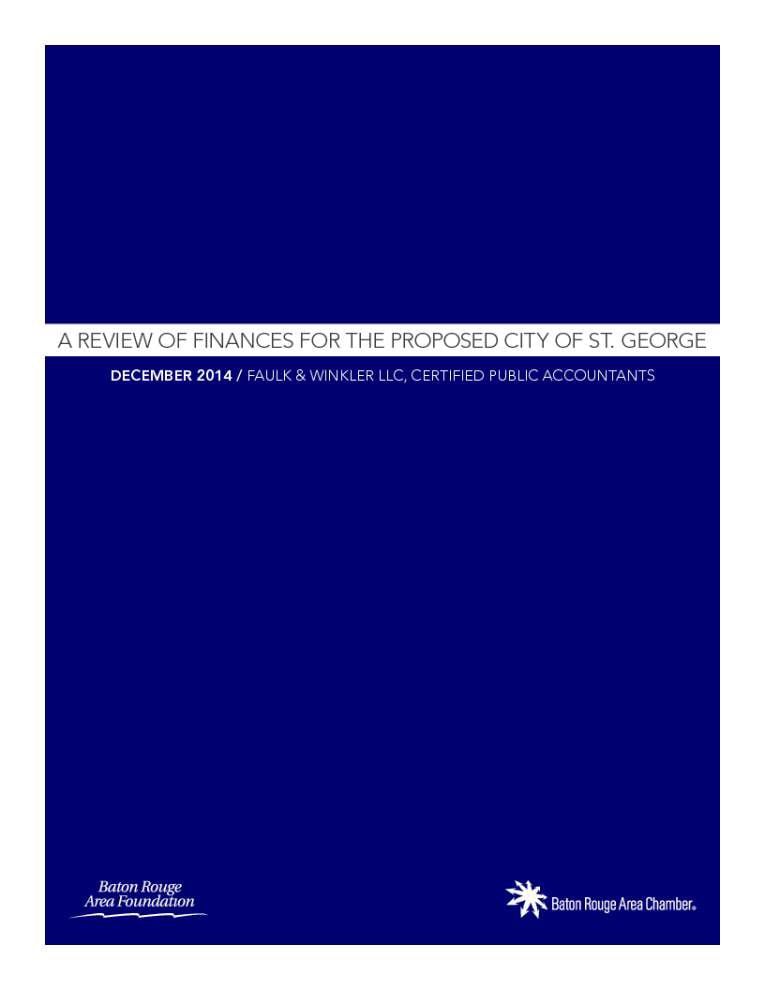 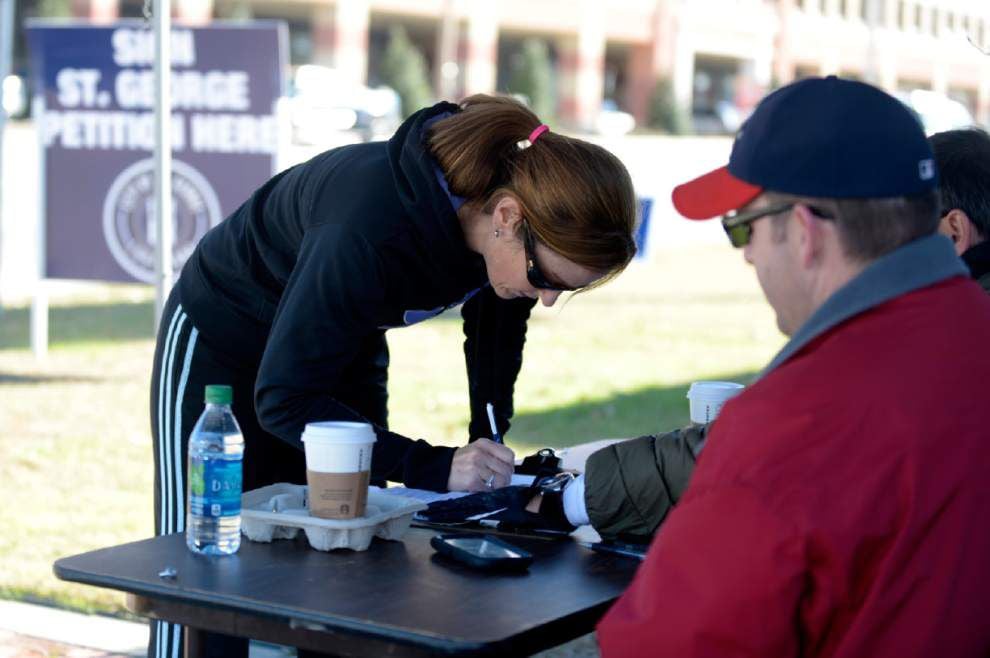 Advocate staff photo by CATHERINE THRELKELD -- Dustin Yates, right, helps Rebecca Mouk sign up during a petition drive for supporters of the City of St. George outside Louisiana Lagniappe on Bluebonnet Boulevard. in Baton Rouge in this January 2014 Advocate file photo.

Advocate staff photo by CATHERINE THRELKELD -- Dustin Yates, right, helps Rebecca Mouk sign up during a petition drive for supporters of the City of St. George outside Louisiana Lagniappe on Bluebonnet Boulevard. in Baton Rouge in this January 2014 Advocate file photo.

If St. George successfully incorporates and becomes a new city, the new government and school board would have to raise property taxes by at least 20.5 mills to cover city operational costs and to build enough schools to house all the students living in the area, according to a report released Friday by the Baton Rouge Area Foundation and the Baton Rouge Area Chamber.

The most recent report concluded St. George would immediately run into a cash shortfall both for city operations and for the capital construction that would be required to build schools to support an independent school system.

St. George spokesman Lionel Rainey said organizers were only being made aware of the report on Friday and had never been consulted by Faulk and Winkler for questioning about their budget proposal.

He said city organizers would review the report over the holidays and respond to it in detail after the new year.

BRAF and BRAC officials declined comment for this article, saying the report stands on its own.

But M.E. Cormier, of Better Together/Residents Against the Breakaway, which opposes the creation of a new city of St. George, welcomed the report’s release.

“It is a relief to see this so-called budget finally starting to get the scrutiny it deserves,” Cormier wrote in an email. “And frankly, this looks like the tip of the iceberg in terms of the actual costs of a new city.”

The St. George budget projects revenues of $80.8 million for operations — mostly generated from about $68 million in sales tax revenues and $7 million in gaming revenue from L’Auberge Casino.

Several high-profile businesses have in recent months petitioned to be annexed into the city of Baton Rouge, meaning St. George could not access the sales tax dollars those businesses generate.

The Mall of Louisiana and L’Auberge Casino were the most significant annexations from a budget perspective. But Celtic Studios, Costco, Our Lady of the Lake Regional Medical Center and a handful of undeveloped parcels in the southwest part of the parish also have annexed.

St. George officials have previously estimated the annexations would result in a loss of about $16 million in revenue. But they contended their budget would still have a $4 million surplus after spending $60 million annually for administrative costs, a contract with the Sheriff’s Office and an outsourced contract for public works services for the proposed new city’s residents.

The accountants said the St. George budget revenues actually will be closer to $51.2 million, because of hits to the sales tax base from the recent annexations and other factors.

They say St. George organizers have overestimated what they would receive from licensing and permit fees and failed to account for tax exemptions afforded to industrial taxpayers.

The study also assumes St. George may have to pay its share of $1.35 billion in legacy costs — payments for unfunded pension and postemployment benefits — which the firm estimates at $106.8 million, or $3.6 million a year for 30 years, not including inflation.

St. George’s proposed budget does not include any funding for legacy costs.

The report is based around the estimate by organizers that St. George will have annual expenditures of $60.3 million, as stated in the proposed budget. But it says the budget does not have enough detail for the firm to analyze the spending.

Rainey said St. George leaders always have expected that their city would be run more efficiently than the average city.

“We don’t plan on running this city the way Baton Rouge runs a city,” he said. “This city will be run efficiently and responsibly.”

The report estimates that to address city operations and debt service, the city of St. George government will need to levy 11.5 mills of property taxes.

The report also says there aren’t enough schools and related facilities to serve the number of students that would be in the new school system. The firm estimates that the new city’s school system would have to spend $141 million on facilities immediately, which could be funded with a 9-mill property tax.

The effort to create a new city was born out of two failed attempts in the state Legislature to pass an independent southeast parish school system. Legislators complained that the area should not have its own school system because it’s not its own city.

That sentiment caused organizers to launch a massive petition drive, collecting about 18,000 signatures, in an effort to incorporate into a new, 80-square-mile city with 107,000 residents.

The petition was submitted in October, and if the number of signatures required is verified, voters within the proposed boundaries will have an opportunity to vote on creating the new city in 2015, save for legal challenges.

The report also took issue with St. George’s police protection budget of $3.1 million, which is expected to be applied mostly toward a contract with the Sheriff’s Office for increased protection.

The area is currently served by the Sheriff’s Office, which is responsible for protecting the unincorporated areas of the parish.

The report notes St. George anticipates spending $30 per person on law enforcement, compared to other cities with similar sized populations that spend between $106 and $342 per person.

St. George officials have previously said they are satisfied with the level of protection they receive from the Sheriff’s Office and that it would be wasteful to build a new, expensive police department. Sheriff Sid Gautreaux also has said he is comfortable offering the area a contract for additional services as proposed.

St. George officials have said for months that they don’t expect to have to raise taxes to pay for any operations. They also said they believe the school system would generate sufficient revenue to meet its capital needs.

Residents in Zachary, Baker and Central have all had tax increases either for city services or school infrastructure as a result of their incorporations.

In October, St. George incorporation effort leader Norman Browning admitted at a speaking event that “you can never say with certainty” that taxes won’t go up, but he noted that there are no guarantees Baton Rouge wouldn’t increase taxes either.