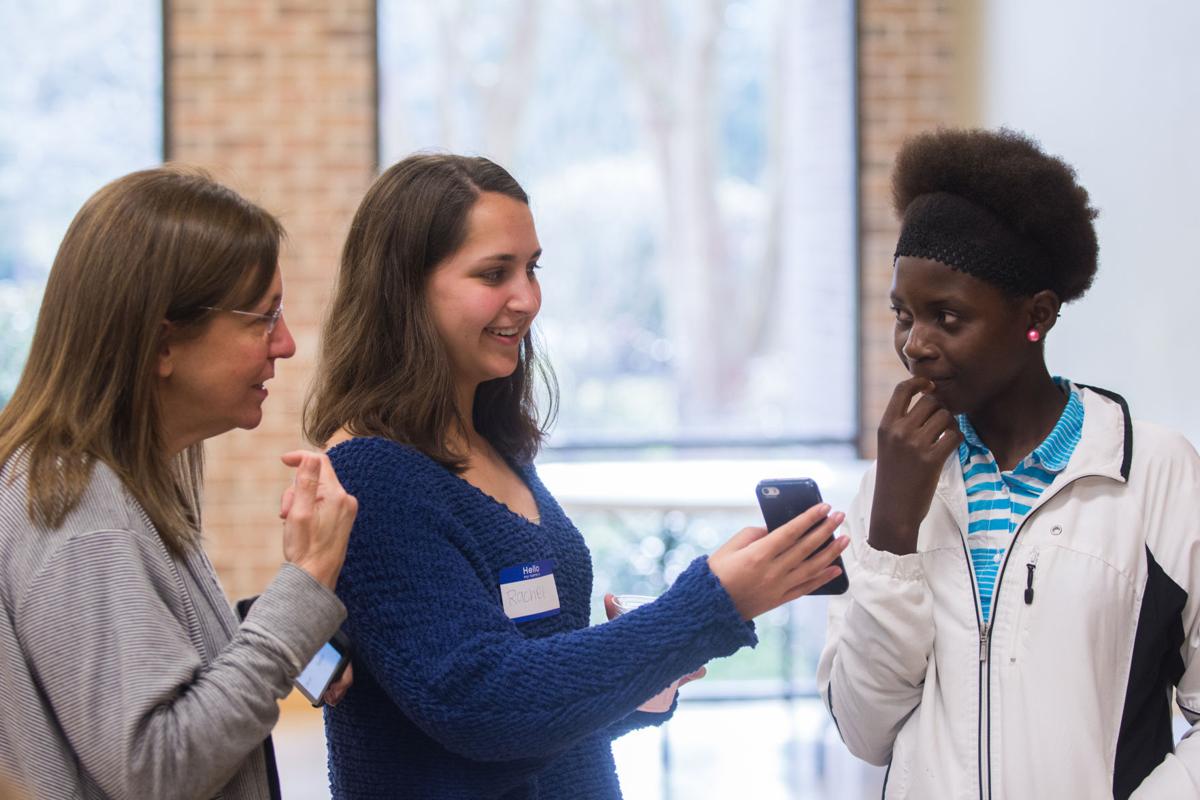 Rachel Posner (left) shows Chaona Ikabelo (right) videos on her phone during the Baton Rouge Federation of Temple Youth's meet and greet with refugees on February 5, 2017 at Beth Shalom Synagogue 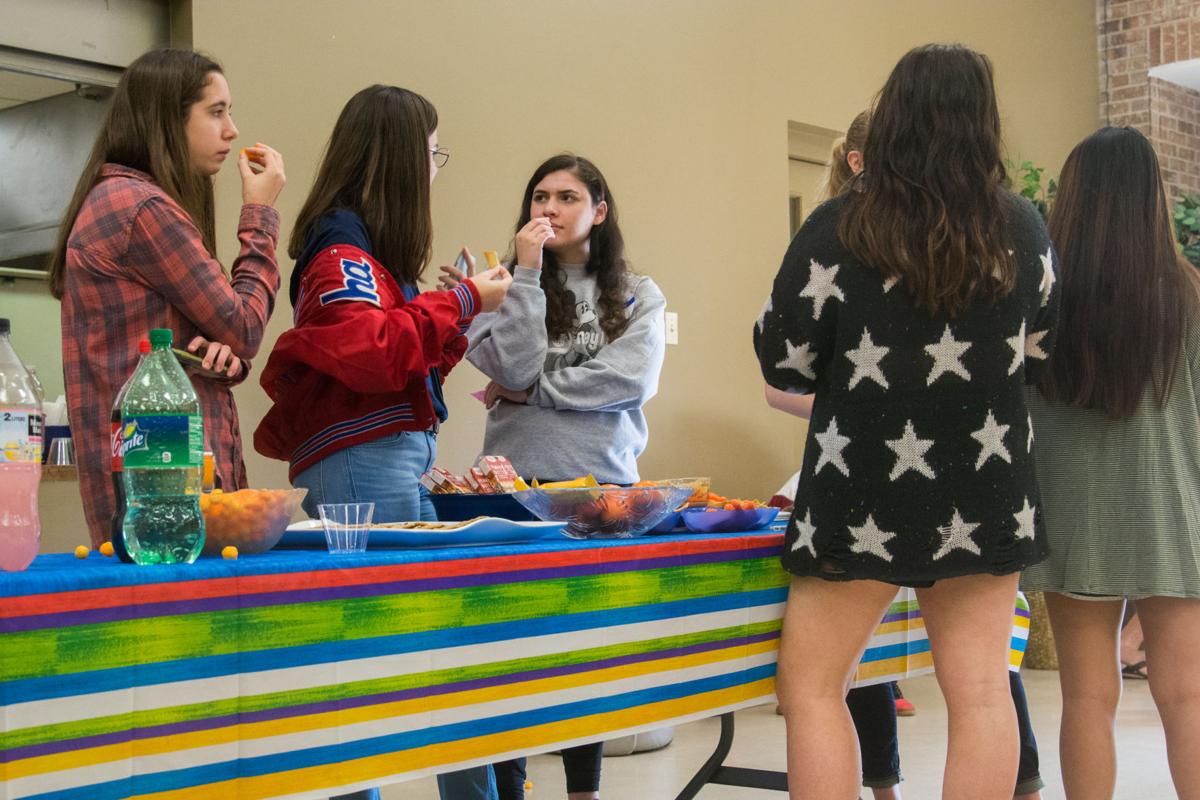 Teens share snacks and talk during the Baton Rouge Federation of Temple Youth's meet and greet with refugees on February 5, 2017 at Beth Shalom Synagogue 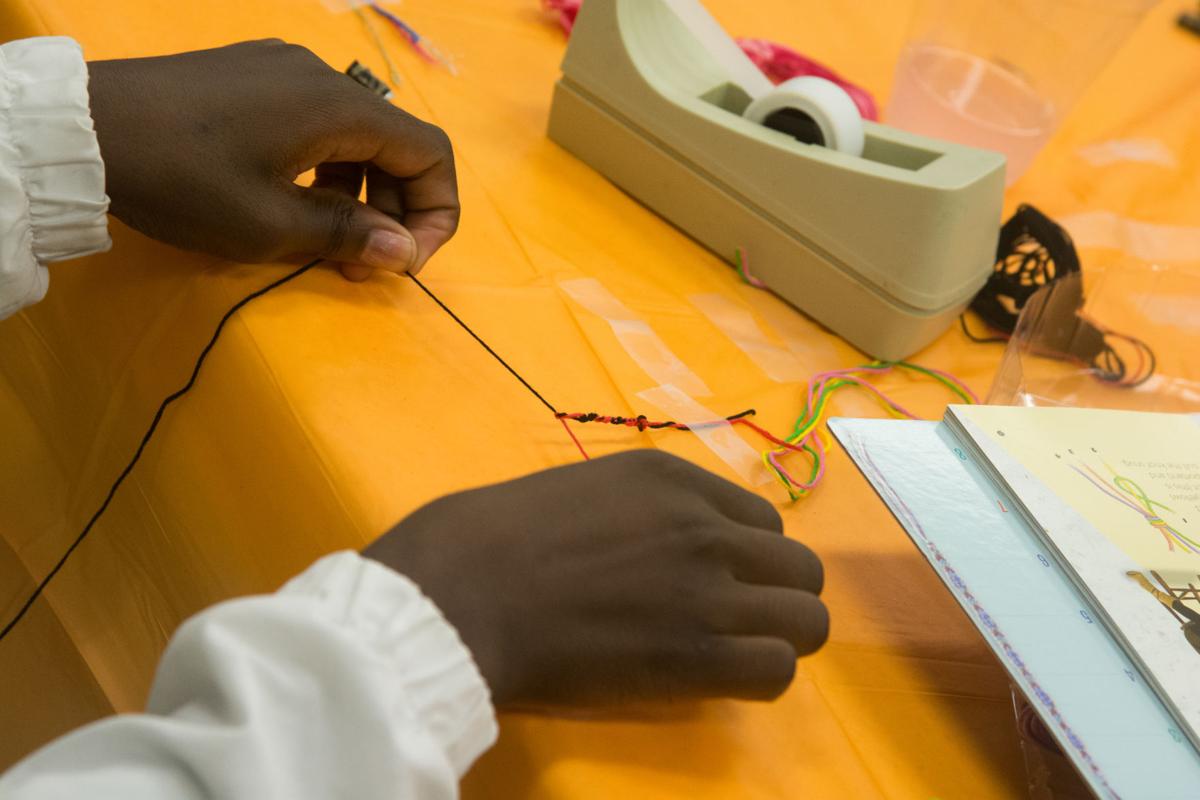 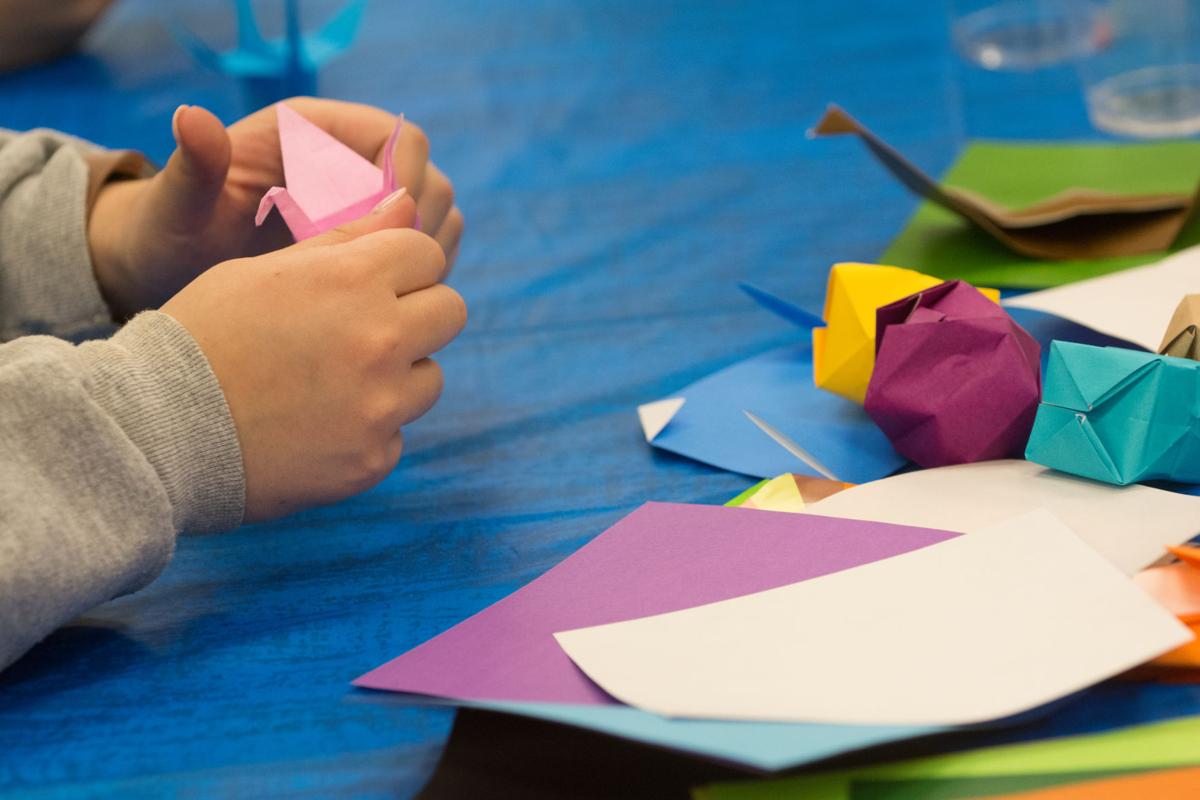 Teens are taught to make oragami swans during the Baton Rouge Federation of Temple Youth's meet and greet with refugees on February 5, 2017 at Beth Shalom Synagogue

Rachel Posner (left) shows Chaona Ikabelo (right) videos on her phone during the Baton Rouge Federation of Temple Youth's meet and greet with refugees on February 5, 2017 at Beth Shalom Synagogue

Teens share snacks and talk during the Baton Rouge Federation of Temple Youth's meet and greet with refugees on February 5, 2017 at Beth Shalom Synagogue

Teens are taught to make oragami swans during the Baton Rouge Federation of Temple Youth's meet and greet with refugees on February 5, 2017 at Beth Shalom Synagogue

Conversation wasn't easy, as English is still new for the six refugee children who had been recently resettled in the Baton Rouge area. Hanging out with unknown teenagers can be awkward, especially when it might seem little is in common between local Jewish youth and refugees from some of the world's most challenging places to survive.

But together, it seemed the teens moved beyond the obvious barriers.

"Even though I couldn't even speak to Eca, I still got to know her, and she can still pick up on our personalities," said Sam Litten, 17, a member of the Baton Rouge area Jewish youth group. "We laughed with her."

Litten and about 15 other members of the Baton Rouge Federation of Temple Youth, which includes members from Beth Shalom Synagogue and Congregation B'nai Israel, spent Sunday afternoon hanging out with five refugee teens and one child, painting nails, playing soccer, snacking, making crafts and laughing. The refugee children are originally from Syria, Iraq and Tanzania, and had moved to Baton Rouge within the last year with support from Catholic Charities.

Litten spent most of the afternoon at Beth Shalom Synagogue making origami with Eca Bwinga, 17, originally from Tanzania. Bwinga was quiet, but she was eager to pick new designs for the teens to try to fold together, and she often laughed at the other teens' antics. At one point, Bwinga giggled as another girl showed her photo filters on the Snapchat app, distorting their faces in silly ways, adding flowers or the Superbowl team's logos to the screen.

"I got to understand the idea of refugees better and how they're just normal people, normal people coming to have a better life, that's really all they want here," Litten said. Though they didn't have full conversations, Litten said she heard a little about Bwinga's journey to the U.S. with nine relatives, and about her taste in music.

A 12-year-old girl who came with her family from Syria to Baton Rouge this summer painted her nails with some of the youth group girls, sharing with them that pizza is her favorite food, and bonding with them over their mutual love of soccer. They later played a pick-up game together outside with the girl's two brothers.

"Whenever you can put a face and a person and an experience of having some fun, it helps break down barriers," said David Aguillard, executive director of Catholic Charities of the Diocese of Baton Rouge. "It helps people realize we're all one human family and that some of these divisions are really our artificially created divisions."

Refugees have lived through unimaginable circumstances, often violence, torture and suffering that forced them flee their homes, many times with nothing, Aguillard said. He said he is always open to any idea to help welcome refugees to the community, which is why he jumped on this idea from the youth group when they came to him a few weeks ago. Catholic Charities has been working to resettle refugees in the area since 1976.

"To see the combination of faiths all motivated to welcome people from oversees, to become our new neighbors, to assimilate into our culture and our city, to help them make that adjustment, that's what life and faith is all about, helping one another," Aguillard said.

Rabbi Natan Trief of Beth Shalom Synagogue said in a statement released before the event: “Our tradition commands us to welcome the stranger. We honor each person with love and welcome each person with open arms. During this event, we strive to foster individual connections, honor stories, and and look in each other’s eyes to always see the divine image.”

Beth Shalom has worked with Catholic Charities for about a year helping resettle refugees.

"It was in the news and we felt like, as the Jewish community who have been strangers in the past, it's part of our mission to help the stranger," said Julie Hoffman, an adviser to the youth group. "We're a country of immigrants and we need to all make each other feel welcome and not be afraid of each other."

Behind the cheese puffs, friendship bracelets and soccer games, the event was guided by the tradition of welcoming the stranger, said Hoffman, a value shared across many religions.

"I was very impressed to hear the teens of the two synagogues would be hosting … that's a very adult choice they made," said CCDBR board member and priest Alec Sheldon, who came to the event. "I hope it is one that moves others to look for ways to include people who are different into our existing circles."

This article was changed after publication.