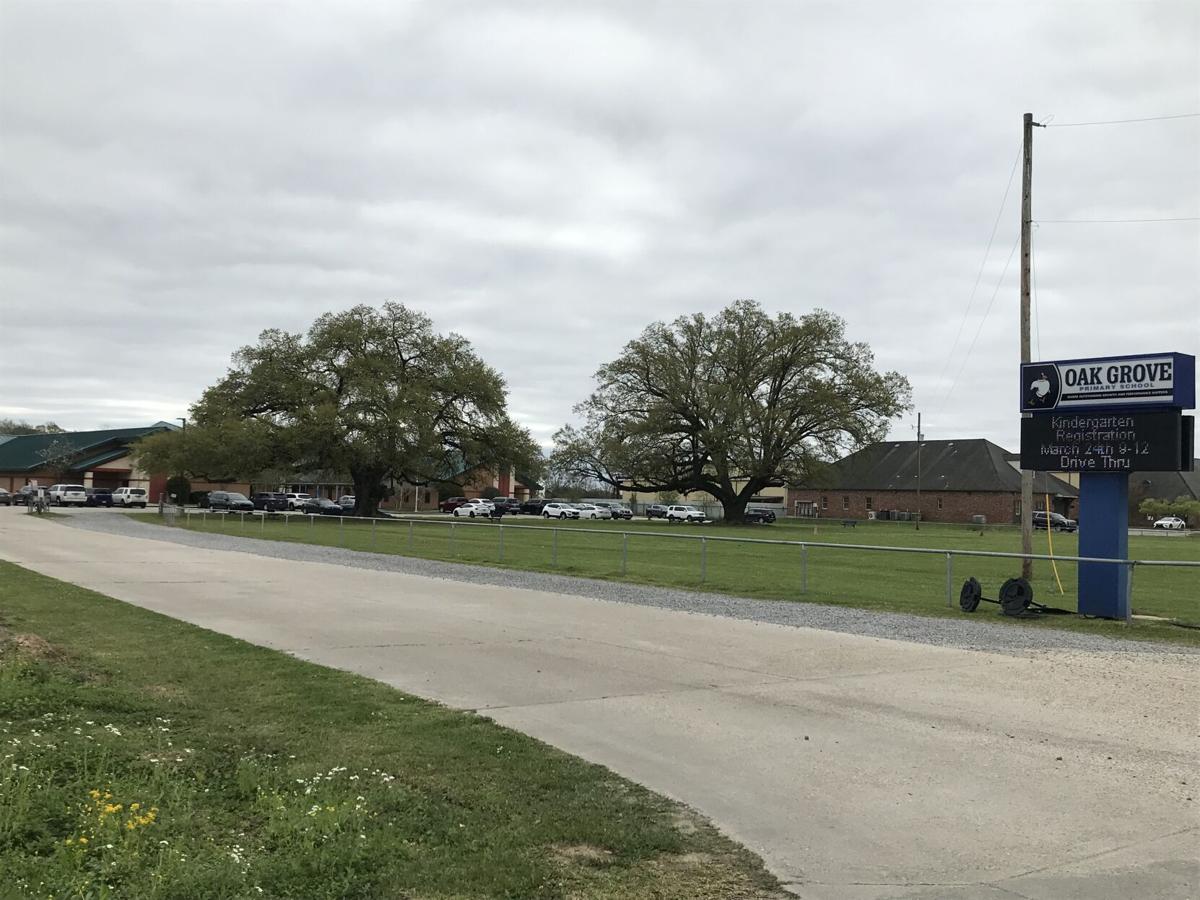 Oak Grove Primary School, as seen Friday, March 19, 2021, has a sewage treatment plant that serves the La. 42 area and the school. Parish officials are seeking to expand it shortly before a sewer asset sale goes to voters April 24. 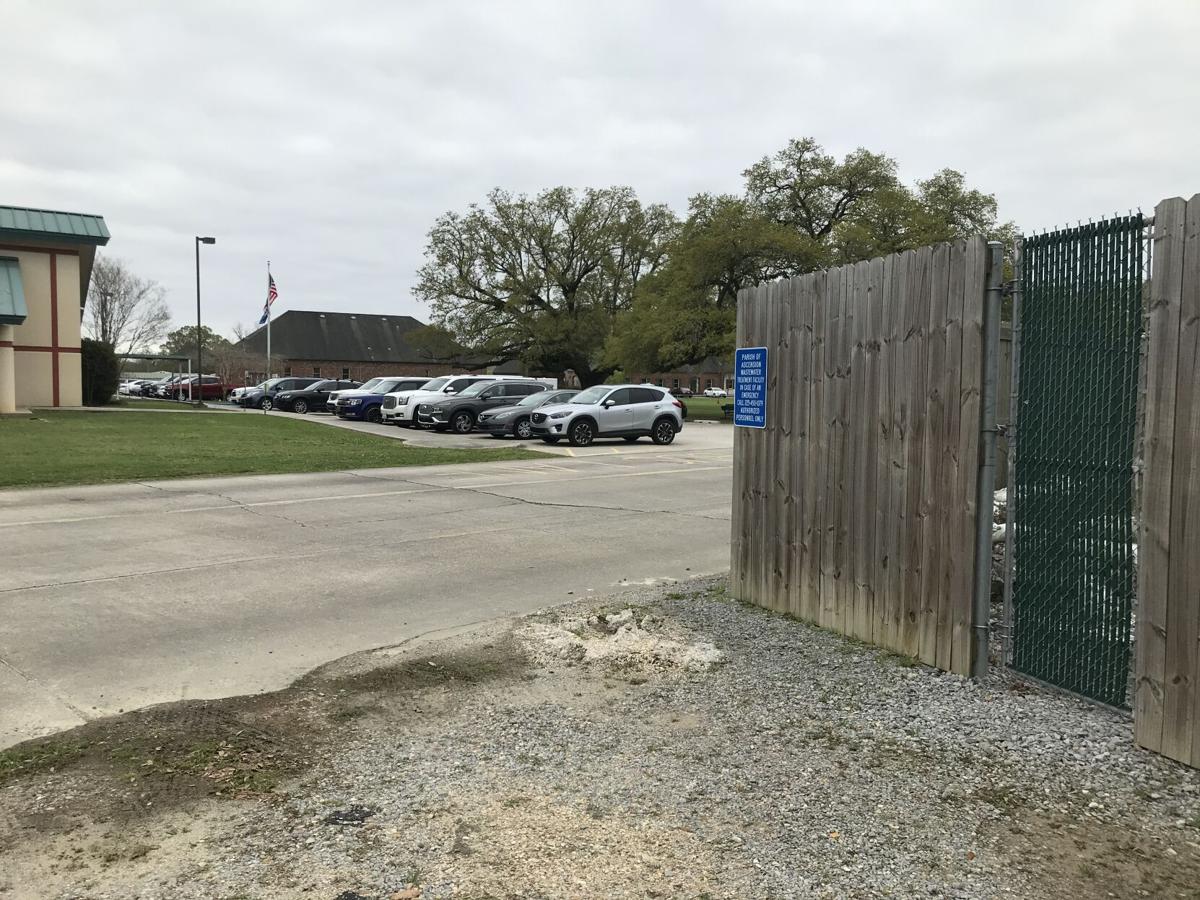 The sewage treatment plant at Oak Grove Primary School, seen behind a fence on Friday, March 19, 2021, serves the school and surrounding homes and businesses. The parish owns the plant. Some parish officials say it has overflowed but records don't indicate that.

Oak Grove Primary School, as seen Friday, March 19, 2021, has a sewage treatment plant that serves the La. 42 area and the school. Parish officials are seeking to expand it shortly before a sewer asset sale goes to voters April 24.

The sewage treatment plant at Oak Grove Primary School, seen behind a fence on Friday, March 19, 2021, serves the school and surrounding homes and businesses. The parish owns the plant. Some parish officials say it has overflowed but records don't indicate that.

Some council members initially balked at spending the money so close to the April 24 sewer vote. But parish utilities officials said the system on the Oak Grove Primary School campus is already over capacity, with more demand expected to come online soon.

They say it has been "teetering on that line" of major troubles.

Some council members suggested the plant has already had sewer overflows, though administrators didn't acknowledge that directly and, records show, haven't reported any overflows in recent history to state regulators.

"I think we've all known about this, and I'm'a tell you. This is one, we don't need to be playing with this," Councilman Dempsey Lambert said in a recent council meeting. "This is right beside the school. There's been a number, a number of overflows out there. You know this is all on Highway 42, and it doesn't look good, so I'm not going to hold this up."

The existing plant, which sits across from the Oak Grove school building in a fenced off area, was formerly the public school's treatment plant before the parish bought it a few years ago to service the La. 42 area.

The rental agreement for the temporary expansion of the Oak Grove system underscored the degree to which the proposed sewer asset sale to a Jim Bernhard-led private equity firm represents a change in direction for Ascension government.

The parish had spent decades trying to create and expand its sewer systems and add customers. On the eve of the vote to sell, the parish must fulfill previous agreements to meet the demand from customers in the La. 42 area.

But current parish officials have decided the sewer system costs too much to subsidize — about $3 million per year — and have been unable to broker a public-private partnership agreement with Bernhard's firm and others to expand the parish systems.

Under the proposed sale, the parish would sell a collection of sewer systems, sewer lines and other infrastructure to National Water Infrastructure for $9.26 million, plus earn annual franchise fees. National Water would build a new regional sewer plant to serve a combined 19,000 parish and private customers and also retire neighborhood plants.

The council ended up voting Thursday night for two contracts: one to rent the portable treatment system for at least a year and another to hire an engineer for design and other services needed for permitting at a combined cost of $408,000.

Before the happened, though, Councilmen Corey Orgeron and Dal Waguespack asked parish officials if this agreement was absolutely necessary. Orgeron said concerns about the Oak Grove plant have been known for more than a year, ones that he had warned about.

"Are we at that point finally where the eyes have been opened and the Utilities Department administration is saying, 'Yes, we have to spend this money to resolve this issue?'" he said.

He said if that is the case, that's one thing, but if there is some hesitation, he would like to defer a vote until after the election.

Ken Dawson, infrastructure division director, said the goal of the contract is to find the most cost efficient and quick way to meet the demand needs in Oak Grove, if and until voters support the sale of the systems.

"The reason why we went this way is we're just trying to make it until Bernhard comes over and takes over the system," he said.

The parish had explored building an expanded treatment system, about three and a half times the size of the temporary one being rented, but Dawson said the cost was $1.9 million.

Parish officials also pointed out that, even if voters do support the sale, the transfer wouldn't necessarily happen right away.

But Orgeron's comments and those of others led to a vote to defer action on the rental contract. It failed 3-7, with only Orgeron and Councilmen Joel Robert  and Alvin "Coach" Thomas voting yes. Councilman Aaron Lawler was absent.

Only Robert ended up voting "no" for the leasing agreement. No one voted against the separate engineering contract.

During the discussions, Councilmen Lambert and Dal Waguespack indicated the existing Oak Grove plant had had past sewer overflows at the school and also Dawson suggested that Gavin Fleming, the parish utilities director, had previously mentioned past overflows in talks earlier that night.

But, in those comments, Fleming didn't quite acknowledge overflows had happened. When asked about them, he said that the system has had "a lot of issues" and most recently that pumps failed and the system had been "teetering on that line."

"It's a game I don't really like playing with. You know, 'cause we're right next to the school, and I really don't want to be held responsible for, you know, having a big overflow at the school, even though we're ... doing the best we can. We're managing it," he said. "But it's a fairly important matter."

A school spokeswoman referred questions about sewer overflows to the parish on Friday. Parish officials didn't immediately respond to a request for comment.

State Department of Environmental Quality officials said they have received no reports or complaints of overflows at the school-based plant.