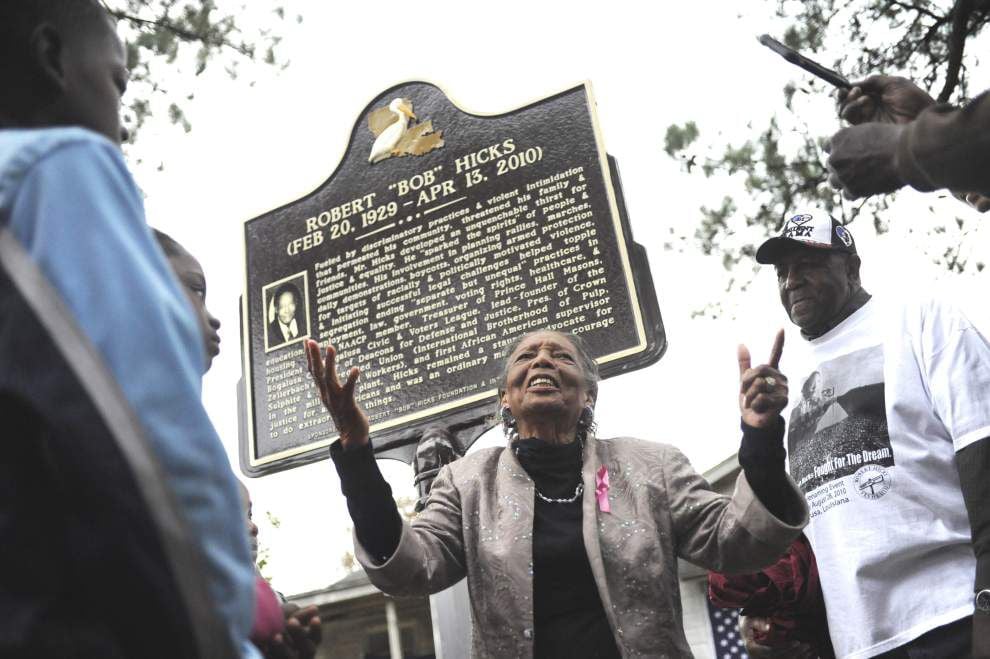 Photo provided by Olivia McClure -- Jackie Hicks stands next to the new National Registry historic marker in front of their former home in Bogalusa. The home was attacked in the 1960s by Klansmen angry that Hicks, a civil rights leader in the city, was housing national CORE organizers. 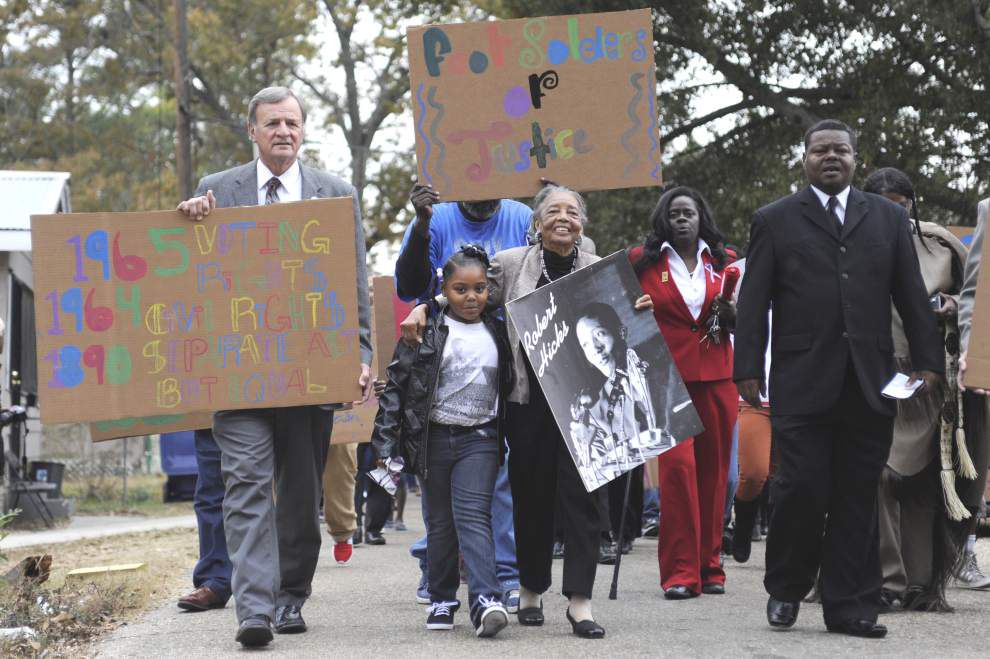 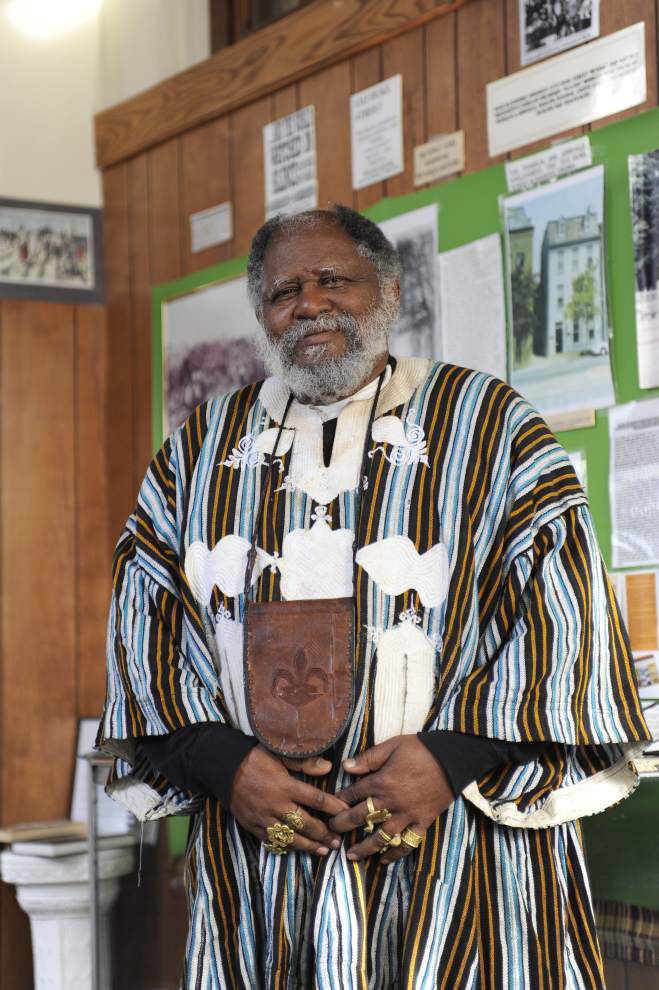 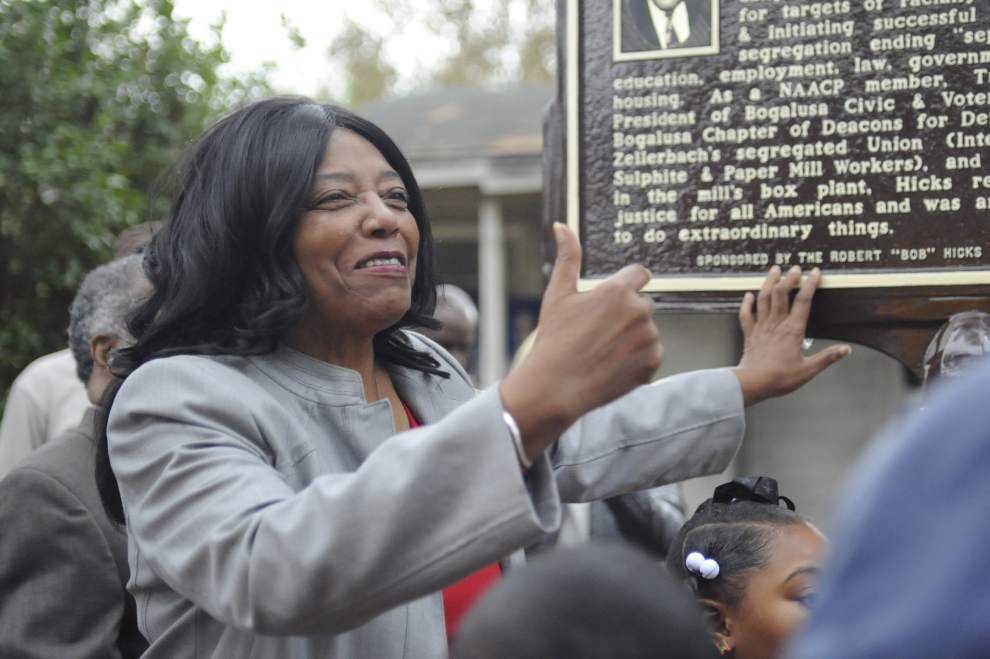 Photo provided by Olivia McClure -- Barbara Hicks Collins, who organized the movement to get her parents' home on the National Registry, shows pride in the first historic marker in Washington Parish commemorating an African-American. Her father, Robert Hicks, coordinated Civil Rights efforts there in the 1960s and led the 100-mile march to the State Capitol in Baton Rouge in 1967. 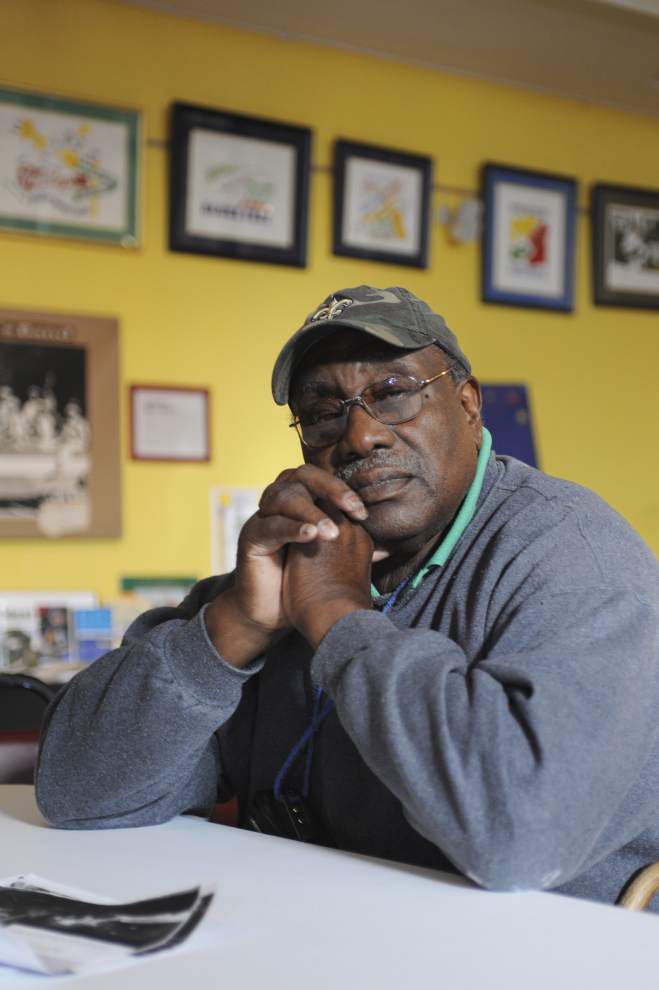 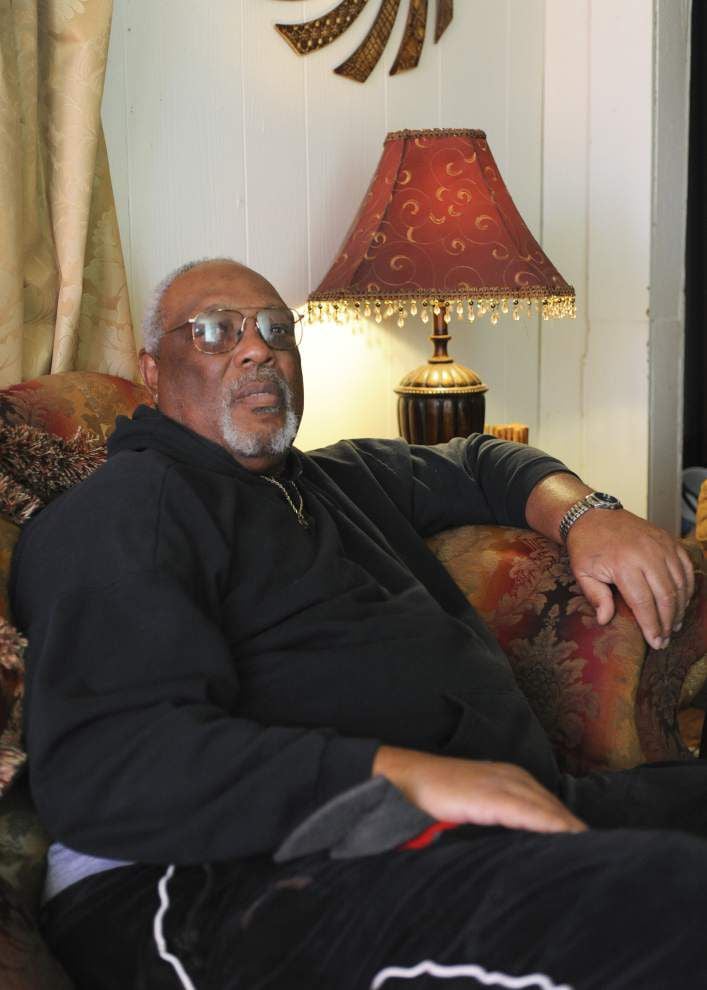 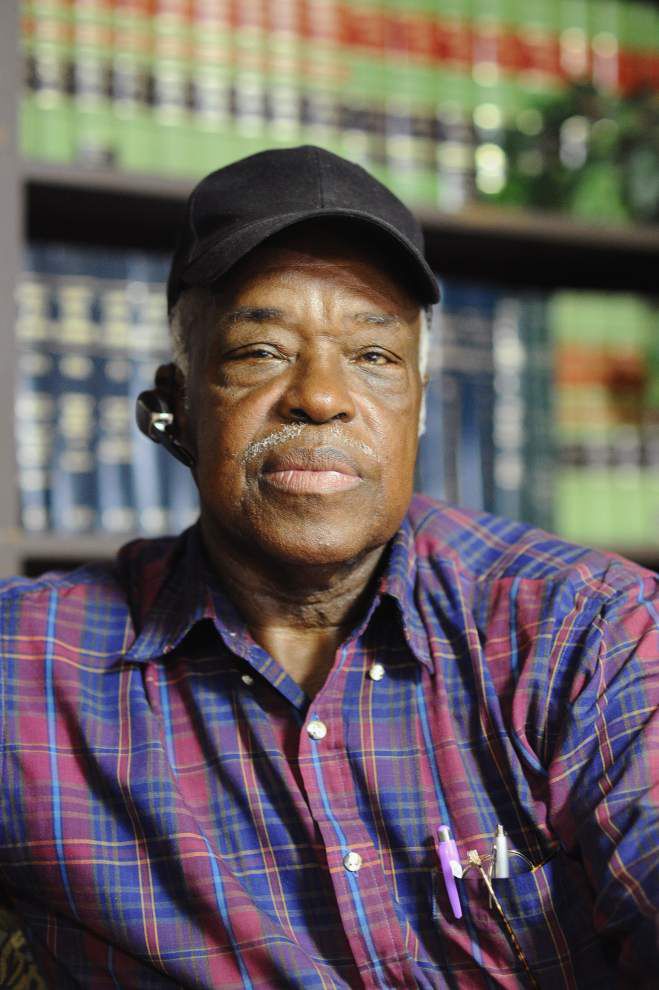 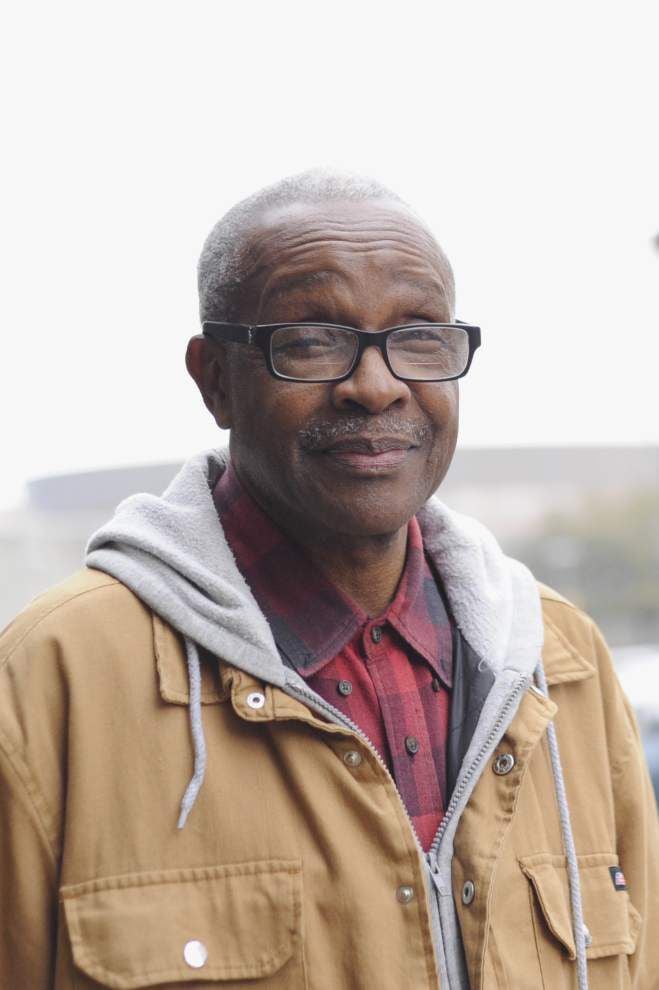 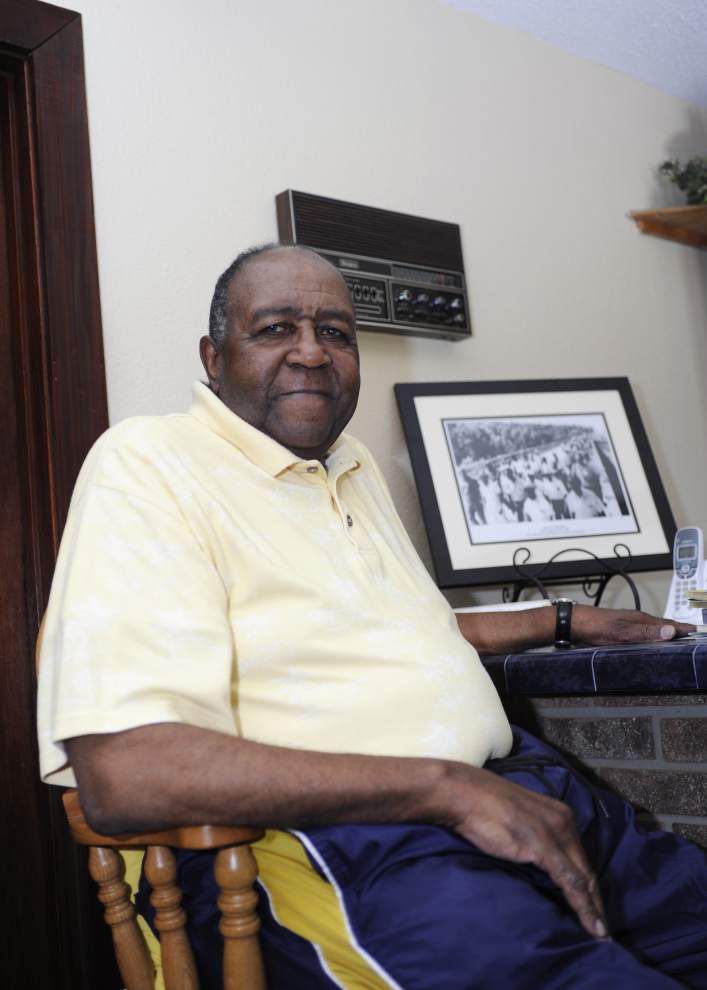 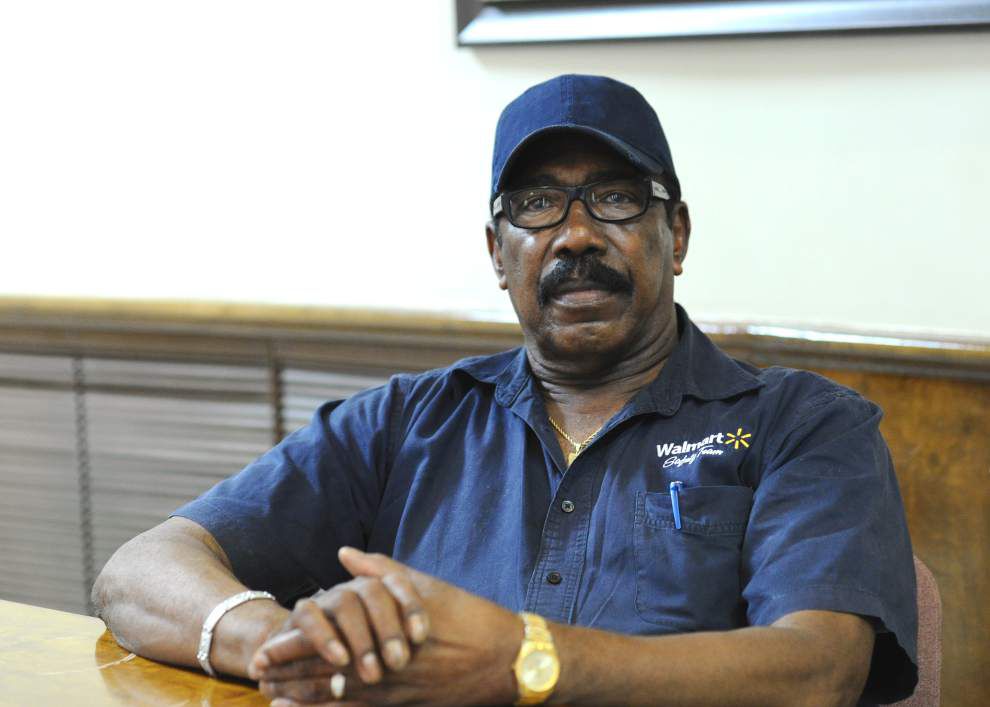 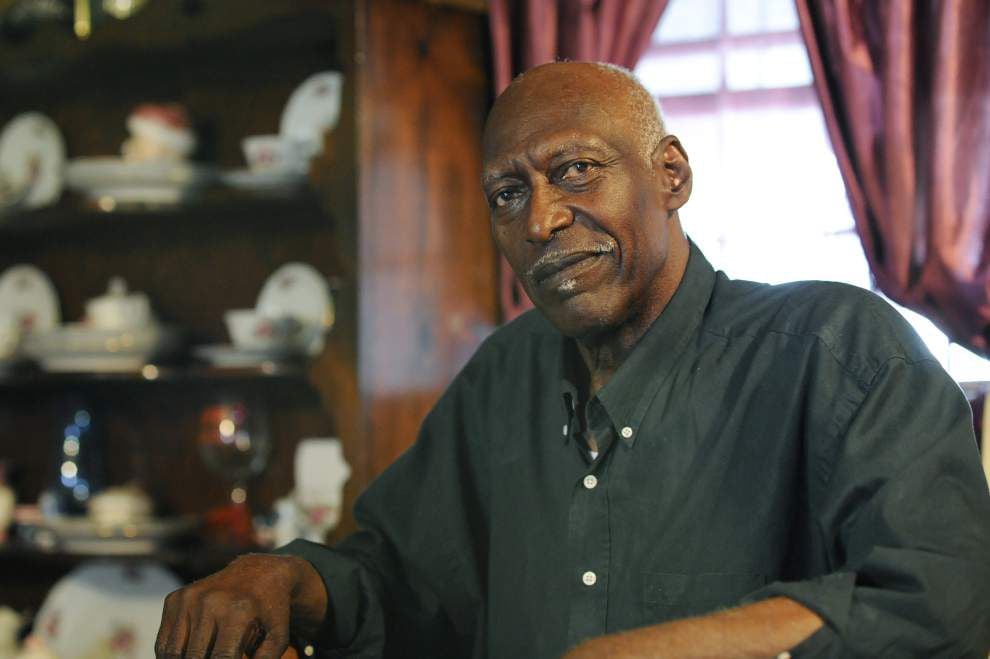 Photo provided by Olivia McClure -- Jackie Hicks stands next to the new National Registry historic marker in front of their former home in Bogalusa. The home was attacked in the 1960s by Klansmen angry that Hicks, a civil rights leader in the city, was housing national CORE organizers.

Photo provided by Olivia McClure -- Barbara Hicks Collins, who organized the movement to get her parents' home on the National Registry, shows pride in the first historic marker in Washington Parish commemorating an African-American. Her father, Robert Hicks, coordinated Civil Rights efforts there in the 1960s and led the 100-mile march to the State Capitol in Baton Rouge in 1967.

Every night for one year during the mid-1960s, Charlie White slept on the roof of a Jonesboro schoolhouse with his gun in hand. Down the road lived civil rights workers targeted by the Ku Klux Klan yet denied protection by local police.

It was a tumultuous time in Louisiana and elsewhere in the South. White, now 73, was a member of the Deacons for Defense and Justice — a little-known group of armed African-Americans who, half a century ago, picked up guns not to stir up violence but to prevent it.

Their small units patrolled Louisiana and southern Mississippi black neighborhoods to deter Klan attacks. They also protected civil rights organizers, especially those from the North, and guarded demonstrations, including the 1967 march from Bogalusa to Baton Rouge.

Never a large organization, only about a dozen former Deacons who can still recall their exploits remain. Notable Deacons chapters formed in Jonesboro, Bogalusa, Natchez and Ferriday in the mid-1960s. Less than a decade later, as FBI pressure on KKK and other violent anti-integration radicals grew and violence subsided, the Deacons for Defense and Justice were relegated to history — their efforts having been given scant mention.

Fed up with being harassed and intimidated by white people, the armed men departed from the nonviolence principles associated with the more mainstream civil rights movement and its leader, Martin Luther King Jr., who refused to visit areas where the Deacons were active, such as Natchez and Bogalusa, for fear of sending the wrong message to the nation.

The Deacons made it known they had weapons, and some drove around with a gun visible on the passenger seat as a warning. They did not advocate black people starting violence to cause social change, say surviving Deacons. Rather, their job was to shoot back if attacked.

Nonviolent workers were reluctant to accept that kind of help but often allowed Deacons to guard them on marches or to bail them out of jail.

“(We) gave the people of nonviolence the hope and protection that they needed to get things done,” said White, who was a founding member.

The thought of armed African-Americans horrified many white Southerners, and the Deacons were arrested or had their weapons confiscated many times. Only rarely were militant segregationists and Klan groups disarmed.

Ironically, the original Jonesboro chapter had roots in the town’s police department, which in 1964 deputized several black men, empowering them to make arrests in black neighborhoods.

One summer night that year, the Jonesboro men came to the rescue of Ronnie Moore, a Congress of Racial Equality worker. Moore, now 74, and fellow worker Mike Lesser left Jonesboro for Monroe. When they noticed two carloads of Klansmen behind them and one in front, Moore turned around and sped back to the Jonesboro Freedom House, headquarters of the local civil rights movement, at 100 miles per hour.

Three of the black policemen were ordered to arrest Moore for reckless driving, but they refused and resigned from the department. They then escorted Moore to Monroe — that incident, Moore says, was the genesis of the Deacons for Defense and Justice.

Surviving Deacons note the name was chosen to garner respect among black people who worried the men were just troublemakers.

“The most important people in the community were the deacons in the church,” White said. “They were people who tried to help people, who done the right thing, people to be looked up to.”

White said Deacons chapters set high standards for personal behavior. The Jonesboro group, for instance, would only admit adults who had a job and were deemed upstanding. White said they believed in doing everything legally, so they applied for — and, surprisingly, received — a charter from the state in 1965. Nevertheless, they were soon investigated by the state Joint Legislative Un-American Activities Committee and the FBI.

The Deacons operated in small towns, where it was not unheard of for policemen to wear Klan robes by night.

“If you can go to court and get justice, you don’t need (the Deacons),” said David Whatley, 68, a Ferriday Deacon who now lives in Baton Rouge.

While there was some shooting between Klan and Deacons groups, there is no record of any deaths. There were close calls, however.

In July 1965, just months after a Deacons group formed in Bogalusa, Deacon Henry Austin unintentionally shot a white heckler on a march, according to Tulane professor Lance Hill, who described the incident in his 2004 book “The Deacons for Defense.” The victim survived. Conflicts broke out in the streets, and Gov. John J. McKeithen ordered state troopers to confiscate all weapons in Bogalusa, even from white people.

“We’re going to run the Deacons out of business, and anybody else that’s got pistols and rifles and shotguns,” McKeithen said then, according to Hill.

Fletcher Anderson, 76, still lives in Bogalusa and was the Deacon there in charge of handing out assignments to others. Every night, men were posted to several locales to watch for Klansmen, talking to one another on short-wave radios.

When nonviolent integration activists protested, armed Deacons would march alongside them. Such protection was extended to Louisiana’s most famous civil rights march, a 10-day trek from Bogalusa to the Capitol in Baton Rouge in summer 1967. With help from junior members in their late teens who did not carry guns but radioed information from picket lines, the Deacons “could get there before it happened and shut it down, if the Klan or some whites were forming up there like they’re doing something or jumping on someone,” Anderson said.

Marvin Austin, 67, was one of those young members and grew up to serve on the Bogalusa City Council. He recalled how the Deacons would often “pop up” when there was a problem. The Klan and police didn’t realize how fast they could move, Austin said.

Natchez Deacon Richard Lee Lewis, 75, said the Bogalusa group “didn’t play,” not even with other black people. When Lewis and four other men decided to form their own group in Natchez, they drove to Bogalusa to find that chapter’s leader. They reached town at 1 a.m. and stopped at a café to get directions.

“Going down the road, next thing we know, the road was blocked with black guys with shotguns and everything,” Lewis said, adding the Bogalusa group eventually helped them set up a Natchez chapter.

There was a chapter across the Mississippi River in Ferriday, as well, which was home of the Silver Dollar Group — one of the most violent documented subgroups of the KKK and whose members were “well-versed in a backward way of living,” Whatley said. Whatley said the Klan tried to bomb his home after he enrolled as the first black student at Ferriday High School in 1966.

Antonne Duncan, 75, a Ferriday Deacon who still lives there, said the civil rights movement created a problem in his town, which was poor and not much more than a sawmill, lumber yards and barrooms. “You really couldn’t fight the whites too hard because you had to make a living through them,” he said. “If you did anything out of order … you probably lost your job.”

The Deacons rose out of that frustrating dilemma. Klansmen, in spite of their cross burnings and rallies, were cowards who were afraid to die, Moore said. The most important contribution of the Deacons, he said, was “equalizing” their threat.

“We kept secrets and were sneaky just like they were,” White said. “They found out (and said), ‘Well OK, we better back up. If we shot over there, they’re going to shoot over here.’ ”

Many Deacons ended up playing other significant roles in their communities. White is chairman of the deacon board at his church, and Anderson helps children with Black History Month assignments for school. Both still consider themselves active Deacons for Defense and Justice.

“It don’t necessarily mean you’d have to take up arms against somebody,” Anderson said. “I’m blessed to be able to still help people. That’s what it was all about, helping people in the beginning to make things better than what they’ve been and make life better for those that have been deprived. That’s our job. … It’s going to continue to be our job until we die.”