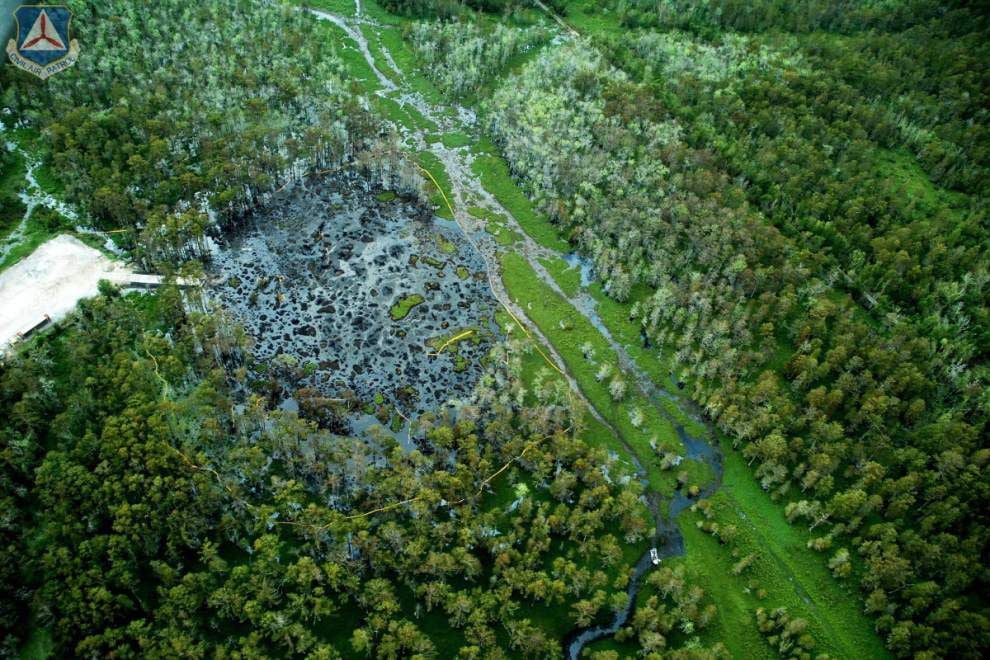 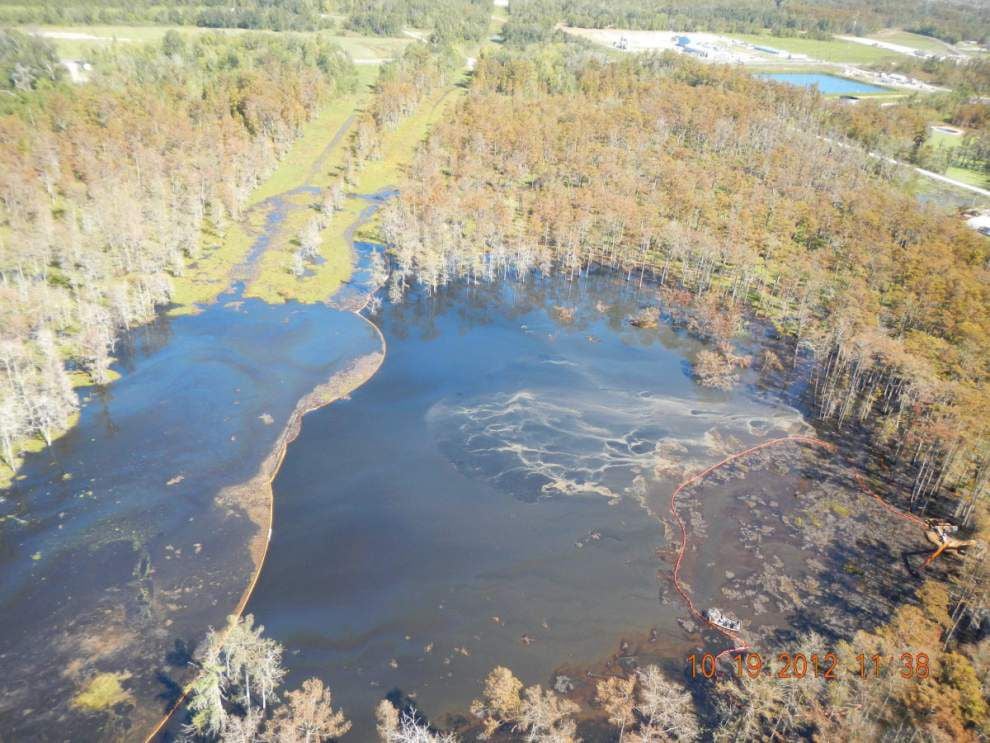 Photo provided by WGBH -- The Bayou Corne sinkhole, seen here in October 2012, will be one of the suibjects of PBS' NOVA installment,, 'Sinkholes-Buried Alive.'

Photo provided by WGBH -- The Bayou Corne sinkhole, seen here in October 2012, will be one of the suibjects of PBS' NOVA installment,, 'Sinkholes-Buried Alive.'

More than four years since the Bayou Corne sinkhole appeared, Assumption Parish officials declared on Friday that the once growing, burping, oily swampland hole that made worldwide headlines had settled down enough to no longer pose a risk to the public.

Parish officials completely lifted the remaining voluntary evacuation orders in last parts of the Bayou Corne community where the few remaining residents had remained, saying risk from instability and seeping, flammable natural gas released in the sinkhole’s formation have been mitigated.

"Through the preponderance of evidence, the area has been deemed no longer at risk due to the sinkhole and gas associated with its creation," parish officials said in a statement.

The order had been coming for months after parish officials in late June significantly dialed back evacuation orders tied to the 34-acre hole, which could resemble any other cypress-lined lake in Louisiana if not for a containment levee and other monitoring and equipment around it.

For a time, the sinkhole grew rapidly, swallowing whole trees, but eventually slowed down considerably and has largely stabilized in recent years. The methane gas released in the sinkhole’s formation, however, remained an ever-present risk to residents.

Texas Brine was deemed the responsible party after one of its underground salt dome caverns had been tied the sinkhole’s formation by state experts. Texas Brine and its insurers bought out much of the Bayou Corne and Grand Bayou communities, and lawsuits began to be filed.

Dennis Landry, who lives with his wife in Bayou Corne and owns vacation cabins and a boat launch in the Sportsman Drive area that had still been under the evacuation order, said he is happy to see the order lifted.

“I can’t speak for everybody here, but I think people are ready. I think they’re ready for that evacuation order to be lifted. I think most of them feel like it’s time, enough time has passed,” Landry said.

Texas Brine, which has pressed for more than year to remove the evacuation orders, welcomed the parish’s decision, saying it was glad to see state and local officials agree with the company that its “response priorities have been satisfied and that the sinkhole does not pose a risk to Bayou Corne.”

Texas Brine officials in their statement reiterated their position that the sinkhole was not their company’s fault.

Still, Landry said, he would like to see Texas Brine continue to monitor the sinkhole. Landry echoed the sentiment of the parish Police Jury, which in August adopted a resolution asking the state Office of Conservation to hold Texas Brine to its previous promises for additional testing and monitoring after the evacuation order was lifted.

But on Friday, Commissioner Richard Ieyoub, after considering the resolution and asking Texas Brine to respond to it, relieved the company of many of its monitoring requirements, agreeing that the company had mitigated the gas risk enough for the remaining populated areas of Bayou Corne.

A few considerably weakened gas bubble sites remain in area waterways and Texas Brine’s own geologic expert says gas removal did not quite hit, but got very close, to the safety standard set by a special state panel. Ieyoub relieved Texas Brine of gas removal duties but required them to monitor wells that had been used to remove the gas but were no longer able to do so.

Patrick Courreges, spokesman for the Office of Conservation and state Department of Natural Resources, said the data show the risk from methane has been minimized to the extent the gas can be practically removed. The swamp area also naturally has gas bubbles.

Ieyoub also relieved Texas Brine of many of the seismic monitoring requirements and of area and indoor air monitoring of resident’s homes for methane and other gases. He also lessened how much the company must monitor for sinkhole water levels, edge collapses and other subsidence, requiring that the company must monitor the top of the sinkhole containment levee until end of 2017.

The state officials are continuing to review company plans for the briney water inside the sinkhole and for surrounding groundwater, another concern of the Police Jury.

Though Texas Brine won’t be complying with many of the Police Jury’s requests, John Boudreaux, parish homeland security director, said the parish moved to lift the order because the state had found the risk had been mitigated and he has to rely on what scientists tell him.

A few months before the sinkhole appeared, Landry was one of the first people to report bubbling water in the Bayou Corne waterway. The reports prompted a more than two-month mystery as state officials grasped for the cause of the bubbles and later unusual underground tremors in the swamp.

A big clue appeared overnight on Aug. 2-3, 2012, on property Texas Brine was leasing and mining on behalf of Occidental Chemical south La. 70.

An approximately 1-acre watery hole, initially called a “slurry hole” by officials who had refused at first to call it a sinkhole, appeared in the swamp near one of Texas Brine’s salt dome mining wells. By the morning of Aug. 3, a pungent oily, earthy flotsam rested on hole’s surface with cypress floating vertically in the water only the tree tops visible.

Over time as the hole expanded and became a “sinkhole,” a more complete picture emerged. Years of pumping fresh water underground to mine salt from the the Napoleonville Dome, a huge salt deposit, had gotten close to the edge of the deposit, state experts said. The supporting salt wall of the one of those mining cavities gave way and surrounding earth and muck flowed into and started filling the cavern, ultimately creating the sinkhole at the surface.

Oil drilling has happened around salt domes throughout Louisiana for decades, but, in the ongoing litigation over the sinkhole, Texas Brine has blamed past oil drilling around the Napoleonville Dome for weakening the salt wall that failed and sparking a sinkhole.

“The cause of this unprecedented event was not initially known, but based on information exposed during the litigation discovery process, Texas Brine now strongly believes that the sinkhole was not the result of its actions, but was the responsibility of others,” the Texas Brine statement said.