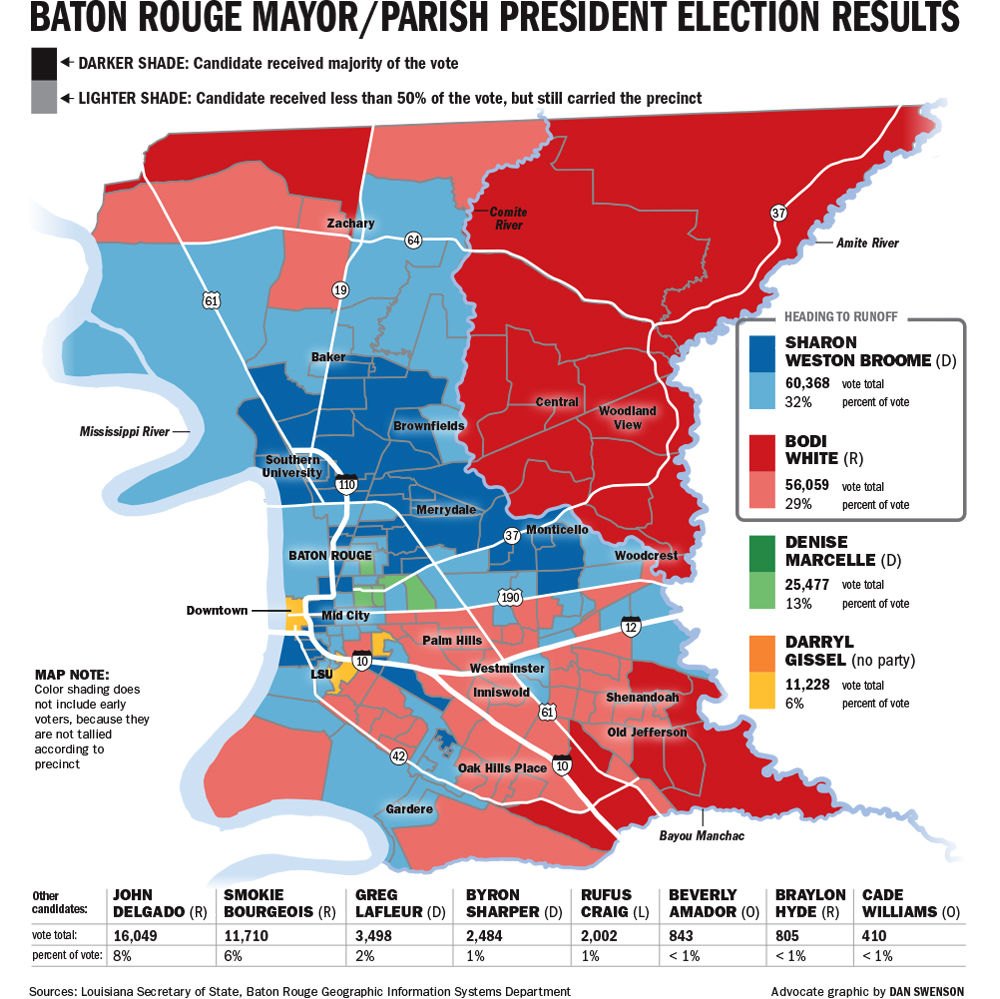 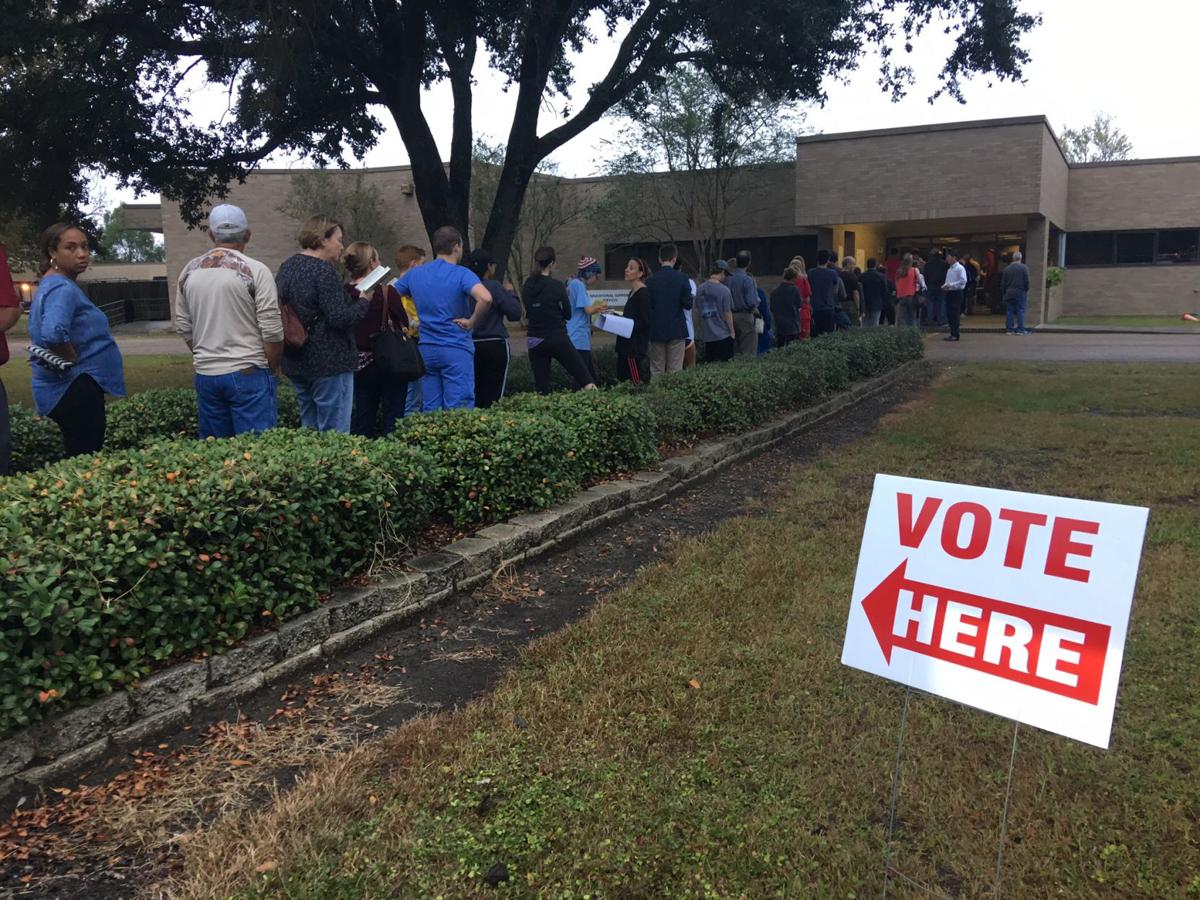 Advocate staff photo by JOHN BALLANCE -- A line forms to vote at the Louisiana School for the Deaf in Baton Rouge on Election Day, Nov. 8, 2016. 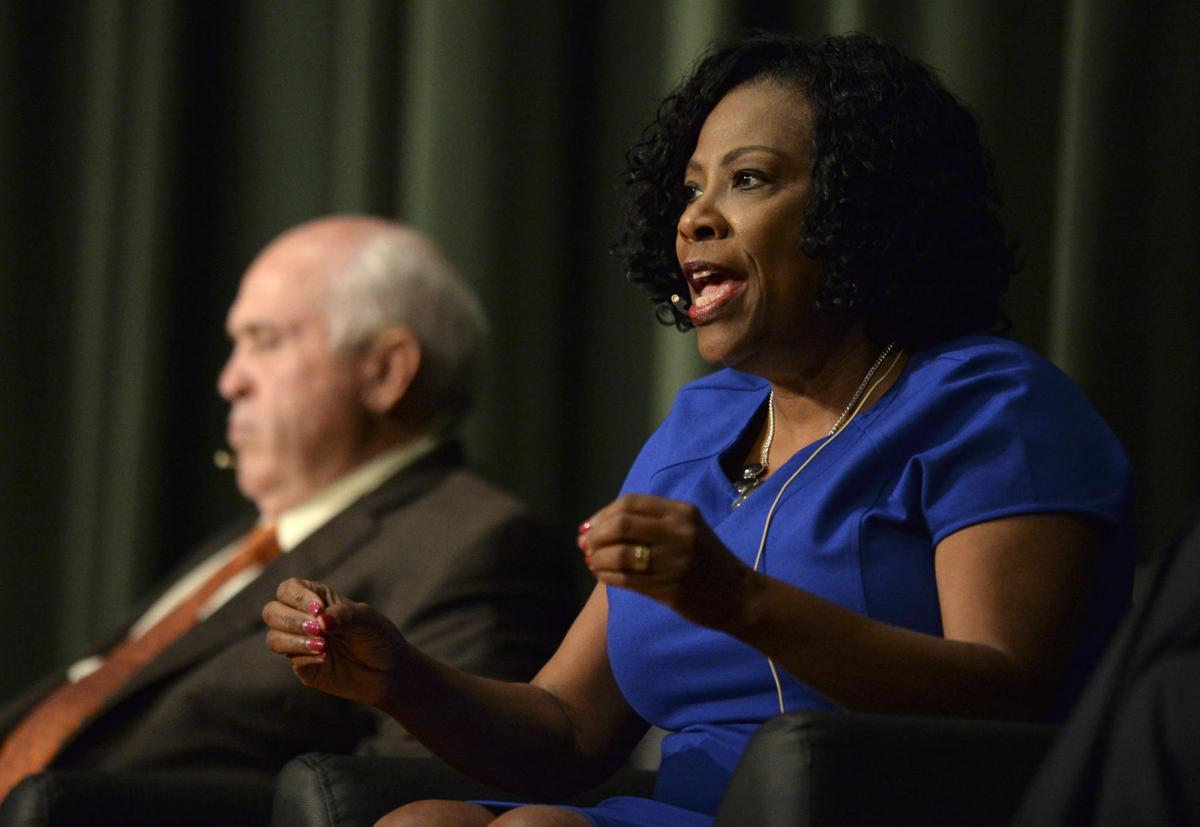 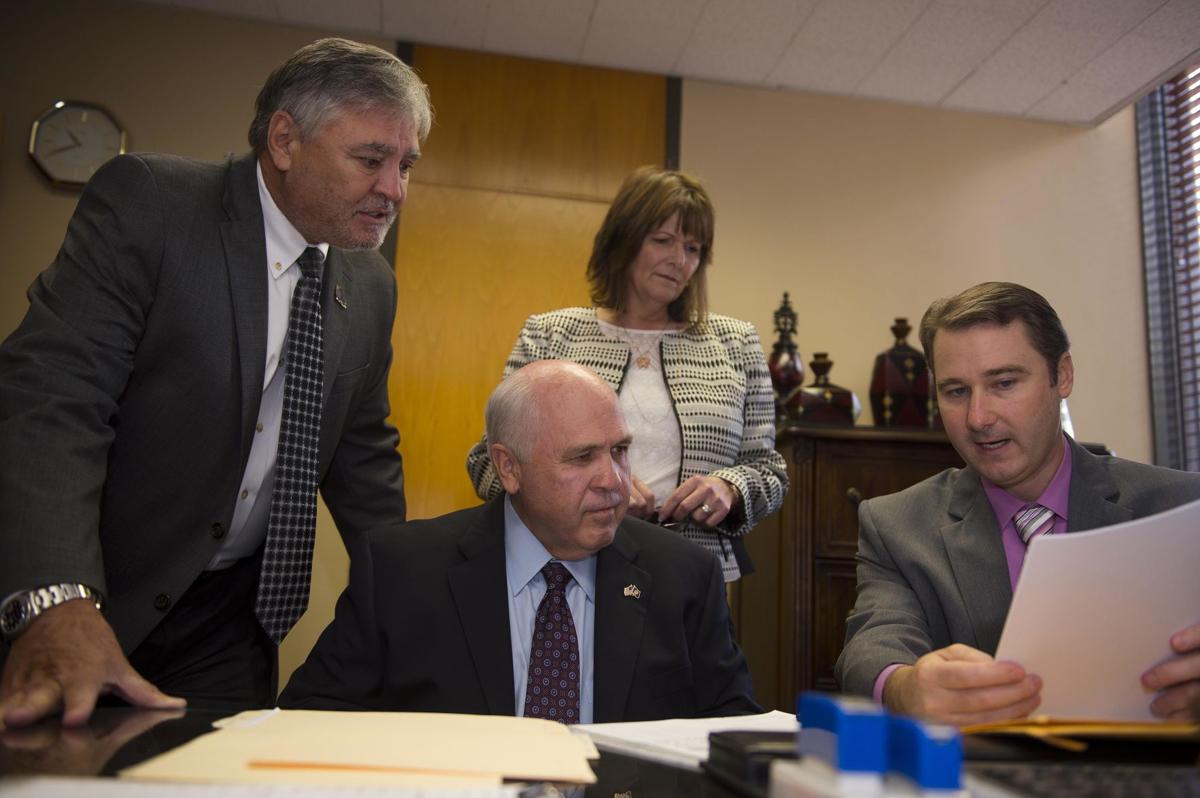 Sen. Bodi White, R-Central, center, is flanked by Clerk of Court Doug Welborn, left, and wife Robin White, center background, as administrator of elections Brandon Abadie, right, explains paperwork to White as he officially signs up for the mayor's race inside City Hall during mayoral qualifying and qualifying for other races Wednesday, July 20, 2016 at the Clerk of Court's Offices in Baton Rouge. 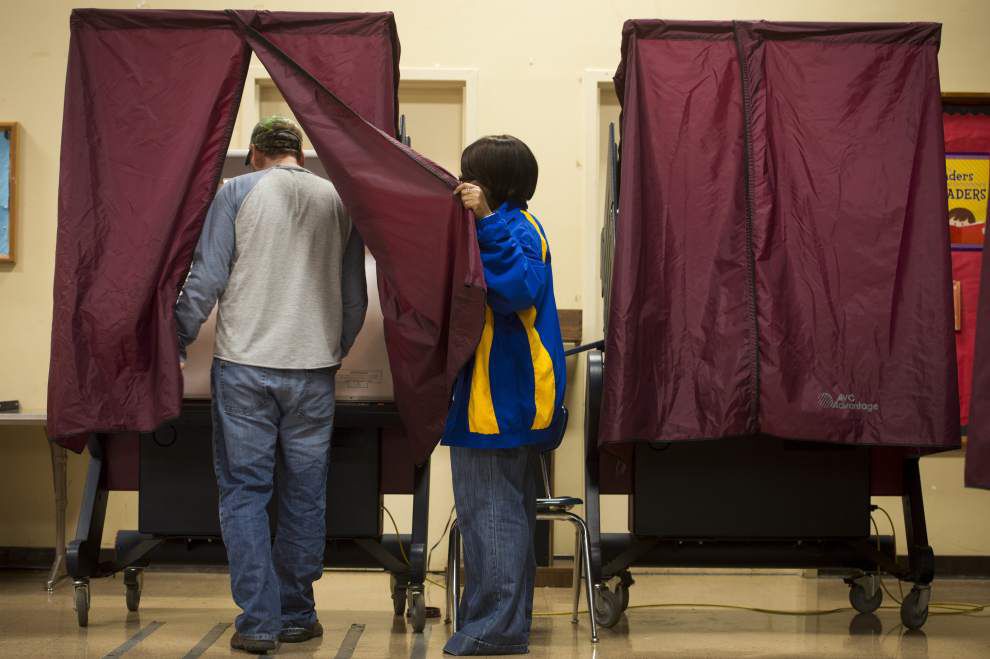 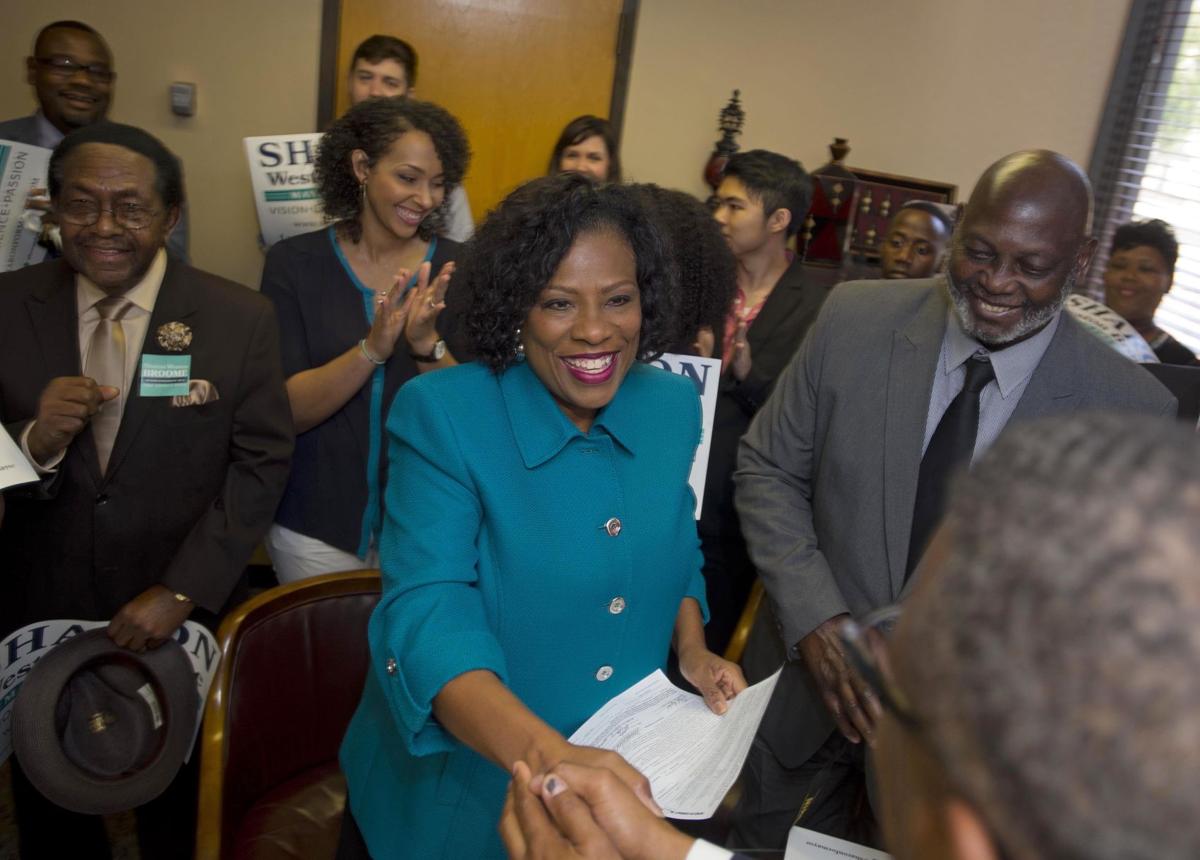 Sen. Sharon Weston Broome, center, leans forward to shake hands with Clerk of Court administrator Jeff Hickerson, foreground, inside City Hall during mayoral qualifying and qualifying for other races Wednesday, July 20, 2016, at the Clerk of Court's Offices in Baton Rouge. Others with her, from left, include Willie Hawkins, her daughter, Sarah Parker, and husband Marvin Broome. 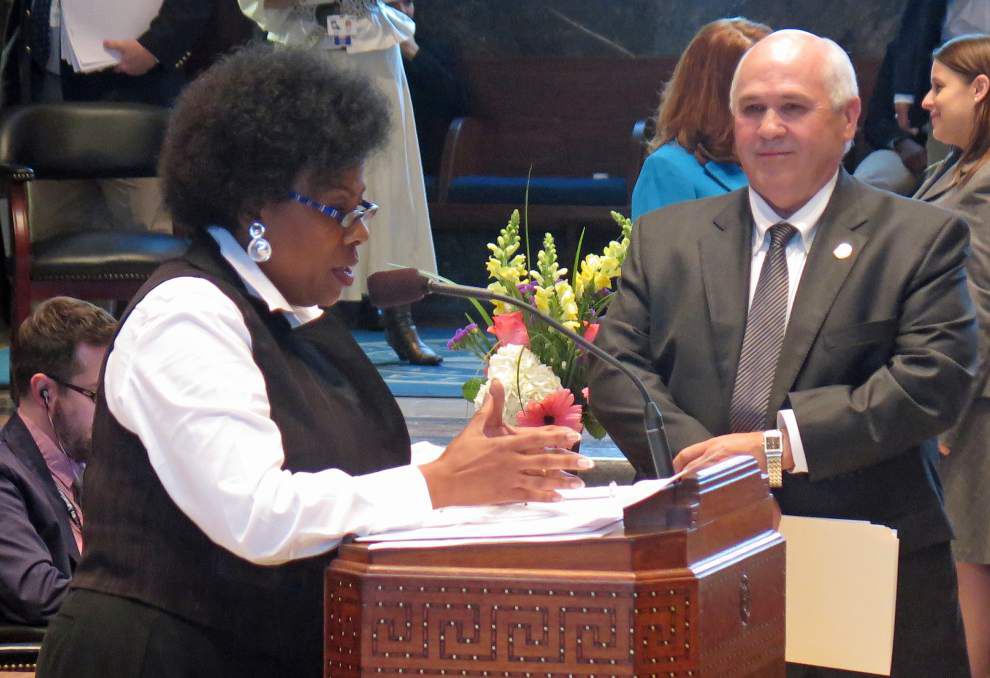 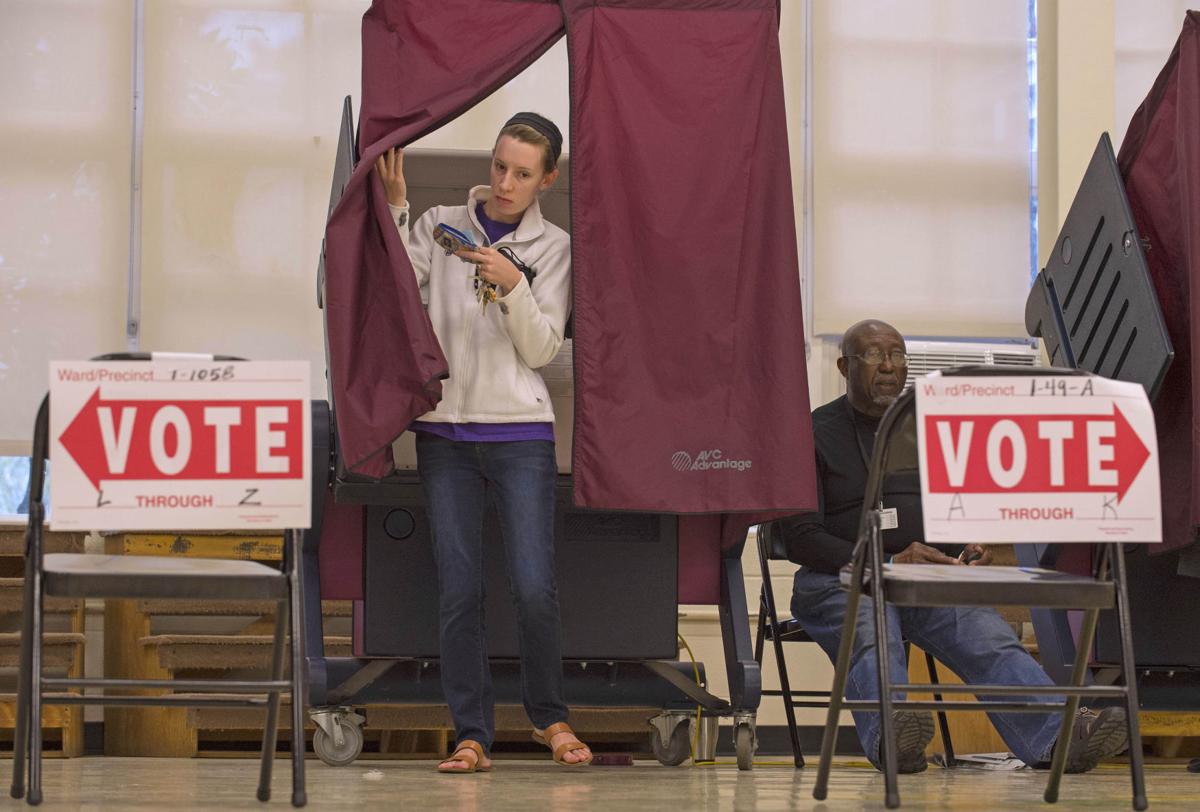 Jordan Gasperecz-McMills exits the booth after voting, as election commissioner Owen Cope, right, looks on during voting at Lasalle Elementary School on Nov. 8, 2016. 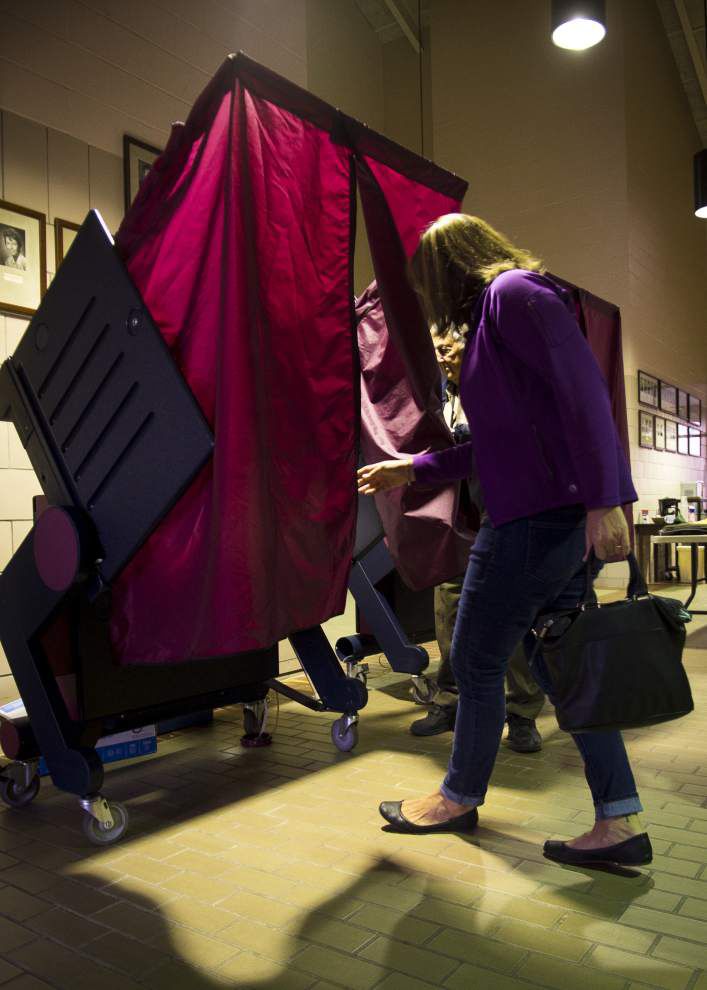 Advocate staff photo by JOHN BALLANCE -- A line forms to vote at the Louisiana School for the Deaf in Baton Rouge on Election Day, Nov. 8, 2016.

Sen. Bodi White, R-Central, center, is flanked by Clerk of Court Doug Welborn, left, and wife Robin White, center background, as administrator of elections Brandon Abadie, right, explains paperwork to White as he officially signs up for the mayor's race inside City Hall during mayoral qualifying and qualifying for other races Wednesday, July 20, 2016 at the Clerk of Court's Offices in Baton Rouge.

Sen. Sharon Weston Broome, center, leans forward to shake hands with Clerk of Court administrator Jeff Hickerson, foreground, inside City Hall during mayoral qualifying and qualifying for other races Wednesday, July 20, 2016, at the Clerk of Court's Offices in Baton Rouge. Others with her, from left, include Willie Hawkins, her daughter, Sarah Parker, and husband Marvin Broome.

Jordan Gasperecz-McMills exits the booth after voting, as election commissioner Owen Cope, right, looks on during voting at Lasalle Elementary School on Nov. 8, 2016.

Baton Rouge mayoral candidates Sharon Weston Broome and Bodi White advanced to a runoff Tuesday thanks in large part to voters in the home bases they've represented for years. But to be victorious next month, analysts say they will need to branch out and charm others in less familiar areas like downtown and LSU.

These two contenders breaking through to the mayor-president runoff didn't surprise longtime observers of the race, given that Broome, a Democrat, is a former state senator and White, a Republican, is a sitting state senator. Their name recognition and veteran political backgrounds in East Baton Rouge Parish helped them stand out among a crowded field of 12 candidates, as Broome finished with 32 percent of the vote and White followed with 29 percent.

White ran strongest in Central and had a solid showing in the southeast of the parish. Voters in North Baton Rouge, Baker and Old South Baton Rouge strongly backed Broome. But in some pockets around the parish, other candidates saw more support.

Pollster and president of JMC Enterprises of Louisiana John Couvillon sees the subset of votes that Gissel won, just more than 11,000, as potentially the most interesting in the runoff. Gissel ran unaffiliated with any party and finished with 6 percent of the vote, carrying three precincts of mostly well-educated and wealthy voters.

"You're talking about a more moderate constituency that supported Gissel, and they literally hold the balance of power in the runoff," Couvillon said.

Neither Gissel nor the other contenders in the primary election have endorsed a candidate in the Dec. 10 runoff. He, Marcelle and Delgado said they will meet with White and Broome before deciding whether to endorse.

Broome can expect to largely pick up the votes that went to the other Democrats in the race, Couvillon said. In the primary, Broome, Marcelle, Greg LaFleur and Byron Sharper's vote totals combined to 48 percent of the vote.

He said White should draw in voters who cast ballots for Bourgeois and Delgado, both Republicans, although Delgado framed himself as more progressive than White. Their combined vote totals in the primary gave Republicans 43 percent of the vote.

Couvillon and LSU political communication professor Martin Johnson both gave Broome a slight edge going into the runoff, but both said the race is still a tossup. Voter turnout will make or break the runoff election, they said.

Southern University political scientist Albert Samuels said it will be especially important for Broome to try to preserve the vote that went to Marcelle, given that she was able to carry precincts. Marcelle is often to the left of Broome on issues and her base of voters could need to be energized to support Broome.

Broome said she is not taking any voters for granted. But she said she was excited to finish in first place in the primary, especially after being outspent by White's campaign.

"Our message and our strategy aren't going to change because the voters responded very well to our message," Broome said, as she has frequently spoken of everyone in Baton Rouge rising and falling together. "I'm delighted that the pollsters think that I have the edge, but for me, the ultimate poll is always on Election Day."

Couvillon said it's particularly important for White to run a nonpartisan campaign that steers clear of ideological issues, which is his best appeal to the so-called Gissel voters.

Registered voters in the parish are nearly half Democrats, and a quarter each Republicans and other affiliations, such as not registering with a party. East Baton Rouge Parish voters are also split 52-44 white and black, respectively.

"You look at Bodi's ad campaign, he prominently features African Americans, so he's not conceding that vote," Samuels said.

White said his support in the primary was where he pegged it to be, and that he will spend the next few weeks reaching out to people in neighborhoods he was unable to hit in the primary.

"Everybody's fired up," White said. "This country always rights itself and this community rights itself. I'm going to be a mayor-president that represents every part of it."

Turnout could be a problem for both candidates, as the analysts say it's almost certain to drop from the heights it reached on Tuesday when mayoral candidates shared a ballot with President-elect Donald Trump and Hillary Clinton. But the analysts agreed that the electorate now will likely be more attuned to the mayoral race without competition from the presidential campaign.

Mayoral candidate Bodi White: 'If I didn't think I could fix it, I wouldn't be running'

East Baton Rouge lacks a recent precedent to predict how voter turnout could change next month. Outgoing Mayor-President Kip Holden won both his re-election bids in the first round of voting, and the election calendar was different when he initially won in 2004. Recent elections for other offices have seen voter turnout drop-offs between November and December, though the number of percentage points varies on which office is being sought.

During the 2014 U.S. Senate race between incumbent Mary Landrieu and eventual victor Bill Cassidy, turnout in the parish dropped about six percentage points between the November and December elections. East Baton Rouge Parish turnout was at 148,000 votes in November, and fell to to 131,000 in December, perhaps a big enough dip to be a difference maker in a mayoral election.

In November 2012, with Barack Obama and Mitt Romney in the marquee presidential match-up, 187,000 East Baton Rouge voters cast a ballot in a state Supreme Court race eventually won by Jeff Hughes. The next month, only 57,000 came back — only 18 percent of the electorate and less than a third of the November turnout.

White and Broome both said turnout will be a priority and one of the strongest messages for their campaigns over the next few weeks.

The other area that campaigns will need to work on is messaging, the analysts suggested.

How popular is Donald Trump in Louisiana? President-elect landed highest number of votes ever

It would serve Broome well to talk about her vision for Baton Rouge and what she has accomplished as a longtime political leader, Couvillon said. For his part, Samuels recommended that Broome explain how she will help voters in north Baton Rouge, where voters have become increasingly disenchanted with Holden.

Johnson said Broome needs to try to replicate Holden's diverse coalition of supporters across the parish, but still contrast herself against the sitting mayor for those who are frustrated with him. "She's got to explain those differences so that she can both capitalize on his political coalition while at the same time, giving them the confidence that she's not going to be him," Johnson said. "And that's a tough message."

They said she should could make an effective attack on White's past involvement in the St. George incorporation movement. White has repeatedly said he only pushed for a separate school system in the southeast part of the parish because he was trying to represent his constituents and that he did not support the movement to create the city. White also said he would not support the new city movement if it is revived.

But he came under attack in the primaries for his legislative record on trying to create the St. George school systems and a transition district, and Samuels said it would be "political malpractice" for Broome not to make an issue out of it.

On the other hand, Couvillon said White's messaging of traffic, crime and education -- all featured in television ads -- has been good, and that his appeal to Gissel voters needs to be his ability to be an effective manager.

Couvillon said White can ding Broome on her long political career, while Johnson said he could turn a variation of the St. George issue against Broome by asking if she will snub outlying parts of the parish.

Democratic mayor-President candidate Sharon Weston Broome is promising to keep her campaign positive as she heads toward the Dec. 10 runoff el…

After spending much of the election cycle criticizing him, going so far as to register the website BodiWhiteLies.com, vanquished mayor-preside…

In the Dec. 10 runoff election, voters will choose a new senator from Louisiana, a new Baton Rouge mayor and more.

During the first mayoral debate since the field narrowed to two candidates, the most significant individual may not have been Republican Bodi …

Computers, guns and hoses: Here's how technology helped save BR during summer of crisis

Warren Kron stood in front of a map of East Baton Rouge splattered in green. Each dot represents a person who had called for rescue during the…

Not a single cash-throwing monkey has appeared on TV so far.

More than $1 million has been raised to elect Republican Bodi White as East Baton Rouge Parish's next mayor-president, nearly twice the amount…

State Rep. C. Denise Marcelle, who ran to the left of Democrat Sharon Weston Broome in the mayor-president primary and finished in third place…

Over Sharon Weston Broome's two decades in the state Legislature, she developed an interest in children and families, victims of domestic viol…