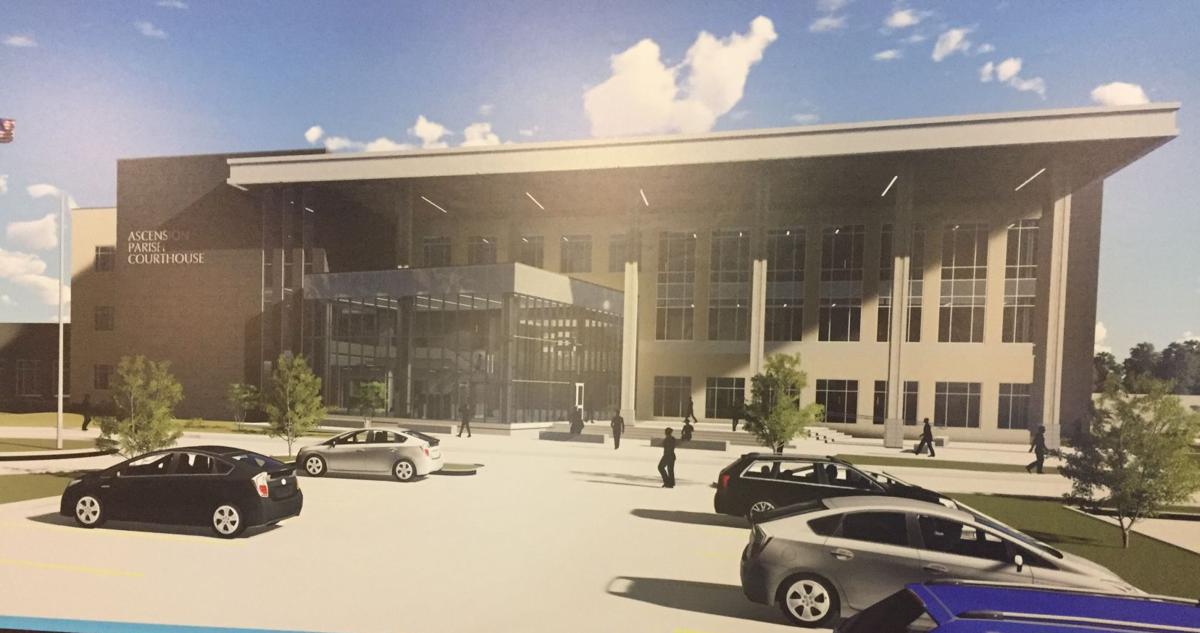 This architectural rendering displayed for the Ascension Parish Council Thursday, May 2, 2019, shows the modern styling of the new three-story parish courthouse planned in Gonzales. With a design that echoes the parish Governmental Complex next-door, the 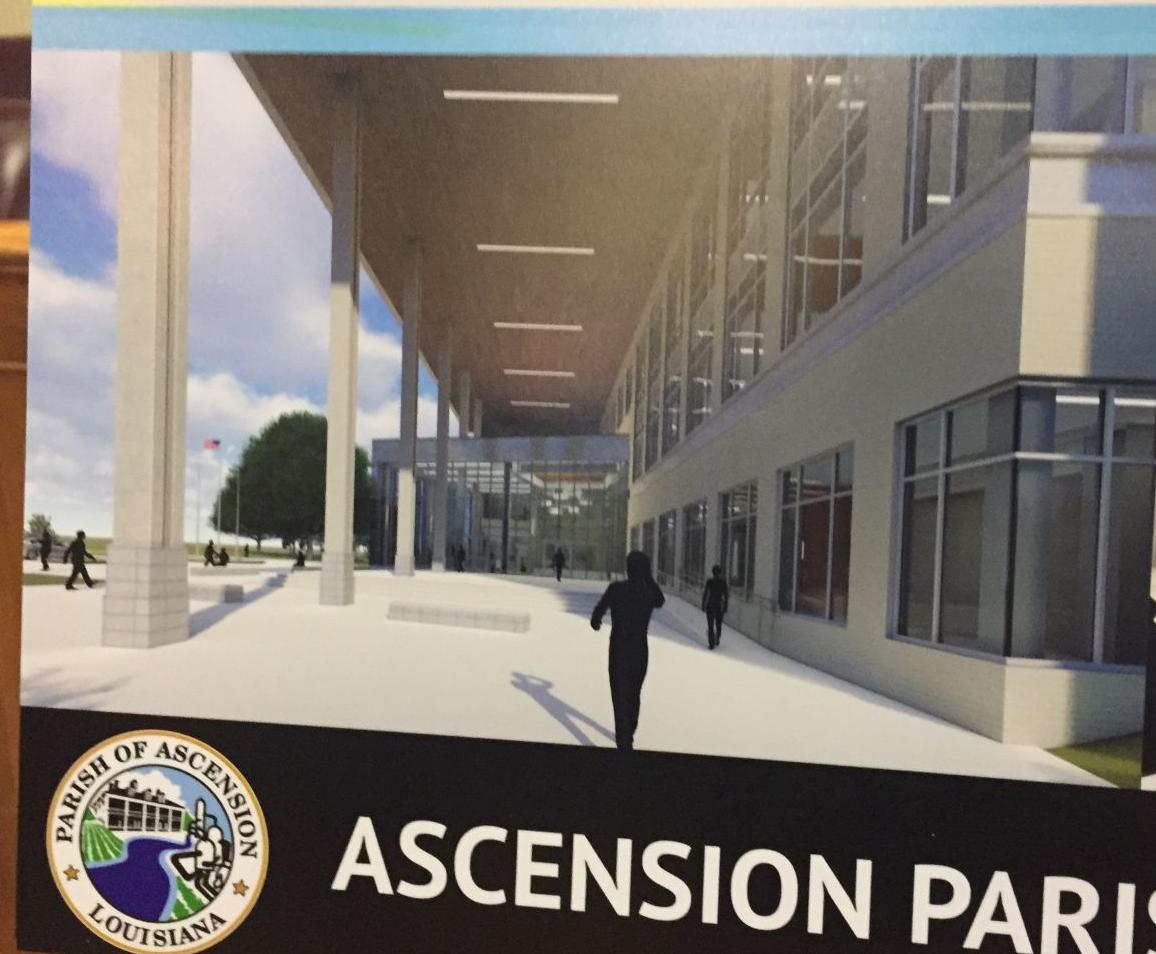 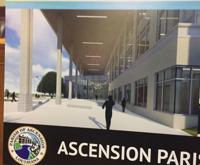 This architectural rendering displayed for the Ascension Parish Council Thursday, May 2, 2019, shows the modern styling of the new three-story parish courthouse planned in Gonzales. With a design that echoes the parish Governmental Complex next-door, the future building will have a construction cost of $27.4 million and total project will cost $29.6 million, new estimates say.

This architectural rendering displayed for the Ascension Parish Council Thursday, May 2, 2019, shows the modern styling of the new three-story parish courthouse planned in Gonzales. With a design that echoes the parish Governmental Complex next-door, the

This architectural rendering displayed for the Ascension Parish Council Thursday, May 2, 2019, shows the modern styling of the new three-story parish courthouse planned in Gonzales. With a design that echoes the parish Governmental Complex next-door, the future building will have a construction cost of $27.4 million and total project will cost $29.6 million, new estimates say.

Before the first shovel of dirt has been dug, the future $29.6 million Ascension Parish courthouse proposed for Gonzales is already $4.6 million over budget.

The cost estimate for design, engineering and construction of the three-story courthouse is at least 18 percent higher than what parish officials had hoped two years ago. The judges, Clerk of Court's Office and Sheriff's Office have agreed to cover the difference out of their own funds.

Clerk of Court Bridget Hanna, who relies on self-generated fees, is covering the bulk of the cost overrun at $3.2 million.

The parish originally incurred $25 million in bonded debt for the project, to be repaid from a $150 increase in fees for lawsuits and $30 increase for other civil court filings.

The Legislature approved the fee increases in 2017, but court officials said this week that as they got into the design of the building, the cost was much higher than the $20 million to $25 million an initial feasibility study estimated. That study was the basis of the project's financing.

GONZALES — The judges of the 23rd Judicial District and other court officials are eyeing a new Ascension Parish Courthouse, saying overcrowdin…

The more than 90,000-square foot building will have eight courtrooms and cost an estimated $27.4 million to build. As a cost-saving measure, only seven courtrooms will be fully finished and trimmed out, Hanna said.

Parish government won't pay for the building's construction, court officials said, but will take ownership responsibility after it is built on East Worthey Street next to the parish Governmental Complex.

At the urging of the judges, the clerk of court and the sheriff, parish government agreed to pursue $25 million in new debt in 2017 to finance the building. Court officials said then that demands from an increasing docket and troubling security concerns at the 16-year-old Courthouse Annex in Gonzales required a new building.

One of the major worries has been that the Courthouse Annex on South Irma Boulevard doesn't have a way to sequester prisoners easily and separate them from the judges and other court personnel, all of whom must use the same back hallways to enter the courtrooms.

Judge Jason Verdigets said court officials tried to model the Ascension courthouse on Livingston's and it is actually smaller than the courthouse in the town of Livingston.

"It was just total building prices as things go up," Verdigets said.

The latest construction estimate of $27.4 million came after trimming about $1 million in costs off the bid from builder The Lemoine Co., but another $2.1 million in engineering, architectural, testing and management fees bring the total cost to $29.6 million.

Gasper Chifici, the courthouse project manager, suggested the early estimate was too low, noting that architect GraceHebert, which has experience designing courthouses, told parish officials from the start that the building couldn't be built for $25 million.

"I think had the original price been reasonably correct, I think it would be about where we are," said Chifici, who became project manager after the feasibility study and finance deal were completed.

Mike Rice, vice-president of The Lemoine Co., said he could not speak to the past feasibility study but noted all owners start with a number.

"I would think through the final design of everything, they found some things that they need to have and found ways to pay for it and the final budget was ($27.4 million)," Rice said.

After more than a decade of planning and nearly two years of construction, the new Livingston Parish courthouse soon will open its doors for b…

Earlier this decade, parish officials in Livingston ran into similar problems with the total cost of their 110,000-square foot courthouse north of Interstate 12. The building came in about $3.2 million more than the $17.2 million debt that parish had taken out for the new courthouse. The local government agencies involved in that project also had to split the overage but also made up some of the extra cost with sales tax savings on materials purchases.

Judge recuses himself from Matassa's bribery case, cites work with him on new courthouse

The significantly higher cost for the Ascension courthouse only emerged in public Thursday as court officials were before the Parish Council seeking approval for a maximum construction price of $27.9 million.

The courthouse project has been designed and will be built through a process known as "construction management at risk," in which the architect and contractor work together from the start. The builder agrees to a maximum price upfront.

The $27.9 million maximum price has a built-in contingency that could be returned to the government agencies if it isn't needed.

Parish Council members had few questions about the increased costs but were in a more congratulatory mood as their vote to back the maximum construction price and for a related agreement with the court officials set the stage for construction to start.

Later, after the necessary votes, the court officials and council members posed for a photograph in front of the new courthouse renderings, which rested on an easel in the council chambers at the historic red brick Parish Courthouse in Donaldsonville, Ascension's west bank courthouse.

One area of focus from the council Thursday were the future east bank courthouse's drainage impacts in Gonzales. The building will go up near East Ascension High School, an existing Clerk of Court building, the parish Governmental Complex and medical offices.

Chifici, the project manager, explained to Councilmen Bill Dawson and Daniel "Doc" Satterlee that a drainage study found that the fill used to raise the bottom floor of the courthouse will be offset by a large, existing pond that is part of the future courthouse property.

Chifici said the pond will be excavated to hold more water. The pond and other drainage works have been shown to improve drainage in the area up through a 100-year rainstorm, he said.

Drainage around the courthouse has been a point of concern since last summer. East Ascension Drainage Chairman Dempsey Lambert, who is also a parish councilman, had linked the future courthouse with a delay in new rules that would limit how much dirt can be used to raise homes and businesses, even when the flooding-effects of added dirt is counteracted with detention ponds.

Lambert said then that the courthouse, which will be near a small ditch, may have to be raised up on dirt more than 3 feet high.

But Chifici said Thursday the studies now show the courthouse will need dirt piled, on average, no more than 1.8 feet high, though some lower areas could require more.

At that height, he said, the courthouse will be level with East Worthey and the adjacent parish Governmental Complex. Chifici said that after agreements are signed and some initial planning happens, demolition and dirt work could begin soon.

GONZALES — Facing public pressure to address the effects of the August 2016 flood, the Ascension Parish Council will expand limits on the use …