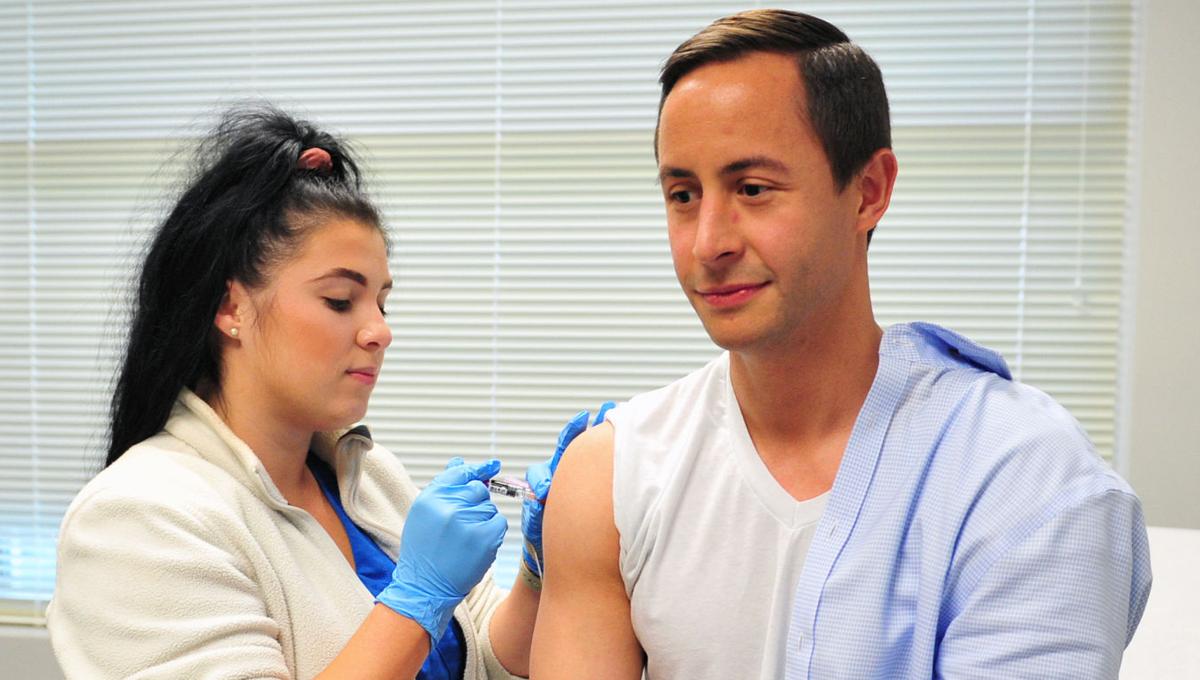 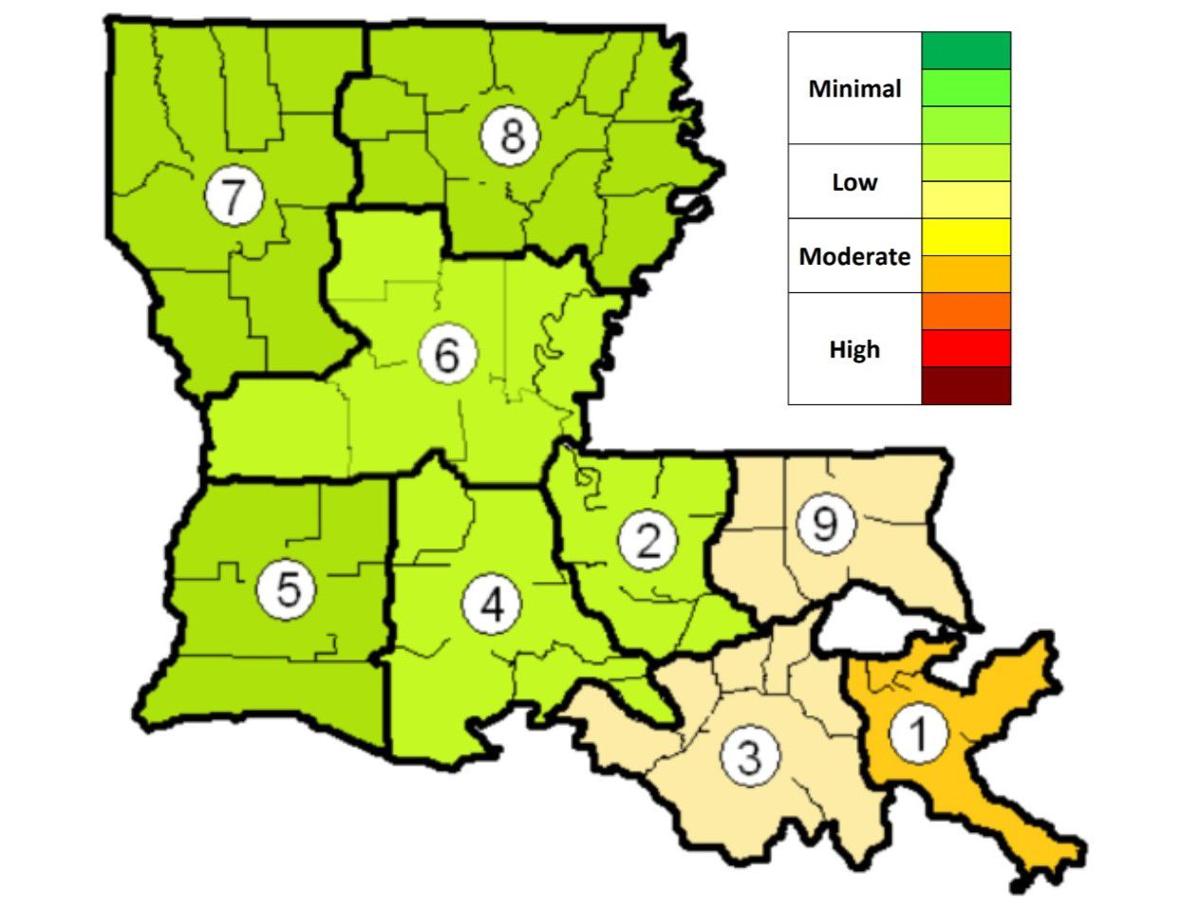 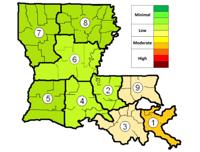 Louisiana flu-like illness activity as of Oct. 12, 2019, according to the Louisiana Department of Health, which supplied the map. 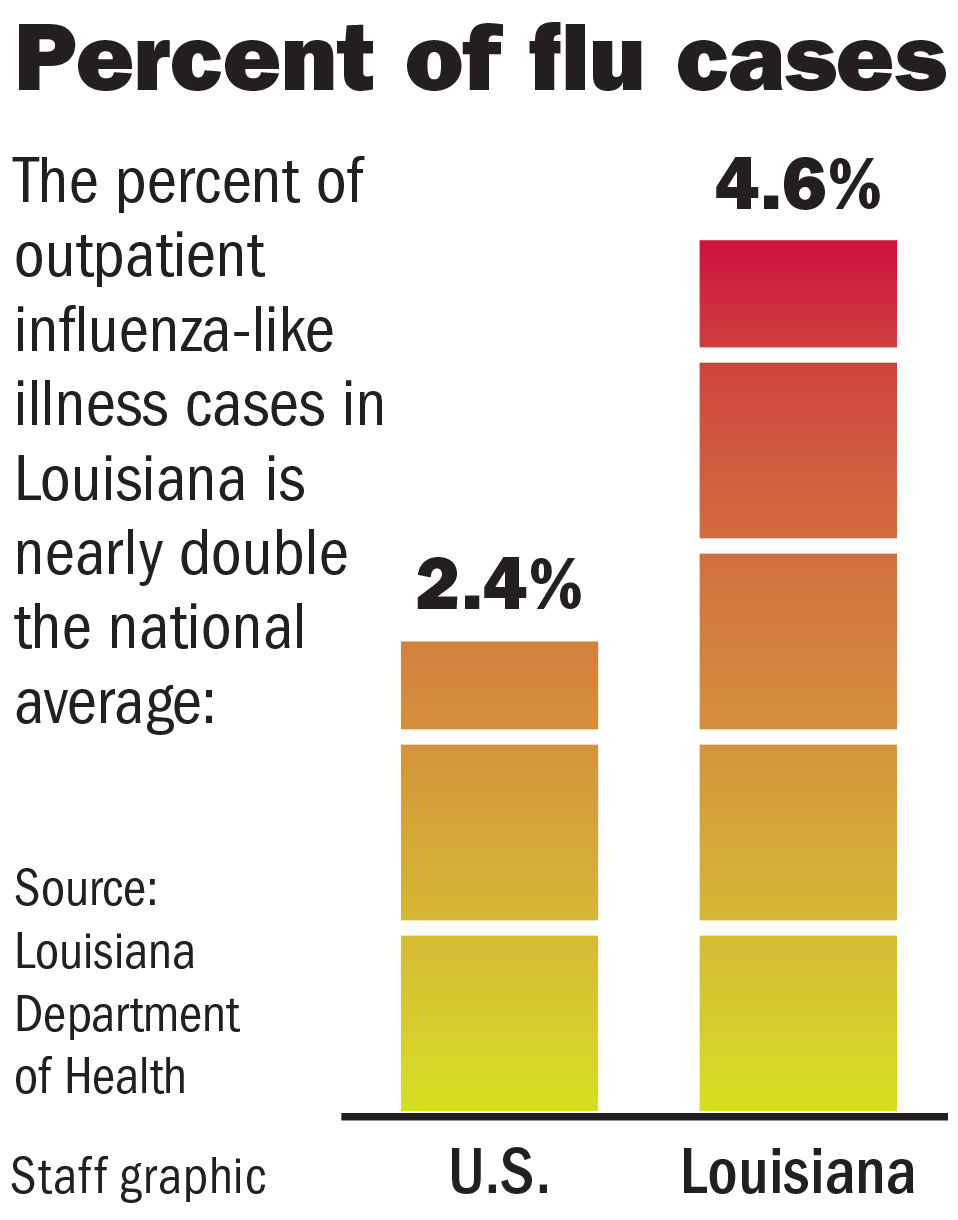 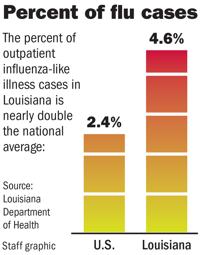 Flu-like illnesses spreading in the southeastern corner of Louisiana have made the state the worst nationally just two weeks into the 2019-20 influenza season. While health officials aren't sure the early spike is an indication of a bad season to come, the figures are bad enough to raise concern.

According to the Centers for Disease Control and Prevention in Atlanta, only Louisiana ranks high in influenza-like activity. Data collected for the week ending Oct. 12, the most recent data available, show other states with only low or minimal flu activity.

The New Orleans metro area and points south were listed in the data as having the most activity in Louisiana, followed by the Florida Parishes east of the Amite River and in coastal areas generally south of a line from Jeanerette to Lake Maurepas. The rest of the state showed minimal activity.

The number of influenza-like cases in Louisiana so far this year exceeds a regional baseline and also is above figures from each of the previous five years.

That metric does not measure confirmed flu cases, but rather “influenza-like illness” which is a commonly-used phrase medical facilities use to track cases of patients whose symptoms mirror the flu, such as a fever at or above 100 degrees, body aches, congestion and a cough. It ranks states on a scale from “minimal/low” to “high” based on how many influenza-like illness case visits occur as compared to weeks with little to no flu activity.

The national baseline is 2.4% of outpatient cases recorded as influenza-like illness, and in the most recently recorded week, Louisiana’s outpatient number stood at 4.6%. The CDC rates Louisiana's flu cases as regionally spread, while cases remain locally spread in California, Kentucky and Nevada. Other states show that cases are sporadic or non-existent.

“We seem to be really at the forefront of the flu season this year,” said Louisiana Department of Health assistant secretary for the office of public health Dr. Alex Billioux. “It certainly is hitting Louisiana a bit earlier than it normally would.”

Billioux said usually temperatures need to drop before the onslaught of flu season patients begin showing up to clinics, but a cluster of cases in Orleans Parish that has put Louisiana in the higher-ranking flu activity bracket could be throwing off the numbers. He said it’s possible that area could be a quick spread of illness between a certain group of people in close proximity, or it could be that the flu season is making its start there, but that hasn't been determined.

According to LDH data, the 2018-19 year was a four-year high where the peak of activity in late February saw roughly 12 percent of outpatient visits due to flu-like illness. Billioux said an estimated 1,400 Louisiana deaths could be attributed to the flu last year, and an additional 14,000 patients went to a hospital for flu-like illness treatment.

In the week ending Oct. 12, data show that 2,319 patients sought medical treatment for their flu-like illness in Louisiana.

Ochsner Health Center-Denham Springs nurse practitioner Angelle Bush said there have been multiple confirmed flu cases at the Livingston Parish clinic so far this flu season with some coming in prior to the official flu season’s start.

Bush estimated that last week alone she saw four patients who tested positive for both A and B strains of the virus.

She said the CDC numbers on Louisiana are alarming given it’s so early in the flu season, but that doesn’t necessarily mean it’s only getting worse from here. The season can peak and dip until the official end in the spring, but they’ve driven home the importance of getting flu shots to many patients.

“I believe these numbers are kind of scaring everything so they’re trying to be proactive,” she said. “(Our staff) has been very busy with the vaccines, and we’re offering patients the vaccines around the clock.”

Our Lady of the Lake family practice and sports medicine physician Rani Whitfield, based in Baton Rouge, agreed, saying anecdotally there seemed to be a higher number of patients requesting a flu shot. Even still, he said the CDC’s most recent data on Louisiana has clinicians bracing for a possible spike as the weather gets cooler and the holidays bring large groups of people into confined spaces.

“The numbers were a little shocking to me… I think we’re going to see a surge a little later in the year,” he said.

According to CDC historical data, the 2008-09 season is the only other in the last 10 years in which any state has recorded a high flu-like activity level like Louisiana is seeing now. During that year, five southern states — Louisiana included — ranked at the highest level on the scale, and since then it’s been rare for a state to even make it to the “moderate” bracket.