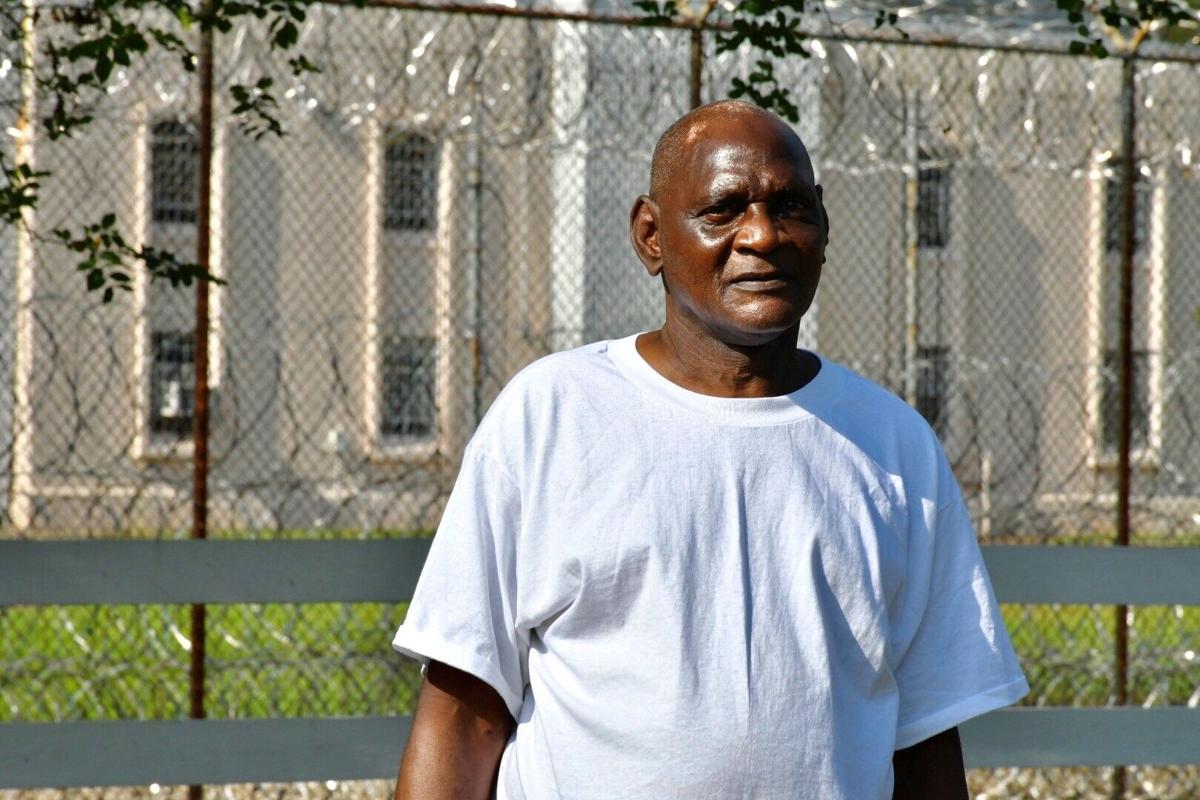 Fair Wayne Bryant, 63, stands outside the fences of Angola prison late Thursday afternoon, his first taste of freedom in 24 years after the Louisiana parole board granted his release during a hearing that morning. He was sentenced to life as a habitual offender for stealing hedge clippers in 1997. 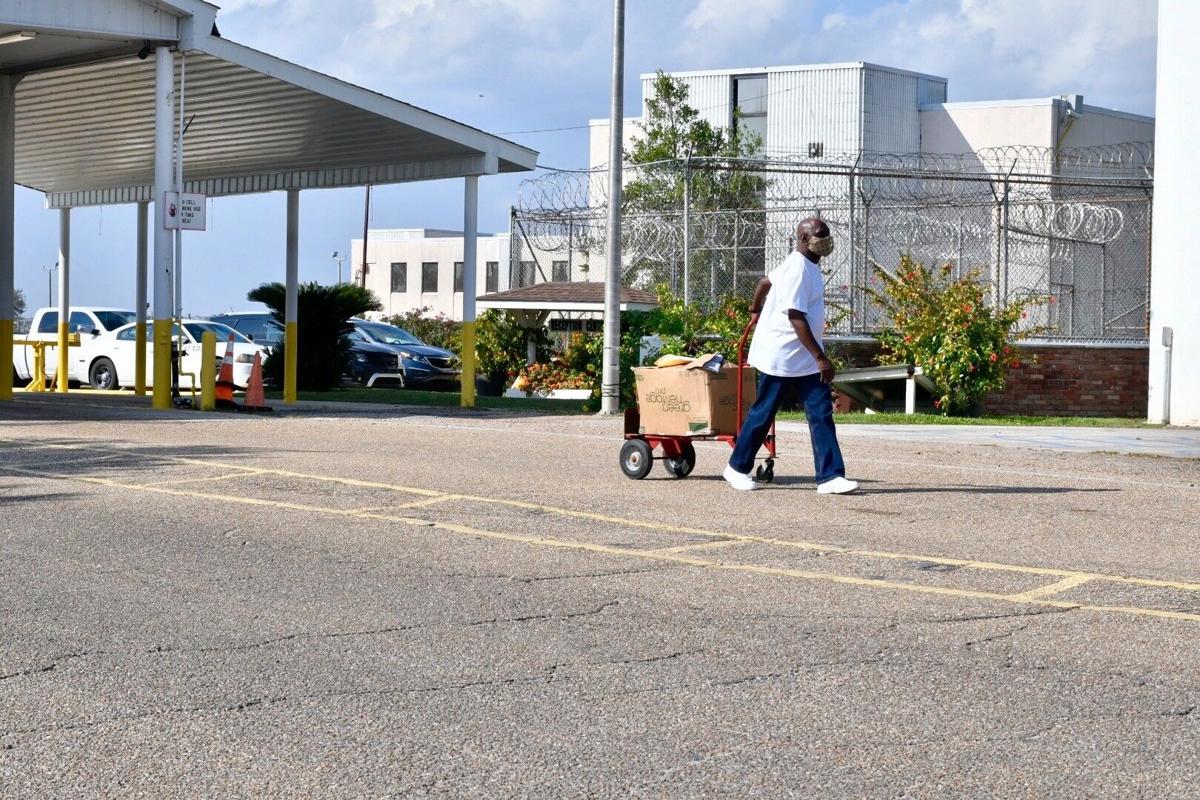 Fair Wayne Bryant, 63, walks out the gates of Angola prison late Thursday afternoon, his first taste of freedom in 24 years after the Louisiana parole board granted his release during a hearing that morning. He was sentenced to life as a habitual offender for stealing hedge clippers in 1997.

Fair Wayne Bryant, 63, stands outside the fences of Angola prison late Thursday afternoon, his first taste of freedom in 24 years after the Louisiana parole board granted his release during a hearing that morning. He was sentenced to life as a habitual offender for stealing hedge clippers in 1997.

Fair Wayne Bryant, 63, walks out the gates of Angola prison late Thursday afternoon, his first taste of freedom in 24 years after the Louisiana parole board granted his release during a hearing that morning. He was sentenced to life as a habitual offender for stealing hedge clippers in 1997.

A lot has changed since Fair Wayne Bryant was sentenced to spend the rest of his life in prison for stealing a pair of hedge clippers more than two decades ago.

For starters, the Louisiana Legislature decided to tweak the state's habitual offender law, which lets prosecutors request enhanced sentences for defendants with substantial criminal records. That change is ultimately what allowed Bryant to regain his freedom following a parole hearing Thursday morning in Baton Rouge.

The parole board's decision to grant his release came just a few months after the state Supreme Court denied a request to review Bryant's sentence, which he argued was excessive and unconstitutional. The majority of judges didn't comment, but the ruling came with a scathing dissent from Chief Justice Bernette Johnson, who said the imposition of life imprisonment was grossly disproportionate to the crime of "unsuccessfully attempting to make off with somebody else's hedge clippers."

Johnson compared Bryant's case to the so-called "pig laws" enacted following Reconstruction, which were designed to target poor Black people for crimes of poverty such as stealing swine. "This case demonstrates their modern manifestation: harsh habitual offender laws that permit a life sentence for a Black man convicted of property crimes," Johnson wrote.

She also noted that Louisiana taxpayers have already spent over $500,000 on Bryant's incarceration since the start of his life sentence. He spent most of that time at the Louisiana State Penitentiary at Angola, the state's sprawling maximum security prison named for the old slave plantation upon which it was constructed.

Johnson isn't alone in calling for reforms to the criminal justice system. The Louisiana Legislature passed a series of bipartisan reforms in 2017 aimed at reducing the state's incarceration rate, which nonetheless remains the highest in the nation, and even President Donald Trump signed into law the First Step Act in 2018. Among other things, the federal legislation eliminated a "three strikes" provision similar to the state statute responsible for Bryant's life sentence.

After state lawmakers passed historic criminal justice reforms in 2017, Gov. John Bel Edwards was quick to celebrate another achievement that …

When Bryant was convicted in the 1997 Caddo Parish hedge clippers case, the Louisiana habitual offender law applied to even minor convictions — such as simple burglary of a toolshed, which allowed prosecutors to obtain the life sentence. Now the law requires more serious and violent offenses to meet that threshold.

Bryant had a long criminal record of relatively minor crimes, including four prior felony convictions. Just one of those was considered violent: an attempted armed robbery conviction in 1979.

Members of the parole board acknowledged during the hearing Thursday that his past crimes stemmed from his struggles with drug addiction, which went largely untreated and unaddressed even as Bryant cycled repeatedly through Louisiana's criminal justice system.

"There's no question in my mind that your heart and head are in the right place," board member Tony Marabella told Bryant before announcing his vote to grant parole. "We just want you to remain clean and sober. We don't want you to come back."

The two other board members also voted to grant Bryant's parole, saying they believe he's older and wiser now than during his last stint in the outside world. Bryant turned 63 in August. He recounted for the board a list of programs he's completed at Angola, including substance abuse counseling.

"That made me aware that I did have a problem with drugs and that I needed some help," he told the board, speaking via video conference from Angola. "I've had 24 years to recognize that problem and be in constant conversation with the Lord to help me with that problem."

Bryant's previous prison sentences were much shorter, but two decades is a long time to face your demons and change your perspective, said Bob Lancaster, an LSU law professor who directs the law school's Parole and Reentry Clinic and who represented Bryant before the board. Bryant said he hopes to eventually live with his brother in Shreveport and help support his children and grandchildren.

Some tension arose during the hearing when Marabella asked Bryant about his history of addiction, and Bryant responded that he doesn't consider himself a drug addict anymore because he has been clean for years.

"You think you're cured?" asked Marabella, a former East Baton Rouge drug court judge who pushed Bryant to think about how he will cope with challenges once released. "You are a drug addict and you will have to continue to be vigilant."

This wasn't his first time before the parole board. The board denied his request for release just last year, citing a 2018 prison disciplinary infraction for getting caught with a cigarette, his only writeup in the past five years. Bryant said he quit smoking after that, realizing the habit was "not more important than my freedom."

Bryant was released Thursday afternoon, a few hours after the parole hearing. He walked through the gates of Angola with one big cardboard box, his smile concealed behind a mask.

Soon after learning the news, Sister Helen Prejean, a renowned criminal justice reform activist from New Orleans, proclaimed her happiness on Twitter. She had previously condemned the Supreme Court decision upholding his sentence and called on white Americans to "join people of color in their long-suffering, righteous struggle for justice."

Bryant has been accepted into the Louisiana Parole Project, a Baton Rouge nonprofit that provides support services like housing and job placement to inmates released from Louisiana prisons and reentering society after decades behind bars. The program has an almost perfect track record of helping its participants avoid committing additional crimes following their release.

"This is about mass incarceration and the policies that got us here. Because people like Mr. Bryant, who needed treatment long ago, were instead given life in prison," said Kerry Myers, the program's deputy director. "The parole board's decision brings some equity and common sense back into the system."

However, he said Louisiana's continued reliance on life without parole sentences leaves ample room for improvement. Many states, including Louisiana's Southern neighbors, allow parole eligibility for most lifers after 20 or 30 years. But here, all life sentences come without parole. The only way around that is through legislative changes or the occasional overturned conviction or clemency award — all exceedingly rare occurrences and unlikely outcomes for the roughly 4,500 people now serving life in Louisiana prisons.

Bryant left Angola behind on Thursday, but he's still considered a lifer. His release on parole means he will continue to serve his life sentence on the outside. Any missteps could land him back in prison.

Henry Smith walks past rows of kennels housing hundreds of Baton Rouge's lost and abandoned dogs. Some dogs poke their noses through the bars …

Of the 249 Louisiana inmates considered for furlough from prison as the coronavirus spreads behind bars, only 53 have been approved for early …