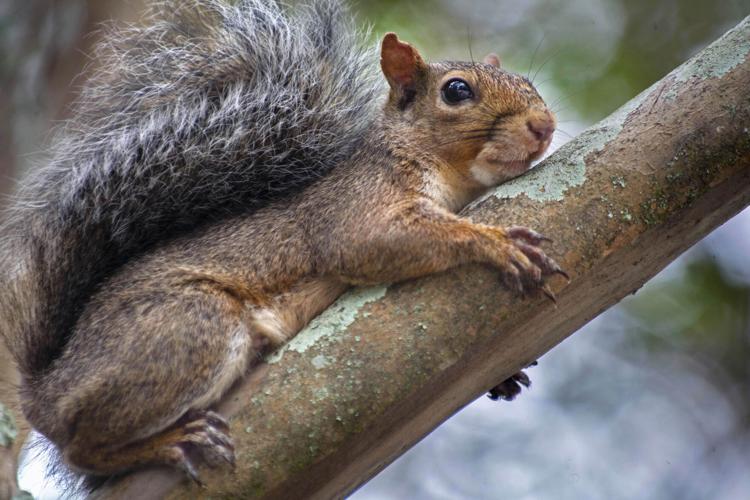 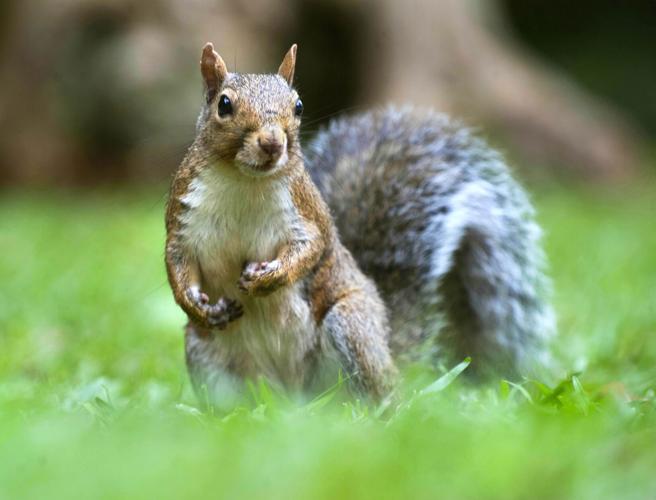 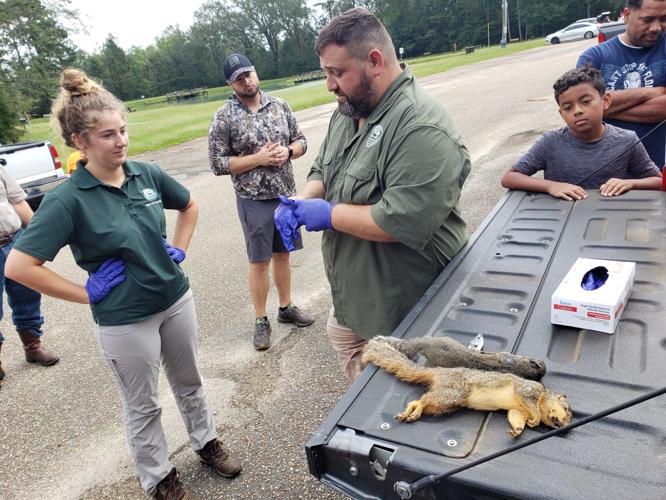 Kacie Rome (left) and Travis Dufour (right), both of the Louisiana Department of Wildlife and Fisheries, prepare to show a group of about 15 students at a Squirrel Hunting 101 seminar on Sept. 18, 2021, how to skin the critters. 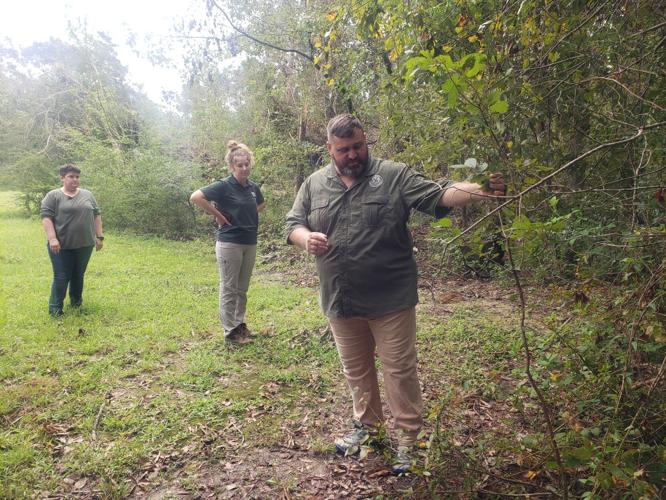 Kacie Rome (left) and Travis Dufour (right), both of the Louisiana Department of Wildlife and Fisheries, prepare to show a group of about 15 students at a Squirrel Hunting 101 seminar on Sept. 18, 2021, how to skin the critters.

Travis Dufour treads through the woods looking for signs, overhead and underfoot.

He scans the ground for nut husks, acorn caps, fresh cuttings; the canopies, for the bend of a branch, the rustle of leaves.

“Here we go,” he says, pausing to pick something up from the forest floor. “This is a pretty good clue that squirrels were here.”

It’s a pinecone, chewed to the core.

“People eat pine nuts, they’re pretty good,” he tells the procession of 15-or-so people trailing him through the forest. “And squirrels like them just the same.”

Same for other morsels he points out along the trek: dewberries, blackberries, syrup-sweet muscadine.

Find such a bounty “and you’ll know that’s prime squirrel territory,” he adds. On a hunt, that’s where he might back up several yards, post up by a tree and wait for the kill.

Ahead of Saturday’s kickoff to squirrel season, Dufour brought no shotgun to the Louisiana Department of Wildlife and Fisheries Squirrel Hunting 101 seminar, hosted at Waddill Wildlife Refuge in Baton Rouge. Instead, he came armed with knowledge from a lifetime of hunting and nearly 20 years as an LDWF biologist.

“The great thing about squirrel hunting,” he tells his pupils, “is the simplicity behind it.”

Because they’re plentiful and easy to find, Dufour notes, squirrels are ideal “gateway” prey for hunters to sharpen their skills for bigger game. Since they’re incredibly prolific, breeding pretty much throughout the year, there’s little risk of over-harvesting.

They’re also delicious, Dufour says. The pink meat is more densely textured and delicate tasting than a rabbit’s — not at all gamey.

It takes on some of the flavor of what it’s been eating: hickory nuts, pecans, the occasional nest egg. (This kind of alimental osmosis is good reason to stick to hunting forest squirrels instead of their city-dwelling cousins, whose diet might consist of dumpster pizza and gutter scraps.)

“Sometimes you can tell if they’ve been feeding on cypress balls,” Dufour says, “and you get that pitch, that kinda tar taste in there.”

Whether smothered and sauced, boiled in gumbo or simmered in burgoo, squirrel meat, he says, is a treat.

And after generations of declining popularity in Louisiana, Dufour hopes it can make a comeback.

'Recovery a marathon, not a sprint'; fall fishing spots will be limited

Except for power and water restoration for some, recovery for thousands more across southeast Louisiana appears to be weeks, months, maybe a y…

The recent weekend workshop — which began in a classroom and ended with some out-in-the-field squirrel scouting — marked the third such seminar Dufour hosted since launching it as many years ago with LDWF Hunting Heritage Coordinator John Sturgis, who retired a short time later.

“We started talking about doing a course to promote hunting for people who maybe got out of it or never got into it,” Dufour says. “For a lot of people, it’s a way to keep alive a tradition they grew up with but never passed on to their own kids.”

Indeed, the Squirrel Hunting 101 class consisted mostly of father-son and grandfather-grandson duos. One couple brought their daughter, 12-year-old aspiring naturalist Hope Sims, who took a cue from Dufour by rattling off names of various flora and fauna during the post-lecture walk through the woods.

“That,” she says, pointing to a burrowed mound of mud, “is a crawfish hole. They say you can lure them out with a hotdog.”

Elsewhere, she identifies a squirrel nest, an arrowwood leaf and — after almost running into its expansive yellow-tinged web — a golden-silk orb weaver, damn-near the size of a small bird.

Dufour traces his lifelong love of nature directly to his first squirrel hunts around the age of 6 or 7. He says those outings with his dad on public land by the family home in Avoyelles Parish taught him firearm safety.

He learned how to be still, patient and quiet. “Don’t drag your feet when you’re walking through the woods — I remember being told that pretty regularly back then,” he says with a laugh.

He learned names of trees, shrubs, bugs and other critters. He learned the value of conservation.

“Squirrels were some of the first game I hunted,” he says. “So, I cut my teeth with that, grew an appreciation for the outdoors.”

It’s a familiar story in the Sportsman’s Paradise, where hunting for gray and fox squirrels — for many people, especially in rural parishes — is something of a rite of passage.

In Ville Platte, the start of squirrel season is an ersatz holiday.

Every year, on the first Saturday of October, the town of 7,500 in Evangeline Parish — a 75-mile northward jaunt from Baton Rouge — empties out for “Squirrel Day,” or “Cajun Passover,” as families leave en masse for the woods.

Field & Stream Magazine once noted how football games for Evangeline Parish high schools get bumped to Thursday because no one would show up if it took place on the Friday before Squirrel Day. Even teachers would play hooky.

After enough Squirrel Day eves with half the students and much of the faculty not showing up, schools in the 1960s and ‘70s began calling off class on that date altogether.

Now, because of the money saved from not having to hire substitute teachers, the Friday before squirrel season is called Budget Day on the official academic calendar.

Skin in the game

There’s more than one way to skin a squirrel.

Dufour prefers “the two-person method” and generally starts by slicing below the base of the tail, which he demonstrates toward the end of his recent seminar.

Using the tailgate of his gray LDWF pickup as a makeshift butcher block, he whips out a couple thawed carcasses that had been frozen since he bagged them during spring squirrel season.

He slips his hands into purple latex gloves, pulls out a pocketknife and asks Waddill Wildlife Refuge biologist Kacie Rome to hold one of the squirrels by its hind legs.

“The worst part is the fur,” he cautions. “It gets everywhere.”

After several forceful slices with the tip of the pocketknife, he sets the blade back on the tailgate.

She firms her grip on the squirrel haunches. Dufour starts peeling the skin — slowly, carefully — up and over the critter’s head, like he’s pulling it out of a tight turtleneck.

The younger attendees are transfixed by the gore. They grimace and giggle when the guts pop out.

There’s no cooking demo, but Dufour offers a few more prep tips while waxing poetic about some of his favorite squirrel recipes: stew, spaghetti, dumplings, fried to a crisp, drowned in gravy.

As for the hunt, he says the best firearm is a matter of preference, really. “Find something that fits you right,” Dufour says, noting that he prefers a 28-gauge shotgun.

Get a basic license, he says, and laminate it so it doesn’t get wet. Pack bug spray, a flashlight, some water, a knife.

Though it’s not required, Dufour suggests donning a bright orange vest — squirrels are colorblind, so it won’t register in their vision but it will help other hunters see you. Because, he says, “a good hunt is one where you get back safely.”

Then, head to a treeline to try your luck.

In the capital region, Dufour suggests Sherburne, a 44,000-acre wildlife management area between the Atchafalaya River and East Protection Guide Levee. But the state boasts 2.6 million acres of public land, he says, and LDWF offers a bunch of maps online for folks to look up where to hunt without getting in anyone’s way.

“Find yourself a sweet pecan tree, find some cuttings — you don’t have to do a lot of scouting,” he says. “I’ve had some of the best hunts in woodlots no bigger than 10, 12 acres.”

Louisiana lets you bag eight squirrels a day from October through February, three a day for the few-week spring season in May. Possession limit: 24 and nine, respectively.

Other than that, it’s hard to go wrong.

Louisiana's economy is not growing as expected, here's how employers are coping

It's been two weeks since the film production Shawn Bohte was working on wrapped, and he's back searching for a new job in the New Orleans area.