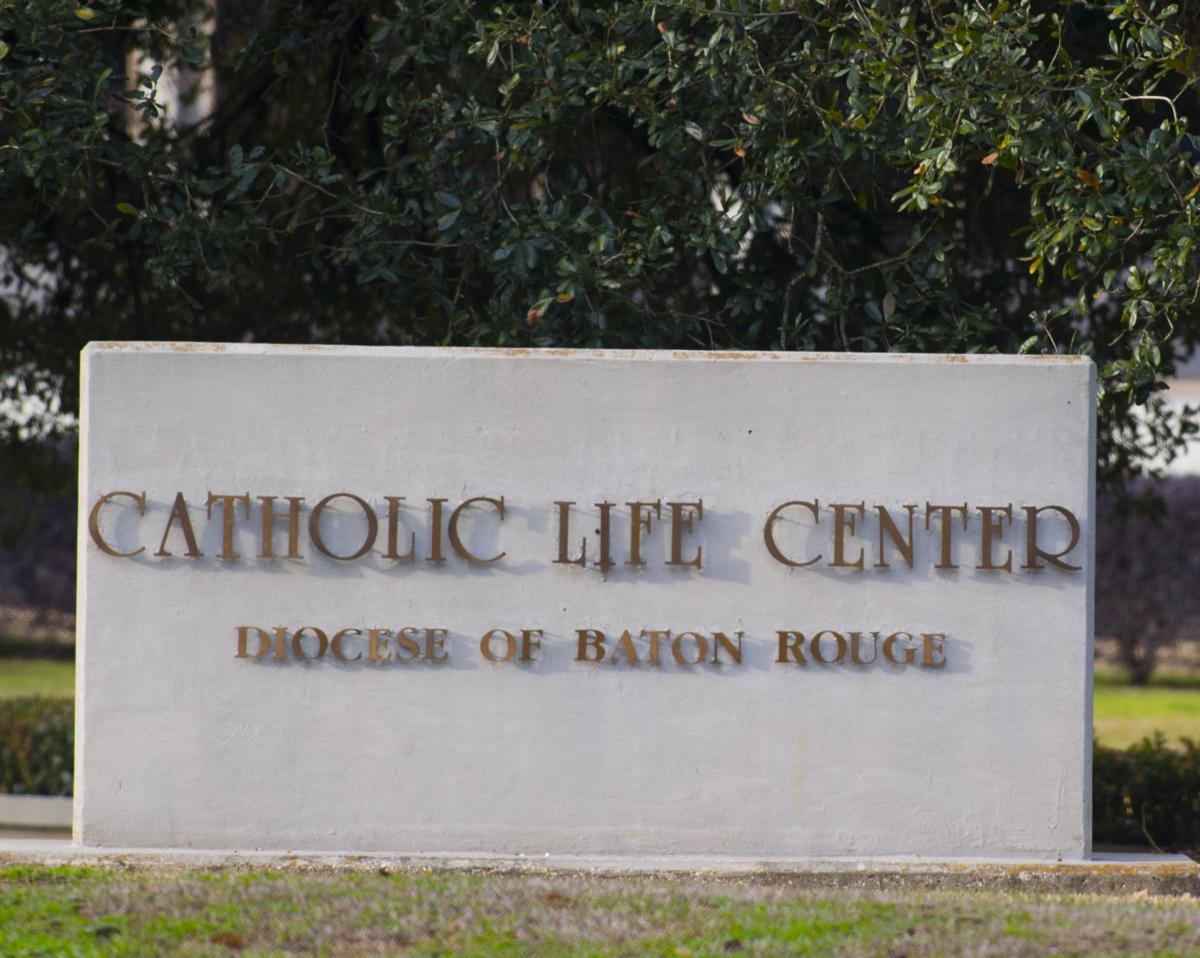 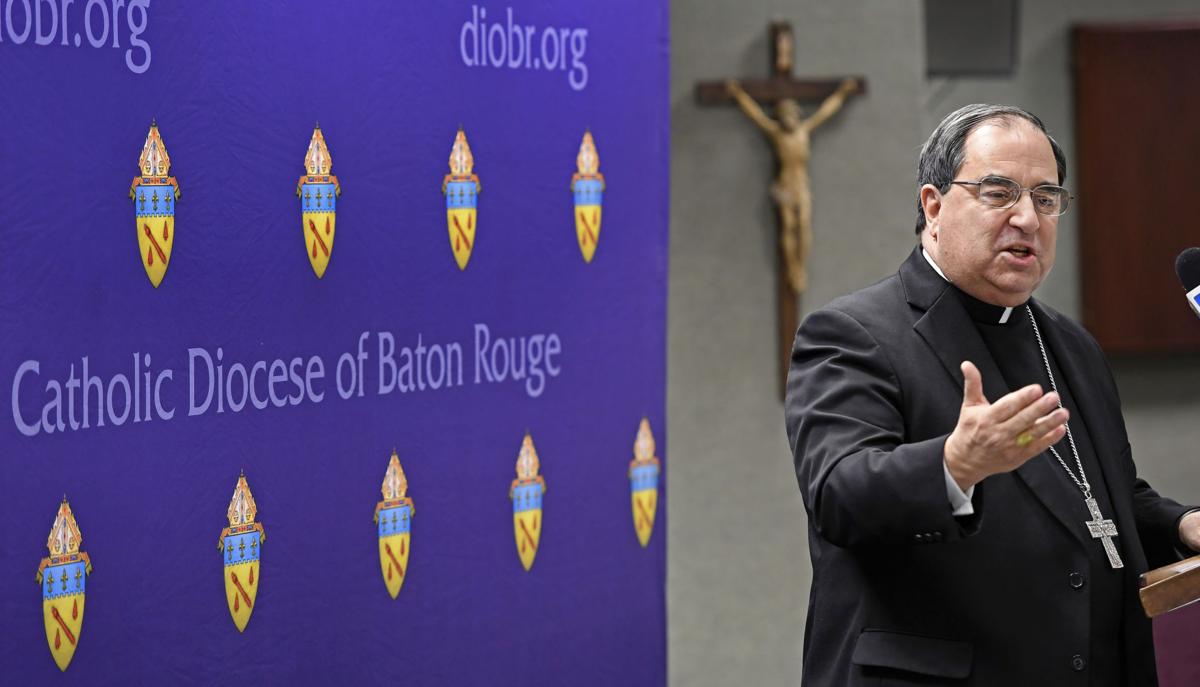 Catholic Diocese of Baton Rouge Bishop Michael Duca makes a point while releasing a list of priests who have been credibly accused of sexual abuse of a minor at a news conference Thursday Jan. 31, 2019, in Baton Rouge, La.

Catholic Diocese of Baton Rouge Bishop Michael Duca makes a point while releasing a list of priests who have been credibly accused of sexual abuse of a minor at a news conference Thursday Jan. 31, 2019, in Baton Rouge, La.

The Diocese of Baton Rouge is adding Timothy Sugrue, a priest who served for at least seven years in St. James Parish, to its list of Catholic clergymen who have been credibly accused of sexual abuse.

With the addition of Sugrue, the diocese's list now includes 38 clerics who served under its umbrella who stand credibly accused of sexual abuse of a minor. The Advocate reported Tuesday that Sugrue had been left off the diocese's list even though he was targeted by a high-profile lawsuit in Arkansas and was included on a similar list from the Diocese of Little Rock last year.

Former St. James priest was accused of sexual abuse in Arkansas, but was omitted from Baton Rouge list

The list of abusive clergymen the Diocese of Baton Rouge produced last week did not include a Marist priest who was the pastor of St. Joseph C…

But the diocese has also included other clerics on its list who served in Baton Rouge and were deemed to have been credibly accused elsewhere, among them several priests who faced allegations while in the Archdiocese of New Orleans. Borné said Baton Rouge officials had simply not been aware they had overseen a priest who had been accused in Arkansas.

"We did not receive notice from the Diocese of Little Rock that a priest on its list had served in Louisiana," Borné said. "As Bishop [Michael] Duca said when he released our list, this is a dynamic process, and the list will be updated as necessary and appropriate."

Borné said the diocese had combed through the other lists of clergy accused of sexual abuse in Louisiana for potential additions to the Diocese of Baton Rouge's list. In general, anyone who served in Baton Rouge who was credibly accused elsewhere in the state was included on Baton Rouge's list, he said.

Charles Bishop, who said he was abused in the 1970s and early 1980s by ex-Baton Rouge priest Christopher Springer, said Friday it's important for survivors of abuse to step forward.

Bishop said telling his story was the first step in his healing process. And he said that when survivors continue to share their stories, they will make the public more and more aware of how "out of control" the abuse was, and help to expose the church leaders who enabled the abuse at the time.

"The more people I told, the more weight of the abuse was lifted off of me," Bishop said Friday.

At least 30 people allege abuse by this Baton Rouge ex-priest: How one survivor turned his life around

The second time Charles Bishop served as an altar boy at St. Pius X in Baton Rouge, he started to cry.

A woman accused Sugrue in a 1992 lawsuit of abusing her in 1978, when she was 8 years old and he was a military chaplain at the now-closed Eaker Air Force Base in Blytheville, Arkansas. Her attorney said in an interview with The Advocate that he believed Sugrue had victims elsewhere based on his responses to questions about abuse in other states.

In 1993, a jury awarded the woman $1.5 million in damages. But she has never received a cent of the money, her attorney said. Sugrue took a vow of poverty as a priest, and courts ruled that the Marist order was under no obligation to pay the judgment on his behalf.

Sugrue was not removed from the priesthood until 2005, despite the lawsuit about his abuse being filed more than a decade earlier. He is believed to still be living in Florida, but The Advocate has not been able to make contact with him.

Before Clarence Biggers came to the Diocese of Baton Rouge in 1964, multiple girls told their parents that the Marist priest had kissed them, …

He is the second Marist priest who served in Paulina and who was accused of sexual abuse. The first was Clarence Biggers, who was included on the Diocese of Baton Rouge's original list, released Jan. 31. Sugrue said amid the litigation related to his abuse allegations that he and Biggers served together in Marietta, Georgia.

As Catholic dioceses across the state release similar lists, others have also raised questions about names that were omitted.

The Catholic Diocese of Alexandria, which released its list this week of credibly accused clergy, did not include former priest Jamie Medina-Cruz on it. But the Diocese of Alexandria placed Medina-Cruz on administrative leave in 2013 pending an investigation of "alleged misconduct with a minor," The Associated Press reported at the time. Medina-Cruz, who worked at St. Mary's Assumption Catholic Church in Cottonport, was found dead not long afterward in a hotel room, where police did not suspect any crime or foul play.

Asked why the Diocese of Alexandria did not include Medina-Cruz on its list, spokeswoman Joan Ferguson did not offer a specific reason, but reiterated that a review board evaluated 535 clergy files in the Diocese and released the 27 names of those with credible allegations of sexual misconduct and abuse of a minor.

The Diocese also clarified that two priests named Myles Kearney had served in the Diocese of Baton Rouge. The one who was the subject of a credible allegation of abuse was ordained in 1971 and his abuse was alleged to have happened in the late 1980s at St. John the Evangelist in Prairieville. The other priest named Myles Kearney, who was not accused of abuse, was ordained in 1938 and served at Our Lady of Mount Carmel in St. Francisville.

It was the third clergy sex-abuse list to be released by a Catholic bishop in Louisiana. And it was by far the most transparent.