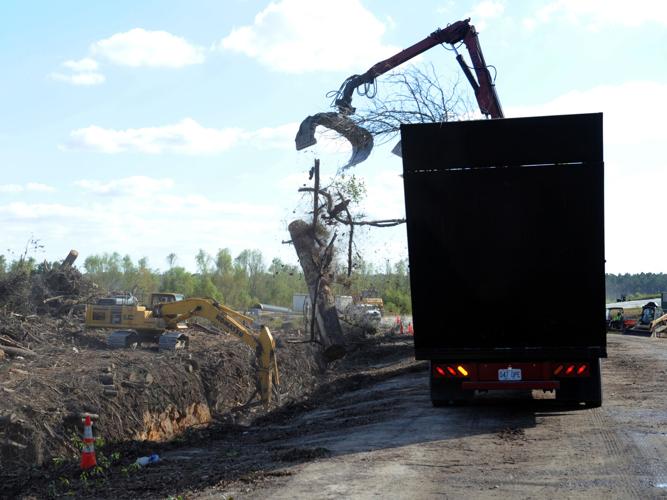 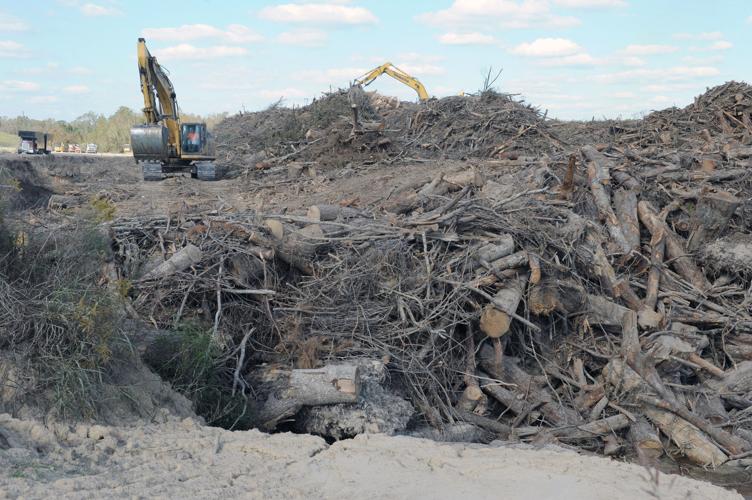 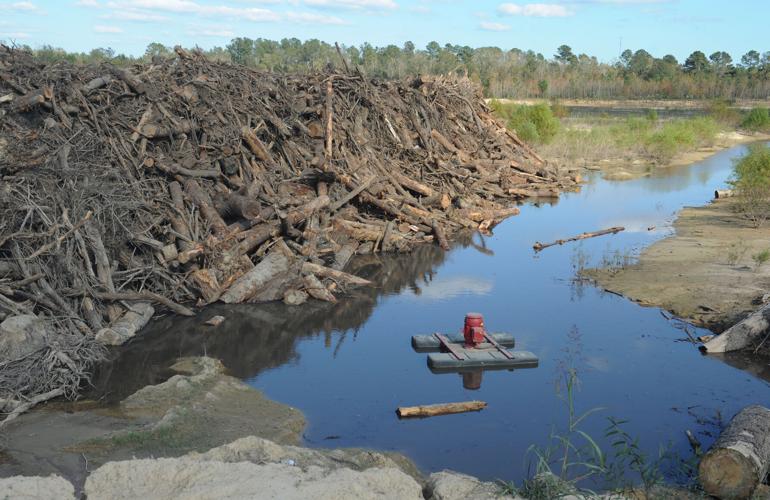 Vegetation debris from Hurricane Ida that has been dumped into a 50' deep pit at Woodside Landfill in Walker, Tuesday, November 16, 2021. 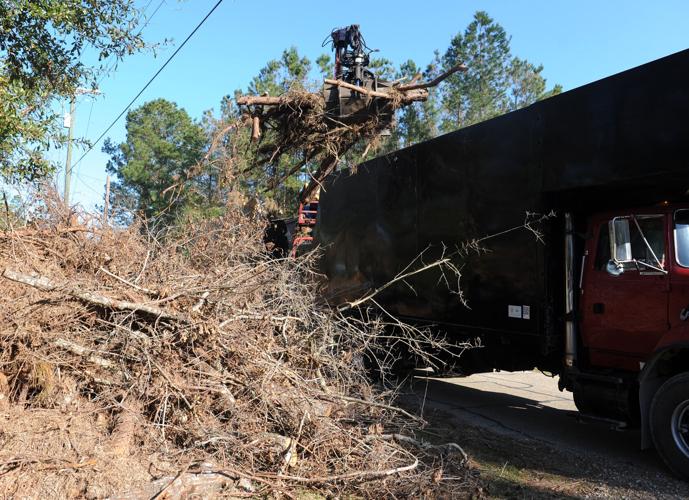 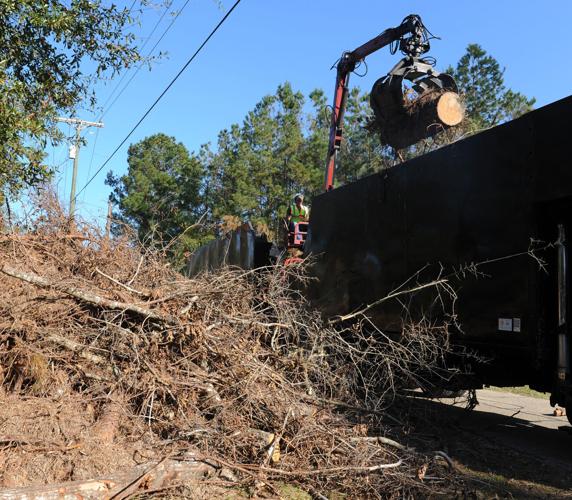 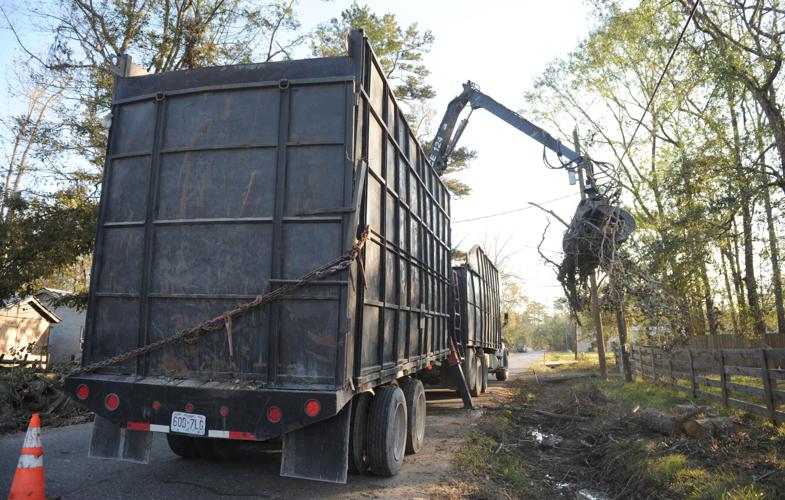 Hurricane Ida debris being picked up in Killian, Louisiana, Tuesday, November 16, 2021. The area was one of many in the parish where residents experienced flooding. 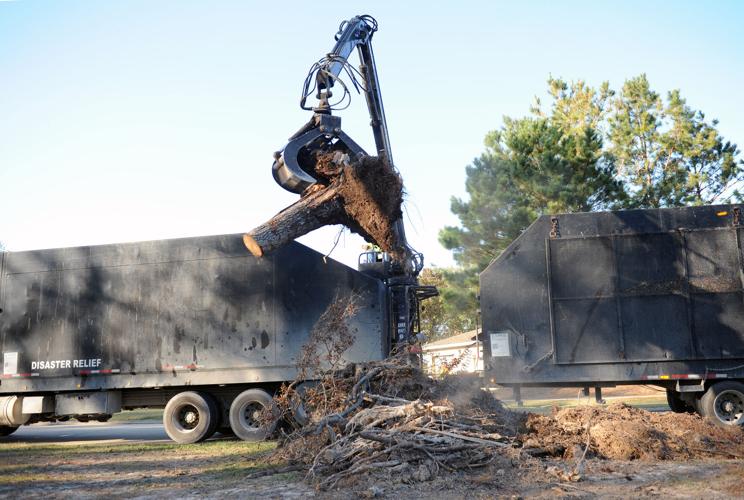 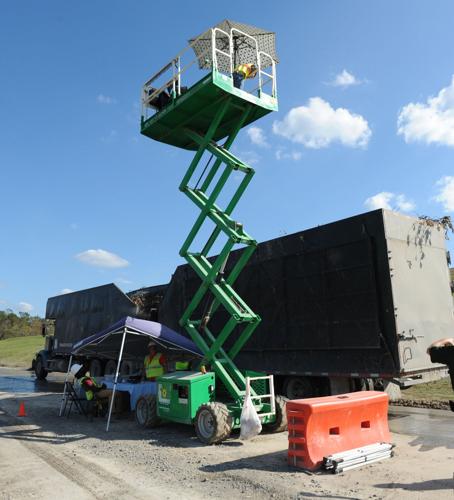 A crew member waits at the "tower" erected near the entrance of Woodside Landfill in Walker, Louisiana to admit a debris pickup truck with a load on Tuesday, November 16, 2021. 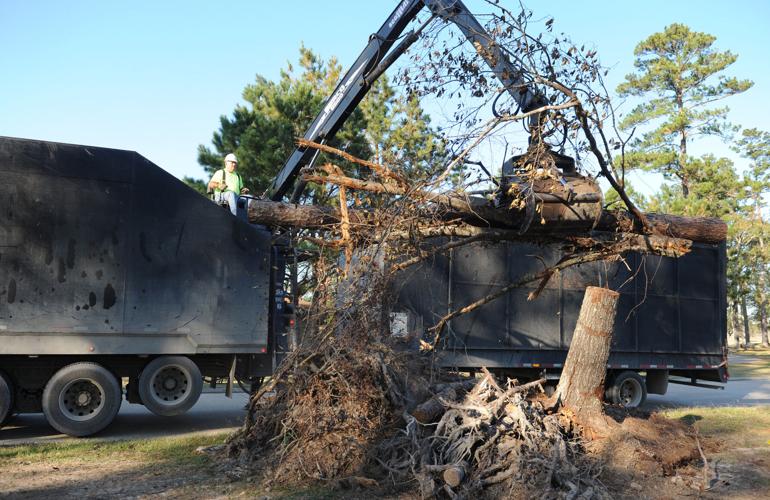 The operator of a double truck manipulates the mechanical arm to scoop a load of branches from a relatively small pile of debris left in the wake of Hurricane Ida at the Carter Plantation golf course community in Springfield, Louisiana, Tuesday, November 16, 2021. 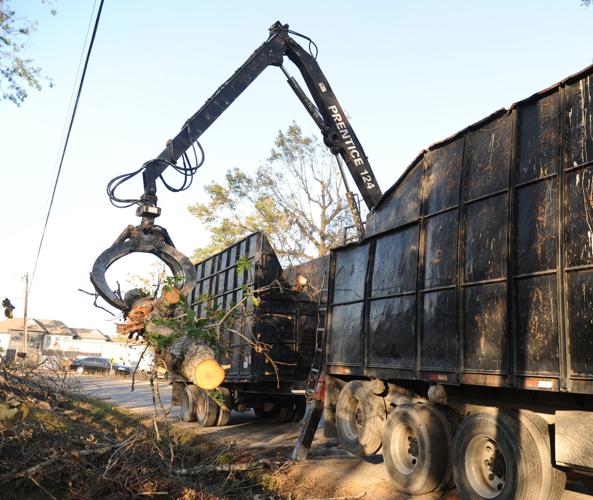 The operator of a double truck retrieves a large tree limb from a pile of debris left in the wake of Hurricane Ida in Killian, Louisiana, Tuesday, November 16, 2021. 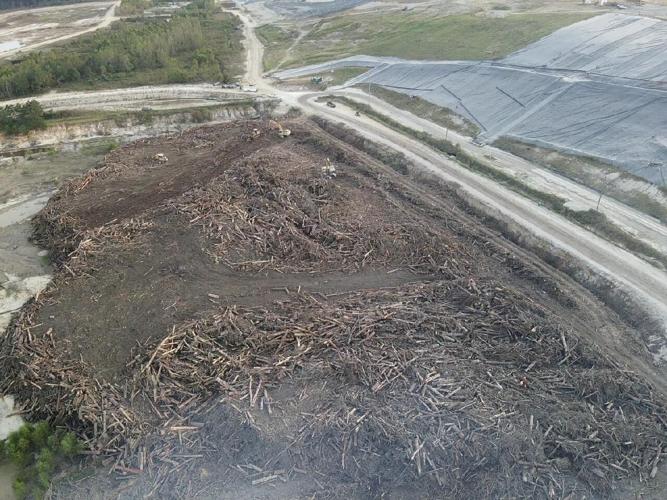 A view of the vegetative debris collected in Livingston Parish from Hurricane Ida, housed at the Woodside Landfill in Walker. Photo by Phil Ziegler for Thompson Consulting Services.

Vegetation debris from Hurricane Ida that has been dumped into a 50' deep pit at Woodside Landfill in Walker, Tuesday, November 16, 2021.

Hurricane Ida debris being picked up in Killian, Louisiana, Tuesday, November 16, 2021. The area was one of many in the parish where residents experienced flooding.

A crew member waits at the "tower" erected near the entrance of Woodside Landfill in Walker, Louisiana to admit a debris pickup truck with a load on Tuesday, November 16, 2021.

The operator of a double truck retrieves a large tree limb from a pile of debris left in the wake of Hurricane Ida in Killian, Louisiana, Tuesday, November 16, 2021.

The massive pile of felled trees and turned soil at the Woodside Landfill in Walker is imposing at first glance. It's a tower of Hurricane Ida debris that dwarfs the excavators churning slowly through broken branches.

But when you approach the edge of the small mountain, the true scale of the storm wreckage becomes apparent: The sprawling hill of rubble is actually overflow, having first filled and then spilled over a pit 50 feet deep.

“This was a huge, huge pit and we have filled it up,” he said. "The amount of debris is unreal."

Three months after Ida abruptly changed course and beat a devastating path through Livingston Parish, the local government's cleanup effort has raked in more than 1 million cubic yards of debris and is projected to surpass the total amount collected in the wake of the 2016 flood.

"We expected some debris, but not what we got," Harrell said. "[Ida] did some weird things."

Some members of the Livingston Parish Council have criticized Harrell and acting OEP director Brandi James for how the cleanup effort has been handled. They say constituents have complained that heaps have sat in yards for months and that crews have missed some streets.

In a council meeting earlier this month, District 8 Councilman Randy Delatte heatedly declared that "someone needs to take control," of the debris situation.

"We do have control," Harrell replied.

The process, he said, takes time to do right.

Gary Brooks stood beside a giant double truck parked close to a large pile of downed trees just outside the Albany city limits, where Hurricane Ida caused some of the worst damage.

Brooks works for Thompson Consulting Services, a Florida-based company contracted by Livingston Parish to monitor debris removal. His job, he says, is to oversee the cleanup process "from cradle to grave."

The "cradle," in this case, is the bed of the truck.

As a crew member sitting on a platform between the two beds operated the arm of a giant claw, the mechanical jaws closed around rotting branches and sliced tree trunks. The arm hovered for a moment, shedding pine needles and dead leaves, before the claw released the load into the truck bed.

A Thompson-hired monitor stood clear of the truck but with a good view of the claw, carefully watching the progress to see if anything other than sticks and brush had been loaded into the bed.

Since the debris will be burned, they need to be sure a propane tank, among other trash, hasn't made it into the pile. Vegetative debris, like this pile, and construction and demolition debris, like the insides of someone's gutted home, must be kept separate.

Everything has a GPS coordinate attached to it. When crews come to cut and trim "leaners and hangers" — trees leaning at a certain angle over public roads, or branches dangling across intersections — those passes are marked by a coordinate. When the truck arrives to collect the load, that pickup receives a coordinate.

And when the truck hauls a load to the "grave" — or the landfill — the weight, amount, timestamp and location are all recorded.

Inevitably, Harrell receives frustrated messages from residents complaining that a truck has avoided their street or ignored their piles. Now, he has an answer for them backed up by the monitoring technology.

Two months after Hurricane Ida, Livingston Parish has removed 930,000 cubic yards of debris, thanks to 40 double trucks that have been deploye…

Often trucks passed through their streets early in the storm aftermath, before people managed to drag their piles to the road. In other cases, their trash presents a special challenge.

Some of the sites have as many as 20 tree stumps hidden under small mountains of leaves and tree limbs. Those are often large enough that crews must drill through their centers to bust them open.

Other wreckage heaps are behind powerlines, which creates a problem for the double trucks when the claw is obstructed by live wires.

In other cases, piles are too far back for the truck's arm to reach, meaning the property owner will need to sign a "right of entry" form for the trucks to roll onto their land.

“I can promise you, no matter what you do to do the right thing, there’s going to be someone that’s left behind that you didn’t get to in the proper amount of time," Harrell said. "A parish this size, you’re going to make some mistakes. It’s human nature. You just do the best you can.”

The collection cycle began long before dozens of double trucks bearing the mark of Ceres Environmental Services, the company contracted for removal, rolled through the landfill's gates for the first time.

Crews hit the roads in the immediate aftermath of a hurricane to begin the "cut and push" —  slicing through the downed trees and pushing them off the pavement to clear a lane for traffic and emergency responders. In many cases, crews were forced to wait for water to recede.

"That’s the first thing you do," Harrell said. "Once you get all of the cut and push done, then you start picking up the debris."

The arduous task could cost or save the parish millions.

In Ida's aftermath, President Joe Biden extended the period in which the federal government pays 100% of the cost of debris removal from 30 to 45 days since the start of the incident. The more wreckage collected in that time frame, the better, Harrell said.

Trucks have focused on parish roads that have the largest trash heaps, since the Federal Emergency Management Agency pays by the amount of debris gathered. State roads in the parish are serviced by the Department of Transportation and Development.

"All we’ve done is just get after it," Harrell said. "We had 69 trucks working at one time. We’re trying to pick up as much bulk as we can because in the end, you’re saving the parish several million dollars."

The catch is that the parish must follow strict guidelines for the cleanup in order to receive full funding.

After Hurricane Gustav hit in 2008, the U.S. Civilian Board of Contract Appeals denied the parish’s $59 million in claims with FEMA for cleanup costs. The panel cited the parish’s failure to properly document its claims.

Although Harrell wasn't working for the OEP at the time, he cites the legacy of that botched removal as one of the reasons why the cleanup takes so long. It's why the monitoring company must be so careful about recording every action.

“That’s what a lot of people don’t understand, nor do they ask questions to understand," he said. "My job is to make sure this [is done] as safe and as quick as I can and get FEMA to reimburse."

As of last week, the number of double trucks trundling across the parish had dwindled to 30. Harrell is confident the worst of the debris removal process is over, although he still must contend with the parish's clogged waterways.

FEMA has opted not to pay for that cleanup, so the parish must wait on Congressional funding for the Natural Resources Conservation Service before they face the challenge of cleaning Livingston's many canals and rivers.

Friday was the last day the pickup trucks will roll until Dec. 6, Harrell said. After that, the trucks will make a final pass of all parish roads. On Monday, a hotline at (225) 394-2734 will go live for people to call in their debris needs.

Livingston Parish wrapped up work on 400 miles of streams after 2016 flood, then Ida hit.

Five years after the 2016 flood devastated much of Livingston Parish, the local government had finally emerged from the mire of red tape and f…