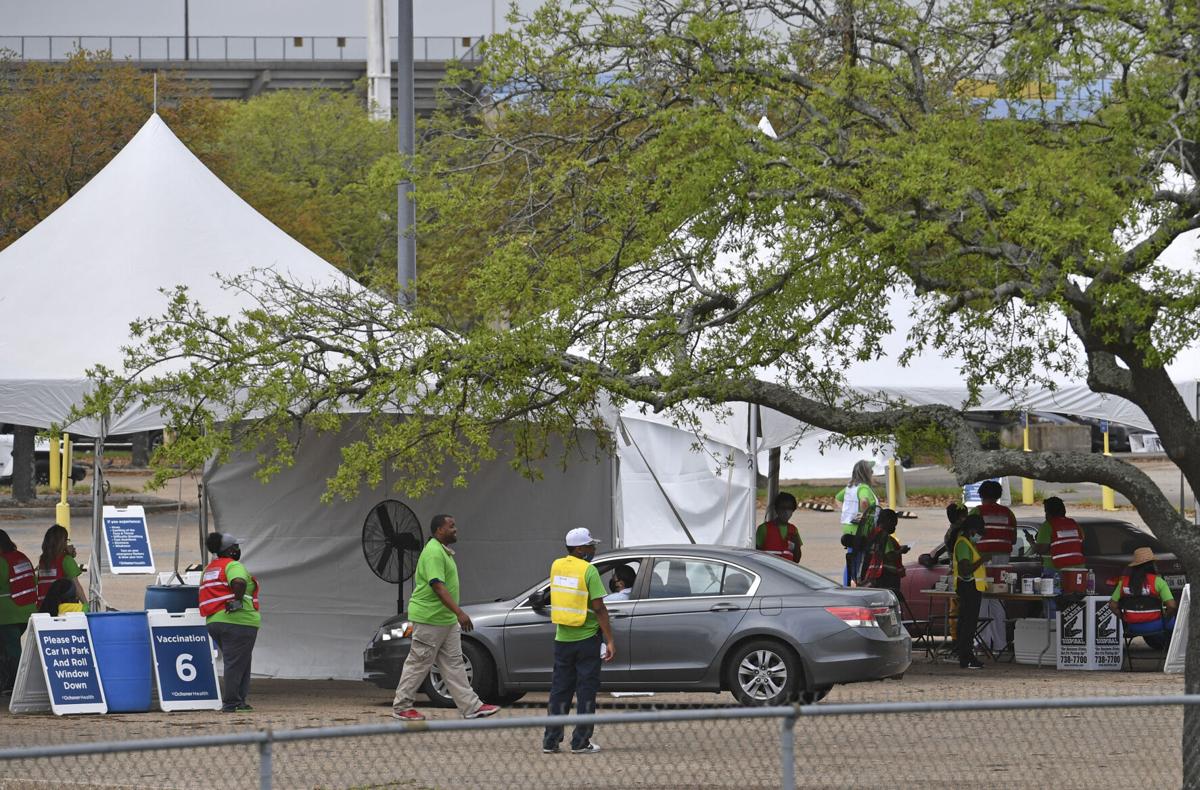 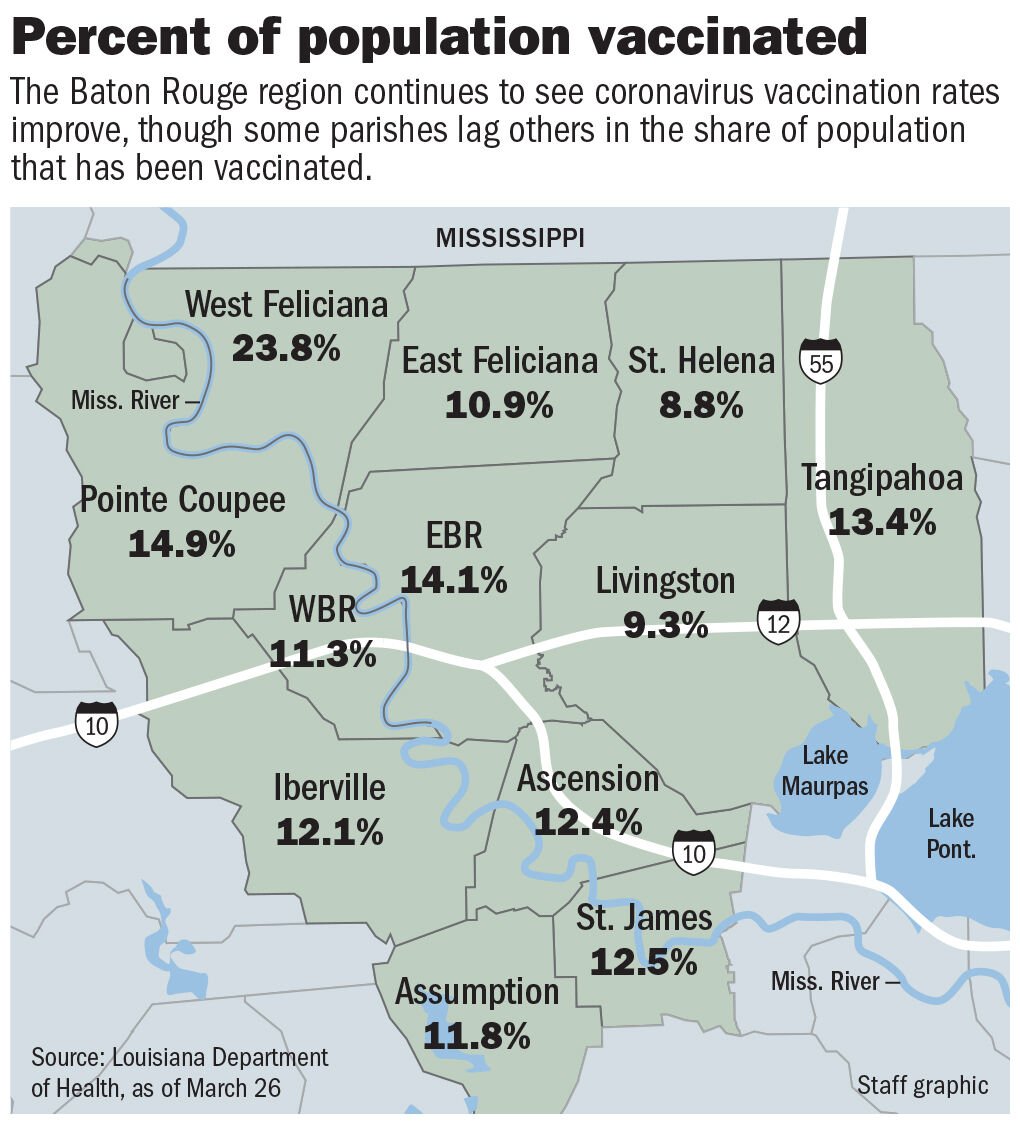 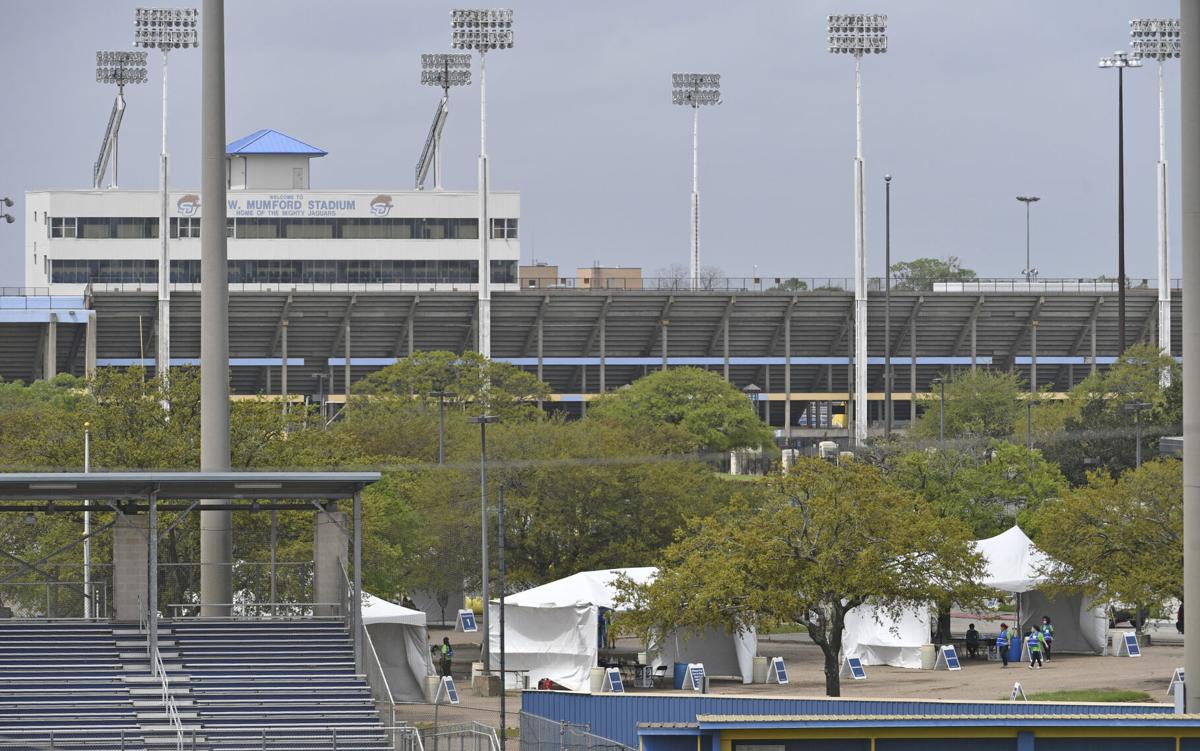 DONALDSONVILLE — Phyllis Zeno finally broke down and got her first vaccination for the coronavirus.

Speaking outside a Walmart off La. 3089 not long after getting her shot, the 61-year-old Donaldsonville resident said the persistence of her coworkers overcame her fears about the vaccine.

City officials have said the majority-Black city on the west bank of Ascension Parish has struggled with vaccine hesitancy as new state figures show local vaccination rates remain behind the parish's overall rate. But state and local health officials say they hope more people are having one-on-one conversations with friends, family and physicians and have the change of heart that Zeno has had.

The Baton Rouge region continued a slow climb of rising vaccination rates this past week, state figures show, as state officials try mass vaccination events, like one at Southern University on Saturday. And they hope other, more targeted outreach will boost numbers further.

There are some bright spots. East Baton Rouge Parish's per-capita share vaccinations was right at the statewide figure at 14.1%, while West Feliciana Parish is the highest in the region at nearly 24%.

However, all but three of the 12 parishes in the Baton Rouge area behind the state average for vaccinations, the latest state statistics show.

Black residents' underrepresentation in vaccination numbers is narrowing in the region, though the extent varies and disparities remain. And some more rural, majority-White areas are seeing the same kinds of low numbers. Livingston Parish, where 90% of the population is White, has the second-lowest vaccination rate in the Baton Rouge region, at 9.3%.

Brandi Janes, Livingston's homeland security director, said that her parish has continued to have community events to reach out the parish's most rural areas. But people aren't always showing up.

Some rural residents, she said, think they're unlikely to get the virus, while others worry about side effects from the vaccine. Still, Janes said she is seeing attitudes change as time passes and more vaccines are given.

"As more people get it, it's going to have to be word of mouth that, you know, they're fine," Janes said.

As vaccination rates rise, hospitalizations, new cases and deaths have hit their lowest point since the start of the pandemic.

Dr. Joseph Kanter, Louisiana's state health officer, said he is encouraged that hospitalizations have fallen below 500 statewide for the first time since early in the pandemic -- hospitalizations peaked at 2,069 in early January.

But, in the Baton Rouge area, the decline in cases and hospitalizations has stalled in the past few weeks. That's a concern as the more contagious "U.K. variant" of the virus continues to spread.

"I think the variant is going up, and, you know, it's more and more transmissible, and I think people are fatigued, Kanter said. "They're tired, and they're not as compulsive about masking as we would want, you know, and I think both of those are contributing."

The Baton Rouge health region, which encompasses about two-thirds of the greater Baton Rouge area, ranks third in the state for the number of cases of the UK variant of the virus, known as B.1.1.7, Kanter said. The Lake Charles and New Orleans areas are first and second.

Dr. Ralph Dauterive Jr., vice president of medical affairs for Ochsner Medical Center in Baton Rouge, said Ochsner's local hospital has also seen a plateau in patients. It was below 10 hospitalizations for a few days but was back up to 16 last week — with eight in intensive care.

He attributed that plateau to insufficient vaccination numbers. He said not enough people have been vaccinated "to say we're out of the woods."

"I'd like to think we're in a part of the woods where we can see the clearing," he said. "But we're still under the trees."

But at this point, he said, only a handful are. Most hospitalized patients are between 50 and 65, age groups that were lower on the state priority list than the oldest and most vulnerable people who were at the top.

"There's a palpable shift in the age, just looking at it right now over the last couple of weeks, that you're just not seeing 70-year-olds in the hospital," Dauterive said.

He cautioned that he didn't have data from other Ochsner hospitals in the region to see if those trends had been replicated elsewhere in the state.

But Dauterive's early observations in Baton Rouge match local vaccination levels. In the Baton Rouge health region, 71% of people 70 and older have been fully vaccinated, but just 13% of those 50 to 59 have been, the latest statistics show.

The latest figures may also suggest that recent efforts to reduce lagging vaccination rates in local Black communities may be having some success.

In most Baton Rouge-area parishes, Black residents remain underrepresented. But the gap among those who have received a first dose of the vaccine is smaller than the gap for those who have gotten both shots.

In some parishes, like Assumption, East Feliciana and Ascension, the percentage of White residents with shots has actually fallen below the parish-wide average — if it ever got there in the first place.

East Baton Rouge Metro Council member Carolyn Coleman has helped organize a mass vaccination site at the Leo S. Butler Community Center along East Washington Street, a part of Baton Rouge where complete vaccination rates are between 5.6% and 7.2% — less than half the parish-wide figure.

She said the center gave out 300 shots in early March and plans another round in early April. That effort involved walking the neighborhood and knocking on doors to encourage people to sign up.

While Coleman believes attitudes about the virus are improving, many still aren't getting shots due to a combination of hesitancy and the demands of daily life, she said.

She said more outreach, including perhaps vaccination sites at schools, and one-on-one conversations by people trusted in the community are needed.

"If folk trust you, folk will come." Coleman said.

Where does the COVID vaccine campaign in Baton Rouge stand? Here are four key takeaways

As of Monday, everybody who's age 16 or older can get a coronavirus vaccine. We took a deep dive into the state's data to see how the push to …