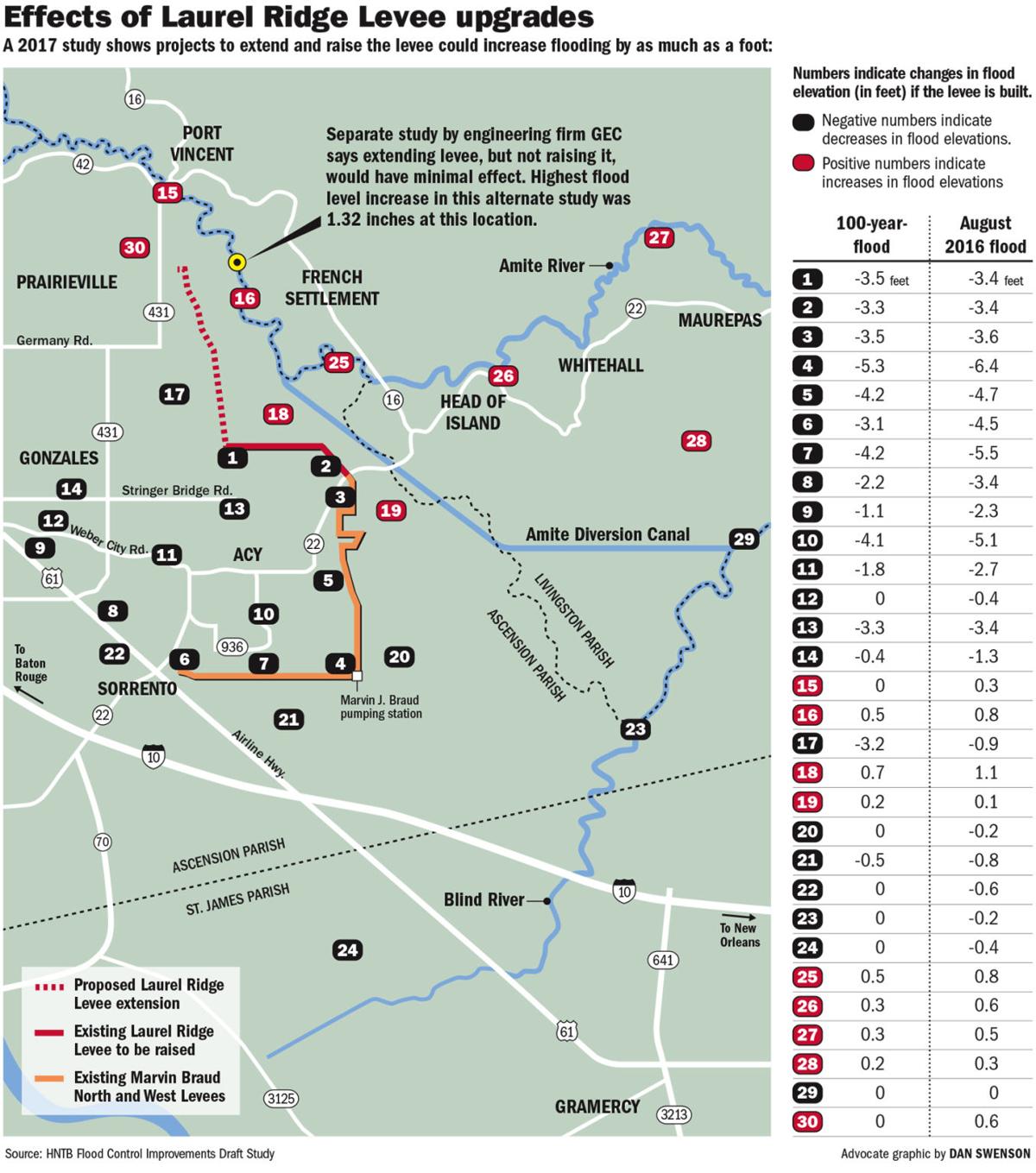 Livingston Parish officials have sued Ascension Parish to stop work on a levee project proposed by their neighboring parish until it can be determined how seriously the project would worsen flooding in their parish.

In a new lawsuit, officials with Livingston Parish government and a southern Livingston drainage district contend the proposed extension of the Laurel Ridge Levee would raise water levels in Port Vincent and parts farther south in Livingston by at least 1.32 inches, and possibly more, during a benchmark 100-year flood.

The parish agencies claim the 4 and a half mile levee extension through the St. Amant and Lake Martin areas of Ascension would cut off 5,000 acres of land in the Amite River Basin that normally holds and allows floodwater to drain, causing "irreparable harm to (the) Parish of Livingston and its residents" outside the future levee.

The lawsuit says the parish agencies' intention is not to prevent Ascension officials from helping their residents and their properties through the proposed levee extension.

Filed in the 19th Judicial District Court, the suit names Ascension Parish and the Louisiana Department of Natural Resources, Office of Coastal Management as defendants.

The suit was filed May 24, five days before Gov. John Bel Edwards announced the creation of a new statewide floodplain management program aimed at coordinating flood protection plans within individual watersheds, such as the Amite River Basin.

Gov. John Bel Edwards on Tuesday announced the creation of the Council on Watershed Management, with the purpose of adopting regional approach…

As policymakers, funding organizations and citizen volunteer groups grapple with trying to prevent another disaster like the 2016 flood that e…

Livingston officials had threatened legal action over the levee extension near the Amite River for the past several months, since the long-standing project received a key federal permit from the U.S. Army Corps of Engineers and apparently caught the parish’s top leadership off guard.

Livingston’s new suit makes a point of referring to that claim. The suit notes Ascension officials had promised to work in “good faith” to share floodplain research on the Amite River Basin and ensure “that no one Parish’s actions adversely affected other surrounding Parishes and their citizens.”

But the suit alleges the permit process went forward without consultation with Livingston government and the drainage district, even though Ascension had paid for a study finished in August 2017 that at least suggested flooding in Livingston could be worse than initially believed if it was built.

Ascension officials have previously disputed the claim that Livingston officials didn’t known about the levee extension, saying they were informed years ago and were reminded of its progress during regional drainage meetings last year. The study in question, produced by HNTB for an Ascension drainage district, wasn’t provided to Livingston Parish until sometime in the spring, after the levee had cleared all key permits.

On Monday, Ascension Parish officials declined to comment on the lawsuit but defended the propriety of the state and federal permit process for the levee. The officials also noted that Pontchartrain Levee District, not Ascension government, is the project sponsor through the permitting process.

"Ascension Parish remains in full support of the Pontchartrain Levee District’s extension of the Laurel Ridge Levee and believes the permit was granted properly after thorough review by the Department of Natural Resources and the (U.S.) Army Corps of Engineers," Kyle Gautreau, an Ascension spokesman, said on Monday.

Neither the Corps of Engineers or the levee district were named in the lawsuit, which was filed in the 19th Judicial Court.

Chris Moody, Livingston Parish's legal adviser, said parish officials didn't sue the Corps because doing so would have brought the case into federal court and the agency has "more clear immunity on these kinds of claims" when the Corps' actions are done in good faith.

He said the parish does not believe that the Corps acted in bad faith in issuing its permit for the levee but also has not ruled out a federal case in the future.

“This just seemed to be the quicker, simpler remedy for us,” Moody said of a state court suit.

He added that parish officials did not believe that the Department of Natural Resources followed proper procedure in issuing its permit, including notifying all affected parties.

Livingston officials have asked a judge to order the Department of Natural Resources to review the HNTB study, other analyses and meet other statutory permit requirements as part of the reason for requesting the halt in the levee project.

State Judge Michael Caldwell has set a hearing for 10:30 a.m. June 11 to decide whether to issue a preliminary injunction to temporarily halt the parish's final design and land acquisition for the levee and also to halt permitting by the Department of Natural Resources Office of Coastal Management until the case is settled.

The HNTB study looks at the flooding impact of the proposed Laurel Ridge Levee extension and an additional, related improvement to an existing section of the same levee. The analysis predicts more significant flooding impacts for Livingston than known earlier if both levee projects are built.

While Ascension has been moving forward with the levee extension, the other levee project, which would raise the height of the existing Laurel Ridge Levee, has been part of long-term plans to shore up that parish's flood protection ring but is not funded.

When the HNTB study came to light this spring, a copy was provided to the Department of Natural Resources by The Advocate. At the time, the department officials said they had not seen nor were they aware of the HNTB study but they had already issued a key coastal zone permit for the levee extension.

Livingston Parish officials also want Caldwell to order Ascension to provide more detailed hydrological data than they have received so far from the parish so Livingston Parish engineers can independently determine the levee's impact.

Ascension and levee district officials have pointed to a separate levee district analysis, which was shared with state and federal agencies as part of the permit process, that suggested the flooding impact would be far less, adding three-quarters of an inch of water near Port Vincent in a 100-year flood. The levee district has since revised that estimate upward to 1.32 inches, still far less than what the HNTB study envisions.

Patrick Courreges, spokesman for the Department of Natural Resources, said Monday the agency's attorneys have advised the agency not to comment on the "pending litigation, other than to say that we believe our Office of Coastal Management staff acted appropriately in reviewing the permit and properly applying the relevant laws and regulations."

Moody, the Livingston attorney, said the levee district could end up a defendant in the suit, too, but added that Livingston officials really hope to engage in talks with Ascension.

“We’re hoping Ascension will come to the table and show us this will not affect Livingston Parish or make some changes to their plans,” Moody said.