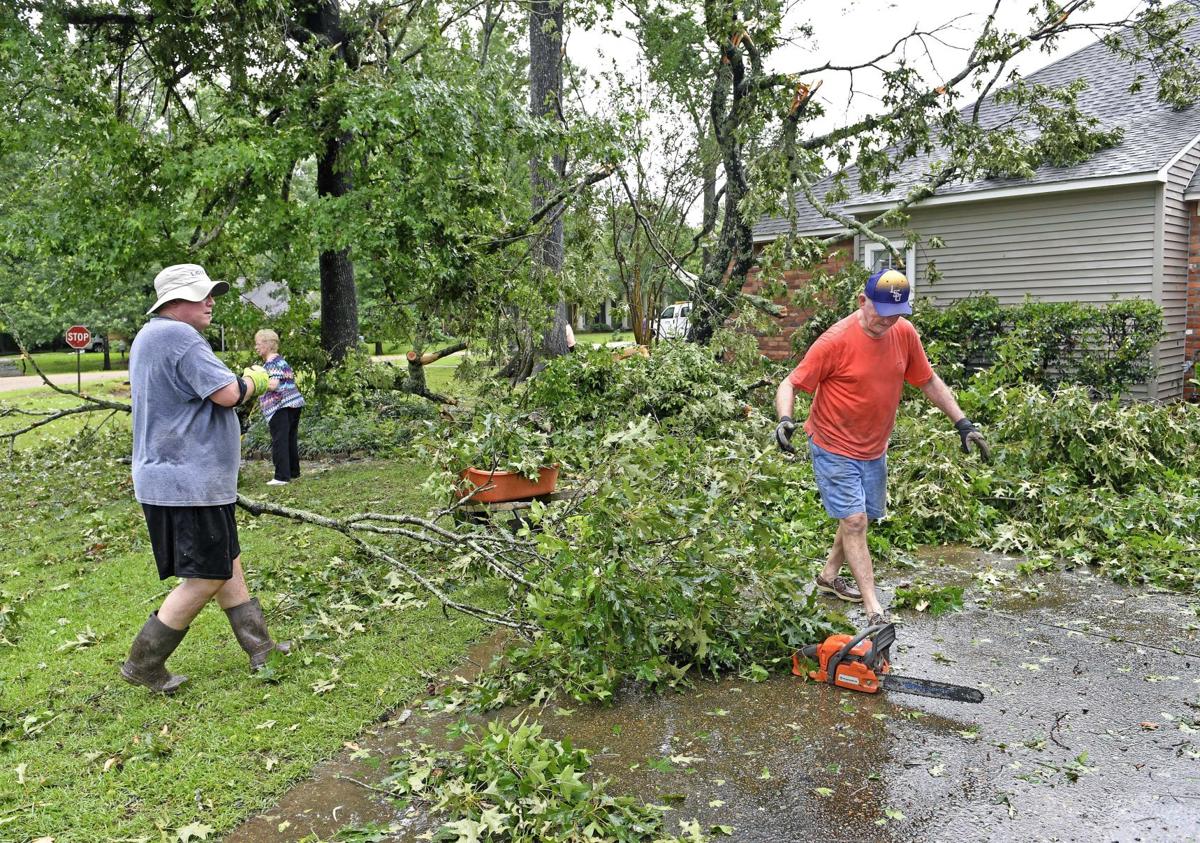 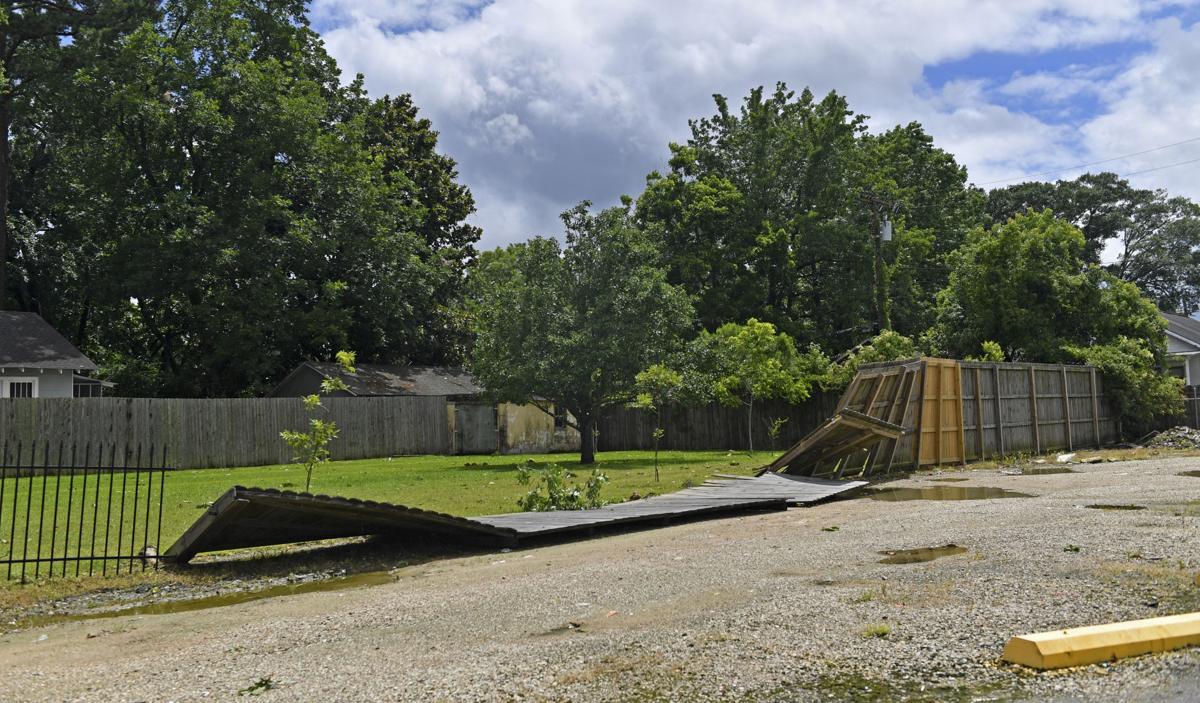 A wooden fence lays on its side after being blown over near Acadia Street and Government Street after severe weather moved through the area, Thursday, June 6, 2019, in Baton Rouge, La. 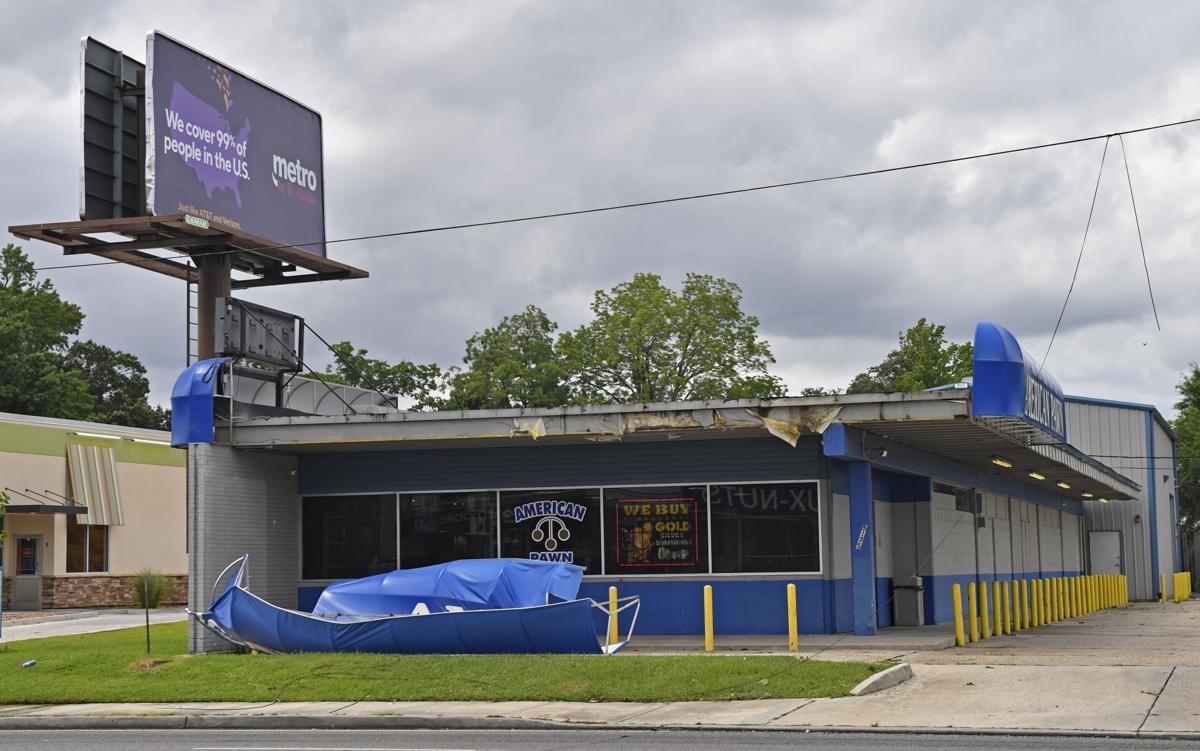 The awning at American Pawn lays crumbled in the parking lot at the intersection of Community College Drive and Government Street after severe weather moved through the area, Thursday, June 6, 2019, in Baton Rouge, La. 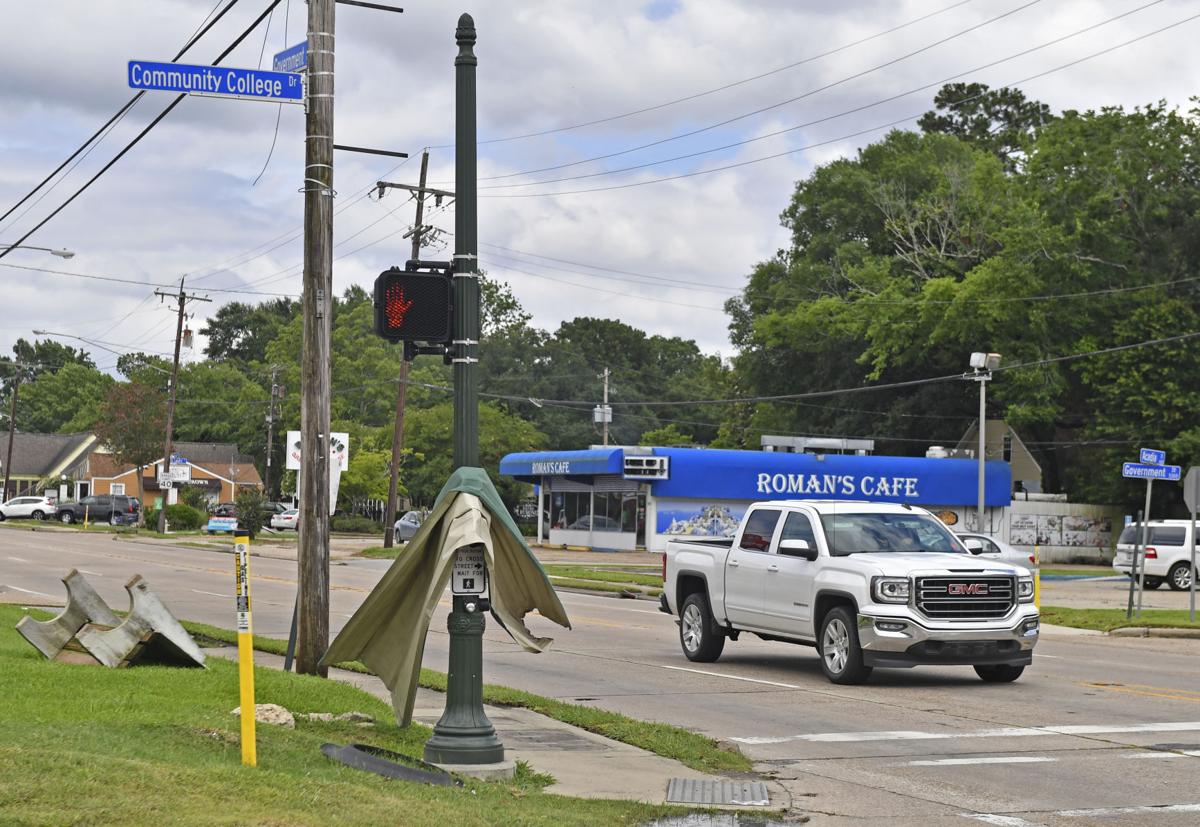 Metal siding remains wrapped around a pole near an overturned bus stop bench at Community College Drive and Government Street after severe weather moved through the area, Thursday, June 6, 2019, in Baton Rouge, La. 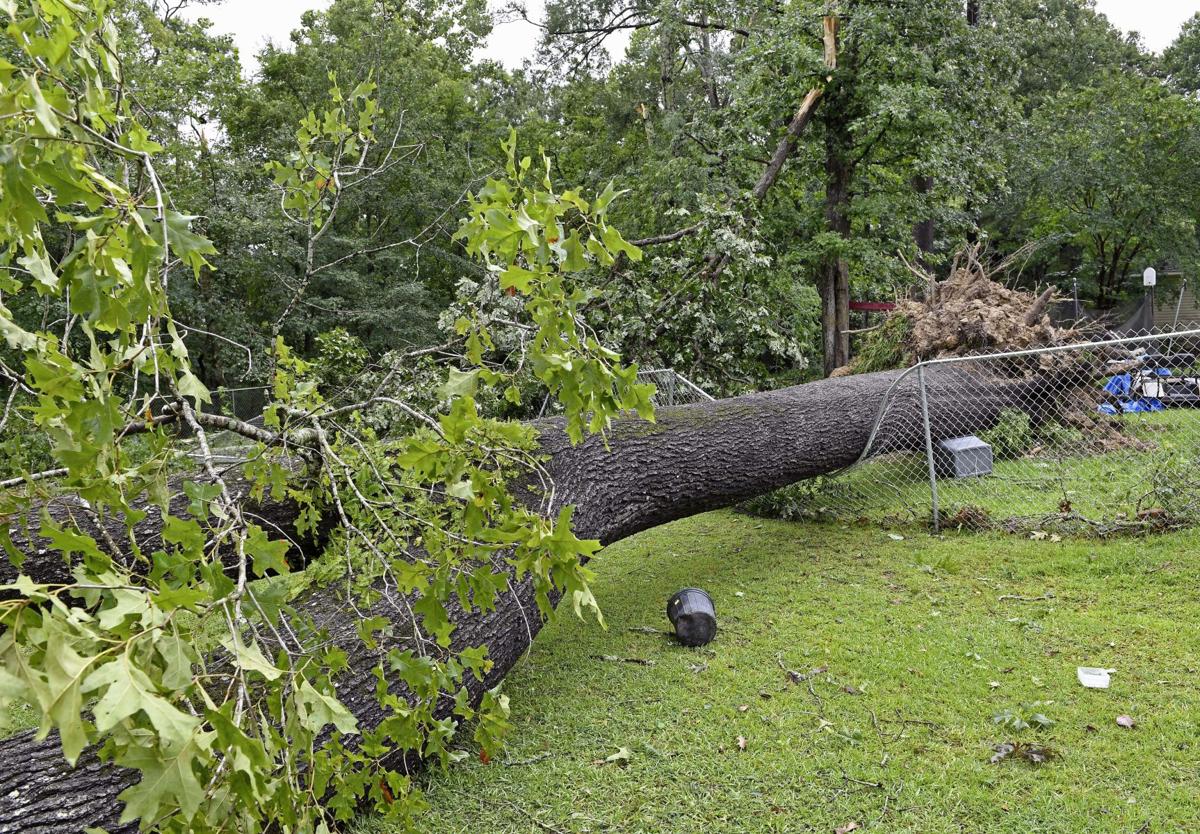 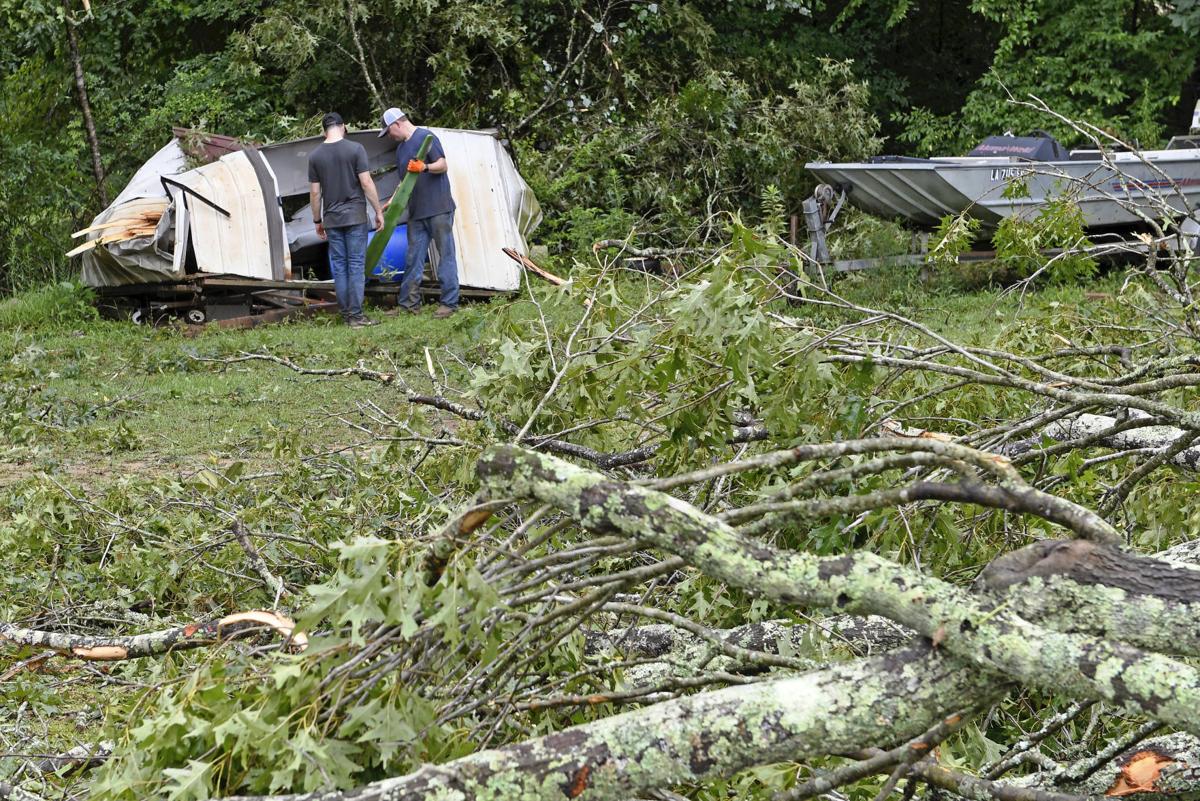 Chase Smith, left, and Cody Smith check out the destroyed storage shed which was next to the boat that didn't sustain any damage after tornado damage on Brillock Avenue in Comite Hills West subdivision Thursday June 6, 2019, in Central, La. 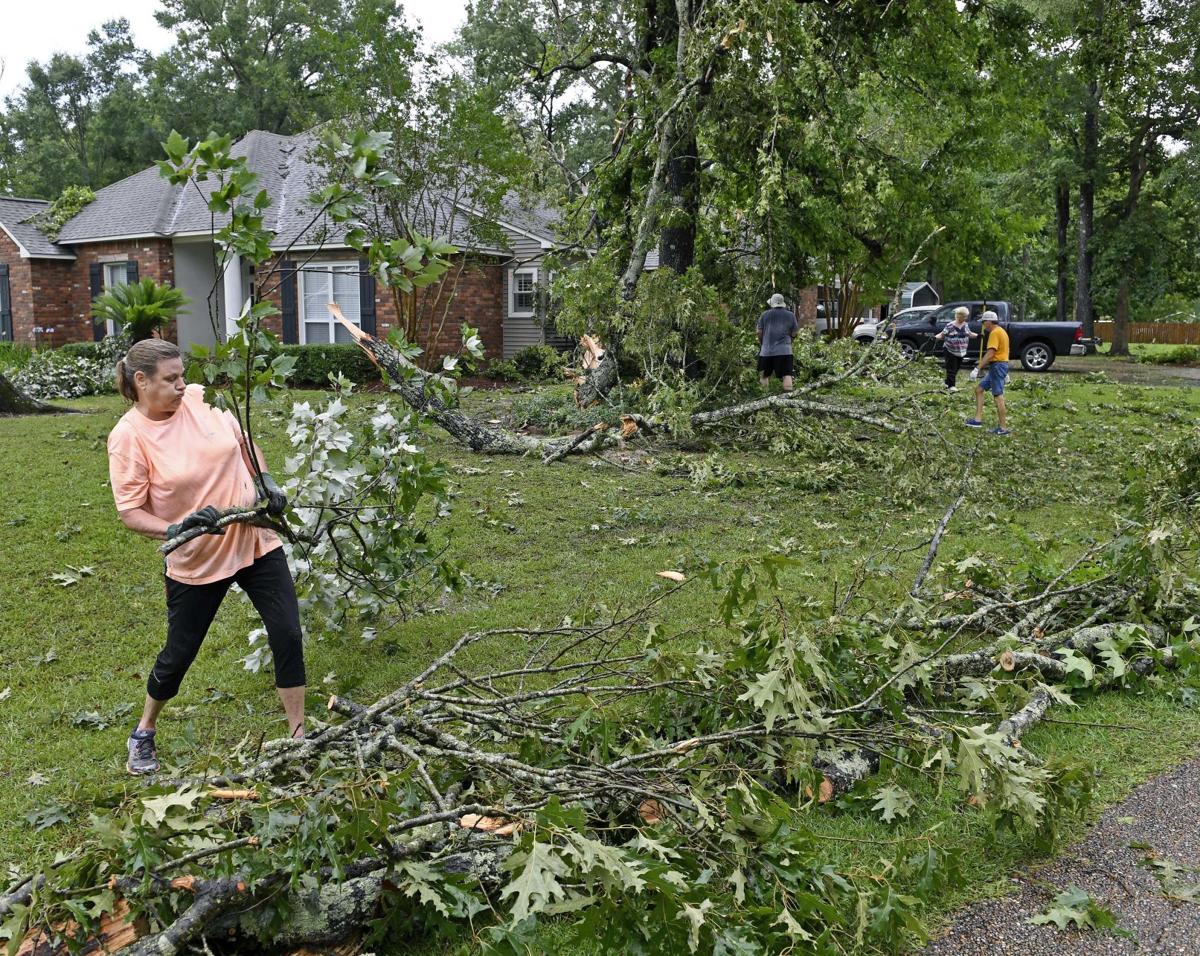 Fallen tree that sheared the front off of a house after tornado damage on Brillock Avenue in Comite Hills West subdivision Thursday June 6, 2019, in Central, La.

A wooden fence lays on its side after being blown over near Acadia Street and Government Street after severe weather moved through the area, Thursday, June 6, 2019, in Baton Rouge, La.

The awning at American Pawn lays crumbled in the parking lot at the intersection of Community College Drive and Government Street after severe weather moved through the area, Thursday, June 6, 2019, in Baton Rouge, La.

Metal siding remains wrapped around a pole near an overturned bus stop bench at Community College Drive and Government Street after severe weather moved through the area, Thursday, June 6, 2019, in Baton Rouge, La.

Chase Smith, left, and Cody Smith check out the destroyed storage shed which was next to the boat that didn't sustain any damage after tornado damage on Brillock Avenue in Comite Hills West subdivision Thursday June 6, 2019, in Central, La.

Fallen tree that sheared the front off of a house after tornado damage on Brillock Avenue in Comite Hills West subdivision Thursday June 6, 2019, in Central, La.

Unexpected flash floods inundated Baton Rouge-area neighborhoods that had escaped unscathed from water that displaced thousands of families in 2016. While the rain moved out quickly, the resulting floods hit downtown Baton Rouge, Mid City and southeastern area of the parish particularly hard, and left one person dead.

Forecasters had predicted a series of storms for the region this week after an area of disturbed weather developed in the southwestern Gulf of Mexico, but it wasn't clear there'd be such significant rain — 7 inches in places — in such a short time until early Thursday. Residents had almost no time to prepare.

Flooded vehicles lined the streets of Beauregard Town — Baton Rouge's historic downtown neighborhood south of North Boulevard — and some houses there had taken in several inches of water. Authorities said the swollen Mississippi River could have contributed to flooding in that area because the ground was already saturated.

Andrea Linck, 31, who has lived in one side of a duplex on Louisiana Avenue for the past five years, said this was the first time water rose above the level of her front porch. She was at work in Port Allen when her neighbor called Thursday morning to tell her the news.

"It looks like the water just swept through," she said while taking a break from mopping up the leftover layer of dirt. "I was worried in 2016, but this came out of nowhere."

Torrential rain packed into a short time and an outbreak of tornadoes in the Baton Rouge area on Thursday killed at least one person, prompted…

Linck and others said the good news is that damage to their homes appeared to be more nuisance than devastation — some ruined rugs and furniture rather than the prospect of extensive renovations, like those in Ascension, East Baton Rouge and Livingston parishes saw after the Amite and Comite rivers backed up three summers ago.

Daryl D'Andreo, 20, who had just moved to Baton Rouge from Oregon three weeks ago, rents the other half of Linck's duplex. He said the good news is he didn't bring much stuff since he's just here for a summer internship at IBM.

But he was inside his apartment when the flash flooding occurred, the water level reaching about to his ankles.

"I turned off the electricity, sat on a stool and waited for the rain to stop," he said with a smile. "I didn't really know what else to do."

About a block down the road, Liz Betz was dealing with the aftermath of her car being flooded in her office parking lot. Betz is executive director of the Capital Area CASA Association, an organization that serves abused and neglected children. She got to work early on Thursday, just in time for torrential rains to inundate the downtown area starting around 8 a.m.

In the Garden District, Claire Pittman had been planning to spend Thursday packing for a family vacation in Germany, but instead she woke up to her husband yelling.

"There was this sound in his voice, and he's not a big yeller," Pittman recalled. "I jumped up and there is six inches of water in the back of our addition and it's flowing like a river."

One person killed as a result of flooding in Baton Rouge; area inundated with water

A man was killed as a result of flooding Thursday, Baton Rouge Mayor-President Sharon Weston Broome confirmed during a news conference, which …

It was unfortunately not the first time. Since they purchased their home in August 2015, a portion of it has flooded repeatedly. Pittman said the prior seller did not disclose the problems. But even so, Thursday's flooding was as bad as she can remember and it made her "extremely nervous" that it would get into the main house.

That didn’t happen, but two of their cars were flooded. She said she's hoping they're not totaled, but the family borrowed a car to drive to the airport just in case.

Pittman criticized the city government for an apparent lack of action to improve drainage in the Mid City area, which saw cars and businesses flood Thursday in addition to some homes.

Mayor-President Sharon Weston Broome opened a City Hall news conference about the weather with a moment of silence for William Jackson, 37, whose car was overtaken by water in a railroad underpass along Chippewa Street. First responders rescued Jackson, but he died later at a hospital. A fire department spokesman said the water was 14 feet deep in the underpass.

Melissa Smith, who has lived in a subdivision off Perkins Road for almost 30 years, said Thursday marked the first time her house has ever taken in water: a little over an inch, which she described as "cleanable but still irritating."

"We shouldn't flood. We didn't flood in 2016," she said. "I will tell you why this is happening. It's because the ditches are not being cleaned out. They're building all these new subdivisions without thinking about where the water can go."

Watch: Woman rescued from 7 feet of water in Baton Rouge; now she wants to thank her rescuer

A woman became trapped inside her car in a ditch filled with nearly seven feet of water Thursday morning.

Smith noted that the southeastern portion of the parish has seen significant new construction over the past several years, which she believes has exacerbated flooding issues.

"There are massive subdivisions being built in a swamp," she said. "This is a drainage issue, and it's the city's issue. I think we're over-building and we're not taking care of the drainage system that we have."

Residents also brought up the issue of people driving through residential neighborhoods, creating a wake that causes houses to flood that otherwise wouldn't. A state law took effect last year that classified driving in flood waters and creating a damaging wake as "careless operation of a motor vehicle." It's unclear whether anyone was ticketed Thursday under the new law.

Some Baton Rouge businesses were also inundated Thursday morning. Mestizo, a popular Mexican restaurant on Acadian Thruway near Interstate 10, is closed until further notice due to flooding.

She blamed the flooding on poor drainage around Acadian, which often becomes impassable during and after heavy rain. Mestizo took on 5-6 inches of water early Thursday morning.

"It could be a lot worse," Musacchia said. "Overall, we were pretty fortunate."

Eddie Puckett, owner of Downtown Towing Service in Baton Rouge, said that calls to his business were nonstop through most of Thursday.

"'People were calling, saying, 'The water's coming into my house! Can you please come get my car out?'" Puckett said. "It was almost like the '16 flood."

Outside The Advocate's office near Siegen Lane at Interstate 10, a passing motorist jumped into 7 feet of water to rescue a motorist whose car had been swept into a roadside ditch — then left before anyone could acknowledge his heroism.

Meanwhile, in Walker, Chris Hodges had just finished wading through the high water to check on his house off Pendarvis Lane. Colyell Creek had overflowed its banks near the front of Hodges' neighborhood and spilled out into the residential area off Walker South Road just north of I-12.

Hodges, 32, said his house avoided flooding but the water seem to be getting deeper farther into the neighborhood.

Walker Police Chief David Addison said there was widespread street and some house flooding, including putting 2 inches of flood water in his own house.

"It's just all over town," he said, adding that the department made rescues on Travis and Clark streets and was controlling access to flooded streets to prevent drivers from pushing wakes into people's homes.

Farther north of Pendarvis, off Walker North Road, the overflowing Dumplin Creek covered Keith and other streets on both sides of the Canadian National railroad tracks. Neighborhood residents stood on raised porches and on the elevated tracks, waiting for the water to go down.

Daniel "Gipp" Williams said he was trying to wait out the high water but also worried about his mother's grave. He said she's buried in an old graveyard nearby that was flooding Thursday and had also flooded in August 2016.

He said his mom's grave didn't come up that time, though "she was a-rocking."

"I sure hope she stays put," Williams said.

Local radar indicates at least six tornadoes moving through southeastern Louisiana on Thursday morning, according to a report from WAFB.