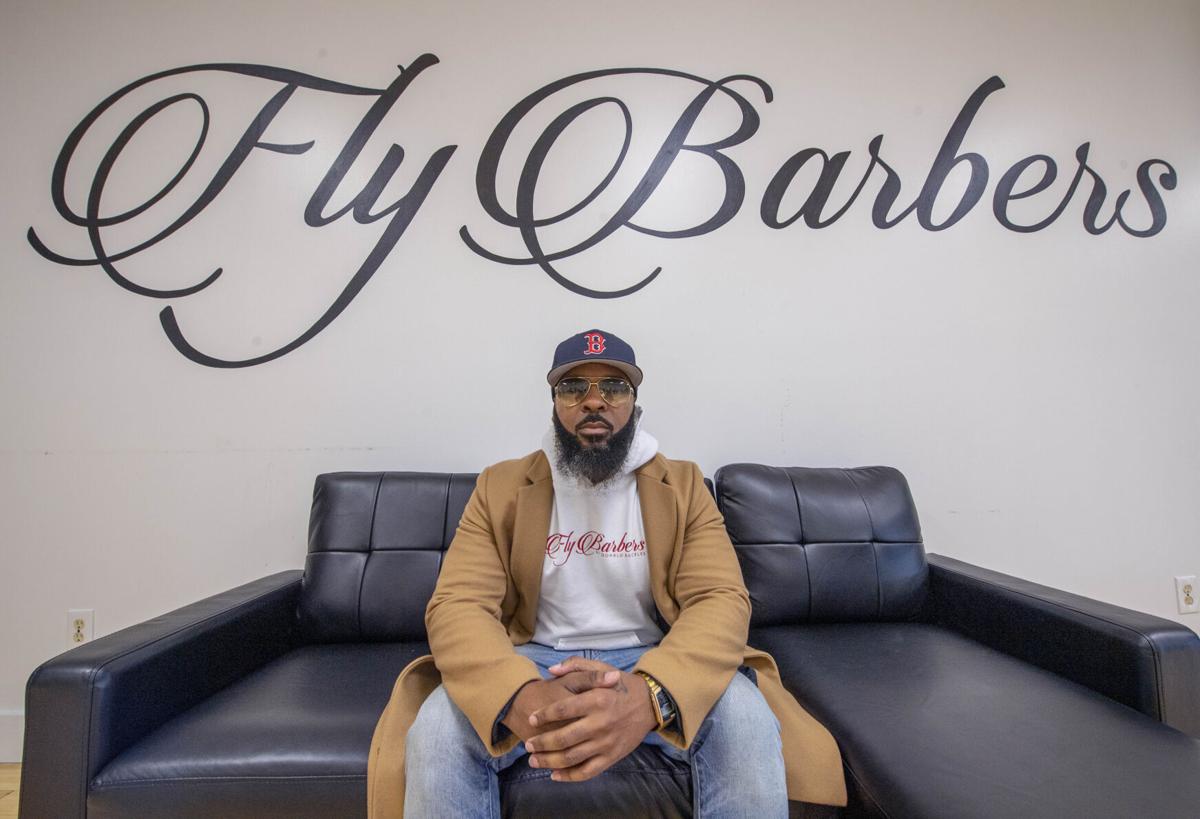 Donald Buckles, owner of FlyBarbers in Baton Rouge, cuts hair on Dec. 15. Buckles' shop is located in the Coursey/Sherwood area, which saw a big jump in diversity during the last decade, with an exodus of White people and an influx of Black and Hispanic people. Buckles' barbershop is one of many businesses in the area catering to an African-American clientele. 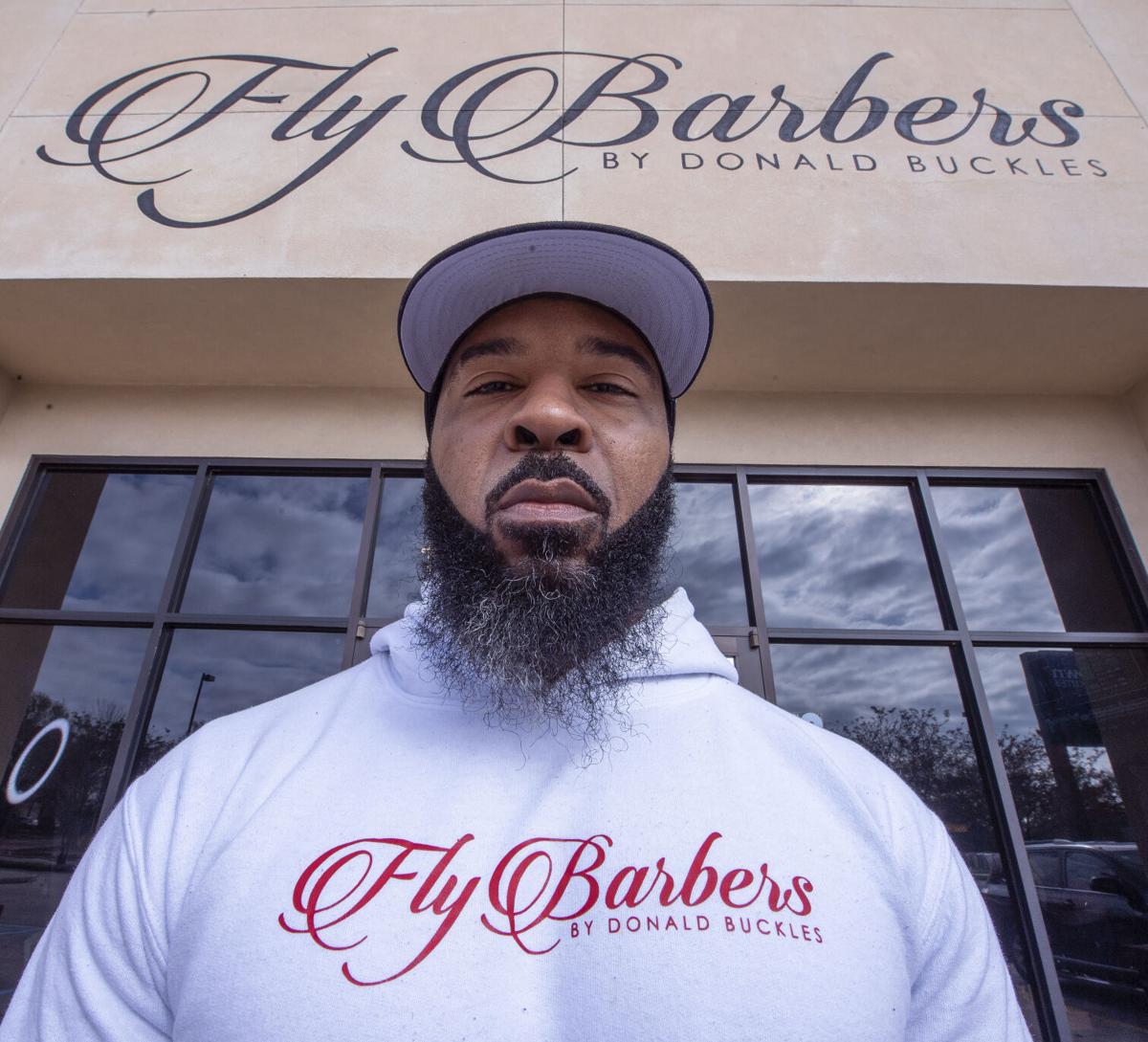 Donald Buckles, the owner of FlyBarbers in Baton Rouge, photographed on Dec. 15. Buckles' shop is located in the Coursey/Sherwood area, which saw a big jump in diversity during the last decade, with an exodus of White people and an influx of Black and Hispanic people. Buckles' barbershop is one of many businesses in the area catering to an African-American clientele. 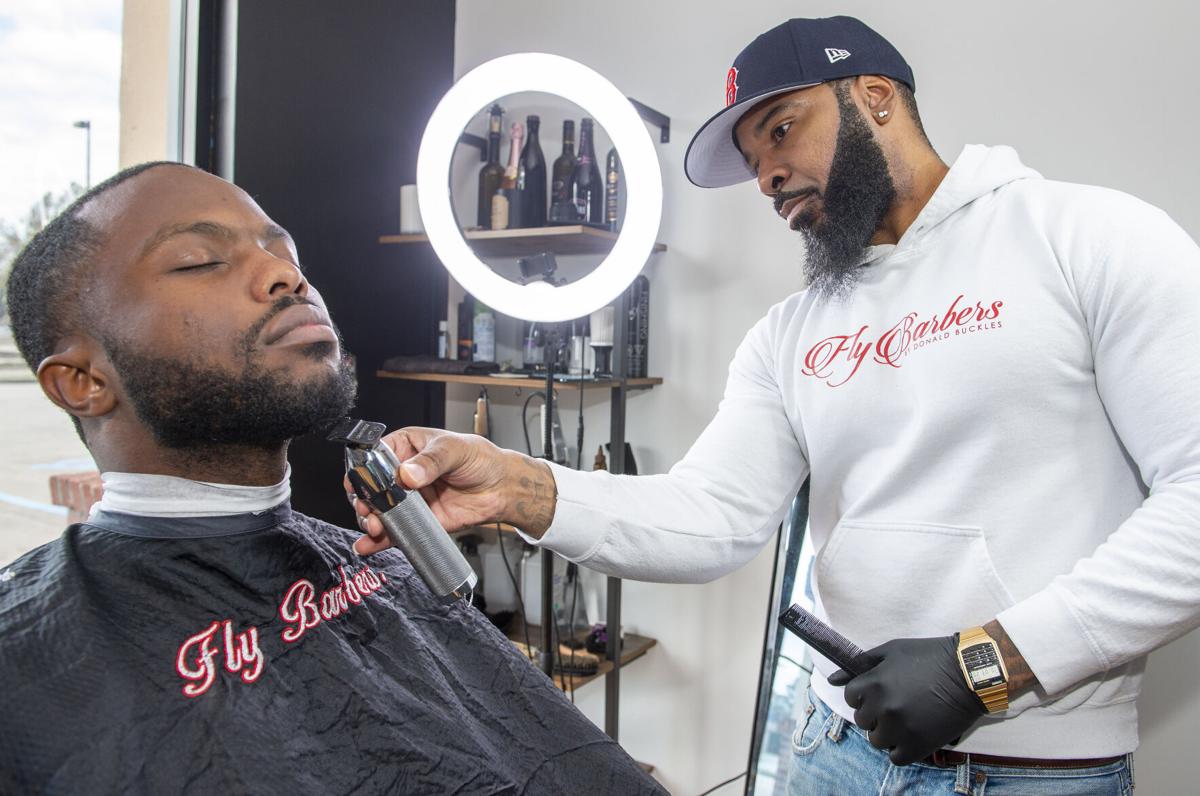 Donald Buckles, owner of FlyBarbers in Baton Rouge, cuts hair on Dec. 15. Buckles' shop is located in the Coursey/Sherwood area, which experienced a big jump in diversity during the last decade, with an exodus of White people and an influx of Black and Hispanic people. Buckles' barbershop is one of many businesses in the area catering to an African-American clientele. 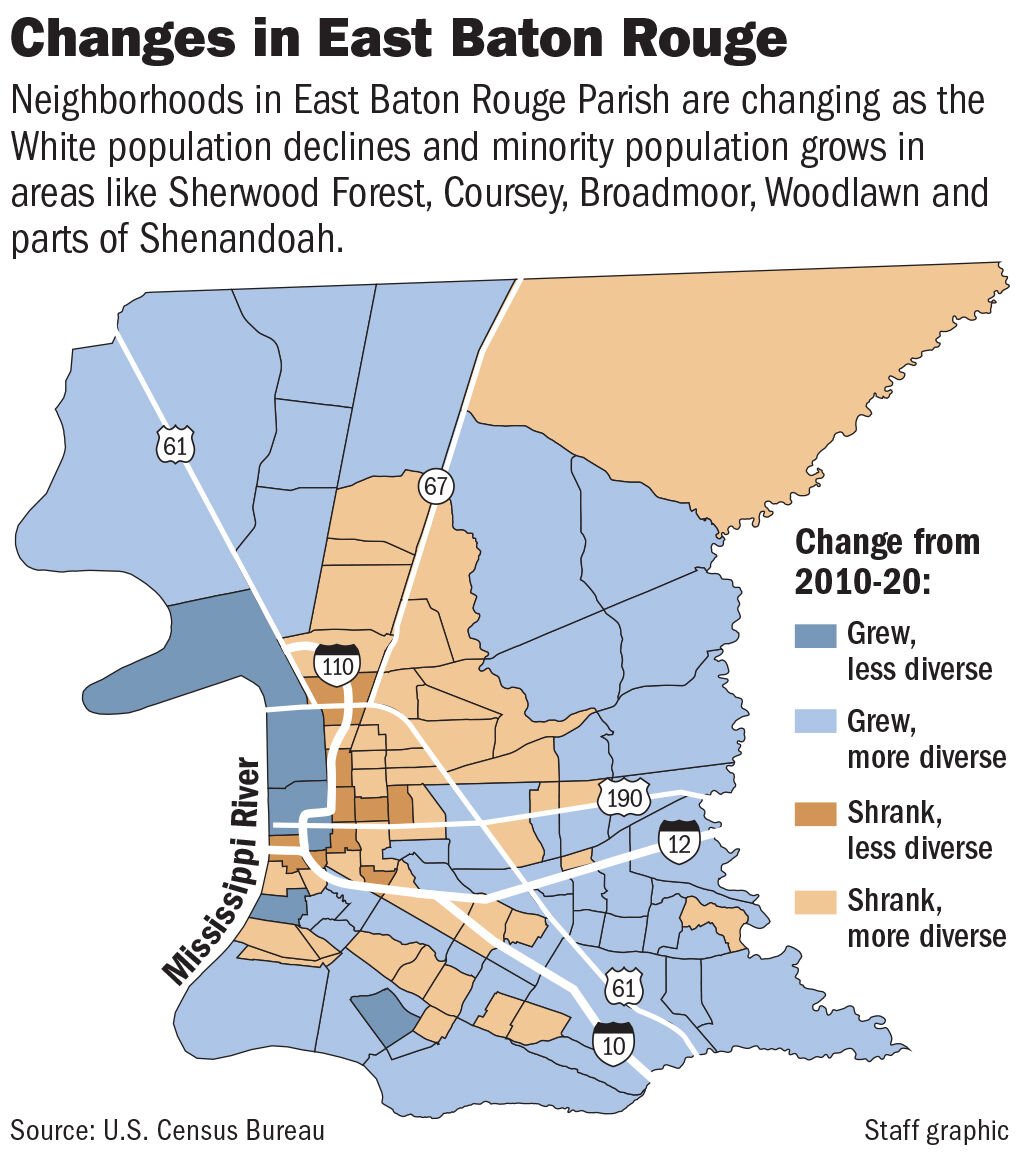 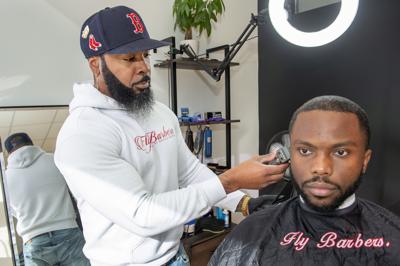 For a few moments on a recent Saturday, the room quieted as Donald Buckles flashed his precision with an old-school straight razor.

Buckles, a Scotlandville native who was practically born into barbering, held the razor in one hand and wore a rubber glove on the other. He zeroed in on the task, evening and straightening the inside edges of a narrow beard.

"The details are extremely important in this line of work," Buckles said.

The nephew of the owner of well-regarded shop off Plank Road, Buckles has been cutting hair since he was 14. He moved his barbershop a year ago from the Zachary area to a new spot on Sherwood Forest Boulevard just south of Coursey Boulevard.

The changes in a few of Baton Rouge's older suburbs track national trends revealed in the 2020 census and in earlier research showing that the suburban areas closest to major cities — once built to meet the demand of White flight — have become quite diverse.

When Census Bureau officials announced the latest findings of the 2020 census in August, two of their important takeaways were that the nation grew at its slowest rate since the Great Depression and that the country was continuing to diversify.

One of the focal points for diversification over the last decade is a familiar one, the old "inner ring" suburbs of metro areas that have long been a hot spot for change.

Between 2010 and 2020, nearly 270,000 White Americans left "mature" suburbs for more distant exurbs, even as those older "inner ring" neighborhoods grew overall by nearly 9 million people, according to an analysis from Brookings Institution demographer William Frey.

These shifts come as the overall makeup of the country approaches a day, mid-century, when White people will no longer be in the majority. In 2020, for the first time since the nation began census counts in 1790, a decennial census found a decline in the nation's White population, according to another Frey analysis.

A rural Delta town withers amid population loss. It represents a broader trend in Louisiana.

WATERPROOF — Chuck Barice stomped around the remnants of a former department store on Main Street, cleaning up what was left — mostly bricks a…

The nation's 7.4% growth rate since 2010 came entirely from minority and mixed-race or ethnicity groups over the past decade, Frey found.

Part of the decline in the White populace owes to improvements in the way the census counts mixed-race residents, but it's also due to an aging White population with a declining birth rate, Census Bureau researchers say.

Those same national patterns can be seen in East Baton Rouge Parish.

The Black population, meanwhile, grew by 6,960, and Black people became the largest racial group in the parish, with 45% of the populace.

The changes raise significant implications as local leaders debate how to fashion new local government districts and as the future of the St. George community awaits legal resolution.

"We’ll need to look at what districts make the most sense to make adjustments and I think the data will tell us that. I couldn’t tell you what they are right now," Metro Council Mayor Pro Tem LaMont Cole said.

More Louisianans are flocking to areas at risk for severe weather. What's it mean for the future?

MAURICE - Growing up, Virginia native Michael Dameron spent every summer in south Vermilion Parish with his father and grandfather fishing for…

Data show swaths of heavily White areas have become less so, in some cases because of the loss of White residents and the growth of minority populations. In other areas, such as the parish's development fringe in the southeast, the trend has been driven by sharp increases in minority populations that have outpaced White population growth.

The trends have blurred the mythical racial barrier at Florida Boulevard or Government Street that has been long seen as a north-south, Black-White dividing line in Baton Rouge. Since 2010, areas south of Florida have become more Black and Brown.

At the same time, parts of northwestern Baton Rouge, older parts of the city and parish that have traditionally had strong Black majorities, have seen population losses, despite efforts to reinvigorate the economy. They did not see an increase in diversity, however.

Coursey area, a study in change

Buckles, 37, a married father, grew up with a passion for barbering. A mentor at Baker High School encouraged leadership qualities in him that led him to open a small business.

Businesspeople, he said, must have a vision for the future. He had been trying to find a spot downtown or in Mid-City for him and his three employees, but was unable to nail down a lease. He became intrigued by the Sherwood/Coursey area, where a few other Black-owned businesses like The Grind and Quarters and Boil and Roux have found a home.

Their presence helped him settle on the small strip mall that he shares with the Bay Leaf Indian food restaurant. Cinco de Mayo celebrations at nearby businesses were eye-opening, Buckles said.

New minority residents have indeed been on the rise in the neighborhood. They've boosted the overall population by nearly 5% since 2010, despite sharp declines in the White population.

The area is bounded by Airline Highway on the west, Tiger Bend Road on the south, Old Hammond Highway on the north and Millerville, South Harrells Ferry and Jones Creek roads on the east. It encompasses parts of Coursey and I-12 and is home to the private Episcopal and Parkview Baptist schools and the public Cedar-Southmoor and Parkview elementary schools.

The area's population has risen by about 5% since 2010, even with the White population falling by 22%, census data show.

Meanwhile, the Black population rose by almost 22%, the Asian population by 46%, the Hispanic population by 92% and mixed-race people by 181%. Black and Hispanic residents added around 2,340 and 1,900 new people, respectively.

The result: White residents are no longer in the majority. They now make up just 42% of the area's population, compared to 56% in 2010.

Parts of northern Baton Rouge "don't necessarily provide the value, the resources and the opportunity that they once did and so people with the means are coming down farther south," Thompson said. "And even though Coursey and Sherwood aren't the most new and happening areas, they are the most convenient to the places most people live and work in."

Marcia Plummer, of Keller Williams Realty, helped investors buy flooded properties after 2016. She said the disaster created an opportunity for people to pay affordable prices for older homes with considerable space and more land than some newer homes.

"It was mostly older people that owned, so when it flooded, they either downsized anyway and moved in with family members, and that's when you saw the opportunity for other, you know, diverse people to move in, I guess. So, in an area that was predominantly White, I feel like that's when the demographic probably changed a little bit," she said. "Because of the flood."

Thompson said the opportunities from the flood have ebbed, but people are still looking south.

Plummer said Black and Brown buyers are also looking farther south, into new homes closer to the parish line and in Ascension and Livingston parishes.

"It's not that they're just moving in that area there," Plummer said. "They're moving in the outskirts too, also for a better school system and everything else."

The St. George area in southeast East Baton Rouge grew by nearly 16% in the past decade, and most of that growth has come from rising numbers of non-White minorities, census data show. Whites have contributed a little less than a third of the new population in the past decade.

The growth in St. George's minority population expands on a trend from the prior decade.

As a result, between 2000 and 2020, White residents' share of St. George's population fell from 81% to 66%, still a strong majority but a rapidly declining one.

Backers of the St. George incorporation movement say the new census numbers support their contention that their effort was never about White flight, as critics have long argued.

“Guess what? Opportunities exist in St. George. That’s why people want to move here,” said Drew Murrell, spokesman for the incorporation effort. “It makes sense. Everyone wants the same thing: to raise a family in a place that feels safe, and they have opportunity to thrive. That’s what St. George has always been about.”

After the first petition drive to create what could become the parish’s fifth city failed, organizers carved out new boundaries that excluded all the areas where minorities were heavily concentrated. That bolstered claims that the St. George effort was racially motivated.

But St. George proponents countered the decision had nothing to do with race; rather, it was aimed at cutting out areas most resistant to incorporation. Murrell stands by that position today, two years after the remaining voters decided to support the creation of a new city.

"We just didn’t have the census data at the time to prove that," he said.

Metro Council members are just starting to grapple with the implications of a larger parish and an evolving racial and ethnic makeup. Redistricting discussions are expected to start at the first of the year.

The Metro Council has yet to hire a demographer, but advocacy groups like the NAACP have already threatened to sue the council should new district lines for the 12-member body not properly reflect the parish’s growing racial diversity.

With the parish’s total population count coming in at 456,781, new council districts will have to be redrawn to contain approximately 38,000 residents apiece.

The highest concentrations of White population losses and Black and Hispanic population gains mostly occurred in suburban areas, particularly in Council Districts 1, 4, 8, 9 and 3.

The greatest potential for a new minority-majority district could arise from District 1, which encompasses a large swarth of the northern end of the parish, including Zachary.

Councilman Brandon Noel, who represents the area, said he’s aware he may have to lose some of his current district based on his early assessment. But he also hesitated to go into further details without a clearer picture for whomever the council hires as a demographer.

“I’m always prepared to have a discussion. By and large, every council person will be looking to self-preservation — that’s for any politician seeking reelection,” Noel said. “There are going to be outside influences one way or the other no matter how this goes."

State Rep. Sam Jenkins says his House district within the city of Shreveport is compact enough that he would have noticed stores closing and h…