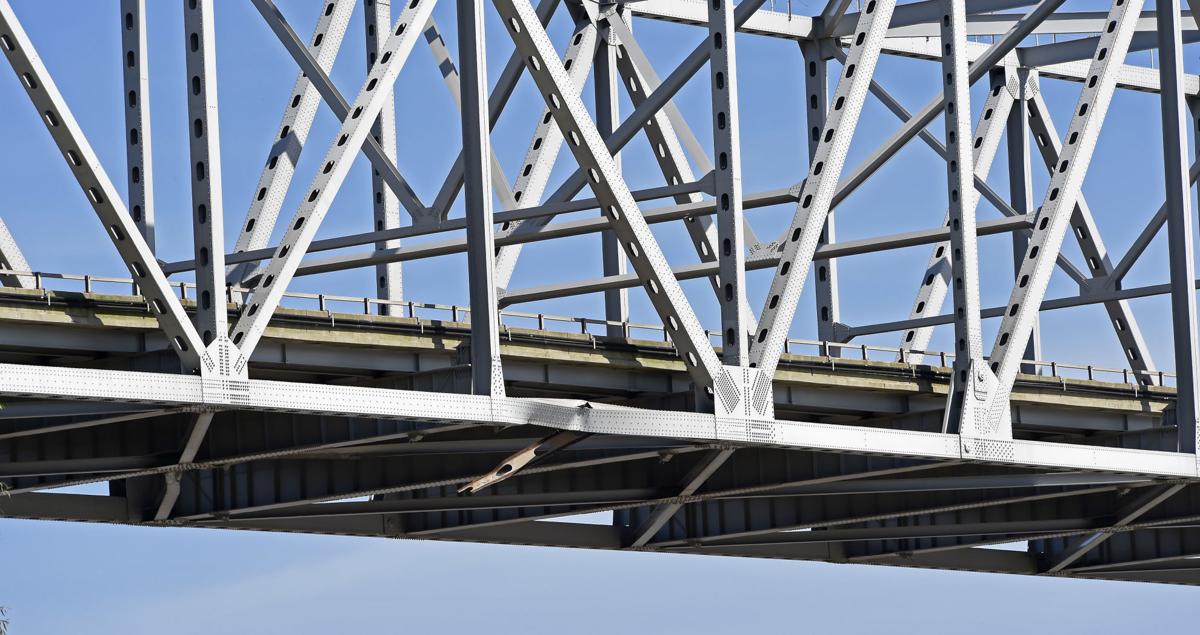 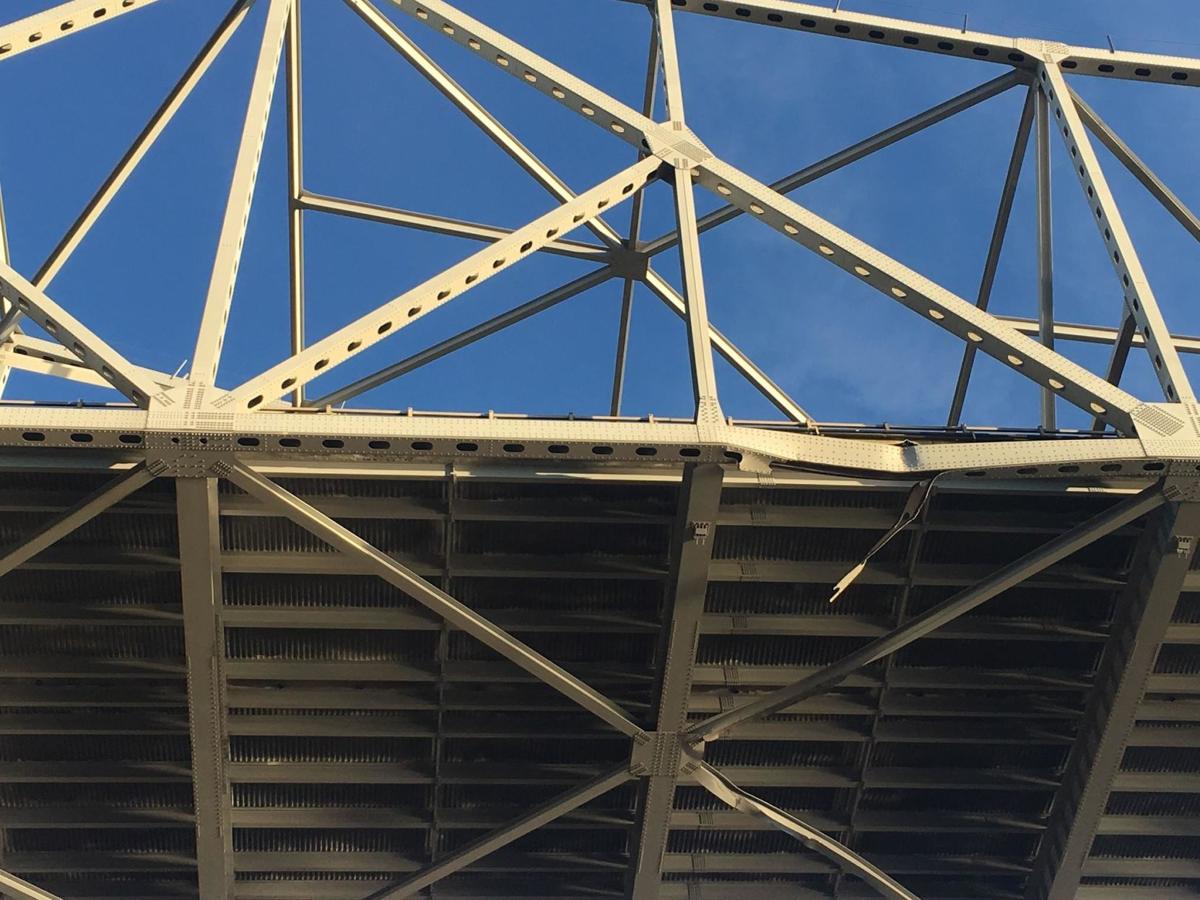 An image shared from below the Sunshine Bridge in Donaldsonville shows the damage that has the bridge closed indefinitely after a barge crashed into it Friday morning (handout photo).

An image shared from below the Sunshine Bridge in Donaldsonville shows the damage that has the bridge closed indefinitely after a barge crashed into it Friday morning (handout photo).

GONZALES — Louisiana highway officials said Monday that the Sunshine Bridge over the Mississippi River won't reopen any time soon after it was damaged in by a crane barge last week, and also said they couldn't reopen the nearby White Castle ferry, which was abandoned five years ago amid state budget cuts, as a temporary fix.

Repairing the Sunshine Bridge could take "months rather than days," the Louisiana Department of Transportation and Development said. The agency had hoped to at least allow two-lane traffic on what had been the westbound side of the span, but continues to find problems with the 1½-mile-long bridge.

While the Sunshine Bridge remains indefinitely closed after a barge-mounted crane crashed into the bridge Friday, the Plaquemine ferry is exte…

"Key load-carrying components of the bridge suffered significant damage" after being rammed early Friday and the bridge isn't safe to carry any traffic, DOTD officials said after inspections Monday. "Because of the extensive damage, permanent repairs to the bridge are necessary prior to reopening it to vehicular traffic. The Department continues to find damage to the structure."

With the bridge closed, the highway department is suggesting that motorists travel via Gramercy, about 20 miles south, or the ferry at Plaquemine, 28 miles north. The agency said reopening the White Castle ferry 10 miles from Donaldsonville was not an option.

DOTD officials said Monday they are not yet at a point yet were they could even release a timetable for bridge repairs. After engineers decide what should be done, the work needs to be successfully modeled so the department has a better idea of "what resources are needed and available," the agency said. "At this point, the potential timeline is believed to be months rather than days."

Marquette Transportation, based in Kentucky, operated the towboat that ran the crane barge into the southwest side of the bridge around 2 a.m. Friday. Marquette is the same company that was operating the towboat that crashed barges into Mardi Gras World in New Orleans this year, an accident that is still being investigated by federal transportation officials. The U.S. Coast Guard is investigating the Sunshine Bridge collision. Marquette has pledged its cooperation.

The bridge carries major commuter traffic for plants and other businesses in the river corridor and also serves as a key connector in Ascension Parish, including for parish government and school system workers and public school students.

In 2015, the Sunshine Bridge carried nearly 23,000 vehicles per day, the latest data available show. For an urban comparison, consider Perkins Road at College Drive in Baton Rouge — a major route relatively close to LSU that carries about the same amount of traffic — and draw a 38-mile detour.

In the hours after the early morning crash Friday, DOTD officials offered at least the chance that some portion of the bridge could be reopened, possibly with some temporary repairs first. But Sunday and again on Monday, DOTD officials made clear that wasn't a possibility.

“The damage is to key members of the bridge and has rendered it unsafe to traffic,” DOTD Secretary Shawn D. Wilson said. “While we have identified a contractor and are moving forward with expediting this work, it is important to know there is not an easy fix for this kind of damage. There is no temporary fix that will allow us to safely open the bridge.”

DOTD officials said reopening the White Castle ferry would require a "lengthy process to implement a new ferry route." The U.S. Coast Guard would need to approve a route, and DOTD no longer has access to the ferry landings.

"We would be required to obtain access from landowners and permission to build on the levee by the (U.S.) Corps of Engineers," DOTD said.

Along with those in St. Francisville and Melville a few years earlier, the White Castle and Edgard/Reserve ferries closed in 2013 as a cost-saving measures amid continued, annual budget shortfalls during the latter years of former Gov. Bobby Jindal's administration. DOTD officials said at the time that the White Castle ferry carried 51,000 vehicles per year and the closure would save the state $1.3 million per year.

The old ferry landing in White Castle is about 10 miles northwest of Donaldsonville, and about 20 river miles north of the Sunshine Bridge, which is in St. James Parish.

Online mapping sites say that detouring from the foot of the Sunshine Bridge on the west bank to the La. 22 interchange at I-10 in Sorrento on the east bank is about 46 miles and takes about an hour. Without the detour, the trip covers a little over eight miles and takes about 10 minutes.

The operator of a crane barge that slammed into the Sunshine Bridge at Donaldsonville early Friday, shuttering the critical span, has a histor…

How is loss of Sunshine Bridge and increased traffic being handled? Two key changes