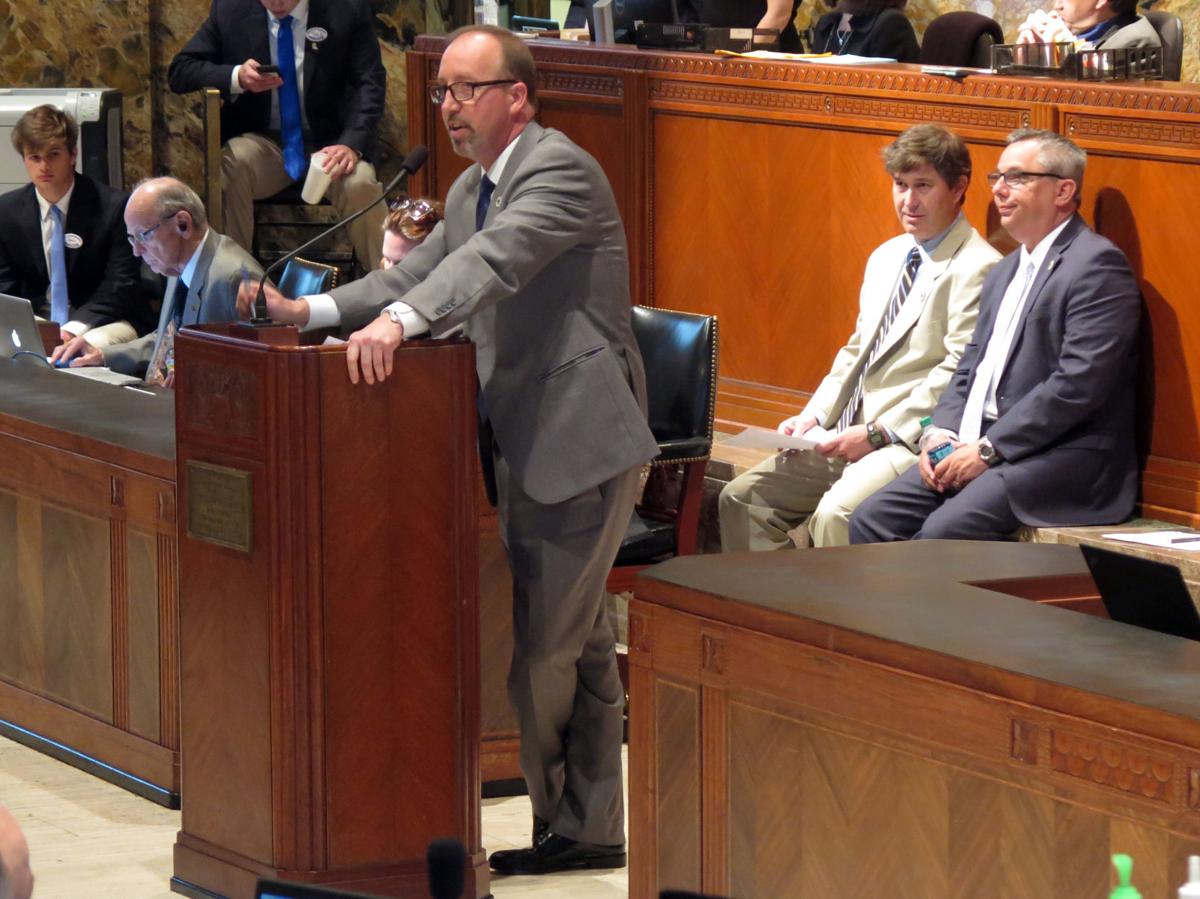 State Rep. Joe Marino III, No Party-Gretna, speaks in opposition of legislation to lengthen probation terms. House Bill 195 is sponsored by Rep. Sherman Mack, R-Albany, is seated behind on the right who is with Rep. Kirk Talbot, R-River Ridge, on the left. 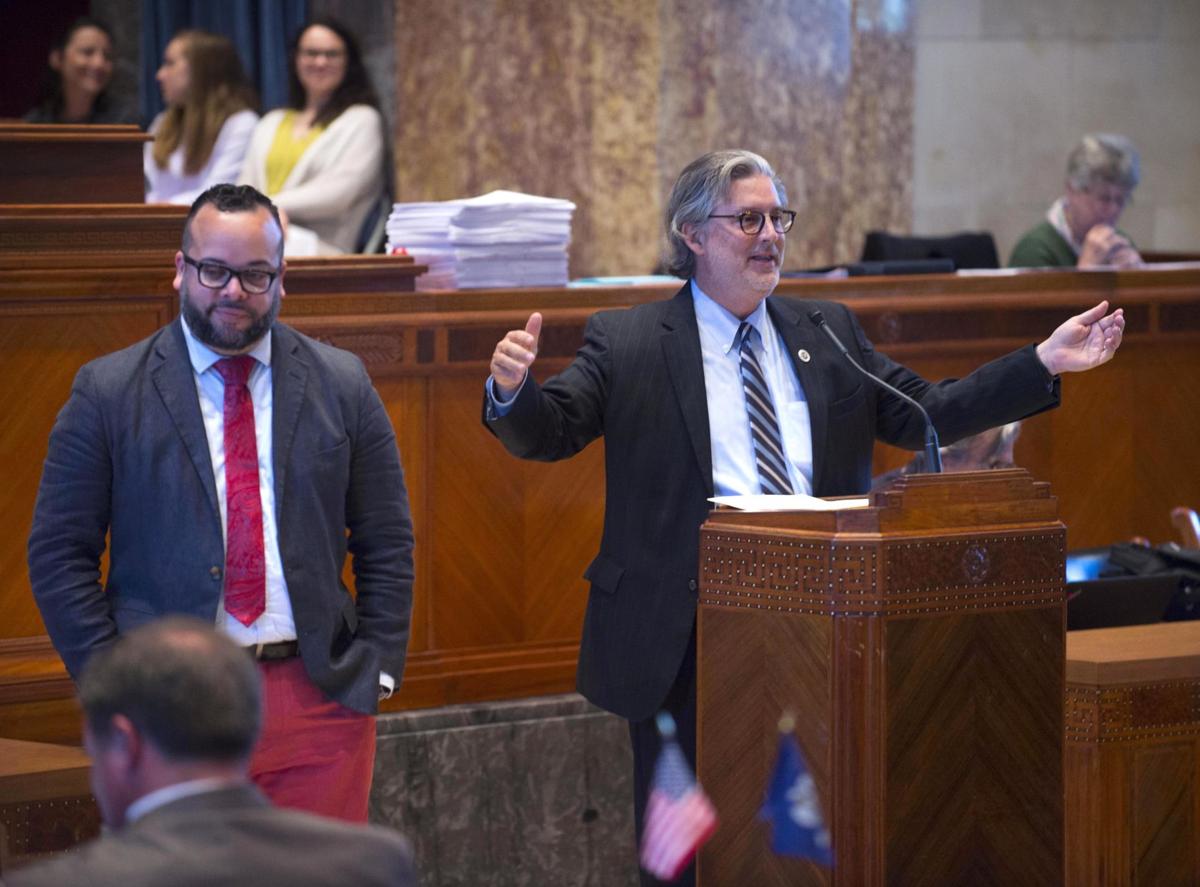 Sen. Dan Claitor, R-Baton Rouge, right, lauds Sen. JP Morrell, D-New Orleans, left, for having the courage to sponsor what Claitor said would be an unpopular bill, SB243, but one that Caliator supported, before the Senate voted to passed a bill, that would let voters decide whether Louisiana should remain one of only two states in the U.S. that allow criminal juries to reach a verdict in serious felony trials on a split vote, Wednesday, April 4, 2018 at the State Capitol.

State Rep. Joe Marino III, No Party-Gretna, speaks in opposition of legislation to lengthen probation terms. House Bill 195 is sponsored by Rep. Sherman Mack, R-Albany, is seated behind on the right who is with Rep. Kirk Talbot, R-River Ridge, on the left.

Sen. Dan Claitor, R-Baton Rouge, right, lauds Sen. JP Morrell, D-New Orleans, left, for having the courage to sponsor what Claitor said would be an unpopular bill, SB243, but one that Caliator supported, before the Senate voted to passed a bill, that would let voters decide whether Louisiana should remain one of only two states in the U.S. that allow criminal juries to reach a verdict in serious felony trials on a split vote, Wednesday, April 4, 2018 at the State Capitol.

Jane Johnson, head of the ACLU of Louisiana, called 61-30 vote on House Bill 195 by Rep. Sherman Mack “a wakeup call: the criminal justice reform package is under attack.”

“That Mack bill has to die. It is direct blatant affront to what we’ve done,” said Will Harrell, senior policy counsel for the New Orleans-based group VOTE, which has been seeking alternatives to incarceration.

This isn’t new territory for Harrell. Every state he has worked that passed the revamp, lawmakers have returned the following year to try and undo what was approved.

For opponents, the hope is Louisiana senators will kill HB195, and other rollback measures waiting in the wings, without further ado. But that might be wishful thinking as the chair of the senate committee charted to hear the bills, perhaps as early as this week, said the legislation speaks to a real issue – probationers not fulfilling their obligations – that needs to be addressed.

About a dozen bills are moving through the process that would tweak the system put in place in November. But only six are at the center of the roll back imbroglio: HB195 and five measures that deal with victim restitution, which opponents say undermine the criminal justice revamp.

“I appreciate their point of view that these bills are a roll back,” said Sen. Dan Claitor, the Baton Rouge Republican who chairs Senate Judiciary C committee, where bills will be heard.

“That’s the collision there: You say roll back and I say a fair correction,” said Claitor who once was an assistant district attorney in New Orleans.

With the support of many Democrats and Republicans, businessmen and clergy, last year’s package of 10 bills changed the way the state sentences by diverting criminals into rehabilitative programs. The effect is to reduce prison time for nonviolent offenders in a state that leads the world in imprisoning its own citizens.

Louisiana expects to reduce prison populations by 10 percent and save at least $262 million over the next decade, thereby cutting into the $625 million taxpayers spend annually on adult corrections. About $184 million of that amount would go to train inmates, drug rehabilitation, and other programs to help them adjust to the outside world, as well as for victims services and law enforcement, which will lower crime and reduce recidivism.

The Department of Corrections is projecting savings of $16.3 million in the first year of these reforms, more than $10 million above initial estimates. Only about 4 percent of people released early under these changes on Nov. 1 have been rearrested.

But it hasn’t all gone smoothly.

Chanting “no roll back,” several hundred people marched Tuesday on the State Capitol in opposition to legislation they say would significantly…

Some sheriffs have complained. And judges noticed that some probationers were opting to wait out the 36 months rather than fulfill the obligations that kept them out of prison.

Ricko Canaz Ball is a career criminal undeterred and unrehabilitated by years behind bars. Twenty years ago, his crimes included stealing a mi…

“We are not trying to undermine what was passed last year,” said Pete Adams, the executive director of the Louisiana District Attorneys’ Association, which supports HB195 and the five restitution bills. He has negotiated with Gov. John Bel Edwards who opposes returning the probation term to five years.

Prosecutors want to correct some of the practical applications the new law has exposed, he said. Adams was honored by the Louisiana Family Forum, a conservative faith-based advocacy group, for his work in getting the criminal justice package passed last year.

Prosecutors have seen a lot anecdotal evidence that some of the inmates released early have committed more crimes. “If the prosecutors really wanted to change what was approved last year, press releases highlighting those crimes would be released on a regular basis,” Adams said.

As head of the House Administration of Criminal Justice Committee, where the revamp bills are heard, Mack is unapologetic about HB195, which he says would give judges the ability to extend probation terms from three to five years to ensure offenders complete their programs.

He didn’t vote for the Criminal Justice Reinvestment package – it was considered way too fast for his taste – and he would vote to repeal the overhaul in its entirety if given a chance.

“But it is the law now and I was asked to carry this bill,” Mack said Friday. “I can see where they would think it’s a roll back. But I see it as a way to address an unintended consequence.”

For instance, drug addicts who steal to feed their habit had once been sent to prison. The new law includes a better chance to serve their sentences on the outside provided they’re employed, attend drug counseling, repay their victims and are drug screened regularly.

Those programs, however effective, are difficult. Some probationers are choosing to duck those obligations and wait out whatever remains of their three years, he said.

Judges need a hammer to ensure probationers complete their terms, Mack said. And the ability to stretch out the probation term, if need be, gives judges that tool.

“Otherwise, their only option is to send them to prison,” Mack said. About half of prison admissions are for people who failed on probation or parole.

The other part of this calculus is the requirement that offenders pay restitution to the court and to their victims, which sometimes can total hundreds of thousands of dollars. Failure to repay means returning to prison.

Five bills – House Bill 111 and Senate Bills 268, 389, 213 and 522 – address the problem in different ways, though all would require total repayment. Opponents say that would lead to sending people to a debtor’s prison, which is forbidden under federal law.

Claitor says he and other legislators are looking for a way to consolidate most, if not all, the bills under one piece of legislation that would address the issue. Negotiations are still underway, but he prefers the idea of turning the debt into a nondischargable civil judgment. That would allow the offender to go out into the world without fear of jail, but still require repayment over time.

The criminal justice overhaul was the product of much compromise, so tweaks to the way the system works is expected, Rob Tasman, the executive director of the Louisiana Conference of Bishops, said in an interview Thursday while standing in a State Capitol hall.

“This is normal, to come back and do some these changes,” Tasman said. “But I would hate to see that as something that takes back some of the reforms made last year.”

Tasman was with the Rev. Gene Mills, who heads the Louisiana Family Forum and was another major supporter of the criminal justice revamp.

He agreed with Tasman’s assessment.

“I don’t see bad intentions here. I see good people raising legitimate concerns and trying to address them,” Mills said. “I’d hate to see a roll back, but I’m optimistic. I think we’ll come to a resolution here.”

Louisiana has one of the highest incarceration rates in the world. At almost double the national average, our incarceration levels cost our st…