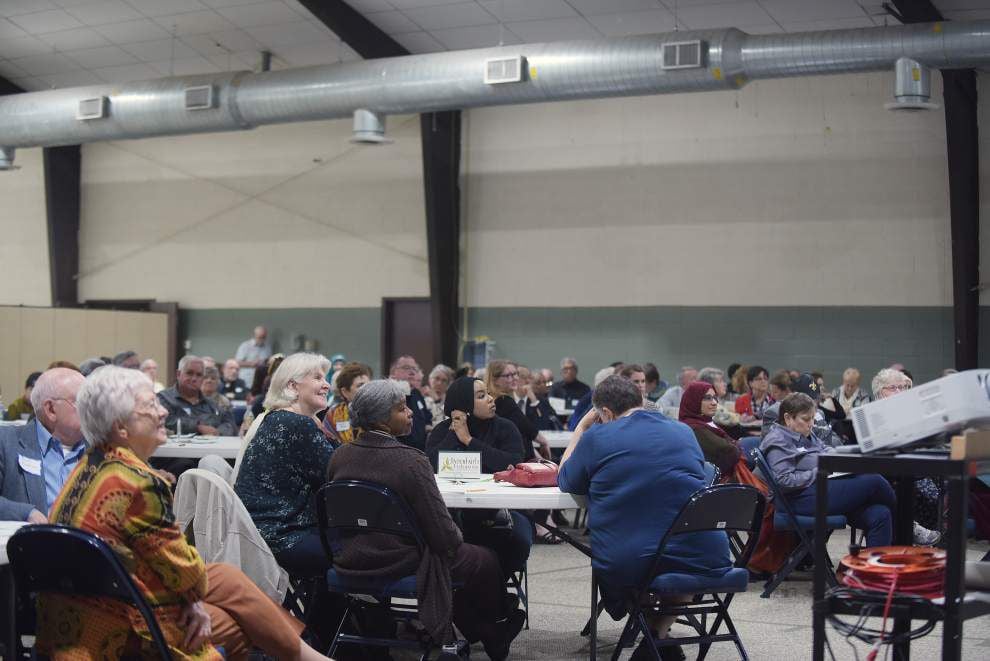 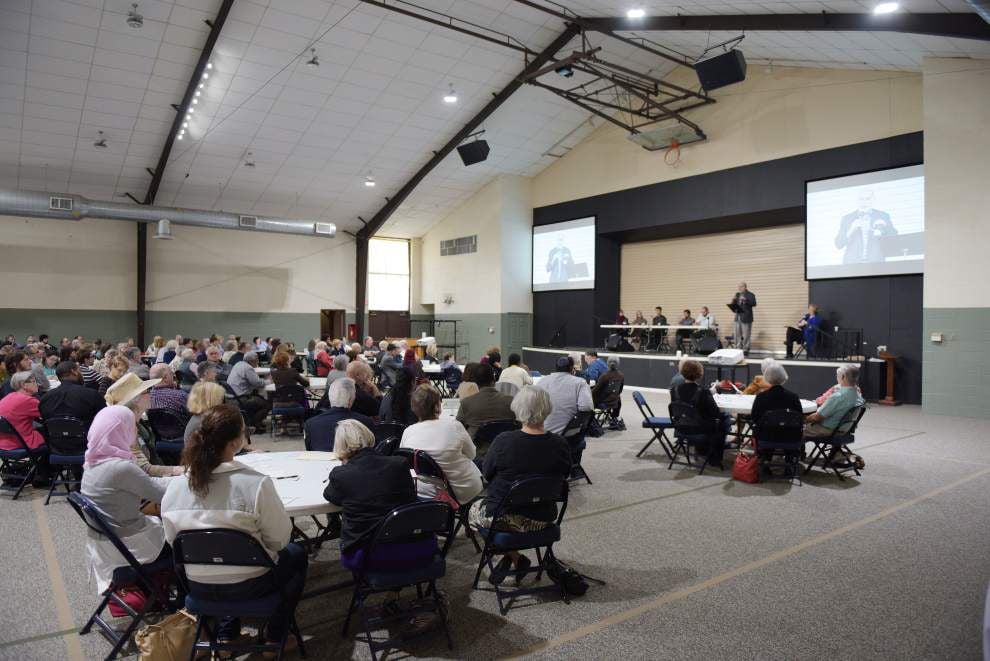 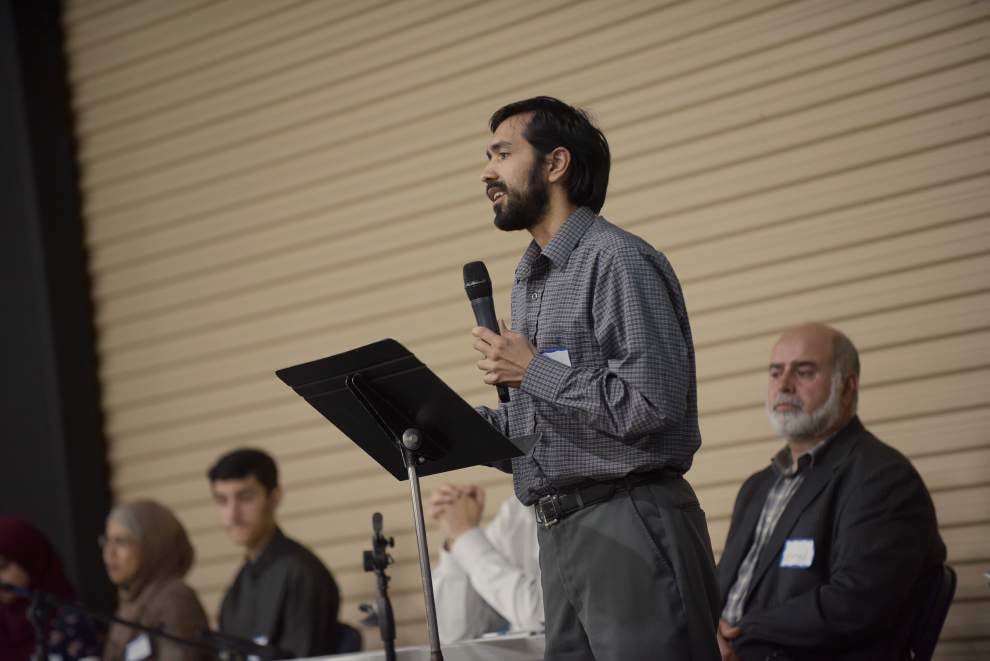 Advocate staff photo by CHARLES CHAMPAGNE — Ali Abidi speaks about pilgrimage in the Muslim faith Sunday, Jan. 31, 2016 during A Dialogue with Muslims sponsored by the Interfaith Federation and held at the Broadmoor United Methodist Church. 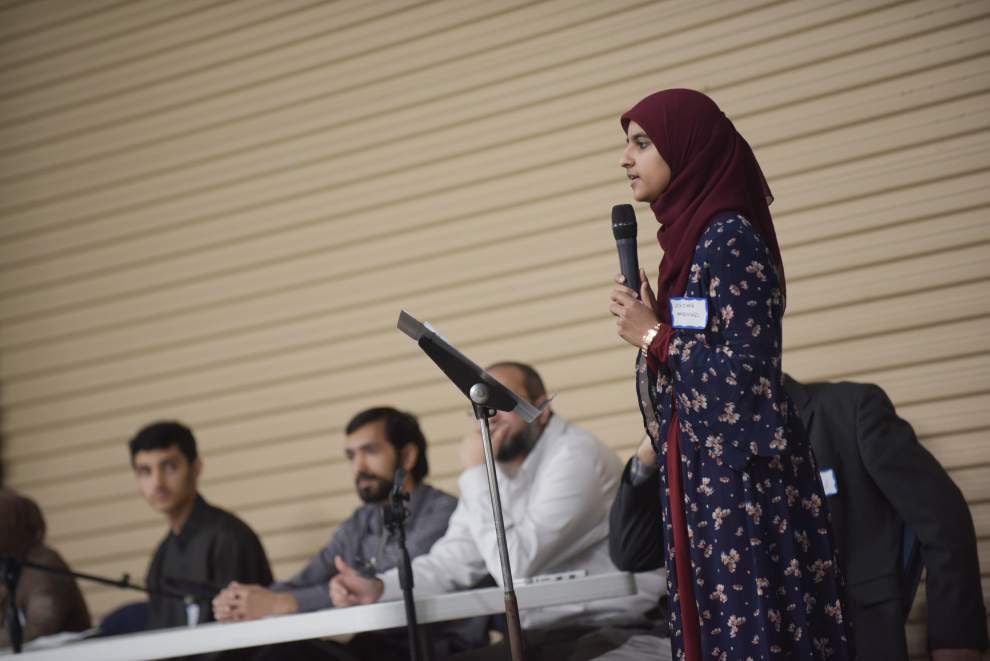 Advocate staff photo by CHARLES CHAMPAGNE — Zainab Ahmad speaks about daily prayer in the Muslim faith Sunday, Jan. 31, 2016 during A Dialogue with Muslims sponsored by the Interfaith Federation and held at the Broadmoor United Methodist Church.

Advocate staff photo by CHARLES CHAMPAGNE — Ali Abidi speaks about pilgrimage in the Muslim faith Sunday, Jan. 31, 2016 during A Dialogue with Muslims sponsored by the Interfaith Federation and held at the Broadmoor United Methodist Church.

Advocate staff photo by CHARLES CHAMPAGNE — Zainab Ahmad speaks about daily prayer in the Muslim faith Sunday, Jan. 31, 2016 during A Dialogue with Muslims sponsored by the Interfaith Federation and held at the Broadmoor United Methodist Church.

A handful of Baton Rouge Muslims took the stage in a Methodist church hall Sunday afternoon to explain their faith, answer questions and dispel a host of misconceptions about Islam.

The meeting, organized by the Interfaith Federation of Greater Baton Rouge and attended by about 200 people, gave leaders from the Baton Rouge Muslim community an opportunity to address negative perceptions of their faith — and a chance for curious non-Muslims to ask a range of frank questions.

“Our main goal was to dismiss some of the myths about Islam,” said Emad Nofal, chairman of the Islamic Center of Baton Rouge, who spoke during the program Sunday at Broadmoor United Methodist Church. “The misconceptions are out there. People don’t always go to good sources for their information. Events like this will help clear those up.”

In small group discussions, roughly 25 Baton Rouge Muslims spoke about everything from dietary restrictions to prayer habits. The frequent headlines linking the religion with terrorist groups like the Islamic State group drew plenty of questions as well.

Terrorist actions cut against the basic tenants of the faith, Nofal said, and are carried out by only a very tiny fraction of the more than 1.5 billion Muslims worldwide.

In the United States, Muslims have actively and consistently condemned and distanced themselves from terrorist groups, Nofal said.

“They do acts that are not acceptable to our dignity and our humanity,” Nofal said. “Muslims have been unjustly asked to always, always answer for the bad acts of a very few. We have done more than enough to isolate ourselves and distance ourselves from the bad guys and isolate them from us. Why should I apologize for their actions?”

“There’s just so much fear and suspicion. You have to feel for our Muslim brothers and sisters right now, who are about 6,000 strong here in Baton Rouge,” Wideman said. “They need us right now — and we need them.”

Tom Lusk, a recently retired history teacher, said he’d come to the event Sunday to get “a better understanding of the Muslim world view.”

Though he taught Middle Eastern history to students in East Feliciana Parish, Lusk said he’d only really gotten to know one Muslim locally prior to Sunday’s event.

Lusk brought along a recent Time magazine article on Wahhabism, an ultraconservative Islamic movement centered in Saudi Arabia, and asked Zee Mohamed, an accountant and practicing Muslim, to explain how the fundamentalist movement differed from his own faith.

“I was able to put that in perspective,” Mohamed said afterward. “I like the tough questions, and I like people to ask them. I was happy to be able to dispel some of the misconceptions about Islam.”

Mohamed’s 26-year-old daughter, Rehana Mohamed, received plenty of controversial questions from people at her table, mostly about terrorism, but she said she welcomed the opportunity to address stereotypes and misconceptions.

“It’s always better to ask a Muslim than to just ask Google,” she said.

She called the association of her religion with terrorism unfair, especially since media coverage of mass shootings or terrorist attacks carried out by Christians rarely focus on their faith.

“The double standard is messed up,” Rehana Mohamed said.

Lee Allen, a Methodist minister, said he was struck by the diversity of Baton Rouge’s Muslim community and “the varieties of ways Muslims live out their faith but remain very tolerant of each other.”

Nofal also highlighted the notable success of many Muslim immigrants in the United States and their outsized representation in professions like engineering, medicine and business.

“These people came here to help and contribute, not just to make better lives for themselves,” Nofal said. “And they’re thankful for their freedoms.”

Members of the Islamic Center of Baton Rouge come from a wide variety of backgrounds, Nofal said, including immigrants from around the world, fourth-generation Americans and recent converts to the faith.

They also practice their religion in a wide variety of ways.

“Some come five times a day, some come once a week and some visit the mosque only when they’re married and when they die,” Nofal said.

Ali Abidi, a state worker at the Louisiana Department of Fisheries and Wildlife who spoke about the importance of the pilgrimage to Mecca, said his religion stresses the importance of being a good neighbor to those of all faiths — a point stressed repeatedly during Sunday’s event.

“The idea that religion is divisive is a false narrative,” Abidi said. “It’s up to us to dump that narrative.”