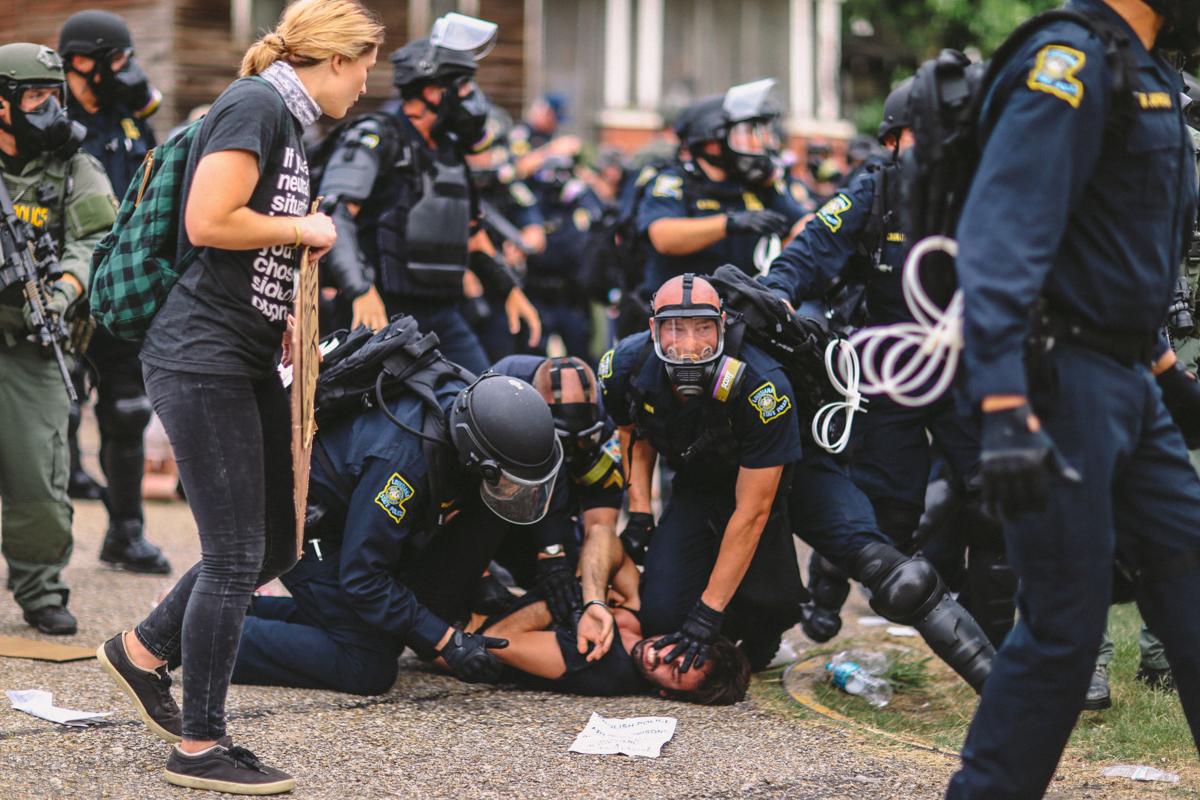 Officers arrest protester Max Geller at a demonstration in the Beauregard Town section of Baton Rouge on July 10, 2016. Around 184 people were arrested at protests after the killing of Alton Sterling on July 5, 2016, by a Baton Rouge Police officer. 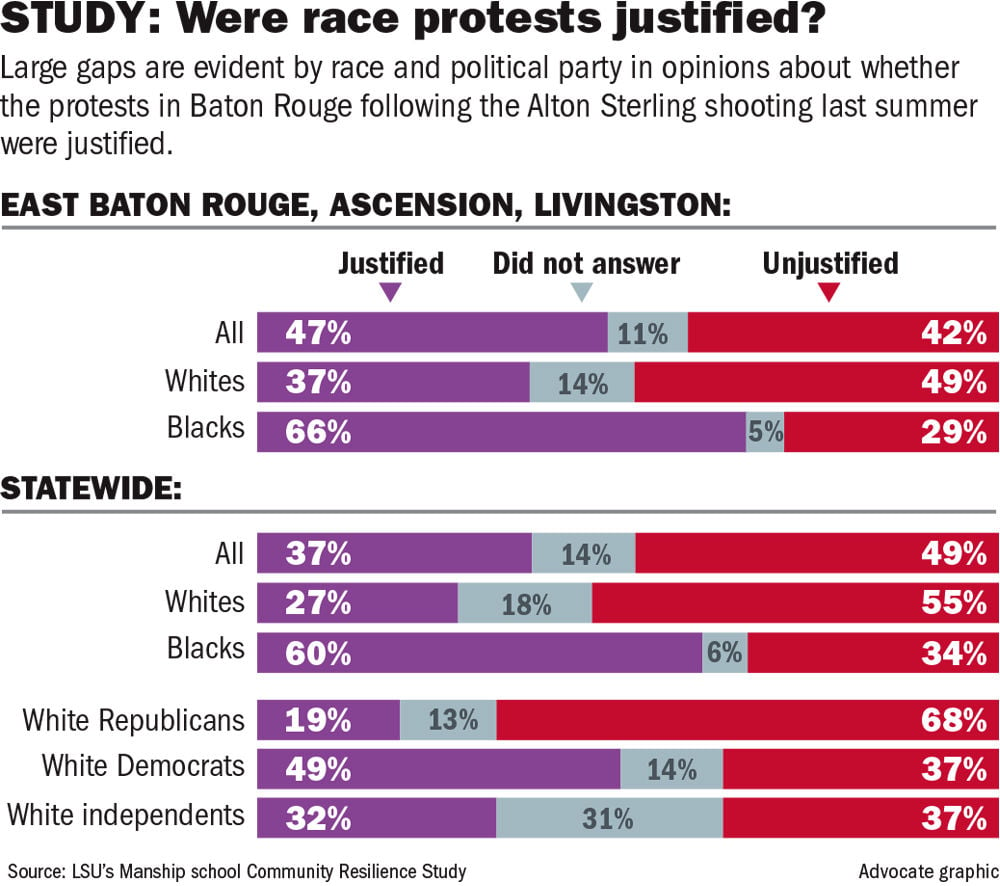 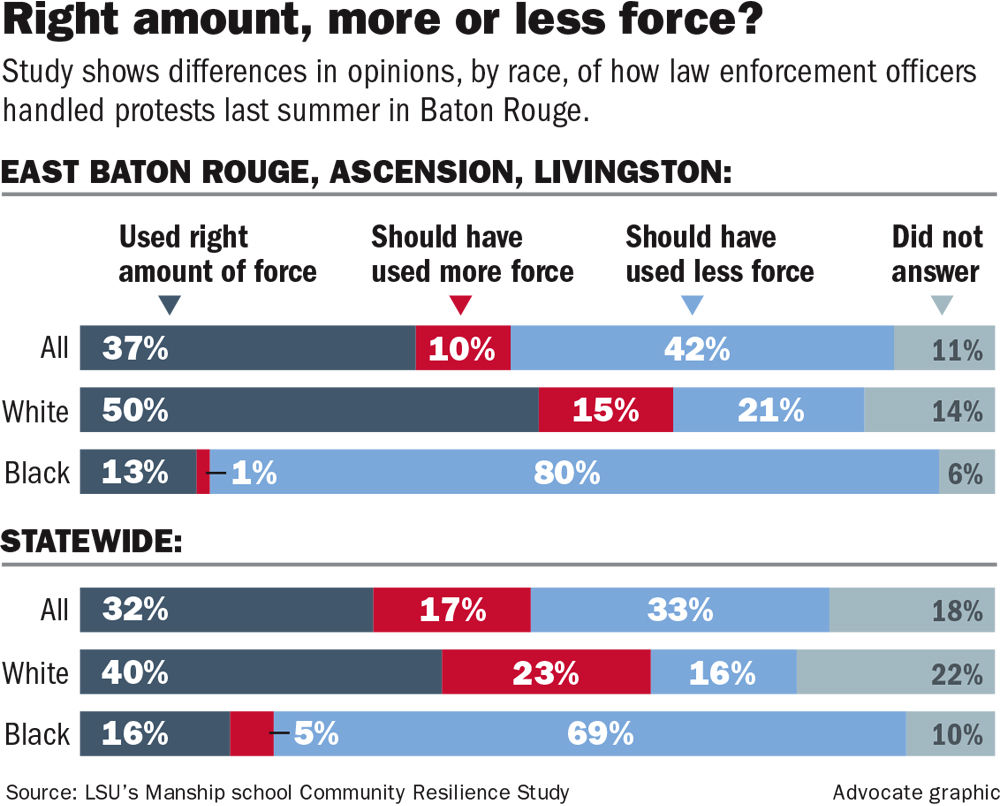 Officers arrest protester Max Geller at a demonstration in the Beauregard Town section of Baton Rouge on July 10, 2016. Around 184 people were arrested at protests after the killing of Alton Sterling on July 5, 2016, by a Baton Rouge Police officer.

An LSU study released Wednesday found Louisiana residents remain divided, primarily along racial lines, when it comes to their perceptions and opinions on policing, racial equality and the legitimacy of last summer's protests in Baton Rouge, according to the first part of a "Community Resiliency Study" by the LSU Manship School of Mass Communication.

"Opinions and perceptions of race issues in Louisiana are starkly divided along racial lines," the report finds. "White and black residents of Louisiana have very different views about whether law enforcement treats races equally and avoids excessive force."

LSU’s faculty commissioned the study as they reflected on the summer's tumultuous events — beginning with the police shooting of Alton Sterling July 5 and the protests that followed, the attack on law enforcement that left two Baton Rouge police officers and one East Baton Rouge sheriff's deputy dead July 17 and finally the 100-year flood in August — hoping to find ways to engage the public on these topics, said Mike Henderson, the director of LSU's public policy research lab, which conducted the survey designed by the Manship School.

"Given this turmoil, we wanted to see if we could use the research tools we have to get a pulse of where our state and local community is on these issues," Henderson said.

The study surveyed more than 1,000 adults throughout the state in early 2017, and especially focused on a subgroup of respondents in the greater Baton Rouge metro area, which was most affected by the summer's events.

A second study will be released in the coming weeks focused on issues created by the flood, Henderson said.

"The biggest takeaway, whether you're looking locally or statewide, is there are still some persistent gaps in how blacks and whites see racial inequalities and see racial issues," Henderson said.

He said the survey is "a useful guide to understanding where we're at in the face of these issues."

The study detailed stark differences in perceptions by black and white residents in the Bayou state on how they thought police handled the summer's protests. Almost 70 percent of blacks statewide believed police should have used less force, while 16 percent of whites said the same. Forty percent of white Louisianan's thought police used the right amount of force.

However, both black and white residents in the Baton Rouge metro area, which included East Baton Rouge, Livingston and Ascension parishes, were more likely to say police should have used less force during the protests compared to residents from across the state.

"Residents of the Baton Rouge metro area are more critical of the amount of force used by police during last year's protests in the city than the state as a whole," the report says.

The study also found that statewide, the majority of whites believed the protests were not justified, while blacks believed they were. But Baton Rouge metro residents were more accepting of the protests, with almost half of them saying they were justified compared to 37 percent of residents across the state.

Baton Rouge Police Chief Carl Dabadie said the numbers in the study, especially during the summer protests, were not shocking and they affirmed the goals of his department.

"A lot of it was pretty much what we already knew," Dabadie said Thursday. "Bridging that gap between police and community relations … We've been working on it for years."

Dabadie also acknowledged the criticism for how his department handled the protests over summer, including the decision to use military style tactics, but he said, "It's very rare that we use force."

He said only two people, one of whom was an officer, were injured in the protests.

Looking at day to day law enforcement operations, white residents in the state were more than twice as likely as black residents to have at least a fair amount of confidence that local police treat people — no matter their race — the same, the report says. The numbers were similar in a question about the use of excessive force, with whites statewide having significantly more confidence than black residents that police don’t use excessive force.

"This community has some issues," said East Baton Rouge Sheriff Sid Gautreaux. "They're definitely legitimate issues that need to be addressed and that's what I hope and pray happens."

Gautreaux said he thinks his deputies have a pretty good relationship with black residents, but he knows race relations are a nationwide issue for all law enforcement.

"Shame on us if we don't fix this because we've got an opportunity to," Gautreaux said. "I want to see things get improved for this parish."

However, researchers found a growing number of people in Louisiana believe racial relations have worsened.

In 2014, 20 percent of residents statewide said race relations were getting worse; however this survey found that number has increased to one-third of residents. These numbers are similar to national numbers, researchers wrote. In both cases, there is a significant gap between blacks' and whites' ideas on the issue, and that gap is largest in the Baton Rouge metro area, researchers found.

"The report is insightful and confirming," said Mayor-President Sharon Weston-Broome.

She said she plans to use the survey along with her transition team's initiatives to improve race relations, including by working on redevelopment and police civil service laws along with stopping the St. George incorporation movement.

Across the board, the study found Louisianans want the government to put more of an effort into reducing racial differences, especially in the criminal justice system and income inequality. That sentiment was more strongly held among black residents across the state, with more than 85 percent of blacks responding that more needs to be done to reduce racial disparities, while about half of whites said the same.

Baton Rouge Mayor Sharon Weston Broome seems to be bullying ahead with no thought of consequences where the city police are concerned. The pol…

A U.S. Congressman blasted the U.S. Department of Justice over their "failure to communicate with the community" about its long-awaited decisi…