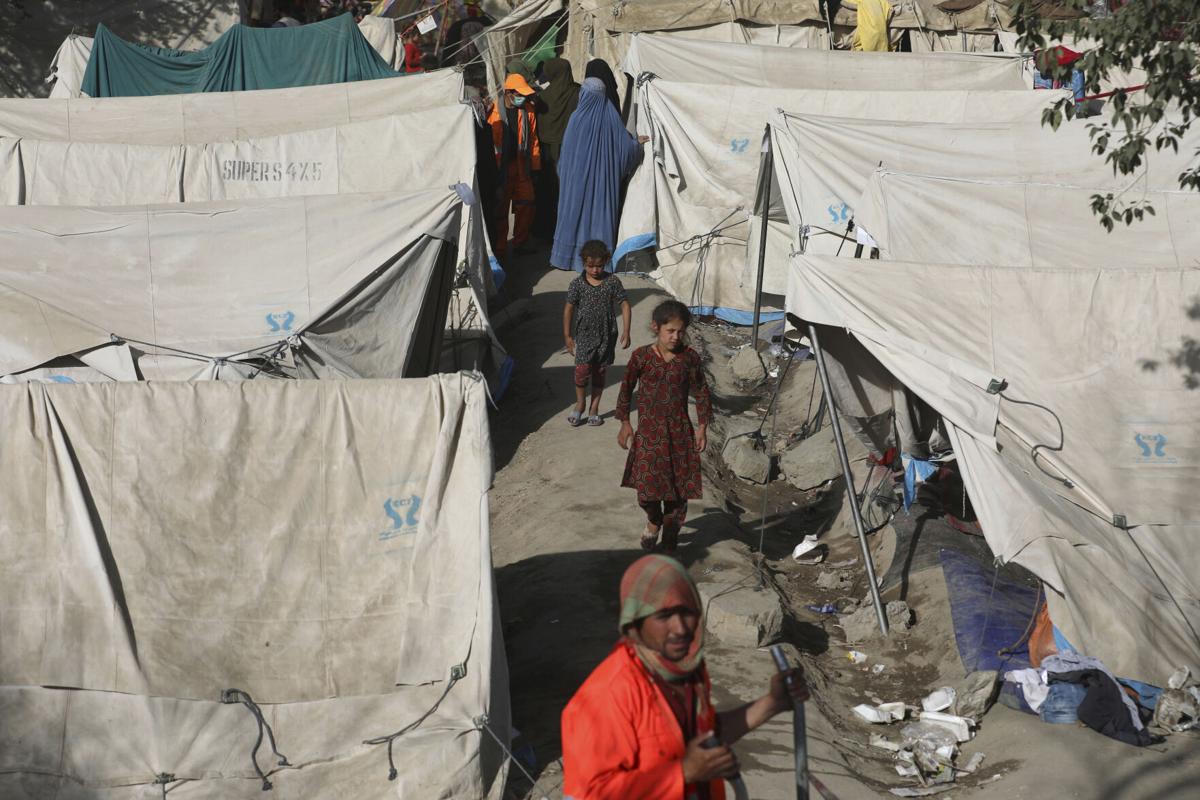 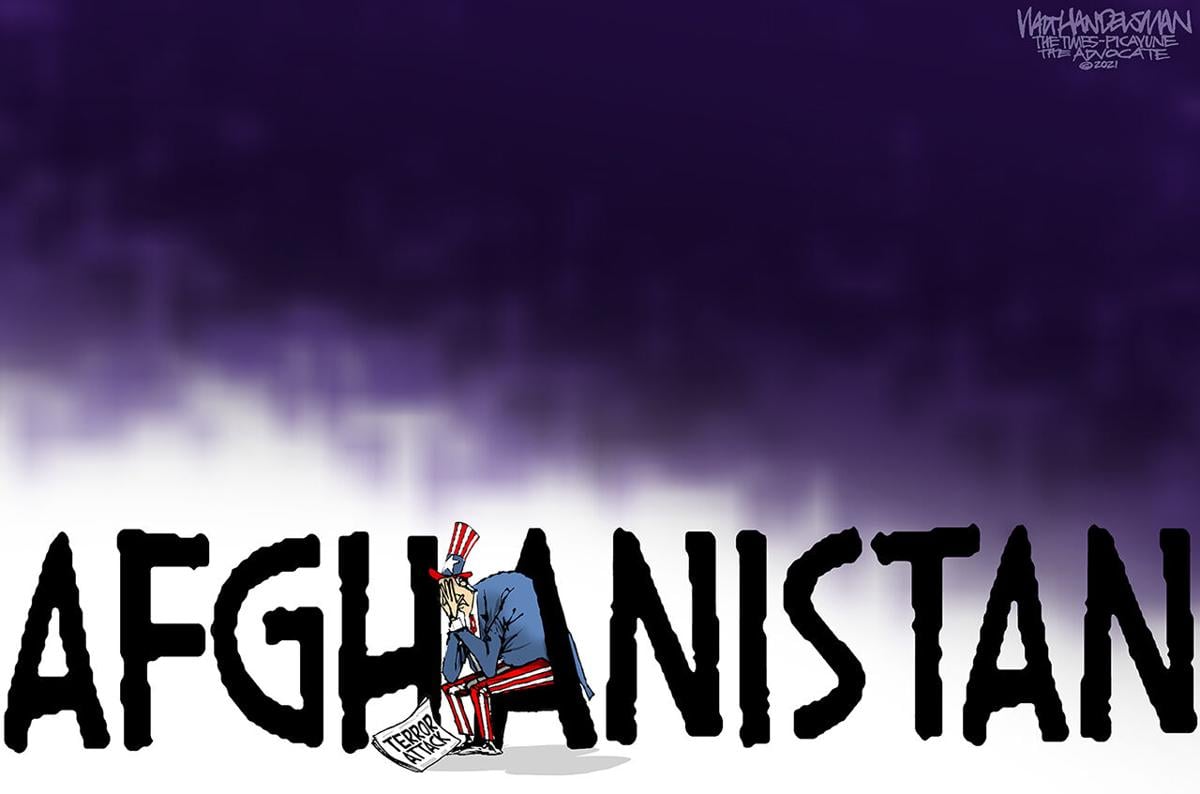 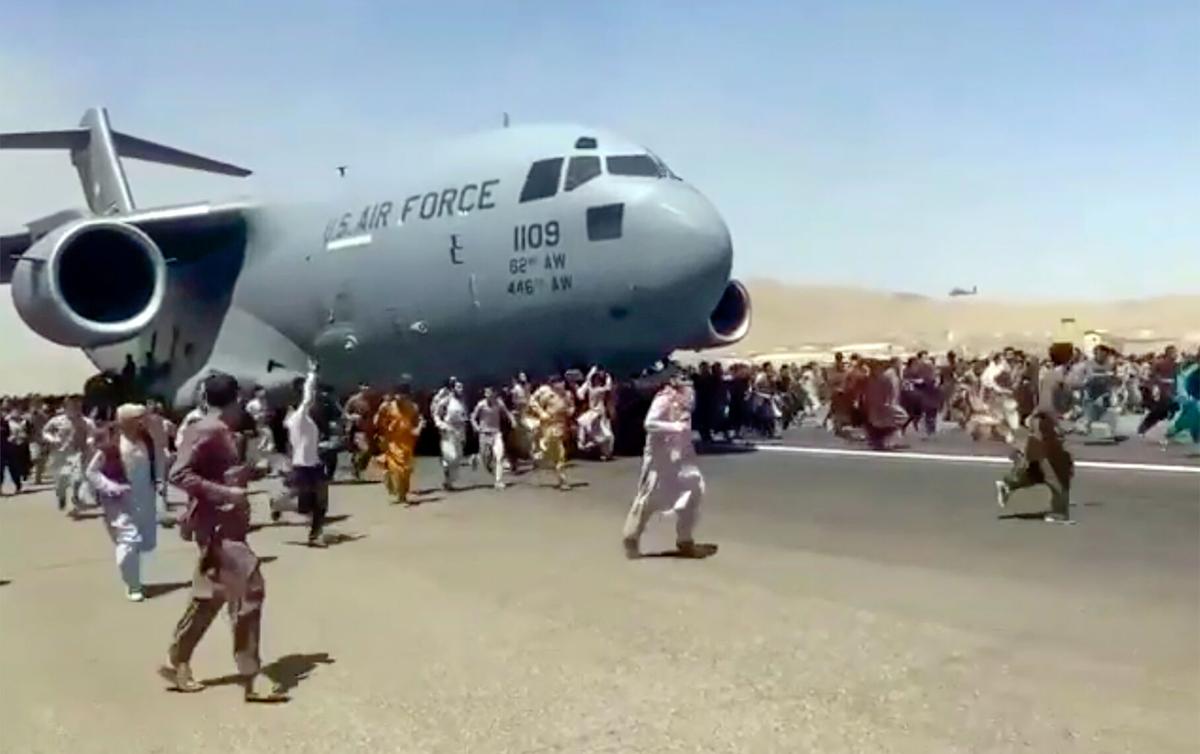 Hundreds of people run alongside a U.S. Air Force C-17 transport plane as it moves down a runway of the international airport, in Kabul, Afghanistan, Monday, Aug.16. 2021. Thousands of Afghans have rushed onto the tarmac at the airport, some so desperate to escape the Taliban capture of their country that they held onto the American military jet as it took off and plunged to death. (Verified UGC via AP) ORG XMIT: AFG102 ORG XMIT: BAT2108161145581048

Hundreds of people run alongside a U.S. Air Force C-17 transport plane as it moves down a runway of the international airport, in Kabul, Afghanistan, Monday, Aug.16. 2021. Thousands of Afghans have rushed onto the tarmac at the airport, some so desperate to escape the Taliban capture of their country that they held onto the American military jet as it took off and plunged to death. (Verified UGC via AP) ORG XMIT: AFG102 ORG XMIT: BAT2108161145581048

The Biden administration began notifying governors and state refugee coordinators across the country about how many Afghan evacuees from among the first group of nearly 37,000 arrivals are slated to be resettled in their states.

California is projected to take more arrivals than any other — more than 5,200 people, according to State Department data for the Afghan Placement and Assistance program obtained by The Associated Press.

Alabama and Mississippi are each slated to welcome 10, U.S. officials said Wednesday. Hawaii, South Dakota, West Virginia, Wyoming and the District of Columbia are not expected to resettle anyone from the first group of evacuees who fled during the final days of the chaotic U.S. withdrawal last month.

The administration has requested funding from Congress to help resettle 65,000 Afghans in the United States by the end of this month and 95,000 by September 2022. President Joe Biden tapped the former governor of his home state of Delaware, Jack Markell, to temporarily serve as his point person on resettling Afghan evacuees in the United States.

States with a historically large number of Afghans who resettled in the U.S. over the last 20 years — including California, Maryland, Texas and Virginia — are again welcoming a disproportionate number of evacuees, according to the data. Many gravitate to northern Virginia, the Maryland suburbs of D.C. and northern California — some of the most expensive housing markets in the country.

Oklahoma, which over the course of the 20-year war had resettled a relatively small number of Afghans, is slated to resettle 1,800 new arrivals.

Many of the new evacuees requested to be resettled in those states because they already have family and close friends living in those states, according to two U.S. officials who spoke on the condition of anonymity to discuss the calls to state government officials. Resettlement agencies also have a large presence and capacity in many of those states.

The State Department resettled evacuees based on the advice of local affiliates of nine national resettlement agencies the U.S. government is working with, the officials said.

The officials said Afghan evacuees are advised that other parts of the country -- including areas with plentiful job openings and cheaper housing -- could be good places to begin their new lives in the U.S.

The Afghan evacuees go through a Department of Homeland Security-coordinated process of security vetting before being admitted. And every evacuee who comes into the United States also goes through health screening. Evacuees who are 12 and older are required to get the COVID-19 vaccination as a term of their humanitarian parolee status after entering the country.

U.S. veterans weigh in as Afghanistan situation turns upside down with Taliban in control

When the Afghanistan government collapsed after the Taliban took control of the country's capital, Kabul, the scramble by the U.S. to get its …

Still, there have been unexpected complications.

U.S.-bound flights for evacuees who had been staying temporarily in third-country processing sites were halted last week after measles cases were discovered among several Afghans who had recently arrived in the U.S.

Some of the recent Afghan arrivals could also face a tough road ahead if Congress doesn't take action to treat them as refugees arriving in the U.S.

The Afghan evacuees are not currently eligible for food stamps, cash assistance through the Temporary Assistance for Needy Families program for low income families, Medicaid or other traditional refugee services that are funded through the Department of Health and Human Services.

Currently, each Afghan evacuee is slated to receive $1,225 to help with rent, furniture and food and provide a small amount of pocket money. Biden has called on Congress to take action to ensure that the recent arrivals have access to the same benefits as refugees.

'We will hunt you down and make you pay': US to continue evacuations, avenge deaths, Biden says