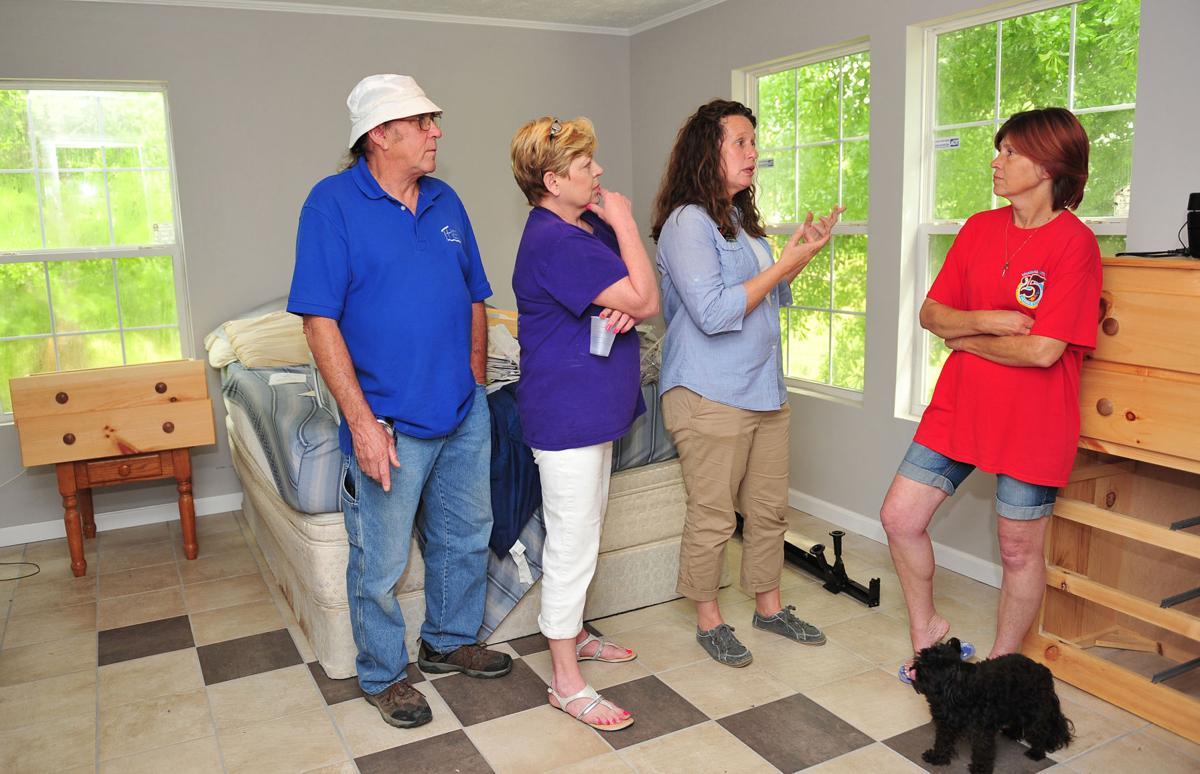 Donna Bliss, a disaster case manager with the Louisiana United Methodist Conference, second from right, talks to to Leslie Garon, right, whose family she helped get back into their modular home in Tangipahoa Parish. Daryl Ready, left, and Beth Lafargue, second from left, look on. Ready and Lafargue lead a long-term recovery group in Tangipahoa Parish that helped coordinate the funds and volunteers to repair Garon’s flooded home. 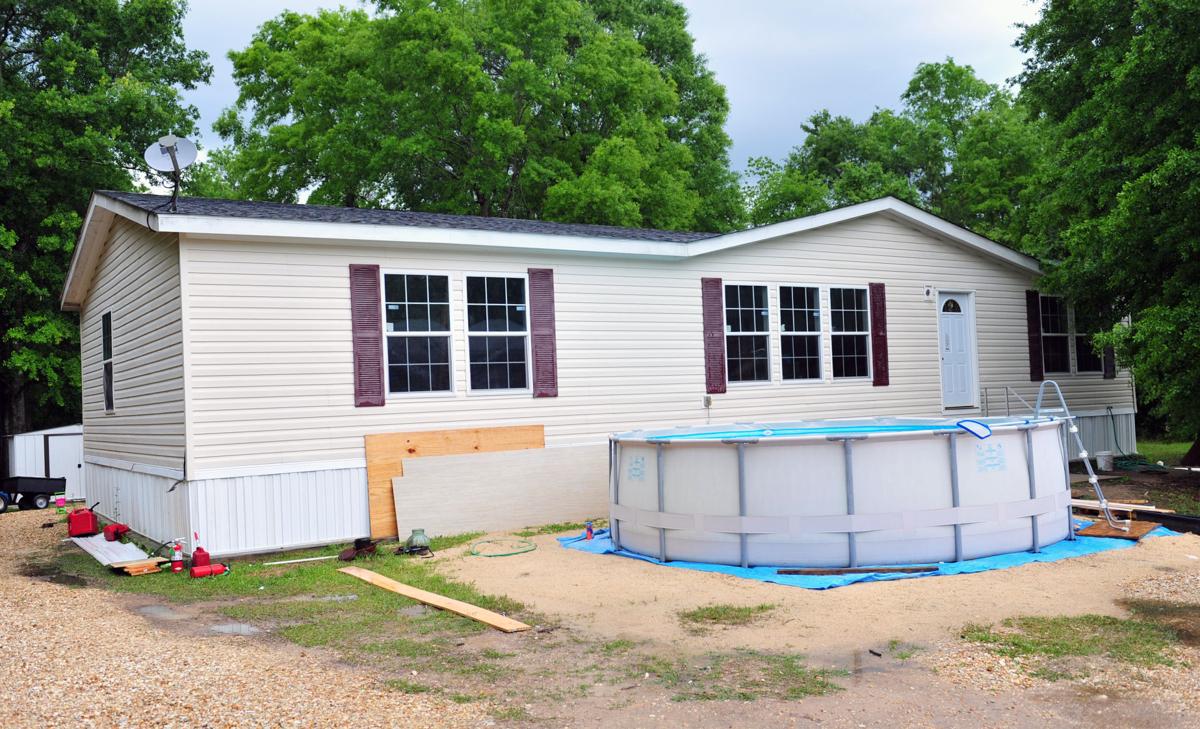 The Tangilena Long-Term Recovery Group coordinated volunteers and funds to repair this home in Tangipahoa Parish that was flooded in August 2016. 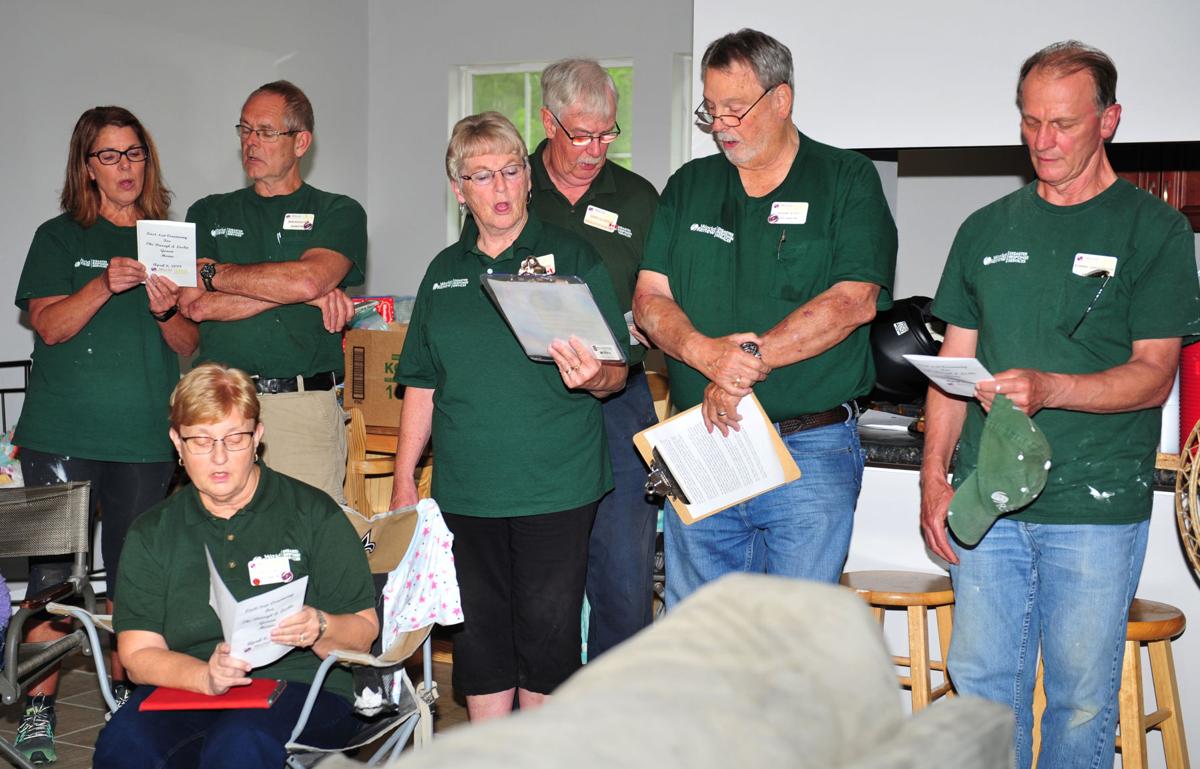 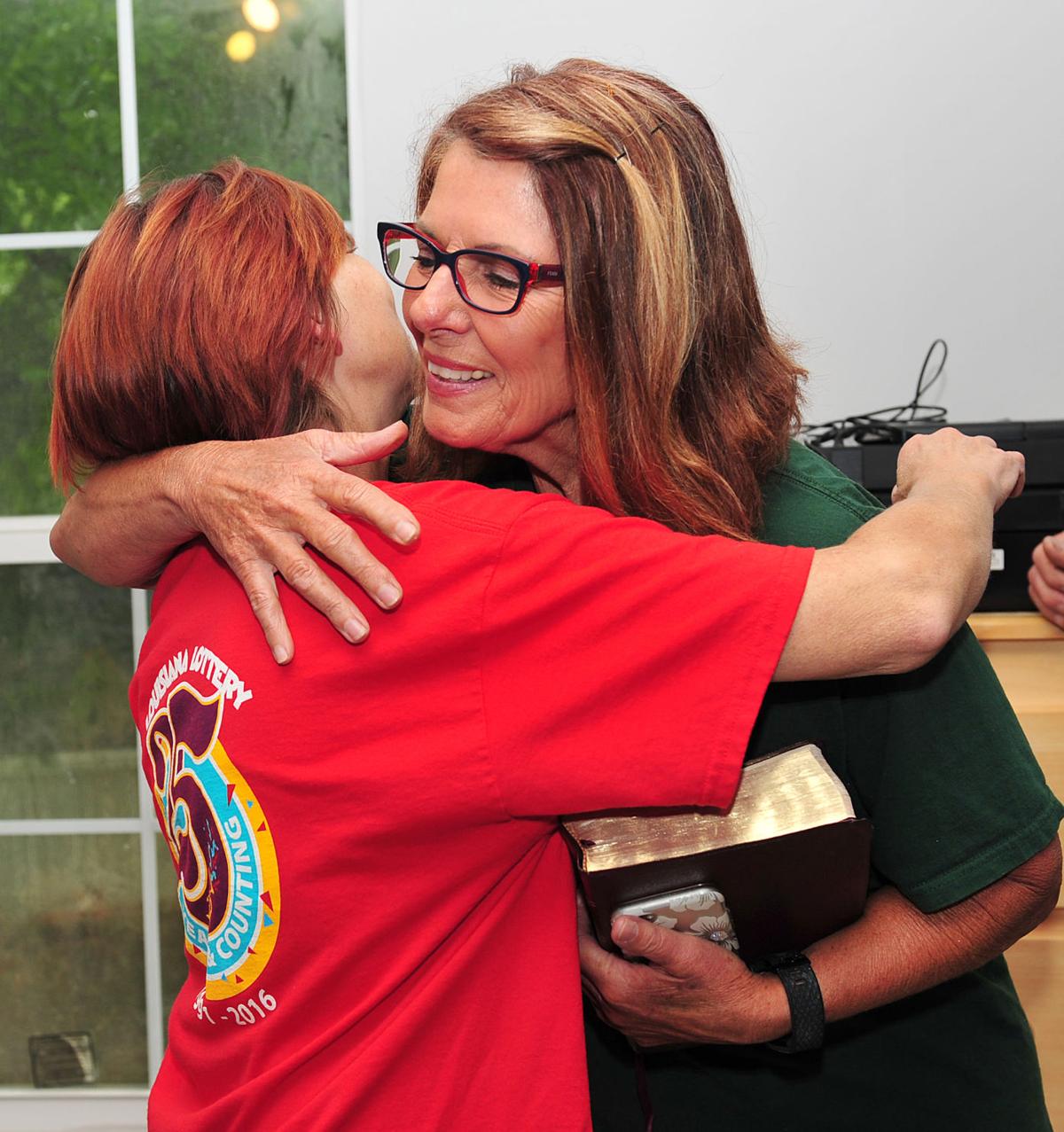 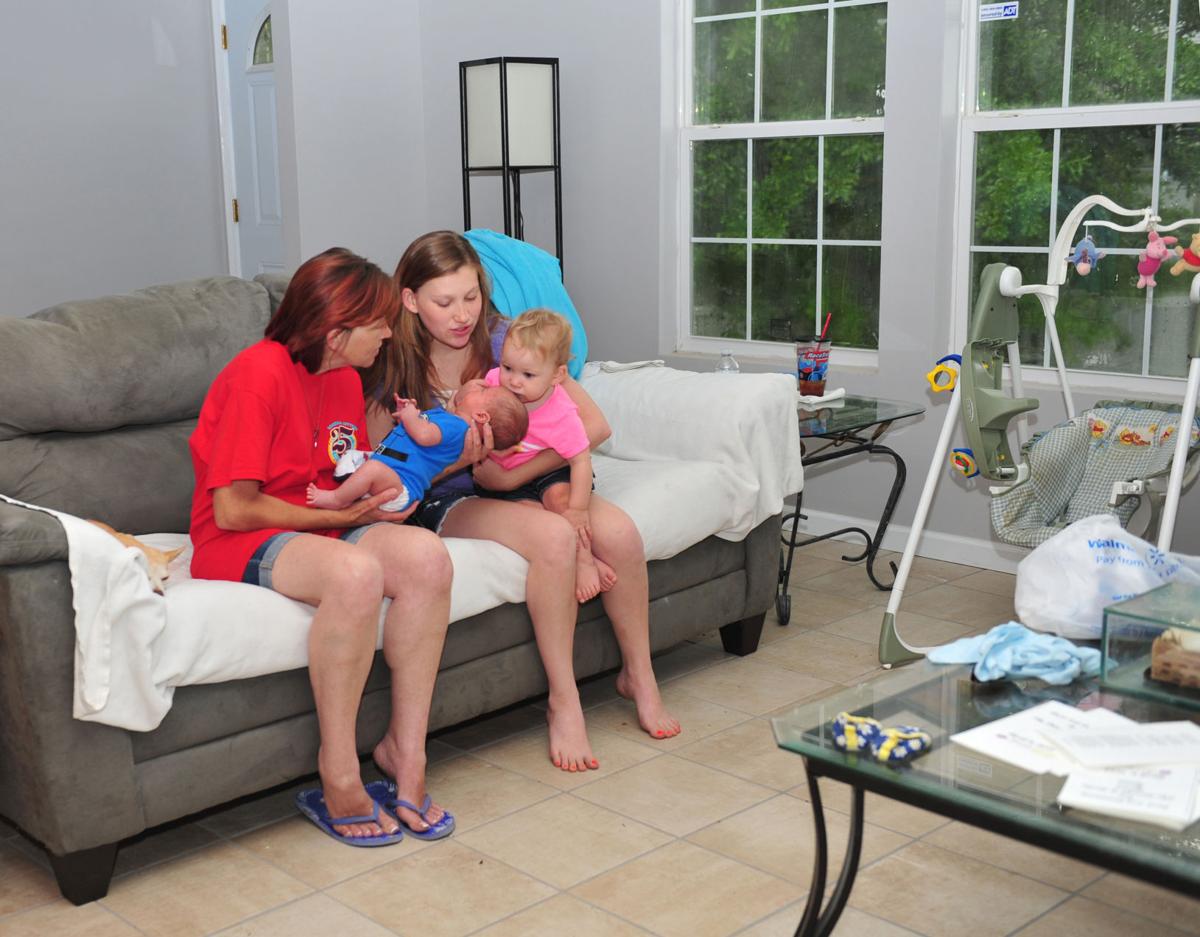 Leslie Garon, 47, sits on the couch with her daughter, Courtney Garon, and her grandchildren, April and Jonathan Mixon, in their newly renovated home. Volunteers from The Garon's received help from the Tangilena Long-Term Recovery Group to renovate their flooded home.

Donna Bliss, a disaster case manager with the Louisiana United Methodist Conference, second from right, talks to to Leslie Garon, right, whose family she helped get back into their modular home in Tangipahoa Parish. Daryl Ready, left, and Beth Lafargue, second from left, look on. Ready and Lafargue lead a long-term recovery group in Tangipahoa Parish that helped coordinate the funds and volunteers to repair Garon’s flooded home.

The Tangilena Long-Term Recovery Group coordinated volunteers and funds to repair this home in Tangipahoa Parish that was flooded in August 2016.

Leslie Garon, 47, sits on the couch with her daughter, Courtney Garon, and her grandchildren, April and Jonathan Mixon, in their newly renovated home. Volunteers from The Garon's received help from the Tangilena Long-Term Recovery Group to renovate their flooded home.

HAMMOND — Leslie Garon pressed her right hand to her chest and choked back tears as she addressed more than a dozen green-shirted volunteers in her living room earlier this month.

"From the bottom of my heart, I appreciate every one of y'all," she said. "You gave me a beautiful house that I didn't think I would ever have."

The source of Garon's salvation was the Tangilena Long-Term Recovery Group, which is helping people in Tangipahoa and St. Helena parishes left behind from the government programs for victims of the 2016 floods.

Coalitions of nonprofit groups, faith organizations and state-funded case managers have sprung up in parishes stretching from St. Tammany to Lafayette to help people with particularly challenging situations get back into their homes.

In East Baton Rouge, Livingston, Tangipahoa and St. Helena alone, long-term recovery groups have assisted about 300 families with projects ranging from full repairs to their flooded homes to installation of a new septic tank.

Katie Pritchett, vice president of community impact for the Capital Area United Way and chairwoman of the East Baton Rouge Parish long-term recovery group, said the group takes on "last resort" cases where there are no other resources available to help people struggling to get back into their homes.

They focus on families that for various reasons are ineligible for the state-run Restore Louisiana program or have remaining unmet needs after getting assistance from that program or others.

Recovery funds slow to arrive, flood victims say; see how much has been distributed, and to whom

Just a few months ago, Garon was living in a Federal Emergency Management Agency trailer with her husband, daughter and grandchild.

Her husband works nights and tried during the day to fix up the home. They had managed to do some 70 percent of the repairs, but they were having to manage it on his limited time and paychecks, said Donna Bliss, a case manager from the Louisiana United Methodist Conference.

Bliss said she received a referral from FEMA about the Garon family and showed up on their doorstep to see what she could do. People can be referred to disaster case managers through FEMA, long-term recovery groups and state agencies.

After some persistence, Bliss convinced the family to take help from the Methodist Conference. The conference agreed to pay for the supplies needed to finish the modular home. The long-term recovery group has an ongoing relationship with a Christian volunteer group called World Renew, and it was able to provide steady stream of volunteers for 12 weeks.

Long-term recovery is a concept used around the country and has been used in Louisiana since at least Hurricane Katrina. Disaster case managers, most of whom are funded through the state, identify needy cases and present them at roundtable “unmet needs” meetings of the groups.

One such meeting takes place at 8:30 a.m. every Friday in Hammond, where more than a dozen people sit down at folding tables in a quasi-storage room off the main chapel at the First United Methodist Church.

Beth Lafargue, who leads the group, and her two construction managers review the status of cases they already have. What has funding, what is left to do. Then, disaster case managers from Catholic Charities of the Diocese of Baton Rouge hand out packets and describe the clients detailed inside, including what repairs remain and why other sources of help, such as FEMA or Restore Louisiana, were not coming through.

Funders seated at the table ask case managers for any missing details needed to move forward. They typically fund projects that cost less than $10,000, using volunteer labor and donated materials as much as possible.

United Way organizations of the Capital Area and Southeast Louisiana also have been big funders, re-granting about $2 million from the Red Cross and raising their own funds for the effort. The Livingston group also has benefited from funding from the Immaculate Conception Catholic Church.

In addition, national and local volunteer groups have provided money and thousands of hours of labor to work on the homes. FEMA has been involved also in setting up the group and assisting with information in some cases.

Disaster case managers from Catholic Charities of the Diocese of Baton Rouge have the state contract for services in the capital area. According to David Aguillard, executive director, case managers develop a detailed file with income information and repair estimates, as well as the mitigating circumstances “that may have made their damage worse than expected or if they might have an extreme shortage of resources.” The agency has presented approximately 400 cases to long-term recovery groups with about 60 percent of those being funded, he said.

Bliss, the case manager with the Louisiana United Methodist Conference, describes it this way: “It is up to me as a case manager to build the entire case and then advocate for them as a family. … And once I bring it to the table and I tell their story and I show where their income is and what they did and what happened to their money, the decision is made at a higher level. We like to say that the Lord leads us to the people that he wants to bless.”

In the case of the Garon family, Bliss said, the mortgage company told the family their house was a total loss and insisted on taking the family's flood insurance check to pay off the loan. Restore Louisiana can help people with forced payoffs, but Bliss said state officials likely would have viewed the Garon's case as duplication of benefits.

Lafargue said there are a number of reasons people find themselves before long-term recovery groups.

Some people are ineligible for government assistance because they took help after an earlier disaster and did not maintain their flood insurance.

"Sometimes, with the level of poverty, there is just no way the person can afford it," Lafargue said.

Others suffered in the flood but not to the level that is funded by Restore Louisiana, she said. That federally funded program provides assistance only for people who had more than $8,000 worth of FEMA-verified damage or a foot of water.

At the meeting of the Tangilena group in Hammond earlier this month, a disaster case manager presented the story of a single-income family living in a home that suffered a roof leak during the August 2016 flood. It also had damaged siding and floors but did not meet the damage threshold for Restore.

In other cases, people were the victims of contractor fraud but paid in cash or without receipts, which makes it difficult to justify to the Restore program, Pritchett said.

Or having received the mobile home replacement from the Restore program, people still need help adding a septic system or moving an electric pole.

Recovery funds slow to arrive, flood victims say; see how much has been distributed, and to whom

Much of the work of long-term recovery groups is coming to an end — despite considerable remaining need, leaders of the groups said.

By one measure: There are 1,007 households around the state still living in their manufactured housing units, according to FEMA. There are 532 units remaining in East Baton Rouge and 298 in Livingston. The deadline to move out is May 15.

The reason for the wind-down in Livingston and East Baton Rouge parishes has to do with funding and case managers, group leaders said.

Meanwhile, Catholic Charities will be wrapping up its contract with the state in August, a source of concern for the long-term recovery groups that rely on the organization to identify and manage the cases.

“As Catholic Charities closes out, we’ll see the needs none of us know how to address,” Atkinson said.

The state contract with FEMA for disaster case management funding ends in August, but the state plans to request a time extension, said Pat Forbes, director of the Office of Community Development, which oversees the grant. Although Catholic Charities Diocese of Baton Rouge plans to leave the program in August and has already been drawing down case managers, the state is working with other nonprofits to provide similar services, Forbes said.

Laraine Waughtal, director of the Office of Mission Engagement and Outreach for the Louisiana United Methodist Conference, said she is planning to rely more on her own 10 case managers to handle people, including those who learn they are ineligible for help from the Restore Louisiana program.

The Tangilena group expects it can continue longer. The Methodist conference has committed to funding through August 2019 and the United Way of Southeast Louisiana  has committed to funding through the end of the year. The group also has a commitment from World Renew to keep supplying volunteer labor and relationships with other home building nonprofits.

"We will never have enough to do (something) for everybody," said Jamene Dahmer, senior vice president for long-term recovery at the United Way of Southeast Louisiana. "However, we will continue to do everything we can until we have extended every resource we have."