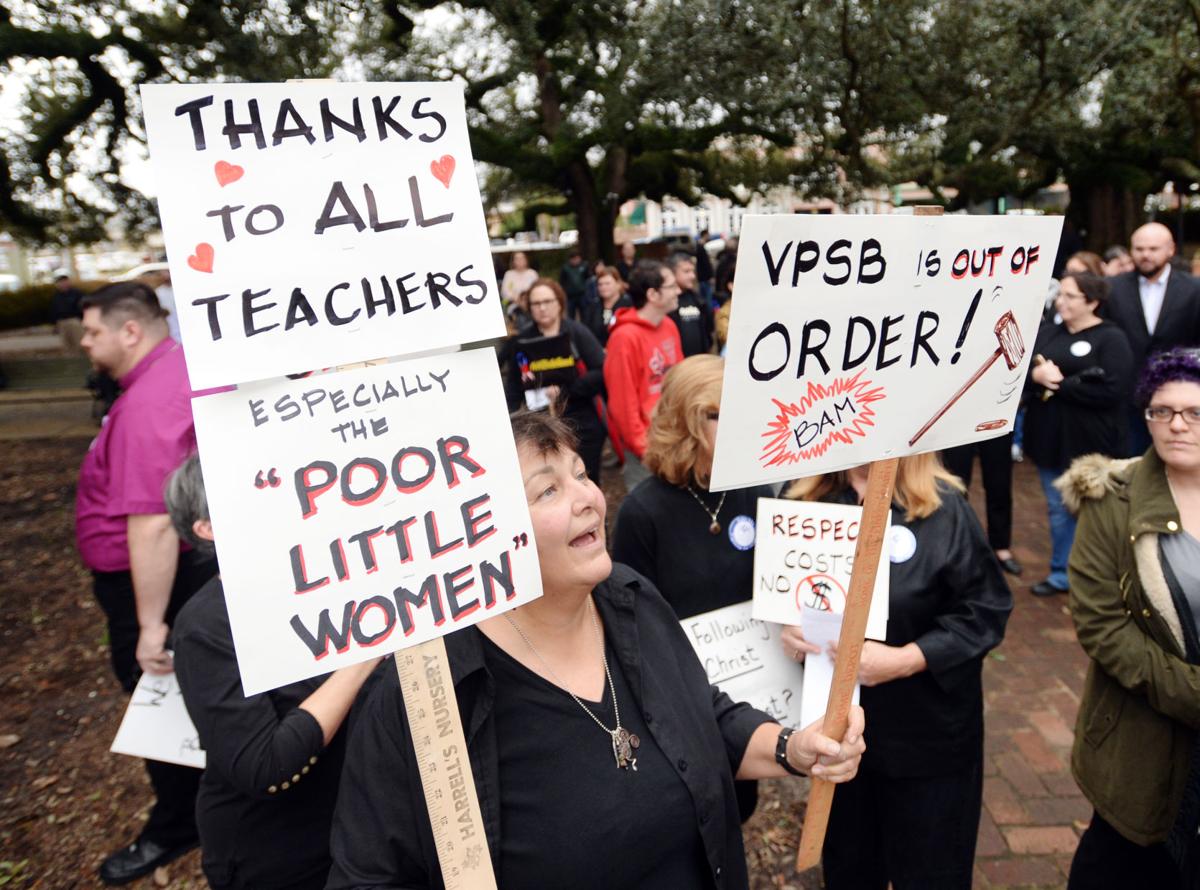 Anne Hollier holds signs during a rally in support of Deyshia Hargrave, a Vermilion Parish teacher who was arrested during a recent school board meeting after questioning a superintendent pay increase, Thursday, January 11, 2018, at Magdalen Square in Abbeville, La. 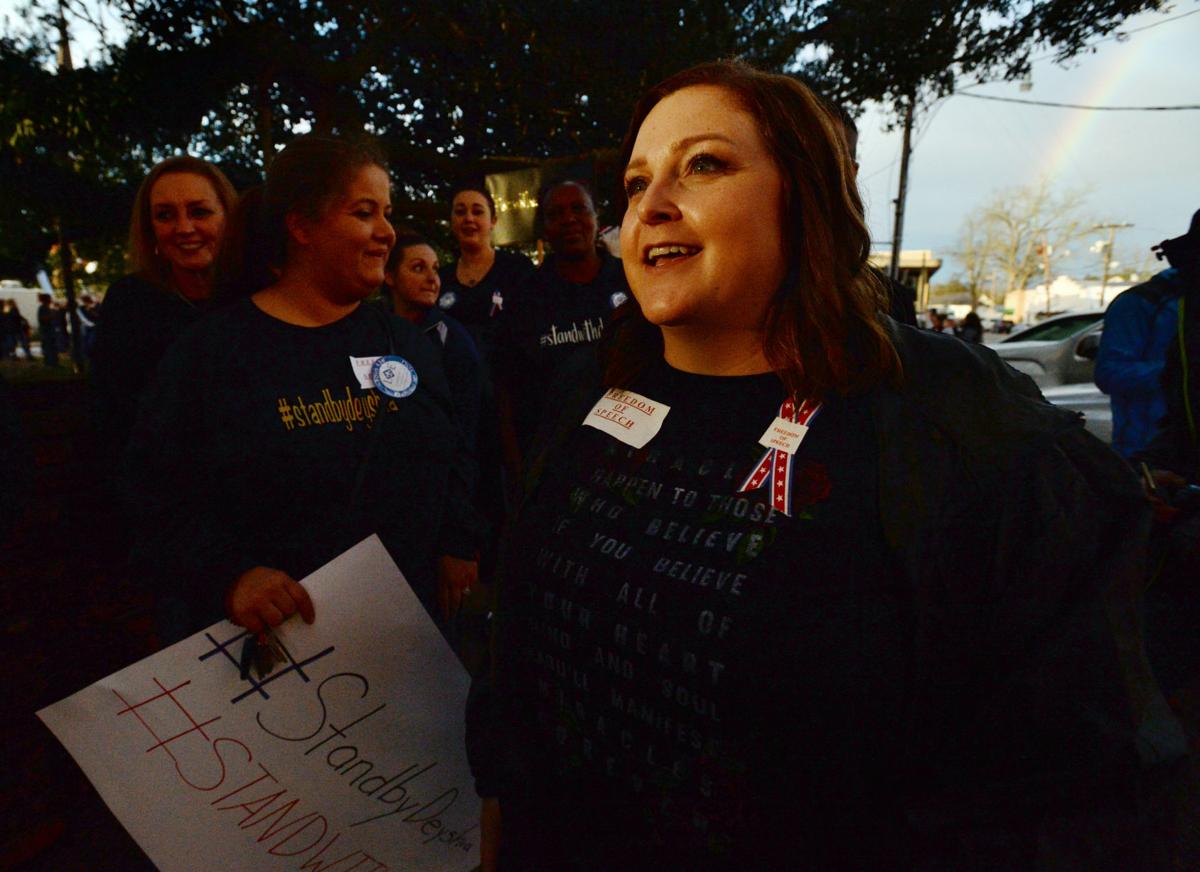 A rainbow appears in the sky as Deyshia Hargrave, a Vermilion Parish teacher who arrested during a recent school board meeting after questioning a superintendent pay increase, leaves a rally held in support of her Thursday, January 11, 2018, at Magdalen Square in Abbeville, La. 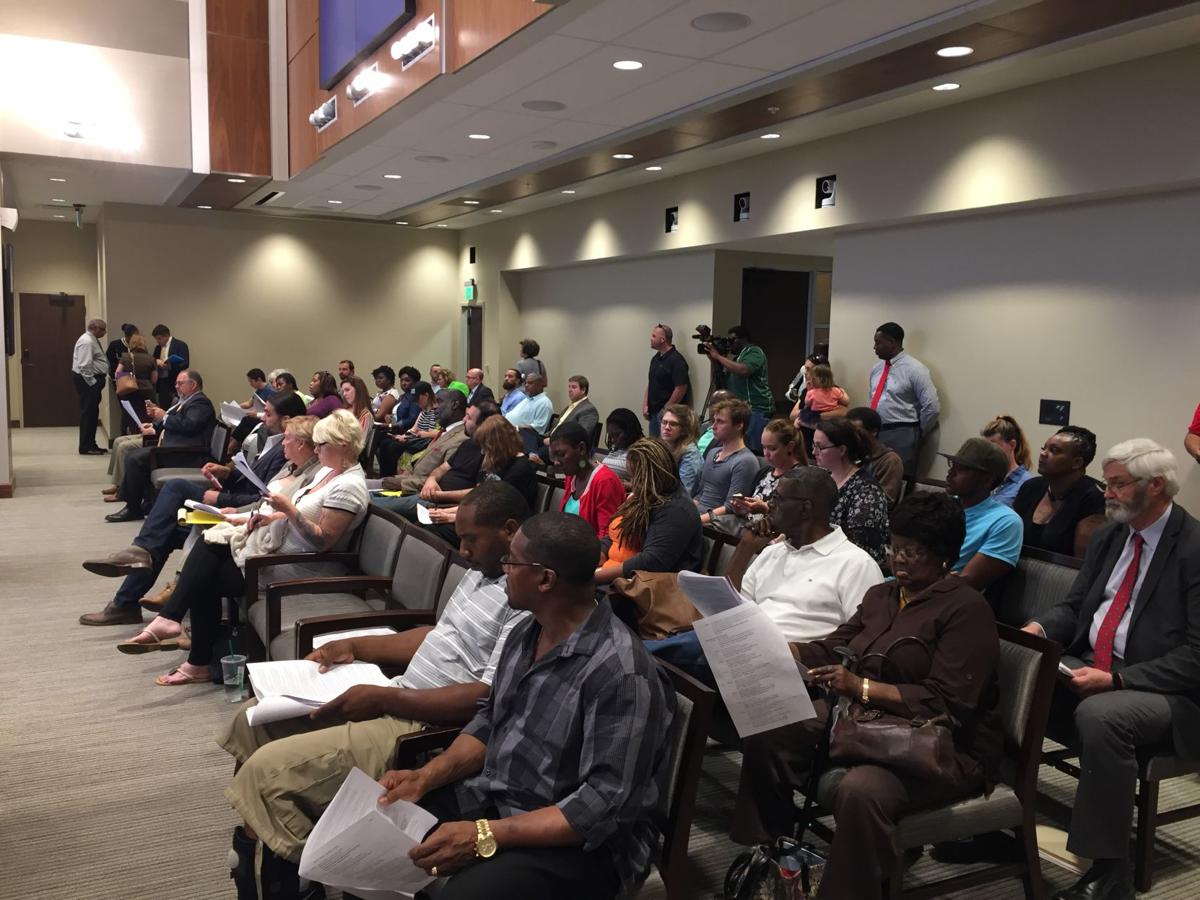 The crowd at the Baton Rouge Metro Council meeting on May 10, 2017. 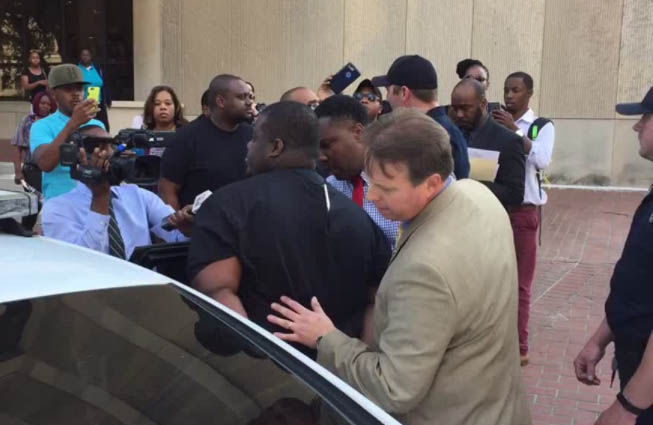 Gary Chambers, publisher of The Rouge Collection, is placed in a police vehicle after being escorted from an East Baton Rouge Metro Council meeting Wednesday, May 10, 2017.

Anne Hollier holds signs during a rally in support of Deyshia Hargrave, a Vermilion Parish teacher who was arrested during a recent school board meeting after questioning a superintendent pay increase, Thursday, January 11, 2018, at Magdalen Square in Abbeville, La.

A rainbow appears in the sky as Deyshia Hargrave, a Vermilion Parish teacher who arrested during a recent school board meeting after questioning a superintendent pay increase, leaves a rally held in support of her Thursday, January 11, 2018, at Magdalen Square in Abbeville, La.

The crowd at the Baton Rouge Metro Council meeting on May 10, 2017.

Gary Chambers, publisher of The Rouge Collection, is placed in a police vehicle after being escorted from an East Baton Rouge Metro Council meeting Wednesday, May 10, 2017.

A viral video of a teacher handcuffed and arrested earlier this month after speaking up at a Vermilion Parish school board meeting inspired critiques from across the country about what many saw as the heavy handed tactics of not only the officer involved, but the board's leadership.

The teacher, Deyshia Hargrave, said she hoped her experience would inspire others to become involved in education and make their voices heard about contentious political issues.

But the video also served as an illustration of the ongoing tensions in many communities about where public officials draw the line when it comes to allowing citizens to weigh in on public debates.

In Baton Rouge, where the political climate has become particularly polarized following the officer-involved shooting of Alton Sterling in 2016, leaders have been grappling for months with how to deal with this exact question. Multiple times over the past year, speakers at Metro Council meetings have been escorted out for speaking off topic or for disrespectful comments.

While none have received the level of attention or outrage sparked by Hargrave's arrest, they raise similar questions: What rights do citizens have to address the politicians they elected? And is it fair to provide reasonable restrictions on public comment in order to ensure that important business is completed?

In the space of less than 72 hours, Deyshia Hargrave went from being an anonymous Vermilion Parish language-arts teacher to an internet sensat…

Most governmental bodies have policies that allow for limited public comment that must be "germane" to agenda items. LSU Law Professor Paul Baier, a constitutional and civil rights expert, said even the famous former Supreme Court Justice Hugo Black, a First Amendment absolutist, conceded that government could set limits on the time, manner and place of citizen input.

But the gray area around what constitutes the meaning of "germane" is where public bodies have landed in hot water, along with consistently enforcing rules as different people approach the podium. Baier and First Amendment attorney Scott Sternberg agreed that Hargrave's civil liberties were violated, based on the video recordings, when she was first cut off and then arrested. During a discussion about the parish superintendent's contract, Hargrave questioned him on how he could take a raise when teachers had not gotten similar pay increases.

Other cases, though, are less clear cut. And some simply worry that Baton Rouge public bodies are not receptive enough to public input.

"The tone of the Metro Council is sometimes that public comment is a nuisance and it's like a hassle that they don't really want to deal with," said Jennifer Harding, the president of Baton Rouge's Progressive Social Network and a dutiful attendee of Metro Council meetings. "It seems like when there's a topic when the Metro Council is uncomfortable with, the rules get very strict about being on topic. But on something less inflammatory, it's not always enforced."

Three Baton Rouge men filed a federal lawsuit in December against the city-parish and Mayor Pro Tem Scott Wilson, claiming that they were subjected to "viewpoint discrimination."

Plaintiffs Mike McClanahan, Gary Chambers and Eugene Collins objected to Wilson having them thrown out of a May 10, 2017 Metro Council meeting. McClanahan and Chambers were kicked out after they brought up the death of Sterling, who was fatally shot by a Baton Rouge police officer in July 2016, when the Metro Council was discussing sewer backups. Collins was kicked out after bringing up Sterling's death when the council was discussing a bill in the Louisiana Legislature related to police officer incident investigations.

A week earlier, federal prosecutors had announced they would not pursue charges in the Sterling case.

Wilson, who runs council meetings, chided them for being off-topic and had them removed at the time. Online fliers had circulated before the meeting that seemed to advocate shutting it down with a protest.

Like Hargrave, Chambers was also handcuffed before taken out by police officers while others chanted about justice for Sterling. Police issued him a summons for disturbing the peace and resisting an officer.

Chambers said the Vermilion Parish school board incident "is almost a mirror situation," but pointed out the difference of him being a black man and the teacher in Vermilion being a white woman. He also said that the woman's comments about teacher pay were more palatable "to conservatives" than his comments about police shootings.

In their lawsuit, the men's attorney said that Wilson has allowed people to speak off-topic in the past, but that he instantly removed anyone who spoke about Sterling and criticized the Baton Rouge Police Department during the May 10 meeting. The lawsuit also brings up a 2013 instance of a man being kicked out of a Jefferson Parish Council meeting, noting the 5th U.S. Circuit Court of Appeals ruled a year ago that a jury should decide whether his First Amendment rights have been violated.

William Most, the attorney representing the plaintiffs in the Baton Rouge Metro Council case, emphasized in the lawsuit that Baton Rouge has a history of suppressing speech, particularly the voices of black citizens. The suit references a 1965 case in which the U.S. Supreme Court ruled that it was wrong for Baton Rouge police to arrest a peaceful protester standing on a sidewalk.

He added the Council already restricts citizens to three minutes of comments.

"What does it say about Scott Wilson if he can't bear to hear three minutes of talk he doesn't like?" Most asked.

Wilson declined to specifically address the lawsuit, but also pointed to recent Metro Council meetings that have lasted more than four hours, and the hundreds of items that council members have to debate and approve each meeting. He said meetings over the past two years have become especially contentious and that the public comment has become more disrespectful from his earlier days on the council starting 10 years ago.

"It's not free speech alley, like LSU," Wilson said. "We have an agenda; we have items on the agenda. Everybody has an opportunity to speak. But you have to stick to the topic."

Asking people to stick to a topic is OK, said Sternberg, the First Amendment attorney. But he said that it has to be universally enforced.

Wilson has been quicker to have people removed from council meetings than Chandler Loupe, his predecessor. Loupe, who is still on the council, said Baton Rouge should consider adding an open public comment period to meetings that would allow people to express their thoughts and frustrations about topics outside of the agenda without the threat of being kicked out. But Wilson disagreed, again pointing to the frequency at which Metro Council members already run out of time to get through their agenda despite public comment being restricted.

Another former council leader, ex-Mayor Pro Tem Mike Walker, also disagreed with the idea of a general, open public comment period. Some smaller boards, including the Capital Area Transit System, have one.

"There's too much business to take care of," Walker said. "The more people you allow to speak, the more they say the same thing. And you just have to not let that happen."

Walker said keeping order in a meeting needs to be the top priority. But he also said respecting the right of citizens who want to speak has to be considered, and described Hargrave getting kicked out of the Vermilion Parish meetings as a grave error and unnecessary confrontation. The president of the Vermilion Parish school board who initially cut her off later announced that he was resigning.

Though the East Baton Rouge Parish School Board has also taken up contentious issues in recent years, the board has not had people thrown out like at Metro Council meetings. Evelyn Ware-Jackson, who recently completed a term as president, said she could not remember such an instance in her seven years on the board.

Ware-Jackson also deployed her own approach to cutting the tension that has led to people being escorted out of other meetings.

"I've tried to keep meetings pretty light," she said. "When things get kind of heavy, I usually bring a little bit of levity to soften things up a bit and keep moving things forward."

And Barbara Freiberg, a former school board president and current Metro Councilwoman, said it's understandable that people become passionate when they discuss schools and government. She agreed that comments at council meetings within the past year became "very personal and very derogatory" and said it's unfortunate that public comments are restricted, though the public cannot be allowed to destroy a meeting's decorum.

"My personal opinion on a topic should not weigh at all on whether someone should try to speak," Freiberg said about striking the right balance. "I would rather fall on the side of giving people their opportunity rather than quieting their voices."

Editor's note: This article was updated Jan. 26 to reflect that Eugene Collins was thrown out of a May 10, 2017 Metro Council meeting after speaking about an agenda item related to a bill in the Louisiana Legislature about police officer incident investigations.