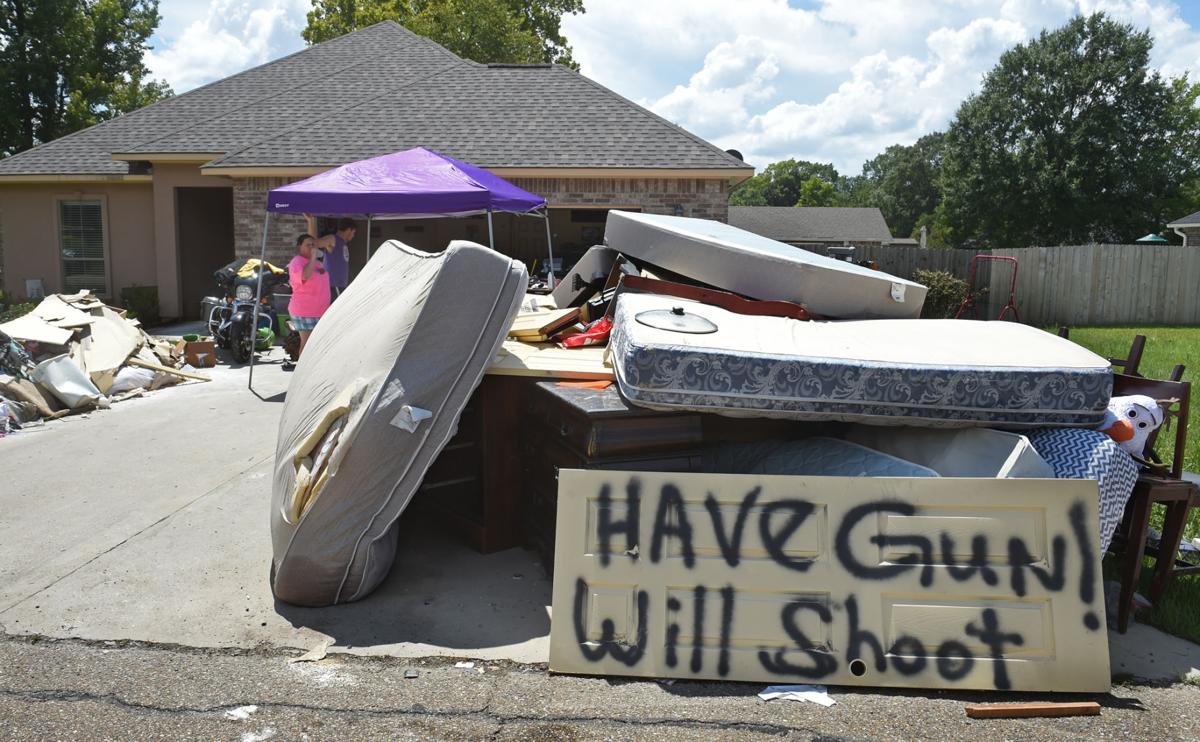 Vic Brady posts an "anti-looting" sign in front of his house as he and other Central residents go about the back and heart-breaking work of cleaning and gutting their homes Wednesday after flood waters receded. 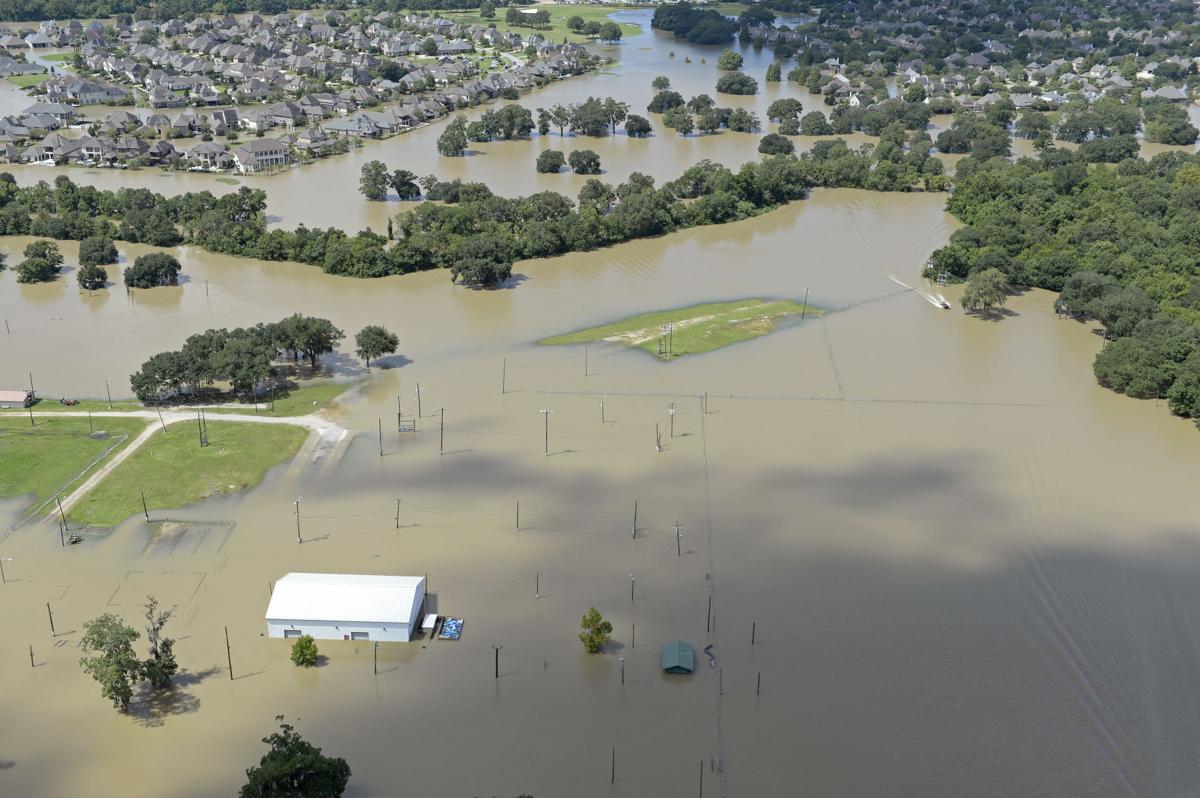 Vic Brady posts an "anti-looting" sign in front of his house as he and other Central residents go about the back and heart-breaking work of cleaning and gutting their homes Wednesday after flood waters receded.

Reports of looting cropping up in flooded areas after people evacuated for drier land prompted the call for a curfew in East Baton Rouge Parish by Sheriff Sid Gautreaux.

Gautreaux said he got an executive order from the Gov. John Bel Edwards to impose the curfew because Mayor President Kip Holden did not exercise his authority sooner, like other parish and municipal leadership had already done in Livingston, Central and Tangipahoa over the past few days.

"As sheriff, I fully recognize that the mayor has the ability to call for a curfew. I have never questioned that authority. However, in my conversations...he has not been willing to do that," Gautreaux said in a press conference. " That's a question he'll have to answer. I don't question his authority but I question his decision not to."

The curfew is from 10 p.m. to 6 a.m. and was to take effect beginning Tuesday. Gautreaux said it will remain in place until conditions in the parish improve.

Holden, who immediately responded by calling into WAFB for a live interview, responded that he has "no issue whatsoever" about the curfew itself "just the way all of this has been handled. I don't want to get into a back and forth about the sheriff and myself."

"I'm not going to be concerned about the politics, I'm still going to focus on the people," Holden said.

In addition to the arrests, some people returning to their homes Wednesday said others had invaded their residences while they were away seeking safety.

"They took all the TVs, everything they could get their hands on. Everything I had up high, all my appliances and stuff," said Elmira Perkins, 56, who returned to her home on Cleo Court in north Baton Rouge on Tuesday.

Off of Tiger Bend Road in south Baton Rouge, Nakia Chilton and her family were moving a big-screen TV into a pickup truck to haul it away.

She said she didn't want to give thieves an opportunity to pilfer her flooded house like they did her neighbor, who'd returned to find valuable items missing during the days of the flood.

"Right here, the police were right here," Chilton said, motioning to Antioch Street, where she lives. "But they might have thought they lived there."

Chilton said her neighbors believe they may have been robbed by someone they know. She noted there's no way for law enforcement or passersby to realize if someone was taking items from a house illegally because the region is now dotted with residents in hazmat gear, ripping out the insides of their homes.

The arrests prompted a sharp warning from Holden.

"We are not going to tolerate lawlessness of any kind or anywhere in our city," Holden said in a statement. "No part of our city will be unprotected. If you break the law, you will be arrested and prosecuted. The protection of our city and its citizens are top priority."

Sgt. Don Coppola Jr. with the Baton Rouge Police Department, said two men were arrested in the 2800 block of Dougherty Drive around 1 a.m. Tuesday and four more people were arrested at about 4:15 a.m. near the intersection of Beachwood and Charles streets.

Those arrested in the first incident were Adrian Ard, 50, of Baker, and Ronald Talbert, 61, of Baton Rouge, both on counts of looting, simple criminal damage to property and resisting arrest.

Those arrested in the second incident were Dewayne Curry, 18; Darnell House, 20; both of Baton Rouge, and two juveniles aged 15 and 16.

Sheriff's deputies arrested four people who they said robbed a Dollar General on South Harrell's Ferry Road late Monday night, who admitted to entering the store with the "intent to steal supplies that they needed after losing items during the storm," an arrest report said.

They stole $750 worth of items, the report said.

Those arrested in the incident were Dewayne Winborne, 24, Kentrell Henderson, 27, James Henderson, 20, and Aaron Pounds, 18, all from Baton Rouge. They were each booked into parish prison on counts of looting and theft.

The Baker Police Department arrested four others Monday morning and officials said the alleged thieves were in the process of burglarizing a Brother's Food Mart on Groom Road. Officers found the suspects had taken eight bottle of alcohol and seven boxes of cigars.

Dedrick Green, 24, Tristen Aubert, 25, and Michael Dunn, 36, all from Baker, were arrested in the incident, in addition to Anthony Kinchen, 32, from Baton Rouge. They were charged with looting, simple burglary and unauthorized entry of a dwelling during an emergency.

Kinchen and Green had additional charges of possession of marijuana.

Gautreaux said the curfew was a measure to curb looting. But some local businesses, particularly those in areas that did not flood, expressed concern that it would hurt business.

Josh Duke, co-owner of Olive or Twist, was critical.

"I think it's crap," he said. "We haven't closed a single night since Thursday."

Remi DeMatteo, general manager of The Bulldog, said he was concerned about loss of business and giving people relief after a hard day's work.

“For people who have gone through a whole day of working and cleaning, they need a respite at the end of the day," he said, adding he would have preferred a midnight curfew. “The last couple of nights, people were coming in a little later."

Some rail against BR curfew as businesses lose patrons

A curfew in East Baton Rouge parish is changing hours for all kinds of businesses, affecting everything from available flights at the Baton Ro…

In the fourth day after East Baton Rouge Parish Sheriff Sid Gautreaux imposed a controversial curfew, people were still being arrested for bei…

A midnight to 6 a.m. curfew for East Baton Rouge Parish residents will remain in effect at least through Tuesday morning, according to the She…