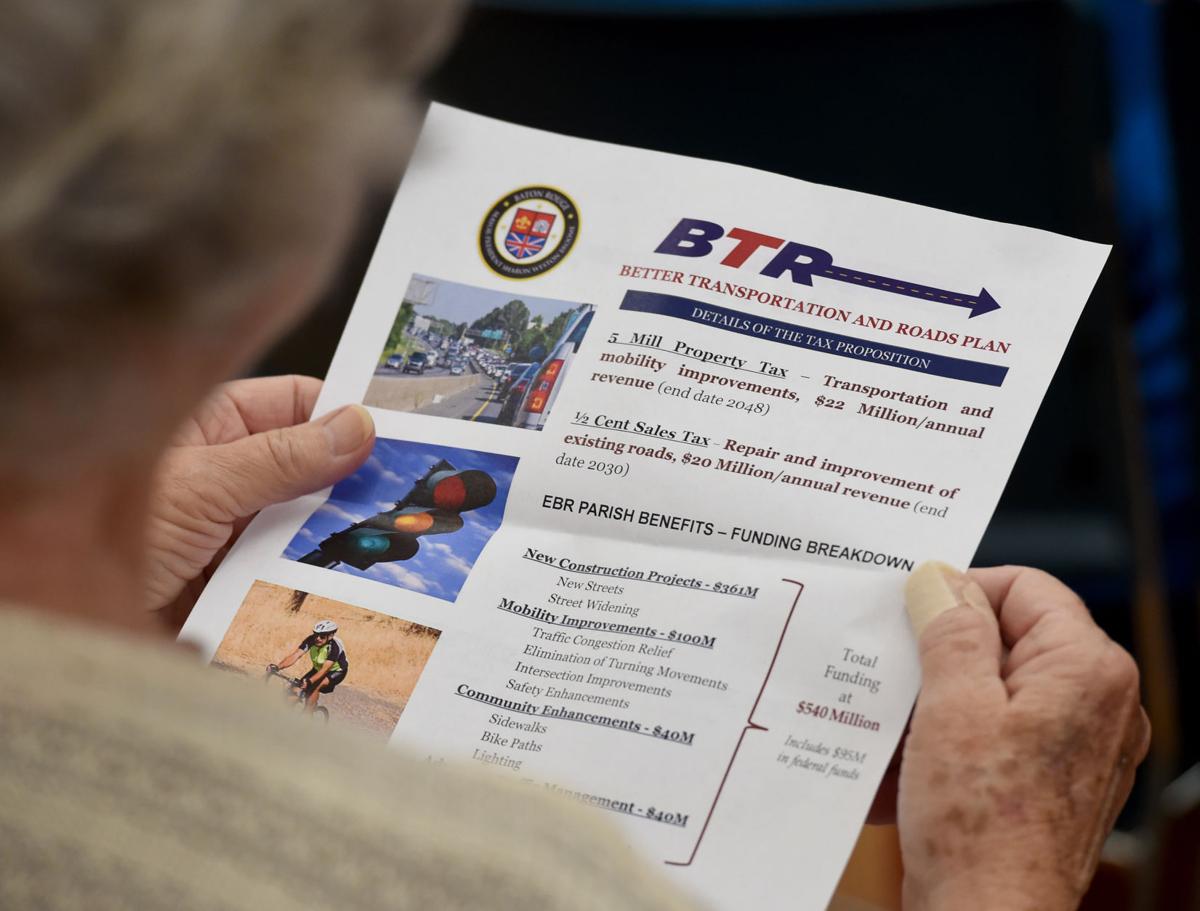 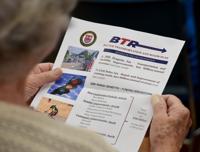 A woman looks at an information sheet as Mayor Sharon Weston Broome and Fred Raiford, director of Transportation and Drainage, answer questions from citizens about Broome's Better Transportation and Roads Plan in a meeting at St. Aloysius Tuesday. The plan calls for a 5-mil tax to fund $540 million for the improvements. 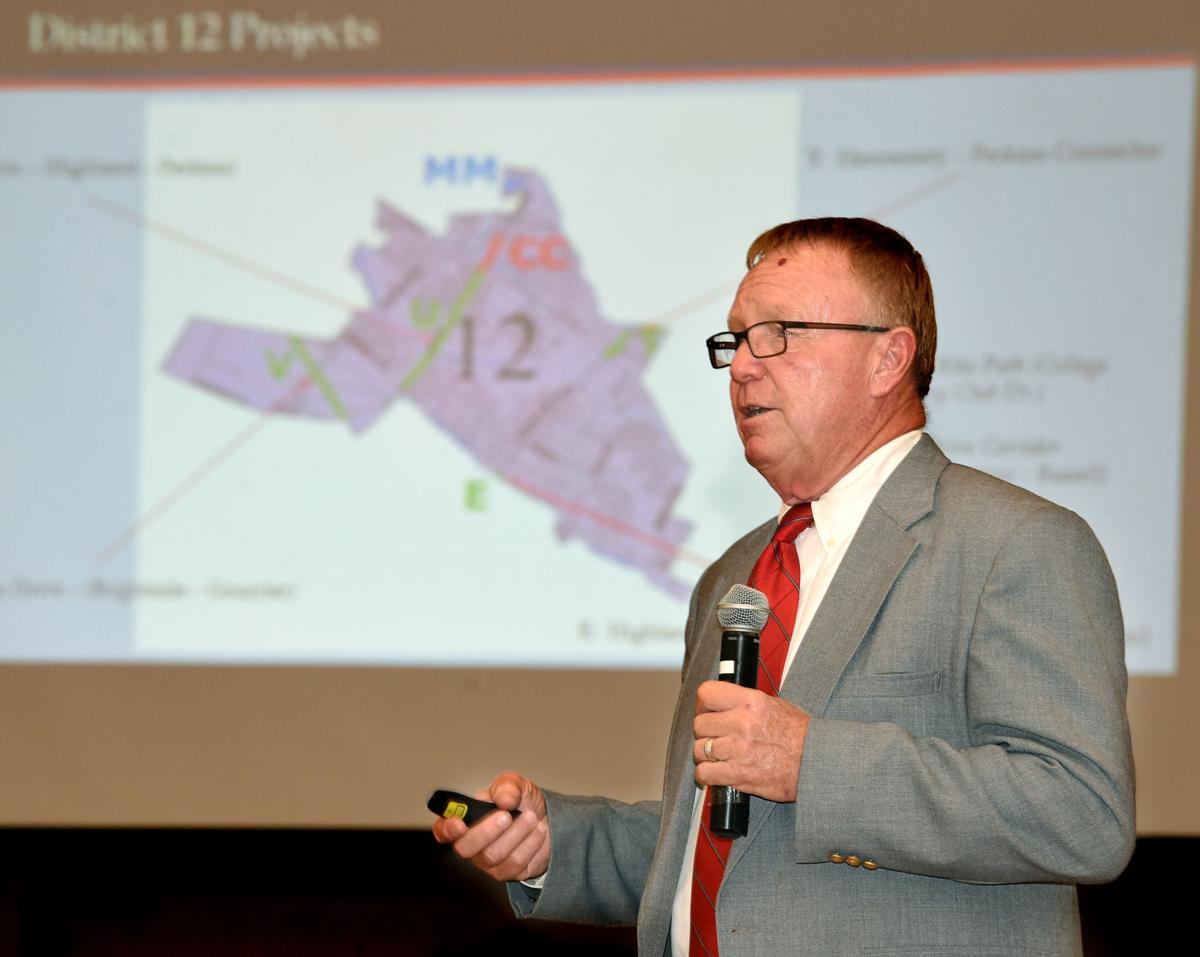 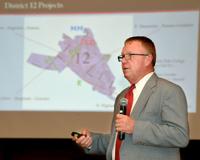 Fred Raiford, director of Transportation and Drainage, answers questions from citizens about Broome's Better Transportation and Roads Plan in a meeting at St. Aloysius Tuesday. The plan calls for a 5-mil tax to fund $540 million for the improvements.

A woman looks at an information sheet as Mayor Sharon Weston Broome and Fred Raiford, director of Transportation and Drainage, answer questions from citizens about Broome's Better Transportation and Roads Plan in a meeting at St. Aloysius Tuesday. The plan calls for a 5-mil tax to fund $540 million for the improvements.

Fred Raiford, director of Transportation and Drainage, answers questions from citizens about Broome's Better Transportation and Roads Plan in a meeting at St. Aloysius Tuesday. The plan calls for a 5-mil tax to fund $540 million for the improvements.

The East Baton Rouge Parish Metro Council's decision Wednesday on whether or not to put the mayor's proposed roads tax on the November ballot could come right down to the wire.

"I really haven't made up my mind yet," noted Buddy Amoroso.

During their meeting later this week, the 12-member council must decide whether to call for the property tax election. The deadline to submit the item to the Secretary of State is Sept. 25. If the council approves the ballot measure, voters in the parish will make the final call during the election in November.

Mayor-President Sharon Weston Broome has proposed a 5-mill property tax that would pay for various road improvement projects. The full list, which the administration has dubbed the "Better Transportation and Roads" plan, can be viewed at brgov.com/btr.

Broome has said the city-parish must address its infrastructure in order to thrive and that her proposal offers the best way forward. It includes not only widened roads and other infrastructure changes aimed at relieving congestion, but also technological upgrades like synchronized traffic lights.

Critics, however, have questioned individual projects and asked why more attention was not given to drainage issues, especially in light of last year's flood. They've also pointed out similarities between Broome's plan and one authored by former mayor Kip Holden, which failed at the polls less than a year ago.

The fence-sitters are still weighing their various needs and wants. On the one hand, voters in District 6 seem on board, and even projects elsewhere help calm traffic and help drivers get around faster, said Collins-Lewis, who represents an area bounded by Greenwell Springs Road on the north and then south past Florida Boulevard.

On the other hand, Amoroso worries that residents of his district in the southeast part of the parish are hitting their taxing limit, and he's worried about how to raise money to fix drainage, which is not a primary concern of Broome's plan.

"It's going to be a close call," Cole predicted.

He also wondered how drainage issues will be addressed, especially with hurricanes hammering the Gulf Coast on both sides of Baton Rouge. Cole also wants to see his own district — a slice of Baton Rouge from Mid-City up to Evangeline Street — gets its fair shake.

"You can't leave District 7 out of the question," due to all the major non-interstate east-west routes that run through, he said.

Councilwomen Tara Wicker and Barbara Freiberg said they would leave it up to the public to decide and will vote to put the measure on the ballot.

"The voters have a right to make the determination," Wicker said.

She said voters in her district — around downtown and Old South Baton Rouge — seem generally supportive of the tax. Asked if she would vote for it in November, Wicker said she's still gathering information, reviewing the plans and waiting to see if the administration tweaks the proposal before Election Day.

Councilman Matt Watson is also waiting for more information, and he's tired of it. The mayor's administration planned to meet with each district, but his own, which includes much of the the Jefferson Highway and Bluebonnet Boulevard corridors, aren't scheduled to have theirs until Tuesday evening — less than 24 hours before the vote is to be called. Watson asked how his constituents' concerns are going to be incorporated into the design in any meaningful way.

"I guess it's appropriate that I'm District 11, because at the eleventh hour is when my people are going to get an opportunity to find out what this proposal is," he said.

"Better late than never, but it ain't going to do any good. ... Everyone is opposed to this," Watson said. Voters in his district narrowly rejected the Holden road tax proposal last year.

Interim Chief Administrative Officer Jim Llorens said Broome's staff is working to answer any questions about their proposal, quell any reservations and convince those still considering their choice to support the ballot measure. He urged the council members to leave the decision up to the voters.

"The public should have a right to vote," he said.

If the tax measure is approved by the council for the ballot, the administration plans to hold a second round of community meetings before the November vote.

Like Watson, Councilwoman Chauna Banks was also critical of the administration, saying they should have been meeting with community leaders before releasing their plan so they could figure out local needs and foster more buy-in from voters. Banks, who represents areas around Scotlandville and Baker, said she can't support the current version of the plan because north Baton Rouge doesn't get an equitable share of the spending.

Freiberg said her constituents are split. The group, many of whom live between Perkins and Highland Roads, wants road upgrades but isn't sure another property tax is the way to do it. They also worry whether extending Kenilworth Parkway through to Burbank Drive will make a highway through a heavily residential area, Freiberg said.

People who live in Kenilworth, Southdowns and other pockets of south Baton Rouge grappled Tu…

However, the councilwoman was supportive of the plan, adding that she recently traveled to Dallas and recalled thinking that the roads there proved to her that proper infrastructure can be a thing of beauty.

"We know that the need is critical," Freiberg said.

Less than a year after the Metro Council refused to put the mayor’s roads tax proposal on a parish-wide ballot, Sharon Weston Broome is return…