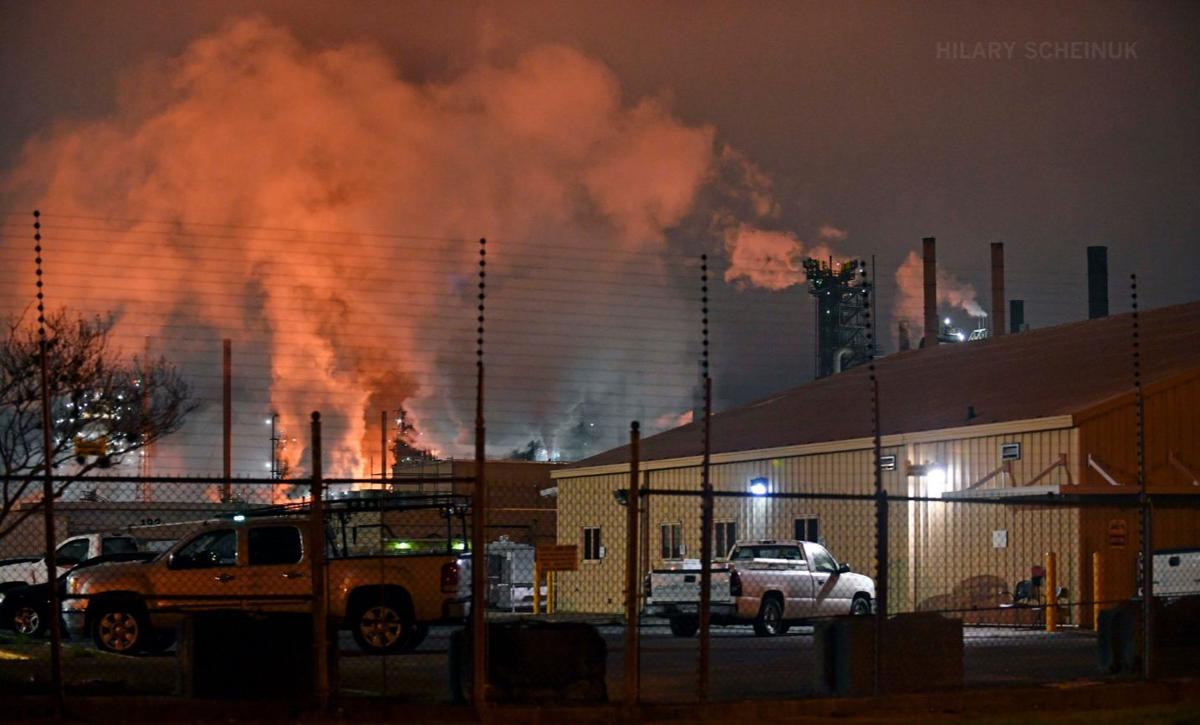 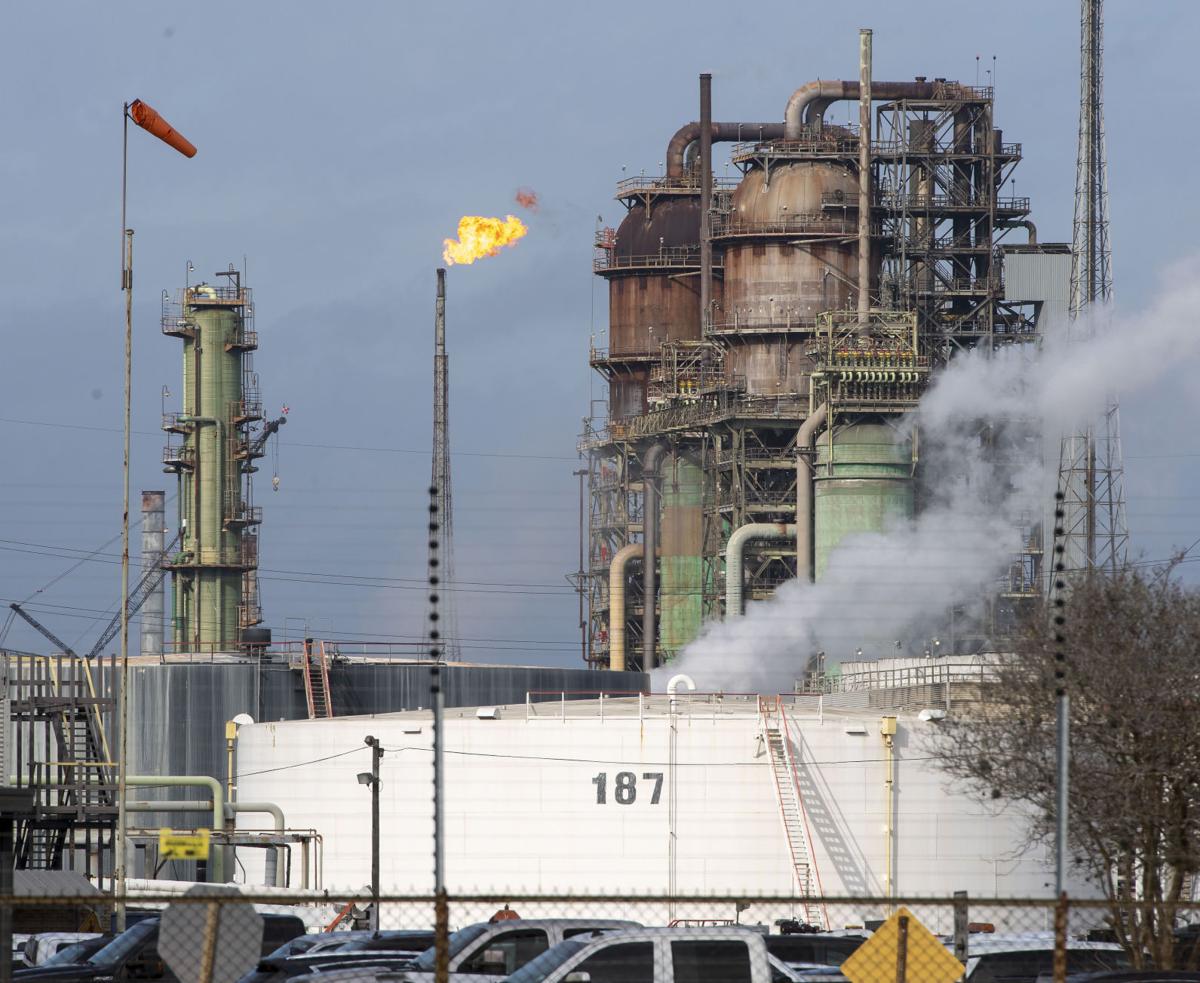 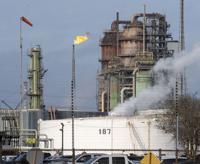 ExxonMobil says tens of thousands of pounds of unspecified flammable vapor were released during a spectacular fire at its Baton Rouge refinery last week but most of the material was consumed by the blaze and none of it escaped the plant in concentrations that could have posed a risk to people.

A state senator will hold a hearing Wednesday night to explore how the industrial giant responded to the fire and whether its notices during the blaze were sufficient to ensure public safety. In a report released Tuesday — required under state Department of Environmental Quality guidelines — ExxonMobil said that while some "reportable quantities" of some materials were detected at the site of the fire, there was no risk outside ExxonMobil's property.

"Since air quality monitoring did not detect any impact outside of the facility, assessments by (various agencies) indicated that neighbors did not need to take any action. Therefore, no alert was issued by the city or emergency response agencies," ExxonMobil said in a Q&A that accompanied its report to regulators.

The company said more than 13,000 pounds of sulfur dioxide was released, along with 2,681 pounds of cancer-causing 1,3 butadiene, were among the material released. It said up to 98% of the chemicals were burned up in the blaze.

No one was injured.

The ExxonMobil refinery and company facilities that produce chemicals, resins, polyolefins and other material are in a lightly populated area of North Baton Rouge west of Interstate 110. Tuesday's report said winds were mainly blowing from east to west the night of the Feb. 11 fire, meaning fumes and smoke would have been carried over the Mississippi River and not into populated areas.

A "reportable quantity" is a term of art in state and federal regulations and refers to the threshold amount of a chemical release that would require notification to state agencies.

Other chemical totals are benzene, another carcinogen, at 33 pounds; liquid sulfuric acid at 35,290 pounds; and five barrels of oil. The precise totals for 1,3 butadiene and flammable vapor are 2,681 pounds and 62,093 pounds, respectively. All these amounts exceeded the reportable quantity threshold, but ExxonMobil said none of the 126 readings it took detected the material escaping the plant.

The incident also involved the release of hydrogen sulfide, but it did not exceed the reportable quantity threshold, which is 100 pounds, ExxonMobil said in the report to DEQ.

The company said it began air monitoring at 11:30 p.m. around the hot zone of the fire, less than 15 minutes after the fire was discovered at 11:16 p.m.

The company pointed out that monitoring results from ExxonMobil, the state Department of Environmental Quality, and a Baton Rouge Fire Department Hazardous Materials team collected air readings that were below the state's ambient air standards for volatile organic compounds, benzene, butadiene, sulfuric acid, hydrogen sulfide and carbon monoxide, a known byproduct for burning some of the compounds involved.

State Sen. Cleo Fields will hold a community meeting 6 p.m. Wednesday to discuss the fire at the ExxonMobil complex off Scenic Highway last week and the results of a regulatory filing that is expected to estimate chemical releases from the incident.

A statement from Fields, D-Baton Rouge, says he will decide whether to introduce new legislation "necessary to ensure the safety of the state’s citizens" after holding the meeting and receiving other community input.

Fields has invited state agencies, such as the state Department of Environmental Quality's Hazardous Materials Division, to the meeting at Star of Bethlehem Baptist Church, 6274 Scenic Highway, Baton Rouge.

A fire inside the massive ExxonMobil refinery cast an orange glow across the Baton Rouge sky early Wednesday, alarming residents but causing n…

The fire was found about 11:16 p.m. Feb. 11 in what sources have told The Advocate and Reuters is the refinery's distillation unit. It took until 5:45 a.m.

ExxonMobil reported to an emergency Louisiana State Police hotline that flammable human carcinogens benzene and 1,3 butadiene and other flammable or toxic chemicals were part of the release. The reporting is required by law to help coordinate the emergency response.

Despite large plumes emanating from the raging blaze, though, air monitoring by ExxonMobil, Baton Rouge firefighters and state regulators did not detect harmful concentrations of any chemicals in the air inside, near or away from the plant, including in Port Allen across the Mississippi River.

Fields said he decided to call a meeting after hearing from constituents concerned about the notification process and lack of clarity about the fire's cause and potential health impacts from the chemical releases. He plans to determine whether proposed legislation would be appropriate, including tightening requirements for when the public is notified about possible impacts and how facilities are monitoring emissions before and during a chemical release.

"In a perfect world, there would be no accidents," he said. "Of course we can't control that. What we can do is make sure the proper actions are being taken after an accident does occur."

Fields also noted ExxonMobil's long history in Louisiana. The company has been an integral part of Baton Rouge's local economy for the past several decades.

"Exxon is a major employer and a big corporate citizen in our state. But we all want responsible neighbors," he said. "We're working to make sure that all our residents are safe — because sick people can't work well and dead people can't work at all."

The massive fire overnight Tuesday at the ExxonMobil Refinery in Baton Rouge is suspected of releasing cancer-causing chemicals benzene and 1,…

Tuesday's "seven-day" report can be updated as more information becomes available. The company, DEQ and other regulators will attempt to establish a root cause for the incident and determine whether it was preventable. DEQ and others could impose penalties depending on what they find.

That chemical, which is flammable and explosive, is responsible for the natural rotten egg smell in sewer lines at very low concentrations. In very high concentrations, at 1,000 or more times greater than what occurs with waste, people lose their ability to smell the gas and it will act as a fatal asphyxiant.

Company officials told State Police that flaring necessitated by the "unit upset" from the fire had resulted in releases of sulfur dioxide that exceeded 500 pounds.

Flaring is when a facility intentionally burns material for safety or environmental reasons.

The Baton Rouge refinery is the company's second largest in the U.S., behind only one at Baytown, Texas, and can handle 502,500 barrel-per-day.

The oil major is an important employer in the region. Its 2,100-acre complex north of the State Capitol includes not only a refinery but also chemical, polyolefins and resins plants.

Combined, Baton Rouge's ExxonMobil facilities had about 7,000 workers in 2018, including contractors. More than 3,000 worked in the refinery as an employee or contractor, according to the company.