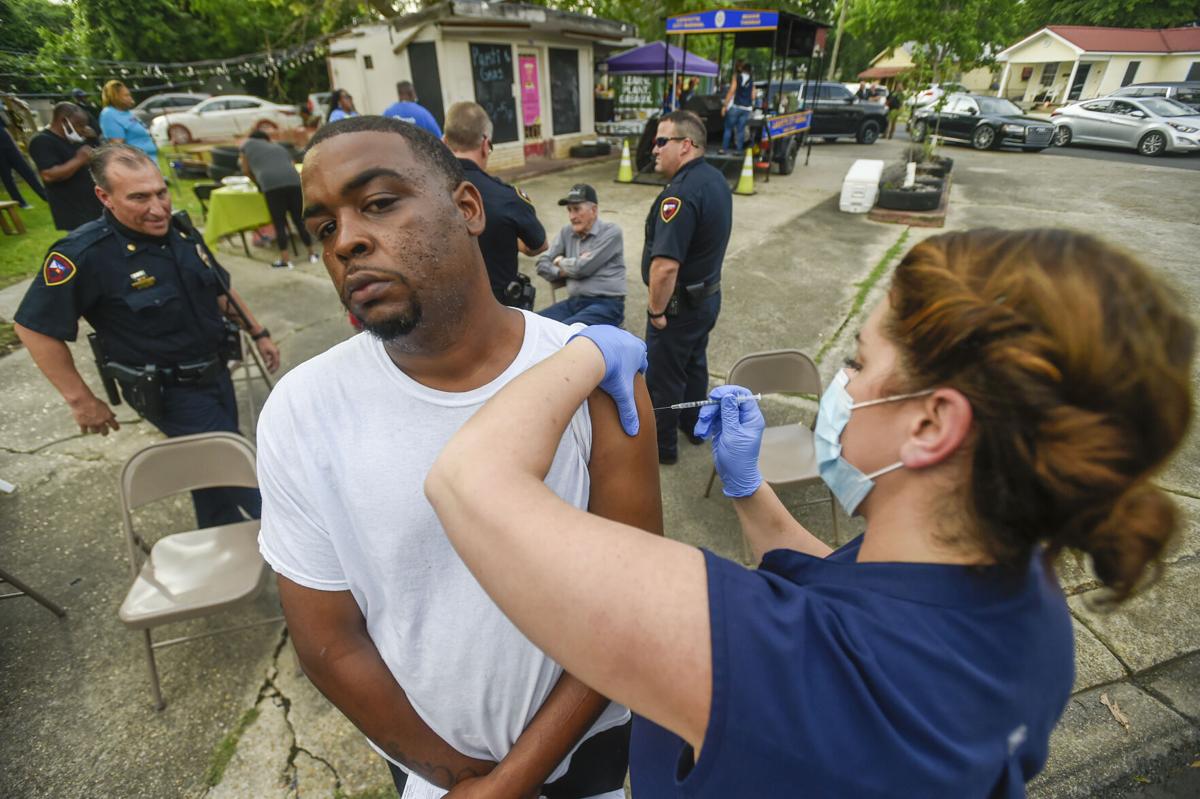 Resident Courtney Nathan,left, gets his COVID Vaccine from Raven Hulin, RN. with Ochsner Lafayette General Medical Center during a community walk in the neighborhood of McComb-Veazey on Monday, May 3, 2021 in Lafayette, La.. Law Enforcement Officers with the Lafayette Police Department, Lafayette Parish SheriffÕs Office and the Lafayette City MarshalÕs Office will be walking the neighborhood to visit with residents, listen to any concerns and introduce themselves. Food will be provided and Ochsner Lafayette General Medical Center Professionals will be on site administering COVID-19 Vaccines. 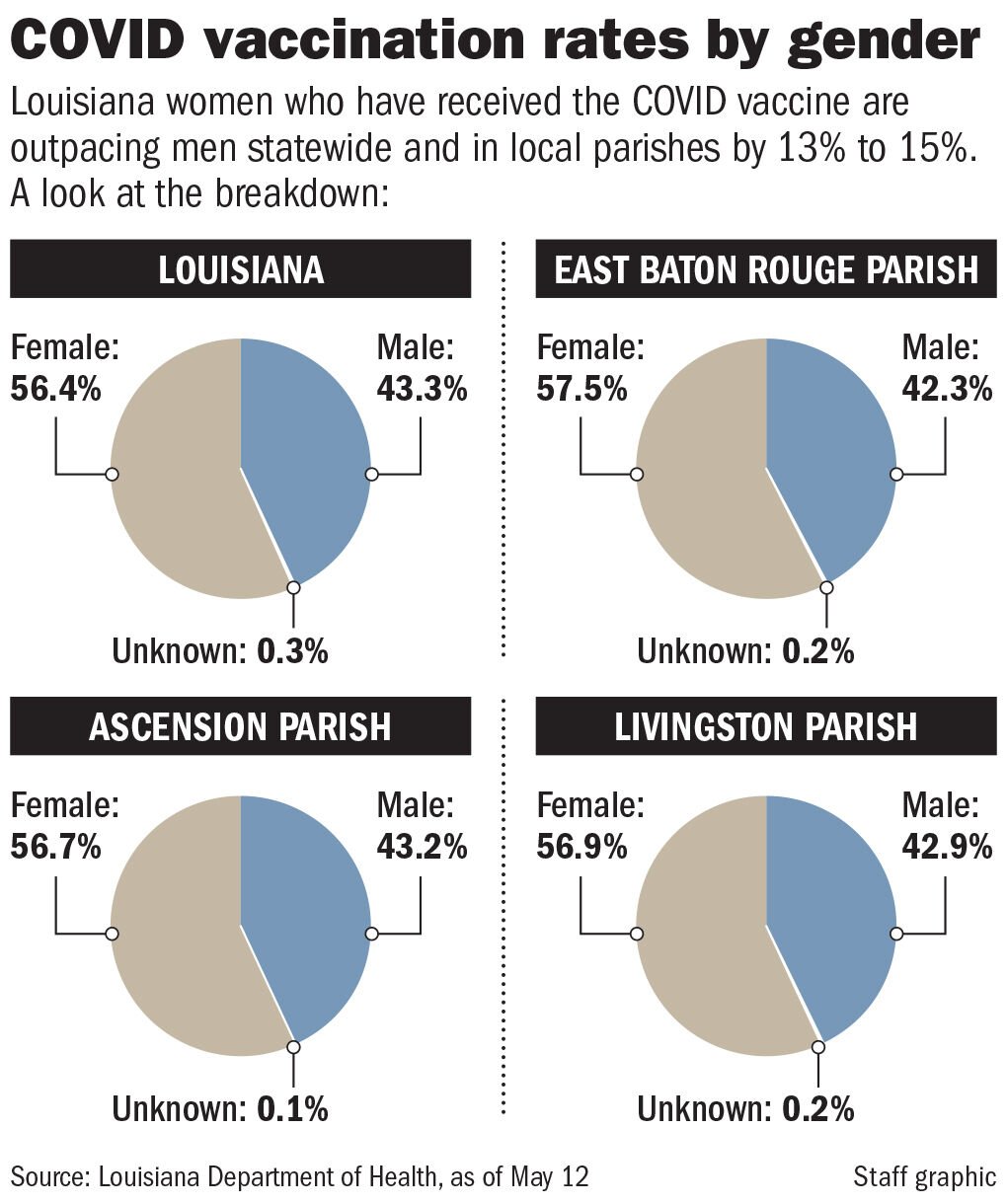 Marion Jackson sat on the bleachers at a basketball court in North Sherwood Forest Park on recent afternoon, watching the guys bet on who could make a long-distance, half-court shot.

Round after round, the guys went, picking up and putting down cash from their pockets as Jackson, 24, rested from his earlier role of rebounding stray balls from their mostly missed shots.

Since the COVID-19 vaccine roll-out began, Louisiana has left one out of every five doses made available by the federal government on the tabl…

Though he said he believes a close family member died from COVID, Jackson, who works as a delivery driver, said he doesn’t plan to take one of the new coronavirus vaccines and doesn’t believe many of his friends on the court or elsewhere will being doing so either.

The reason, he said, is trust — in the vaccine, in media and in government.

“Ain’t nobody taking that b****,“ said Jackson, who lives near Denham Springs.

Since the vaccines began to roll out in Louisiana late last year, the state has seen a persistent gap in the numbers of men and women getting inoculated. The disparity has somewhat narrowed over time. Still, it remains more stark than nationwide figures.

Through Thursday, women made up 56.3% of Louisiana residents who have taken at least one shot compared to nearly 43.4% who are men, state statistics show. The difference is about a percentage point wider for completed vaccinations.

The nearly 13-percentage point gender gap in those who have taken at least one shot is about three-quarters greater than the difference in vaccinations for women and men nationwide, according to data from the U.S. Centers for Disease Control and Prevention.

General concerns offered by Jackson — he said he might take the vaccine if he had to, or if he were given significant cash, like $1,000 — echoed the thoughts of more than a dozen men interviewed in Baton Rouge-area bars, restaurants, courts and after-work hangouts in the past two weeks.

While hardly a scientific representation of local attitudes, a few said they had taken the vaccine, but more said they hadn’t and were reluctant to do so. They said the vaccine had no long-term track record, while, at the same time, they believed their risk of serious consequences from the virus were very low.

While some experts noted these fears are rooted in a fundamental misunderstanding about how the vaccines were developed, some men added that the persistent public messaging from the government and the media made them suspicious of taking the vaccine.

George Webb, a 47-year-old Prairieville father who works in the chemical industry, said convenience hasn’t been the issue for him. His job has offered the vaccinations.

But he said he felt the vaccine was too new and wanted to see more data first, perhaps a few years down the line. He added that he perceived his risk of death from COVID as minimal, with the mortality rate at less than 1%.

“So, I mean, why am I going to put something in my body that they don’t know enough about?“ Webb asked outside a Geismar gas station on La. 30 on a recent mid-afternoon. “I know people that have taken the vaccine and gotten sick that have had a perfect bill of health. I ain’t doing it.“

Louisiana COVID numbers: 1 out of 3 people has received at least one vaccine dose

In Louisiana, 45,897 more doses of COVID vaccines have been administered, according to a noon update from the Louisiana Department of Health.

When asked if his attitude might be different if he were an older man, Webb instead noted that he might have taken the vaccine if he were a young man again, less wise to how the world is.

“I’ve been around long enough to know that there’s always somebody trying to control you,“ he added. “So, I’m not down with that.“

While vaccine hesitancy among African-Americans, some other minority groups and more Republican-leaning voters have been well noted, the gender gap has been a less explored angle.

CDC and Louisiana Department of Health officials declined to offer a reason for the gap.

A Health Department spokesman offered a similar answer, saying agency officials would only be speculating about why.

Following recommendations from the U.S. Centers for Disease Control and Prevention, Gov. John Bel Edwards on Friday said those who are fully v…

Some physicians and public health experts offered a mix of reasons: basic demographics, the traditional role women take in overseeing the family’s health care, and the well-noted male reluctance to see the doctor, access preventative care or even have a primary care doctor.

These experts noted that the earliest phases of the vaccine rollout focused on vulnerable groups, including nursing home residents, the elderly and teachers. Those groups tend to skew female.

Women, on average, live longer than men, meaning more were likely in those first groups getting vaccinated. In 2016, for example, the United States had 79 men ages 65 and older for every 100 women the same ages, census estimates show.

Since vaccines opened up to those 16 and older on March 29, the gap between men and woman has narrowed by 3.4 to 5.4 percentage points. But the pace of newly initiated vaccinations has also slowed, state health data show.

Dr. Rachael Kermis, a family medicine physician affiliated with Baton Rouge General, said she has seen the difference between women and men in her own practice.

“I definitely think so,” she said. “I mean, kind of going back to like what I’ve seen over years before with the flu vaccine, that females seem to be a little bit more likely to get the flu vaccine than their male counterparts, and it’s that kind of same discrepancy is going on now with the COVID (vaccinations) as well.“

She added that women tend have greater familiarity with and use of the health care system, often making appointments for their husbands and the rest of their families. Men show up less often, and so, Kermis speculated, may be missing chances for one-on-one education about the vaccine.

Susan Hassig, a Tulane University epidemiologist, said that, in her view, public understanding of the development of the vaccines isn’t good.

Many have focused on the quick roll-out through Operation Warp Speed, but the Moderna and Pfizer/BioNTech vaccines were the fruit of nearly two decades of coronavirus vaccine research sparked by the SARS outbreak in China in 2003.

Under non-emergency conditions, that work happens slowly as pharmaceutical companies balance annual research-and-development costs against the risk that a candidate vaccine won’t work once its developed.

But she said the federal government’s push during the pandemic removed the financial risk for the companies, allowing research to happen much more quickly.

That fundamental misunderstanding of the vaccine’s safety, Hassig explained, is being balanced by some against an underestimation of the unknowns involved in the long-term health effects from catching the virus, even if they are very unlikely to die.

Our Views: The vaccinated can go maskless, but the unvaccinated need to step up.

Oh what a relief that the vaccinated among us can go without masks in many situations. But for hospitals and health centers, public transporta…

“So, yeah, it was developed quickly,“ she said. “No denying that. That doesn’t mean it wasn’t developed carefully and that’s the difference. Speed does not necessarily mean shoddy.“

While there’s no long-term data on the vaccine’s effects, Hassig said, the vaccine has proven safe so far with a tiny number of adverse incidents following clinic trials and at least one shot in more than 156 million Americans.

Outside the Geismar gas station on La. 30, industrial contract workers Darryl Snell, 70; Richard Roddy III, 62, and some other men in their crew were teasing each other over after-work beers.

Snell, Roddy and Roddy’s adult son, Lonnie, had gotten vaccinated, they said. Another man in their group said he wouldn’t be getting the vaccine, while another, Ernest Allen, 48, of Gonzales, said he was unsure and still trying to gather information.

Each man had his reasons.

A debate over the efficacy and safety of COVID-19 vaccines broke out in a Louisiana House committee Monday, with multiple Republican lawmakers…