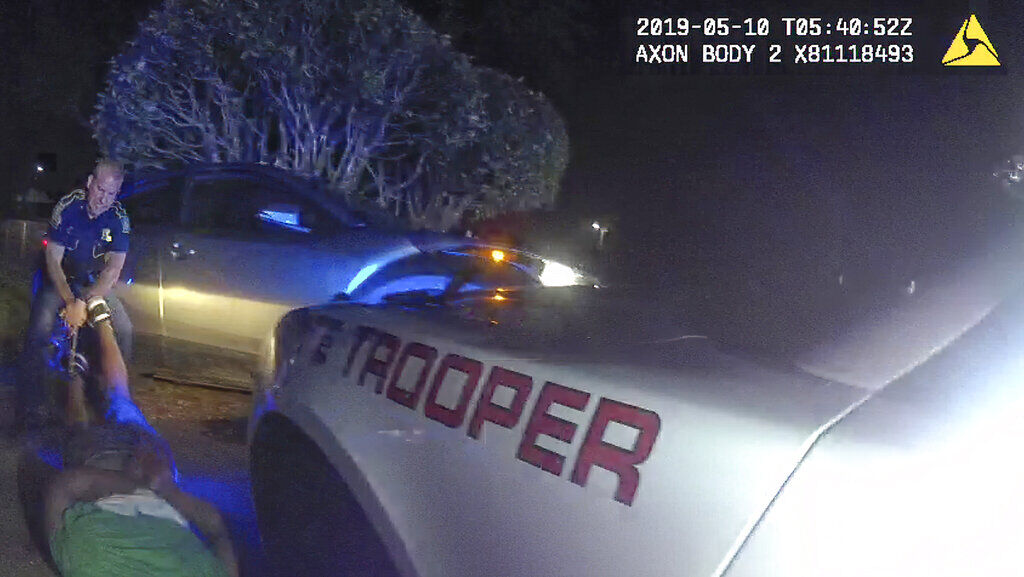 This image from video from Louisiana State Police trooper Dakota DeMoss' body-worn camera, shows trooper Kory York grabbing the leg shackles and dragging Ronald Greene on his stomach on May 10, 2019, outside of Monroe. 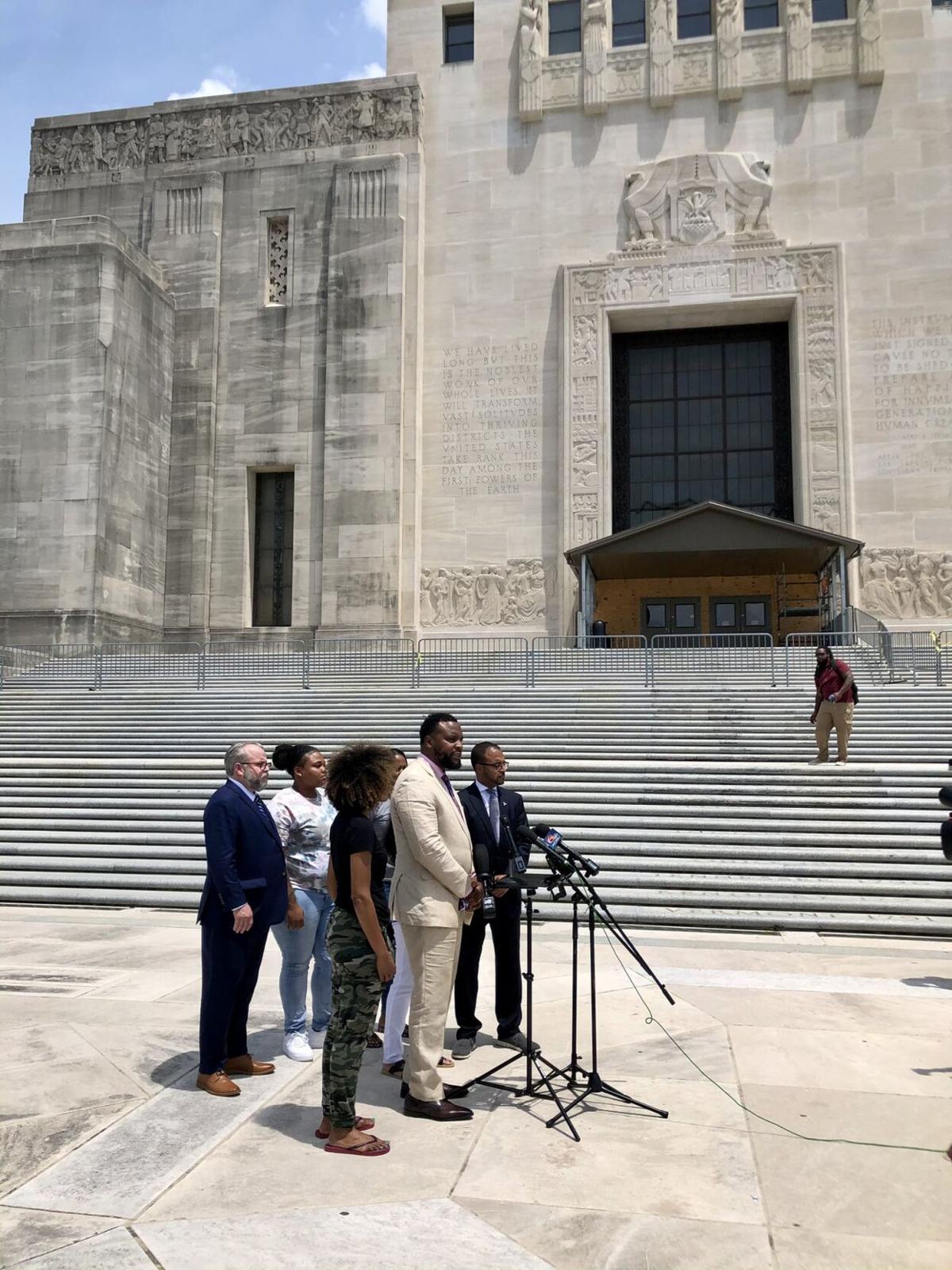 Advocates and attorneys for the family of Ronald Greene, who died in State Police custody, hold a press conference in front of the State Capitol on Thursday. They are calling for criminal charges against the officers whose were involved in Greene's death.

This image from video from Louisiana State Police trooper Dakota DeMoss' body-worn camera, shows trooper Kory York grabbing the leg shackles and dragging Ronald Greene on his stomach on May 10, 2019, outside of Monroe.

Following the recent release of bodycam footage showing Ronald Greene taking his last breaths after being brutally beaten and tased by several Louisiana state troopers, attorneys and advocates on Thursday amplified calls for criminal charges against the officers involved.

The May 2019 incident is part of an ongoing federal civil rights investigation. State Police officials said the question of criminal charges falls to a federal grand jury. Officials have not provided a timeline on when a grand jury decision might come down.

"Mr. Greene was killed by these state troopers," said Marc Morial, the national Urban League president. "After seeing that video, no reasonable person could come to any other conclusion other than a crime has been committed, by Louisiana state troopers."

Morial, the former mayor of New Orleans, participated in a media call Thursday morning with attorneys for Greene's family and other advocates. They called for the immediate arrests and prosecutions of the troopers involved, along with a review of State Police actions.

Advocates and attorneys later held a press conference in front of the State Capitol at noon Thursday.

"We are not interested in another apology, handholding or a kumbaya moment," Attorney Lee Merritt said. "We want justice for the family of Ronald Greene."

The family and their attorneys were scheduled to meet with Gov. John Bel Edwards that afternoon. A rally was also planned for 3 p.m.

So far, one of the troopers involved — Chris Hollingsworth, who was caught on tape saying he "beat the ever-living f***" out of Greene — died in a single-vehicle crash last year hours after learning he would be fired for his actions. Another trooper, Dakota DeMoss, faces pending termination, and a third, Kory York, received a 50-hour unpaid suspension earlier this year for kicking and dragging a handcuffed Greene.

The highest ranking trooper on the scene, Lt. John Clary, misled internal investigators about what happened, saying Greene was still a threat to flee after being shackled and denying the existence of his own bodycam footage, the Associated Press reported earlier this week. State Police officials said internal investigators are still trying to figure out "why those videos were not identified during the original criminal investigation."

Attorneys for the Greene family said relatives were initially told the man died from injuries sustained in a car crash following the long police chase that ended on a dark Union Parish road.

State Police released all known video evidence from the encounter last Friday, only after most of the footage had already been leaked to the Associated Press.

After details about how Greene died started coming to light last year, State Police arrested four Monroe-based troopers accused of using excessive force in two separate incidents, also involving Black suspects during traffic stops. The additional incidents have raised significant questions about cultural problems at Troop F, which is based in Monroe and patrols a dozen parishes in northeast Louisiana.

Attorneys and advocates are demanding to know why those cases have resulted in criminal charges while the Greene investigation has not.

"We're over two years. I don't know how I can say it any louder," said Mona Hardin, Greene's mother, speaking during a virtual media briefing Thursday morning. "It doesn't even seem rational to even speak any more of this because of what we know, what we have on hand. … We need someone to be arrested. We need them to be indicted."

Speaking on the Capitol steps, Hardin said she wants to see the governor show he has a heart. She said she hoped to convey that message to him.

Following his meeting with the Greene family Thursday afternoon, Edwards released a statement calling the actions of the troopers in this incident "deeply unprofessional and incredibly disturbing."

"The officers seen on the body cam footage of Mr. Greene's arrest do not represent what we aspire to in the state of Louisiana," he said. "I am disappointed in them and in any officer who stood by and did not intervene during the arrest.

"Law enforcement officers must hold themselves to the highest standards at all times. I certainly do."

Edwards also said he promised the grieving mother that "Louisiana State Police is cooperating fully with the Union Parish District Attorney and the U.S. Department of Justice in their investigations and that under the leadership of a new state police superintendent, change has already started at the agency."

"What happened was tragic, and I cannot imagine the immense pain of losing a child in such a terrible way," Edwards said. "Nothing can make up for the disturbing treatment he received at the hands of some state troopers."

Merritt said he met with John Belton, the Union Parish district attorney, earlier Thursday. Merritt said the prosecutor indicated arrest warrants would have to come from State Police themselves because the agency had not turned over the complete file to his office.

"We asked Mr. Belton quite frankly and quite directly: Was he ready for a judge to sign a warrant for the arrests of the men involved in the crimes?" Merritt said. "He indicated that the state police had still not turned over a complete file and that the State Police would be required to make an arrest. We simply reject that."

"However, we also are encouraging the governor's office and State Police to go ahead and make the arrest as a start on the path to justice," he added. "No one has made that commitment to us so far."

Given the lack of action, Merritt accused Louisiana leaders of having no taste for justice, saying they seem more committed to upholding a structure designed to keep Black communities oppressed.

When he heard about allegations that Louisiana State Police troopers had beaten a Black man to death and then tried to cover up their actions,…

Beyond pushing for arrests from an ongoing federal investigation, Morial argued for a broader federal review of the state's premier law enforcement agency.

He suggested the kind of "pattern or practice" investigations into local and state police agencies that Attorney General Jeff Sessions shelved in the early days of the Trump administration, but which President Joe Biden's administration has restarted.

Eugene Collins, NAACP Baton Rouge branch president, said the limited discipline that State Police thus far have handed down over the incident showed an agency that hasn't proven "the ability to do the right thing by themselves yet."

"Receiving 50 hours of discipline for dragging a man is just wild, to think somebody thought that was good enough," he said.

Some calls from advocates targeted Louisiana Attorney General Jeff Landry, arguing he should step in and enforce state laws. But Landry issued a statement Thursday afternoon saying that would violate the rules, unless the Union Parish district attorney recuses himself.

A Louisiana state police trooper who was recently arrested in three separate excessive force incidents resigned from the agency this week.