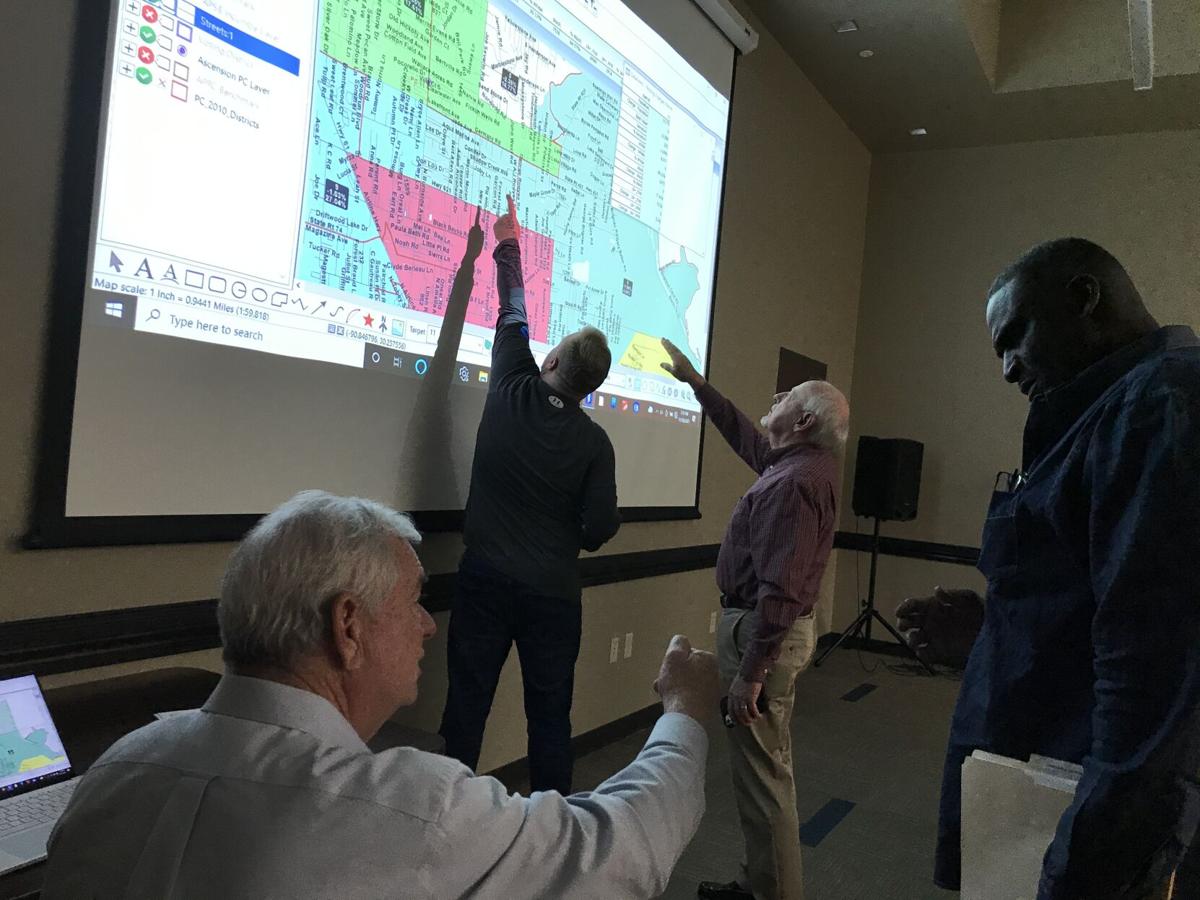 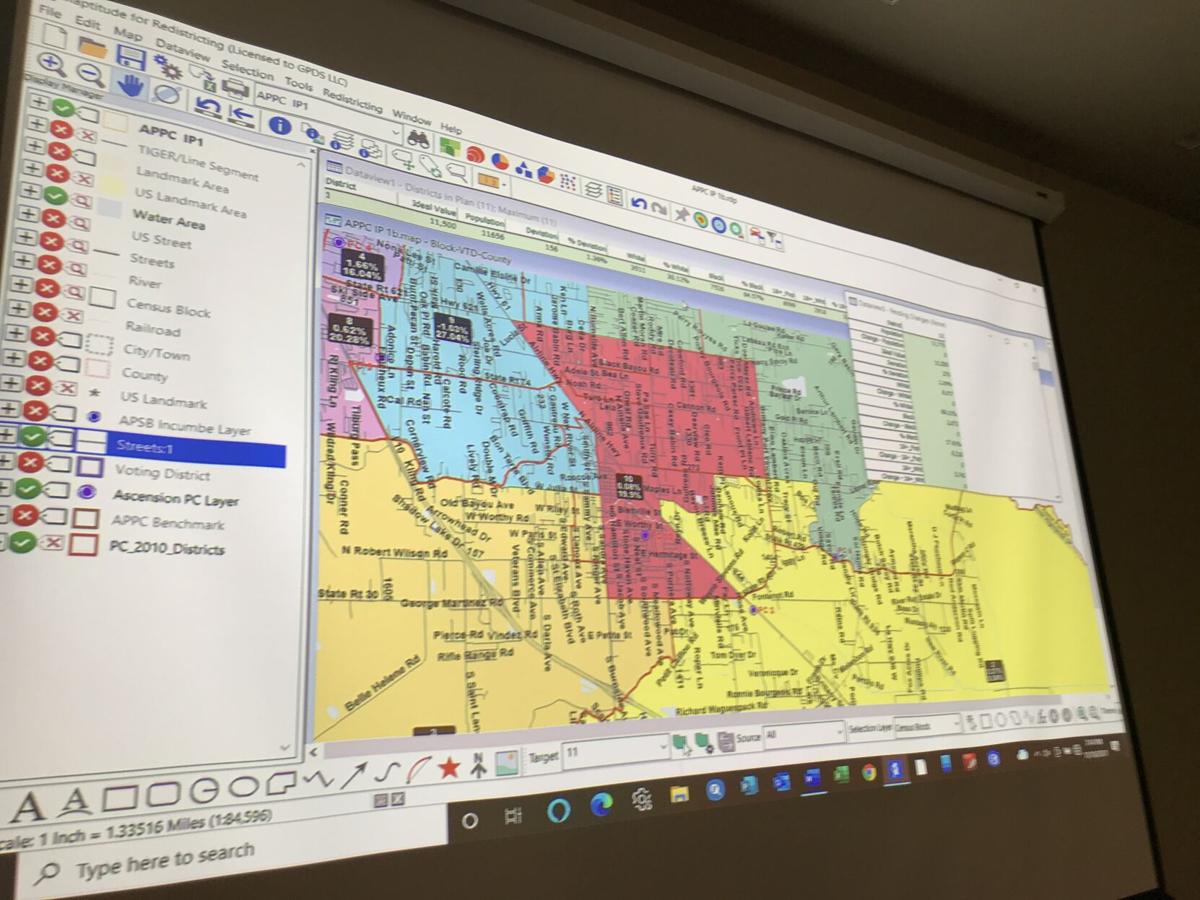 One proposed version of the new Ascension Parish Council district 9, 10 and 2 in blue, red and yellow are shown on a large screen Wednesday, Nov. 10, 2021, inside the Parish Governmental Complex in Gonzales. The redistricting effort is being driven by new 2020 census data that showed nearly 18% growth in the parish.

One proposed version of the new Ascension Parish Council district 9, 10 and 2 in blue, red and yellow are shown on a large screen Wednesday, Nov. 10, 2021, inside the Parish Governmental Complex in Gonzales. The redistricting effort is being driven by new 2020 census data that showed nearly 18% growth in the parish.

Ascension Parish grew by nearly 18% over the past decade — the second most in Louisiana — but a first crack at devising new Parish Council election districts suggests they are not likely to change much.

Prairieville and Gonzales grew by around a quarter each, but neither area would gain an additional council seat under a first-draft redistricting plan hashed out this week.

Also, the west bank of the parish would still have two representatives, even though the city of Donaldsonville saw its population drop by nearly 10% over the same period.

The proposal, which is expected to go through additional adjustments and public workshops before any final vote, also preserves the parish's two minority-majority districts and keeps each of the council's 11 incumbents in their existing districts.

But in one major proposed change, Council District 2, now held by Joel Robert, would no longer represent the west bank of Ascension. That area would instead go into Council District 8, currently represented by Teri Casso of Dutchtown.

Whatever the council eventually decides, the new district lines won't be in play until the fall 2023 elections for the new council.

The Ascension Parish School Board has a new assignment after new census data show the parish grew by more than 18,000 residents in the last 10…

Every 10 years, new census results prompt mandated adjustments to local government district boundaries. With the 2020 results made public earlier this year, the council started that effort in an informal, public workshop with demographer Mike Hefner on Wednesday at the government complex in Gonzales.

Hefner, who is also working with the parish School Board, came in with a preliminary plan that council members began taking turns tweaking as they stared at a map of the proposed council districts projected on a large screen.

Hefner explained that the creation of council districts had to abide by some guidelines to comply with federal voting rights requirements and avoid future court challenges.

Council district populations generally should have no more than a 5% deviation — either more or less — from the new average district population of 11,500 people. In some special cases, districts could be off by up to 7%, maybe 8%, he said.

"It goes back to one man, one vote, which is kind of the primary purpose of redistricting anyway," Hefner said. "Each of y'all needs to be representing approximately the same number of people so your votes have equal weight on the council."

Core council districts should generally retain their shape. Also, minority-majority districts should have minority populations, in this case African-American, that are at least a 55% but closer to 60% share of the district, depending on voter turnout rates, Hefner said.

During the 2010 census, redistricting plans in the South where there had been a history of segregation, including in Louisiana, needed preclearance from the U.S. Department of Justice to ensure plans complied with the Voting Rights Act and gave minority voters a voice.

In 2010, the Justice Department cleared the council's two-minority district plan -- around 18% of the 11-member council -- but Black residents' share of Ascension's population has risen from 22% to 24% over the past decade. Three council seats would represent 27% of the council.

In 2013, the U.S. Supreme Court declared provisions of the historic, mid-1960s law that brought the franchise to many African-Americans unconstitutional, effectively ending preclearance for most jurisdictions in the South. Other provisions of the federal law remain in place to protect voting rights and shape redistricting decisions.

Due to the population losses on the west bank, Hefner's initial plan had cut its representation from two seats to one, Thomas' Council District 1.

"I really think, that for the west bank to have proportionate representation on the east bank, in fairness, it needs to two districts," Casso said. "You're talking about watering down the effect of representation of the west bank in a dramatic way, when you go from two councilmen to one."

Also, Councilman Dal Waguespack wanted to see the three council districts in the center of eastern Ascension and generally north of Gonzales -- Districts 9, 10 and 11 -- use Airline Highway as a boundary and have more squared off shapes.

The districts are now kind of jagged and stacked on top of one other, like misshapen pancakes covering both sides of Airline, a major thoroughfare in the parish.

Waguespack, of District 9, and Councilman Michael Mason, of District 11, said residents are often unsure which district they live in.

"Our districts are so convoluted, it confuses people," Waguespack said.

But, the tweaking to try to meet Waguespack's request, like falling dominoes, set off a series of attempts to make adjustments by taking and adding areas to and from surrounding districts, so all the districts met basic population marks.

Trying to account for the irregular shapes of precincts and census blocks — the minimum building blocks for redistricting — the councilmen settled on new shapes that were roughly more compact than the existing districts and somewhat hewed to Airline as a boundary.

Hefner and the council members faced other constraints in trying to add back a second council seat on the west bank.

Due to declining population, Thomas's Council District 1 has the second largest deviation from the new 11,500-person average. After the latest census, the district is 15% below the target population and needs to add more than 1,760 people, Hefner's calculations show.

Hefner had to stretch District 1, which is now entirely on the west bank, across the river and into the southern parts of eastern Ascension in the Burnside area to get its population higher.

Under his proposal, District 1 would include areas south of La. 941 and east of La. 44 to I-10 and the parish line but exclude the city limits of Sorrento.

The changes also eliminated Councilman Joel Roberts's District 2 base on the west bank, leaving him Pelican Point, Sorrento and other parts of southeastern Ascension.

Robert wasn't present for the workshop this week; neither were Councilmen Aaron Lawler nor Corey Orgeron.

Thomas' council district is one of Ascension's two existing minority-majority districts. The Gonzales-area Council District 3, held by Councilman Travis Turner, is the other.

Hefner had contemplated shifting part of Turner's district across the river through Darrow, but Turner disagreed with having a second minority-majority district represent the west bank.

Instead, Hefner pulled part of Casso's Council District 8, which currently incorporates a heavily Republican and White part of Ascension around Dutchtown, to include part of the Modeste area upriver of Donaldsonville.

Covering a large but lightly populated area, the Modeste region has a smaller share of minority residents than other parts of the west bank, so shifting it to Casso's district didn't reduce minority numbers too significantly in Thomas' council district, Hefner said.

The first round of adjustments were finished after about two hours, but Hefner said he would make more fine-tuned tweaks and present a new copy of the proposed map sometime after Thanksgiving, so the council could discuss it again.