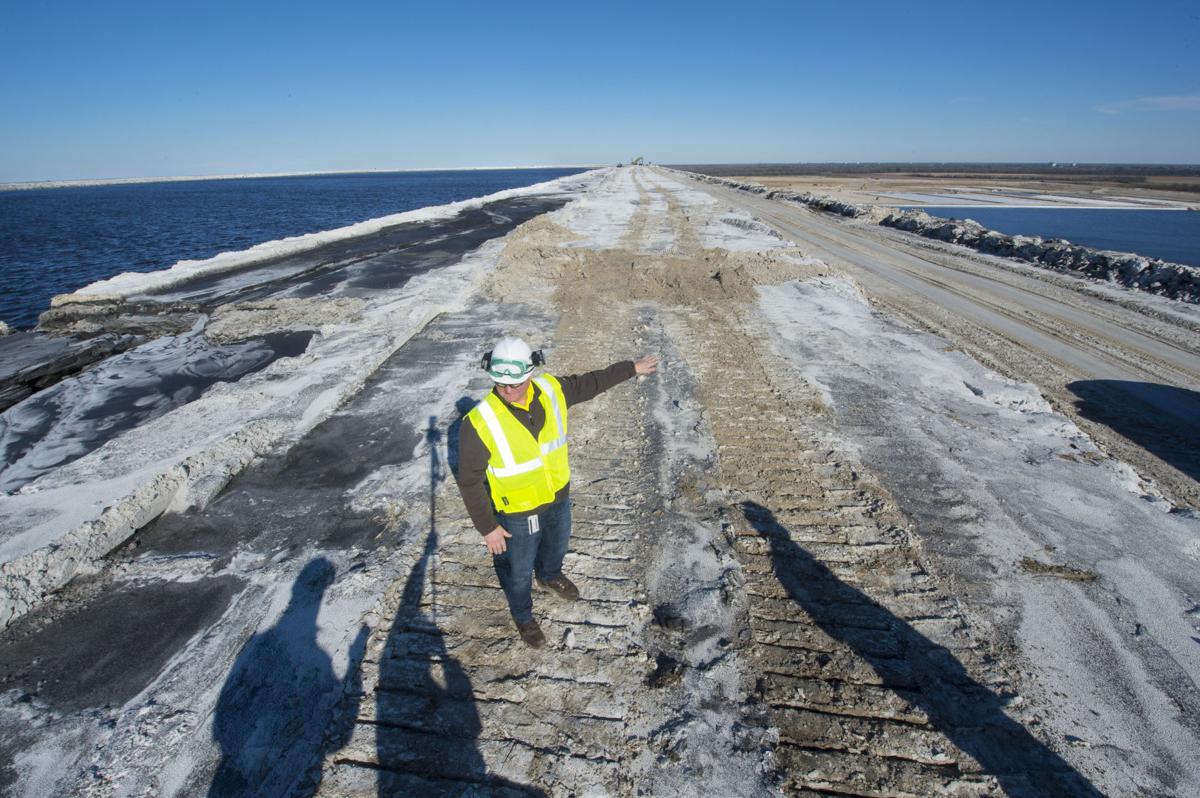 Ron Yasurek, Mosaic general manager of phosphate operations, stands Tuesday, Jan. 29, 2019, on a roadway atop an enormous, 200-foot-high pile of white waste material called phosphogypsum. The gypsum supports and encases giant cooling ponds for process water at the company's fertilizer complex in Convent next to the Mississippi River. The 140-acre pond on the left is at on top of the mountain of waste. The pond on the right is part of the same waste pile but at a significantly lower elevation than the pond on the left. 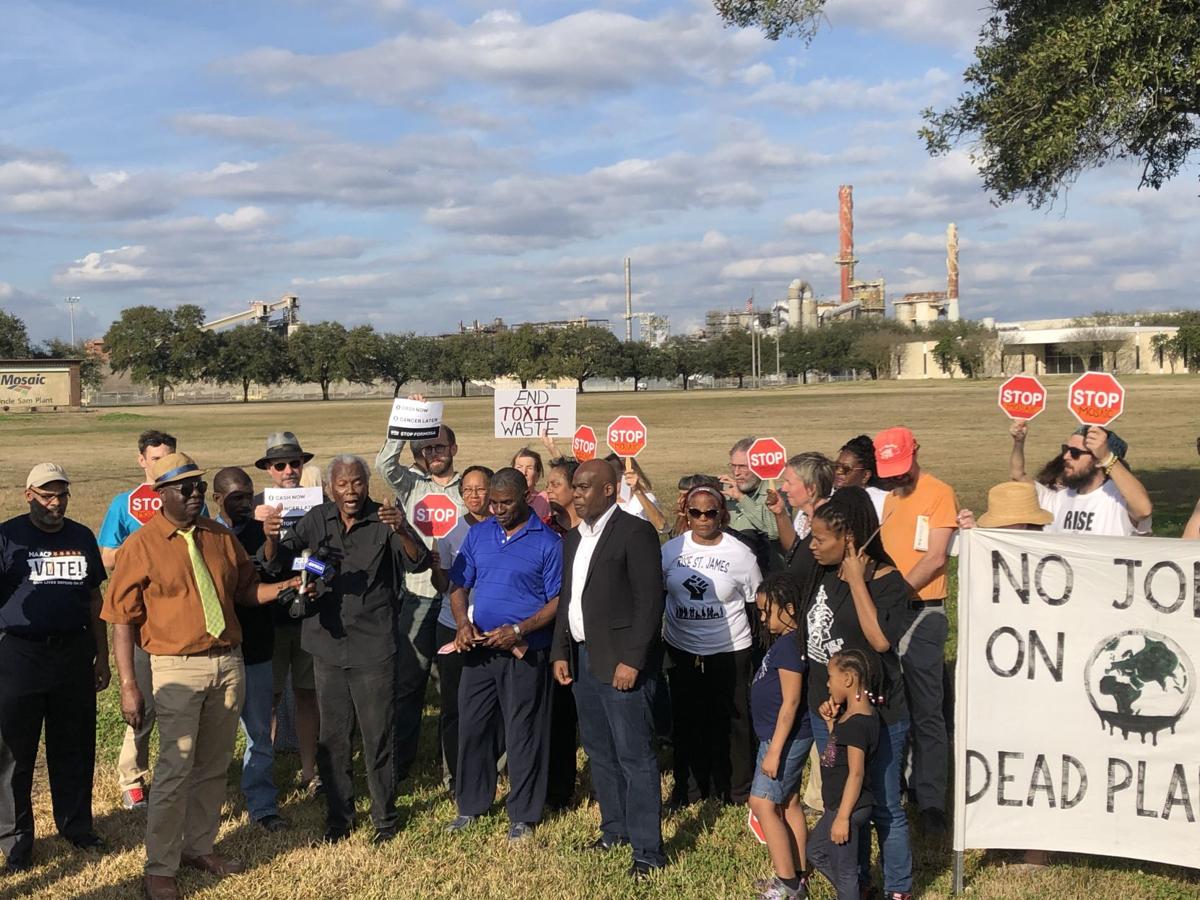 Ron Yasurek, Mosaic general manager of phosphate operations, stands Tuesday, Jan. 29, 2019, on a roadway atop an enormous, 200-foot-high pile of white waste material called phosphogypsum. The gypsum supports and encases giant cooling ponds for process water at the company's fertilizer complex in Convent next to the Mississippi River. The 140-acre pond on the left is at on top of the mountain of waste. The pond on the right is part of the same waste pile but at a significantly lower elevation than the pond on the left.

CONVENT — Shouting "shut it down" on the front lawn of Mosaic Fertilizer's administrative office, a collection of St. James Parish residents, outside environmental activists and pastors called Wednesday for the state to close the Uncle Sam plant with its endangered lake of hazardous water threatening surrounding land and waterways.

Company officials and state regulators have been scrambling for several weeks to prevent a catastrophic release of more than 700 million gallons of the acidic process water held inside an enormous lake atop a 200-foot high pile of the company's waste byproduct outside Convent.

What is gypsum? What you should know about this giant wall, its possible collapse in St. James

A potential environmental disaster might be looming in St. James Parish.

Mosaic officials said they realized at the turn of 2019 that the north face of the pile has been shifting since sometime in the spring and, as of Wednesday, continued moving about 0.6 of an inch per day, on average.

Dump trucks are working a 24-hour-per-day operation to haul in enough dirt to buttress the slipping gypsum wall while company workers try to drain the lake of process water and lessen the weight pressing on the moving wall.

The 25 to 30 activists charged Wednesday that the fertilizer company on River Road is part of a petrochemical complex along the Mississippi River that exposes poor and minority communities to health risks and contributes to global climate change.

"As Rise St. James and as the residents of St. James have said repeatedly, St. James is full, and nothing shows it more clearly than this facility that needs to be shut down now," said Anne Rolfes, director of the Louisiana Bucket Brigade. "You can't handle what you got, don't bring in any more."

Gail Leboeuf, a Convent resident who grew up near the pile, said she watched the plant being built and watched the pile rise higher and higher through the years.

And it could possibly go higher: Louisiana Department of Environmental Quality permit records show the company has in years past asked to bring the waste pile along La. 3125 and La. 3214 to a maximum of 300 feet high for the long term.

Mosaic, meanwhile, is planning to build up another, lower section of the nearly 960-acre pile to match the 200-foot height of the section containing the endangered lake. Those plans would allow the company to continue its production for another decade, but company officials have acknowledged the current emergency will force a re-evaluation of the waste pile's operations.

The waste pile is made up of phosphogypsum, a byproduct of Mosaic's production of phosphoric acid. The white powdery waste material, which can harden with time, has trace radioactivity and other contaminants and has had limited ability to be reused.

In a statement, the company emphasized its commitment to the environment and workplace safety, adding it has no plans to stop producing fertilizer that helps feed the world.

Closing Mosaic's Uncle Sam plant, company officials said, could affect the jobs of the 400 people employed there and at the Faustina plant also in St. James Parish, as well as slowing the removal of the process water pressing down on the slipping gypsum wall.

Environmental regulators are engaged in emergency mode in monitoring the stability of a large waste pile at a Mosaic Fertilizer plant in St. J…

In addition to efforts to drain the lake, the plant's production of phosphoric acid also consumes 1,100 gallons of water from the lake for every ton of acid created.

The reason the lake at the top of the waste pile even exists, company officials have said, is that it is an integral part of the acid's production loop. The lake and other ponds collect needed rainfall for the plant and also cool used process water returning from the plant. Yet, with each ton of acid created, that process also continues to add more gypsum to the waste pile.

DEQ officials have said a release of the lake water could threaten Blind River and the freshwater swamps that surround it. But on Wednesday, they noted Mosaic is trying to seal off and buttress a large cane field adjacent to the slipping north wall in case the field is needed to contain escaping water.