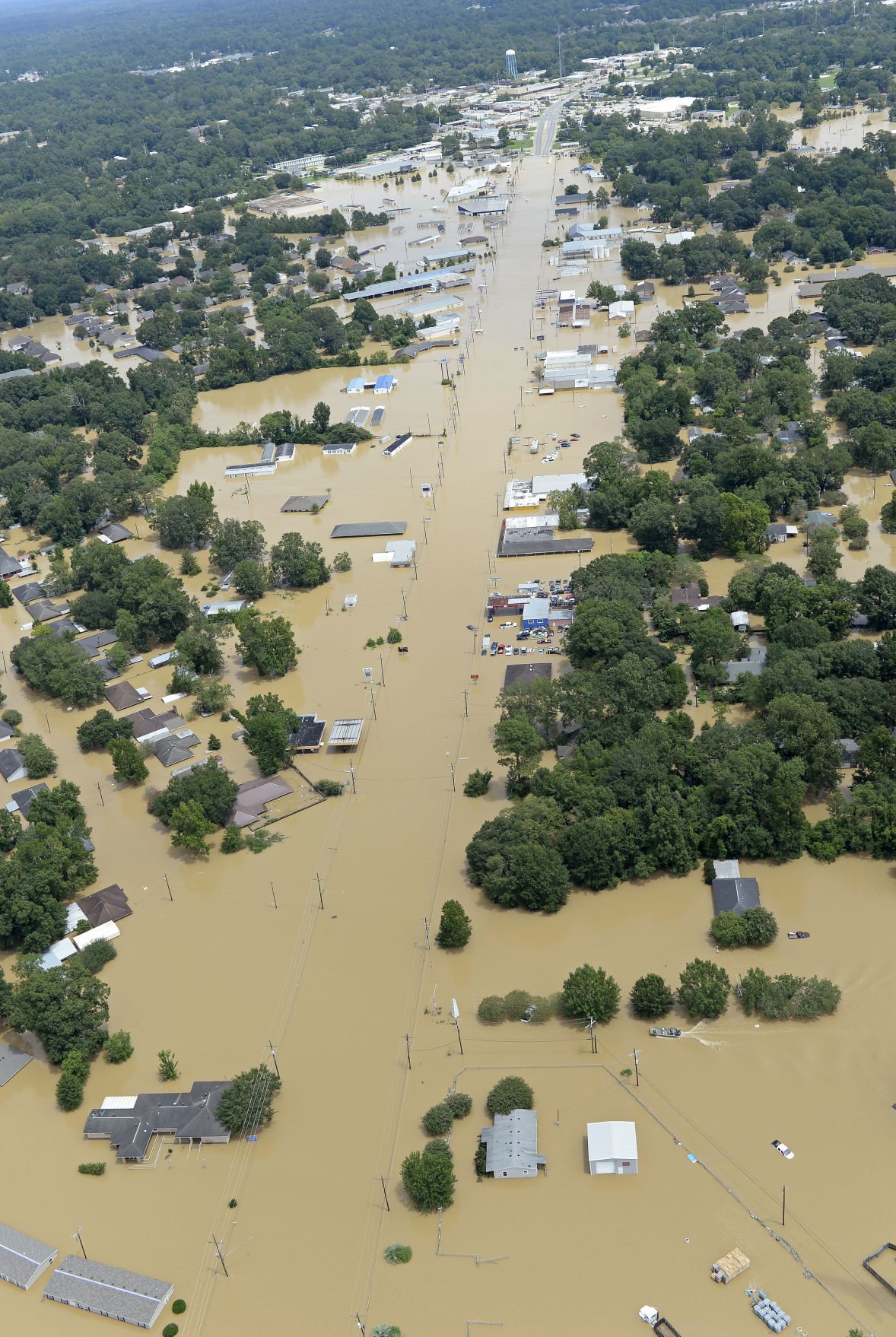 Houses and businesses take on water on a street in the Denham Springs area during severe flooding in Livingston Parish on Sunday August 14, 2016. 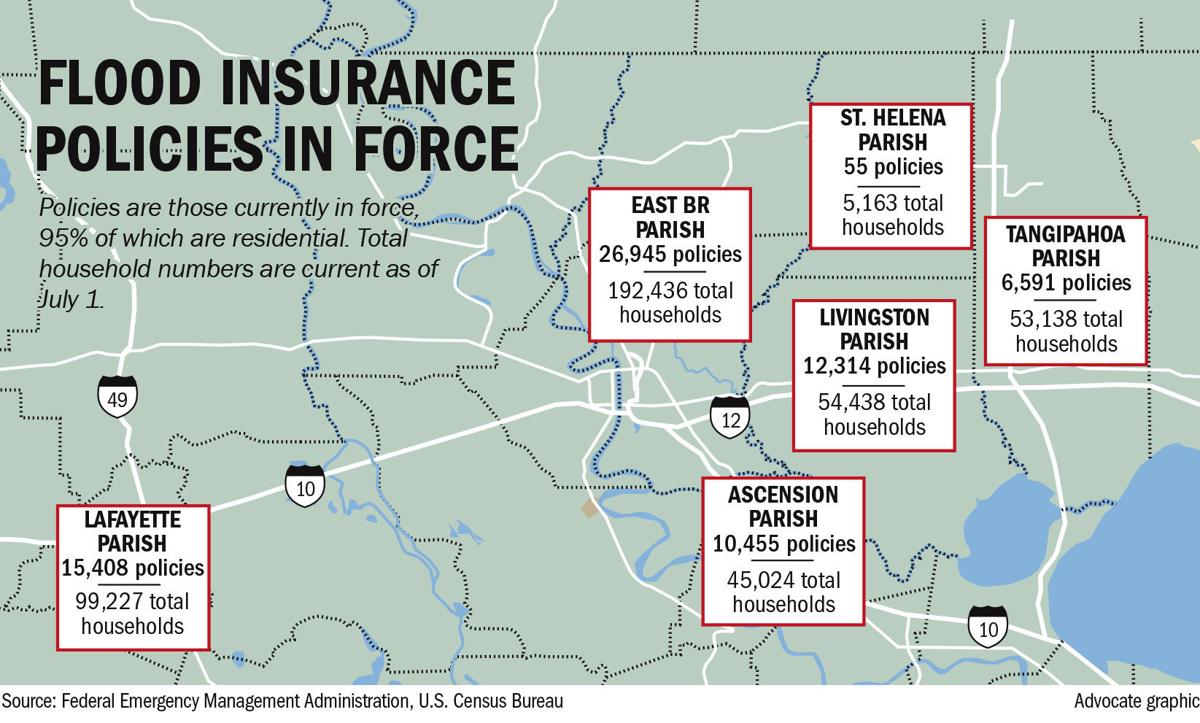 Only about one in eight businesses and residences in East Baton Rouge Parish is covered by flood insurance, a reality that is sure to take a financial toll on those living in the vast swaths of neighborhoods that flooded during this weekend’s storms.

The figures for the four parishes that have been declared a federal disaster area are the most recent available from the Federal Emergency Management Agency, which has announced a grant program that would provide up to $33,000 for anyone who flooded in that area and didn't live in a neighborhood where flood insurance was required.

While the number of people who fit that bill is expected to be high, it is not yet clear how high.

FEMA said it expects to get inspectors out as soon as Tuesday to begin assessing the damage to those homes, with the money to be available roughly 48 hours after inspections.

Romine-Ortega said the program is not intended to duplicate what a flood insurance policy would have provided, though the money can be used to help flood victims pay for temporary housing and replacement of household items and personal property, among other uses.

Anyone who thinks they may be eligible can register at disasterassistance.gov or (800) 621-3362.

Gov. John Bel Edwards urged residents outside of those four parishes who think they could qualify for disaster assistance to call the phone number in case the disaster declaration is expanded to other parishes.

Michael Barry, a spokesman for the Insurance Information Institute, cautioned that the amount of FEMA direct assistance most people receive is likely to be far less than the $33,000 maximum.

"I've seen presentations by FEMA public affairs professionals that when they want to manage the expectations when it comes to direct assistance, they often say, 'Depending upon the disaster, the typical payout's going to be in the $9,000 to $10,000 range,' " Barry said.

Those who should have flood insurance and don't -- often because they own their homes outright and there is no mortgage lender to demand it -- are usually left having to tap their own resources to rebuild.

The number of people in that category affected by the weekend floods appears to be high. In East Baton Rouge and Livingston, only about a third of homes in areas defined as "high risk" for flooding have flood insurance.

“It frankly is quite surprising to me, the lack of take-up of the flood program in the impacted areas," state Insurance Commissioner Jim Donelon said. "It shows quite clearly the sad state of affairs for those areas that are impacted.”

Statewide, Donelon said, the proportion of Louisianians with flood insurance is lower than he would have thought, given the state's history. “I thought it was 25 percent, but it’s 21 in the residential market, and it’s heavily concentrated in New Orleans, where 40 percent are insured against flood,” he said.

Donelon said the New Orleans metro area has the highest rates of flood insurance participation. When Hurricane Katrina struck the area, there were 360,000 business and residential flood insurance policies. That climbed to a peak of 500,000 by 2008 but has since fallen to 450,000, 340,000 of which are residential.

Insurance industry officials say the damage from the weekend's storms to areas not previously seen as flood risks should give people plenty of reason to reconsider the conventional wisdom about whether flood insurance is necessary.

Analysts expect the number will be even higher in this flood.

"Yeah, this is going to break that kind of a record in Louisiana for sure,” said Jeff Albright, chief executive officer of the Independent Insurance Agents and Brokers of Louisiana.

“There is no doubt we’re going to see an awful lot of folks (who flooded) who thought that they were high and dry,” Donelon said. “Maybe even the majority of the victims of this event were situated in low-risk areas -- or areas heretofore considered to be low-risk, I should say. They’re obviously not low-risk.”

This weekend, about 10 days after the furniture arrived, Ricks’ home took on 3 feet of water.

“There was no way to prepare,” Ricks said of people who live outside the floodplain and followed instructions to stay put because they were supposedly safe. “People had no time to get prepared and their furniture lifted, and basically people who didn’t have insurance, like us, lost everything.”

The way Albright sees it, people generally look at two things when they decide whether to buy flood insurance: One, is the bank making me buy it? And two, has this property flooded before?

"Everybody needs flood insurance," Albright said of the National Flood Insurance Program. "Why would you insure your house against fire and not against flood? In Louisiana, it's at least as big a risk as fire. If you’re outside (the floodplain), it’s incredibly inexpensive. It’s as low as $400 a year. And if you're inside the flood zone, it doesn’t matter how much it costs because sooner or later, you’re going to need it.”

In fact, Louisianians are far more apt to carry flood insurance than most Americans.

There are 452,000 flood insurance policyholders in Louisiana, behind only far more populous Florida and Texas.

Not only does Louisiana have the highest proportion of insured residents of any state, it has also gotten a far bigger benefit than any other state. Louisiana's $16 billion in claims paid out over the past 35 years is bigger than for the next three states -- New York, New Jersey and Texas -- combined. Of course, Hurricane Katrina was responsible for the lion's share of those claims, with Orleans Parish alone accounting for nearly half of the payouts.

Donelon and others agree that the historical guidelines typically used to make decisions about flood insurance are changing with each of the flooding events that have threatened property owners in the last couple of years, notably the floods that affected many parishes this spring.

Those kinds of storms "certainly do seem to be happening more often,” he said.

Up to 70 percent of Livingston Parish homes have flood damage, official estimates

Filing a flood insurance claim is a fairly straightforward process that starts with a call to your agent or insurance company.

Louisiana Lt. Gov. Billy Nungesser is settling into a new role — one that other state leaders say he's uniquely qualified for — as Louisiana p…